Accessibility links
'Green' With Anger Over Obama's Drilling Plan : It's All Politics POLITICAL JUNKIE: President Obama's decision to increase drilling for oil, off the coast of Virginia and perhaps elsewhere, is thought to have been made to win over GOP votes for his climate legislation languishing in Congress. But his environmen... 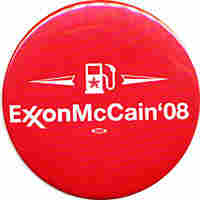 Environmentalists had nothing but contempt for the GOP platform in 2008. How will they react to today's Obama move on drilling? hide caption

One of the many issues that separated the Democratic and Republican national tickets in 2008 was the environment. The selection of Alaska Gov. Sarah Palin as John McCain's running mate, and the chants of "Drill, baby, drill" filling the Republican convention hall in St. Paul, drove environmentalists nuts. They responded with ridicule, exasperation and contempt. While Republicans argued that increased drilling for oil in the U.S. would result in lowering prices and weaning us away from the OPEC nations, enviros -- such as this posting at the time from the Environmental Defense Fund -- saw it differently:

Drilling will not reduce fuel prices, and will not make us more energy independent. The only way to achieve these goals is to reduce our dependence on oil -- foreign or domestic -- through fuel economy, and a cap on carbon emissions. A carbon cap will spur innovation and shift us into a green energy economy.

Dan Weiss, the former political director at the Sierra Club, wrote this in response to the selection of Palin as VP:

Palin is a champion for drilling, the Bush-Cheney approach to energy policy that brought us $4.00-per-gallon gasoline and the rising threat of global warming.

Like McCain, Palin believes that oil drilling is the only solution to our energy problems. "I beg to disagree with any candidate who would say we can't drill our way out of our problem," she says. She supports more drilling in protected areas of the Outer Continental Shelf and the Alaska Natural Wildlife Refuge, once attacking McCain for his "close-mindedness on ANWR." ...

Sarah Palin has taken positions that would ensure a continuation of the Bush-Cheney energy policies. She supports drilling everywhere and ignores the need for binding reductions in global warming pollution even though her state is melting. The continuation of these policies will continue higher energy costs, more severe hurricanes and droughts, and despoiled natural treasures.

It's not that candidate Barack Obama promised an end to drilling. But there was no question where environmentalists stood in the 2008 presidential campaign.

Still, they were no doubt prepared for bad news, and some of it came today. Obama hinted during his State of the Union message that increased drilling was a real option. Today's speech, given at the Andrews Air Force Base in Maryland, had something for them to cheer about: for example, Obama ruled out drilling in Alaska's Bristol Bay, deciding instead to conduct an environmental study to see if such drilling could be defended.

But he did call for drilling on tracts 50 miles off the coast of Virginia, and increased drilling could follow off the Florida Gulf coast as well. It will be the first new drilling in the Atlantic in decades.

In his speech this morning, Obama said that this was "not a decision that I've made lightly":

But the bottom line is this: given our energy needs, in order to sustain economic growth, produce jobs, and keep our businesses competitive, we're going to need to harness traditional sources of fuel even as we ramp up production of new sources of renewable, homegrown energy.

Much of the speculation for the administration's reasoning has been on the need to get Republican votes for Obama's climate legislation. Sens. John Kerry (D-MA), Lindsey Graham (R-SC) and Joe Lieberman (I-CT) are trying to hammer out a bipartisan climate bill, but Graham is getting no GOP backing on this, and Graham himself has said that he couldn't support a bill that "doesn't have off-shore drilling in a meaningful way."

The New York Times' John Broder writes that today's proposal by Obama could "help win political support for comprehensive energy and climate legislation," but at the same time, "the sheer breadth of the offshore drilling decision will take some of his supporters aback. And it is no sure thing that it will win support for a climate bill from undecided senators close to the oil industry," such as Lisa Murkowski (R-AK) or Mary Landrieu (D-LA).

If the president was expecting an unfavorable reaction from environmentalist groups, he is unlikely to be disappointed.
Kevin Drum of Mother Jones doesn't understand the president's strategy:

Here's what I don't get. When it comes to energy, conservatives are crazy about two things: nuclear power and offshore drilling. Now Obama has agreed to both. But does he seriously think this will "help win political support for comprehensive energy and climate legislation"? Wouldn't he be better off holding this stuff in reserve and negotiating it away in return for actual support, not just hoped-for support? What am I missing here?

A more resigned Monica Potts blogs at The American Prospect:

It's not like Obama said he didn't support off-shore-drilling expansion as a candidate, but this announcement is still a disappointment. The gains are likely to be small, the risks are huge, and it puts politics over evidence.

But conservatives are unlikely to be pleased either. Rep. Mike Pence (R-IN) wasn't buying the Obama argument:

The President's announcement today is a smokescreen. It will almost certainly delay any new offshore exploration until at least 2012 and include only a fraction of the offshore resources that the previous Administration included in its plan.

Unfortunately, this is yet another feeble attempt to gain votes for the President's national energy tax bill that is languishing in the Senate. At the end of the day this Administration's energy plan is simple: increase the cost of energy on every family in America and trade American jobs oversees at a time when millions of Americans are looking for work.

And Moe Lane, blogging at RedState, was equally dismissive:

The White House is implying the promise of jam tomorrow - in reality, it's just a study to revisit the denial of jam yesterday - in exchange for jam today. Only the jam today is actually a swarm of angry wasps. Try again, Mr. President. Start with rescinding your interference with the Bush drilling permits, and expect to give up more. A lot more: your opponents are not interested in indulging the Greenies' quaint, somewhat primitive religious sensibilities.