Accessibility links
Hoyer Takes D.C. Voting Rights Off House Sked : It's All Politics A bill to give the District of Columbia voting rights is expected to reach the House floor this week. But there are controversies over language that would strip many D.C. gun control measures from the bill. 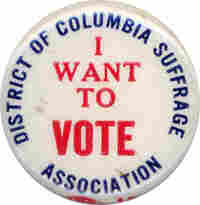 The issue, District of Columbia residents will forever tell you, is taxation without representation.

People who live in the nation's capital -- at least most of them anyway -- pay their taxes.  But they don't have voting representation in Congress.  They do get three electoral votes in the race for president.  But there is nobody for them in the Senate, and in the House, there is a delegate who can vote in committee or on procedural matters that don't involve a final vote but cannot vote on the floor.

With a Democratic Congress and a Democratic president, a bill giving the District voting rights was about to reach the House floor, perhaps as early as tomorrow.

And what follows is what I wrote about the history of the bill leading to this point.

But now comes this update just released by the Washington Post, sent minutes after I wrote up the issue:

No further details as of yet.  Until then, you can read all this stuff I just wrote that suddenly became obsolete.  Or, you can ignore it:

The bill, which was passed by the Senate last year, includes a measure that would eliminate many of the District's gun-control laws, including the ban on semiautomatic weapons; the inclusion was sponsored by Sen. John Ensign (R-NV) and backed by Majority Leader Harry Reid.

To many D.C. groups at the forefront of the battle to get voting rights, this is unacceptable; yesterday, the League of Women Voters and D.C. For Democracy, pulled back their support of the measure.  The Washington Post is reporting that D.C. Council chair Vincent Gray, who is challenging Mayor Adrian Fenty in the September Democratic primary, says the gun amendment was "too high of price to pay" for getting a vote in Congress.  House Majority Leader Steny Hoyer (D-MD) has been trying to convince the D.C. delegate, Eleanor Holmes Norton (D), that a faulty bill is better than no bill at all.  She seems to be backing that view.

Adding a seat for D.C. means a certain additional Democratic vote in the House.  The District is overwhelmingly Democratic, and the two delegates elected since its inception (Walter Fauntroy 1971-90 and Norton since then) win overwhelmingly.  In order to get Republicans on board, congressional leaders decided to add a fourth House seat in Utah, which is overwhelmingly Republican.

But there's a catch on that as well.  The Senate bill carves out a new district in Utah; the House bill says the Utah district is to be elected at-large (statewide).  Utah Sen. Orrin Hatch, one of six Republicans who voted for the bill last year, says he will filibuster if it includes the House language on the Utah seat.  (House Dem leaders say the Utah seat would only be temporarily at-large, that it would revert to a regular district once the new census provides more information for reapportionment.)

Speaking of the D.C./Utah trade, reader John Jackson Miller of Scandinavia, Wisc., had this comment:

I cant understand why, strategically, there are any GOP representatives lining up against it.

Since the 23rd Amendment has already provided D.C. three electoral votes regardless of the House move, it strikes me that the net practical effect of the move is to give the GOP one more electoral vote. The electoral college would grow to 539, not 540, right? D.C. already has its electoral vote for the representative being proposed (although still not the right to help break an electoral college tie -- which I guess going to 539 now makes less likely than before).

Looking at the politics, it already seems counterintuitive that the Dems would in effect give a free electoral vote to the GOP -- but its very odd indeed for the GOP to be fighting it.

The GOP argument seems to be less about the electoral votes than it does about D.C. getting a vote in Congress when it is not a state, and I would expect there to be a constitutional argument over the issue should it pass.  Plus, Republicans say that the 2010 census is likely to give them an additional seat in Utah regardless, so why agree to one for D.C. as well?

UPDATE:  I'll further update this post with reaction as warranted.