Accessibility links
Top Ten Senate Primaries For 2010 : It's All Politics Here is my list of the top 10 Senate primaries in this 2010 campaign season, beginning with the most closely watched primary this year: the GOP slugfest in Florida. 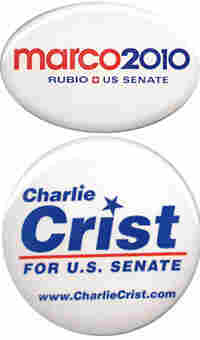 The most closely watched primary this year is clearly the GOP slugfest taking place in Florida. hide caption

Not much happening on the primary front this month -- there's nothing on the congressional calendar except for a pair of Republican House runoffs in Texas, against Democratic incumbents Chet Edwards (17th CD) and Ciro Rodriguez (23rd CD), and the special election in Florida's 19th to replace Rep. Robert Wexler (D). That's all taking place on April 13.

But this quiet time won't last long, as ten states hold primaries in May and another 14 vote in June. As we gear up for those dates, here is my list of the top 10 Senate primaries in this 2010 campaign season:

(1) FLORIDA REPUBLICAN (Aug. 24): If there was ever a case study made for why the media should be barred from designating a candidate the "frontrunner" a year in advance of the vote, this is it. Gov. Charlie Crist, whose approval ratings were at the time sky high, was by all accounts going to be the successor to retiring GOP Sen. Mel Martinez. (Martinez has since resigned, and Crist appointed George LeMieux, a close ally, to fill the seat.) For all the good reviews he has received as governor, Crist has never been a favorite of Sunshine State conservatives -- certainly not the way Jeb Bush was/is -- but their ambivalence turned to disgust when he embraced President Obama's stimulus package last year, and even appeared to (treason, I say!) hug the president (see Feb. 11 Political Junkie post on the "hug"). That was about all Marco Rubio, the young former state House speaker and a conservative former longshot, needed to make this a race. In fact, unless Crist can apply the brakes to his plummeting numbers, it won't be a race -- Rubio holds significant leads in every poll. Last week's debate on Fox didn't seem to change the narrative at all; the only headline that came out of it, according to some reports, is that Crist pledged not to drop out of the primary contest and run as an independent. And that's not the kind of headline the Crist camp was hoping to see.

(2) ARKANSAS DEMOCRATIC (May 18): It once appeared that the thing standing in the way of a third term for Sen. Blanche Lincoln was the eventual Republican nominee. There is a GOP surge taking place in Arkansas, even more so than we saw in 2008, when John McCain took 59 percent of the vote; I suspect that if the presidential race were re-run today, McCain would win by a greater margin. And it's not that Arkansas is a GOP bastion; only one Republican, Tim Hutchinson, has been elected to the Senate since Reconstruction. But President Obama and his policies remain unpopular in the state, and that has energized the right. At the same time, as the party is energized in the Razorback State, Democrats are split. Concerned about her prospects for re-election, Lincoln has been a thorn in her party's efforts to pass health care legislation, saying at one point that she would oppose the bill if the public option were included. While she eventually voted yes, her hesitation drove Democrats nuts, especially progressives, who vowed to challenge her in the primary. They came up with Bill Halter, the state's lt. gov., who has the enthusiastic support from union, environmental and lefty groups around the country, notably the AFL-CIO, MoveOn.org and the Daily Kos. It's debatable how significant the support of the left will be in a state like Arkansas, but there's no question that it brings Halter money, enabling him to go up on the air early. And the backing of labor groups could prove decisive. Lincoln might be able to make the case that by being targeted from the right AND the left, she is firmly in the center, along with most Arkansas voters. And right now, at least, polls show her clearly in the lead. But if Democratic anger at her caution and, well, moderation continues, she could find herself out of a job come the primary -- or severely damaged for her November faceoff with the Republican nominee.

(3) KENTUCKY REPUBLICAN (May 18): Republican fears about holding this seat seemed to go away last July, when embattled (and cantankerous) GOP Sen. Jim Bunning announced his retirement. Bunning, narrowly re-elected to a second term in 2004, had trouble with fundraising, and his relationship with fellow Bluegrass State Republican Sen. Mitch McConnell and many in his party was awful. With Bunning out, the GOP establishment then came up with Trey Grayson, the secretary of state, and party leaders breathed a sigh of relief. But Grayson has found himself in an increasingly tough battle with Rand Paul, an opthalmologist and son of Texas congressman Ron Paul who has benefited by the passion of Tea Party backers. He has also emulated his father's ability to raise a ton of money on-line. Rand Paul has also become a national conservative cause celebre, with Sarah Palin, among others, making a much ballyhooed endorsement. Grayson is also a committed conservative and has been no slouch in the fundraising department. But if the primary is going to be determined by passion, Paul might have an edge. Some Republicans I've spoken to insist that Grayson would have the better shot in November of holding the seat for the GOP. But it is premature to gauge how strong Paul would or would not be in the general election should he win the primary.

(4) UTAH REPUBLICAN (June 22): There is no question that no matter who wins the GOP nomination, Republicans will keep the seat in November. After all, they haven't lost a Senate race here since 1970. But that Republican may not be Bob Bennett, a three-term conservative who -- only in a state like Utah -- is still at pains to prove he is a true conservative. What happened to conservative GOP Rep. Chris Cannon two years ago -- he was defeated in the primary by an even more conservative Jason Chaffetz -- could happen to Bennett, who voted for the TARP bailout and has a propensity (gasp!) for working across the aisle. While June 22 is the date of the primary, the key date is more likely May 8, when the party holds its state nominating convention. If early caucus results are any kind of signal, Bennett is at risk of falling short of the nomination, most likely to Mike Lee, a former clerk to Supreme Court Justice Samuel Alito. If Bennett can't get sufficient support at the state convention, he won't be allowed to participate in the primary.

(5) COLORADO DEMOCRATIC (Aug. 10): Here's what Michael Bennet has in common with New York's Kirsten Gillibrand: Both were appointed to their Senate seats (to fill vacancies caused by the respective Cabinet-bound Ken Salazar and Hillary Clinton), and both have been strongly endorsed for a full term by the White House. But unlike Gillibrand's situation, Bennet has not been able to get out of a intra-party contest to keep his seat. Andrew Romanoff, the former state House speaker who had hoped to get the Senate appointment from Gov. Bill Ritter, jumped into the primary and is getting backing from the more liberal elements of the party. There are still some Democrats mystified why Bennet was picked instead of Romanoff, and the resulting furor may have been one reason why Gov. Ritter opted not to run for re-election.

(6) ARIZONA REPUBLICAN (Aug. 24): For all the complaints we've long been hearing from conservatives about John McCain and his ideological apostasies, this is the first time in his 24-year Senate career that he is facing a significant primary challenge from the right. Former Rep. J.D. Hayworth, ousted from office in the 2006 Democratic sweep, is banking on Tea Party backing for his argument that McCain is no conservative, if not a RINO. Hayworth is an imperfect messenger; his association with convicted lobbyist Jack Abramoff contributed to his '06 defeat. But McCain is not taking the challenge lightly, and last week brought in Sarah Palin, his vice presidential running mate, on his behalf. She drew a huge crowd at a fairgrounds in Tucson, but it seemed clear from those attending that many were there to see her, and not him.

(7) PENNSYLVANIA DEMOCRATIC (May 18): The solution seemed simple to Arlen Specter. A likely loser in his bid for the Republican nomination against ex-Rep. Pat Toomey, whom he barely beat in the 2004 primary, Specter decided last April to quit the GOP and become a Democrat. The decision made electoral sense; many of the moderate Republicans in the Pennsylvania GOP who had voted for Specter for five terms left the party in 2008 and embraced Obama and the Democrats. For Specter to survive, he knew he had to get past the primary, and he wasn't going to do it as a Republican and against Toomey. When Specter switched, he received immediate backing from Obama and Gov. Ed Rendell. Some progressive Democrats, still peeved at Specter over his grilling of Anita Hill during the Clarence Thomas Supreme Court confirmation hearings, his coziness with President Bush on key votes, and, well, for being Arlen Specter, decided they had enough. They lined up behind Rep. Joe Sestak, a two-term liberal. But even at 80 years of age, there are still few who can campaign with the energy Specter has.

(8) KENTUCKY DEMOCRATIC (May 18): The GOP battle in the race to succeed retiring Republican Jim Bunning has gotten most of the ink, but there is also a lot at stake on the Democratic side. Both state Attorney General Jack Conway and Lt. Gov. Dan Mongiardo got in the race when it looked like Bunning would still run. And because Bunning was seen as so vulnerable, Conway and Mongiardo pulled out all the stops and took off the gloves, knocking each other silly, knowing that whoever won the primary had a good shot at victory in November. Lately, however, they have been working on revving up their supporters rather than tearing down each other. Mongiardo, having run statewide twice -- for LG and against Bunning six years ago -- leads in the polls, but Conway has more money and sources in Kentucky say he would be the stronger candidate in November.

(9) CALIFORNIA REPUBLICAN (June 8): Barbara Boxer, the three-term Democratic incumbent, was never on anyone's watch list this year -- even if Republicans detest her. Recent polls, however, show her with some degree of vulnerability. But for the GOP to defeat her in November, they are going to have to unite behind a candidate, and that could prove difficult. We've long chronicled in this space the unorthodox campaign being run by Carly Fiorina, the first time candidate and former Hewlett Packard CEO. She's running neck and neck with ex-Rep. Tom Campbell, who is pro-choice and pro-same sex marriage, two positions you don't often associate with Republican candidates ... at least those Republican candidates who hope to win the primary and unify the party in November. The true blue conservative in the race, state Assemblyman Chuck DeVore, trails in single digits in most polls.

(10) NEVADA REPUBLICAN (June 8): Senate Majority Leader Harry Reid (D) has been battered by poor polling numbers for the longest time. While well-funded, he constantly trails generic Republicans in nearly every survey. The problem for the GOP, however, is that generic Republicans don't win primaries; real Republicans do. And so far none of the Republican candidates have made a strong impression with the voters. The field of candidates includes former state GOP chair Sue Lowden, businessman Danny Tarkanian and ex-state Rep. Sharron Angle.