Nixon's decision to send troops to Cambodia was met with widespread protests on college campuses ... including Kent State. hide caption

I can't decide if the tragedy at Kent State University happened a long, long time ago, or it was just yesterday.  Probably both.  In any event, 40 years ago tomorrow, several members of the Ohio National Guard shot directly into a group of anti-war protesters.  Four people were killed; another nine were wounded.

It was not the only protest rally where people were killed that spring.  One week later, following a race riot in Augusta, Ga. -- which started out as a protest against police brutality and misconduct -- six unarmed black men were shot in the back by the police, and three days after that, two black students were killed at Jackson State by Mississippi Highway Patrol officers.

Also forever linked to the Kent State shootings is the governor of Ohio at the time, James Rhodes.

Rhodes was a moderate Republican and perhaps the most popular politician in the the state.  He certainly was the most dominant and a top vote-getter.  A former mayor of Columbus and later state auditor for a decade, Rhodes was elected governor in 1962 and re-elected four years later, promising -- and delivering on -- more jobs, an improved economy and no new taxes. 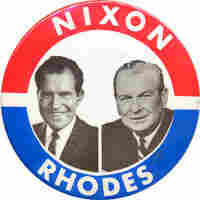 Rhodes was a potential running mate for Richard Nixon in 1968. hide caption

He never took a stand on national issues, and though he was suggested as a potential running mate for Richard Nixon in 1968, it was more about carrying Ohio in November than it was about Rhodes' views on Vietnam or civil unrest -- whatever they might have been -- two big issues in 1968.

But in 1970, Rhodes, who was barred from seeking a third term, had his eyes on an open Senate seat.  So did Rep. Robert Taft Jr., he of a famed Ohio political family.  When party leaders failed to convince Taft into running for governor as a part of a Rhodes-Taft "dream ticket," Rhodes began to attack Taft as being insufficiently pro-Nixon.  And he began to toughen his rhetoric about anti-war protesters.

On April 30, 1970, President Nixon announced on national television he was sending U.S. troops to Cambodia, a signficant expansion of the already-unpopular war in Vietnam.  Nixon's argument, that the Viet Cong were using Cambodia as a sanctuary, went unheeded on college campuses, which erupted with protests.  On May 1, a large anti-war rally was held at Kent State University, which began peacefully but escalated into violence between protesters and local police.  Kent Mayor Leroy Satrom asked Gov. Rhodes to send the National Guard to Kent State, fearful that his police would not be able to handle the situation.  Rhodes agreed.

As National Guard soldiers arrived, they witnessed the burning down of the ROTC building on campus.  Confrontations between the guardsmen and demonstrators were escalating.

By Sunday, May 3, some 1,000 National Guardsmen were on campus.  Rhodes flew to Kent that morning and denounced the protesters in the strongest language.  School officials, with Rhodes' backing, banned a protest rally scheduled for Monday, May 4.

As the Guard began to disperse the rally, protesters retreated.  The guardsmen followed them.  Some rocks were thrown at the Guard, but for the most part it was a peaceful, if tense, atmosphere.  Suddenly, a group of guardsmen fired their weapons.  Many fired into the air or the ground, but some fired directly into the crowd.  Four students were killed.

The next day, Tuesday, was primary day in Ohio.  Rhodes lost his bid for the GOP Senate nomination to Taft by some 3,000 votes out of more than 900,000 cast.  Was it because of Kent State?  The general consensus was no.

Rhodes had other things hanging over his head -- most notably a Life magazine article from 1969 that alleged he converted political funds for his own personal use and never reported the income. The piece also raised questions about Rhodes' decision to commute the prison sentence of a Toledo Mafia member.

Rhodes came back to win two more terms as governor.  In 1974, in the middle of the Watergate scandal, he upset Gov. John Gilligan, and in 1978, he defeated Dick Celeste, who was four years from winning the governorship on his own.  Both of Rhodes' victories were extremely narrow.  Rhodes was again term-limited in 1982; four years later, he ran again, this time getting trounced by Celeste.

In James Rhodes' long political career, it's hard to make the case that Kent State was a defining moment.  But, 40 years later, the events there remain a reminder of distrust between government and the people and an unpopular war that resulted in unnecessary deaths, both in Southeast Asia, and on the campuses of America.