Accessibility links
Buz Lukens, Conservative-Up-&-Comer-Turned-Embarrassment, Dies At 79 : It's All Politics Former Ohio Congressman Donald "Buz" Lukens," a once young conservative rising star who later went to prison for having sex with an underage girl, dies at age 79. 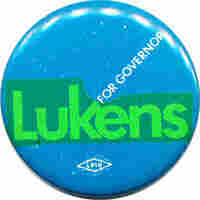 Lukens, who ran for governor of Ohio in 1970, went from the House to the Big House. hide caption

The photo that accompanied the obituary posted today on the Web site of The Hill, the Capitol Hill newspaper, is that of Rep. Jerry Lewis (R-CA), not Lukens.

I almost fell out of my chair on that one.

Back to Lukens.  There were, in fact, two Buz Lukenses.  The first was a young, fiery conservative, a strong supporter of Barry Goldwater, a dynamic campaigner with a limitless future, a can't miss up-and-comer who was elected to two terms in Congress from Ohio.  A favorite of the Right, he disappointed many of his followers when he gave up his House seat in an ill-fated run for governor in the 1970 GOP primary.  (Gone from Washington, he later served in the Ohio State Senate.)

The other was the Lukens who returned to Congress in 1986, after an absence of 16 years, whose career was going to end ignominiously.

In '86, Rep. Tom Kindness (R) gave up his House seat to run for the Senate, and Lukens pounced on the opportunity.  He won the seat handily, and was re-elected in 1988.

Lukens was back in Washington only two years when he was convicted in May 1989 for having sex with a 16-year old girl -- a relationship that reportedly began when the girl was 13.  (The details about the relationship, which I learned second-hand at the time, are far more lurid.)

House Republicans, furious at what they were hearing, insisted he resign, but he not only refused, he sought re-election in 1990.  Doomed from the start, he finished third in the primary to state Rep. John Boehner, the current House GOP leader.

As a lame-duck congressman, Lukens didn't fade into the sunset.  Later that fall he was accused of fondling a Capitol Hill elevator operator.  He resigned his seat on Oct. 24, 1990.

(See my Congressional Sex Scandals In History, which appeared on washingtonpost.com in 1998.)