Accessibility links
Where Did Alabama's Artur Davis Go Wrong? Let Us Count The Ways : It's All Politics Rep. Artur Davis had a sizable lead going into Tuesday's Democratic primary for governor of Alabama. And yet he lost.  Did Davis, in seeking out white support, take black voters for granted?

Where Did Alabama's Artur Davis Go Wrong? Let Us Count The Ways

Where Did Alabama's Artur Davis Go Wrong? Let Us Count The Ways 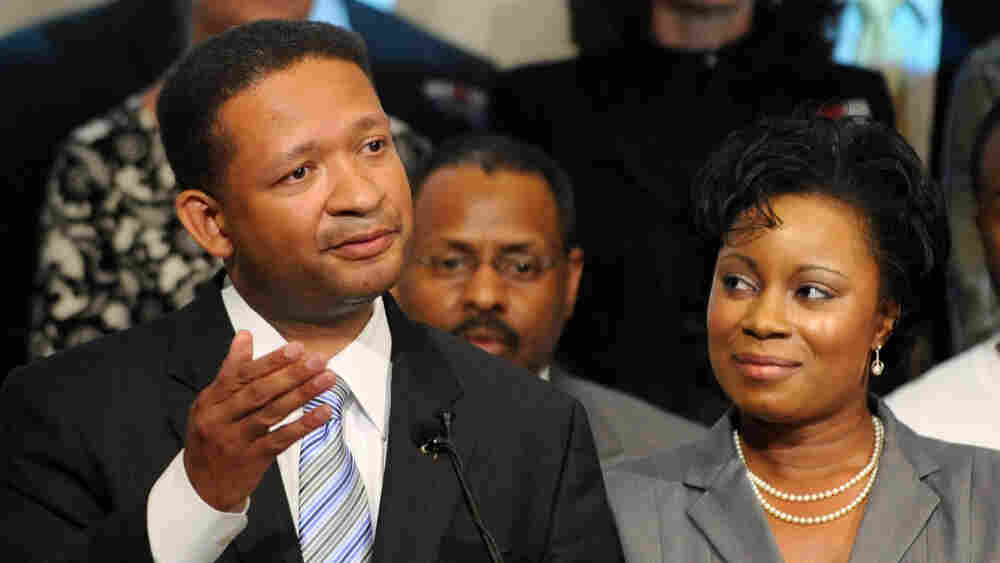 Rep. Artur Davis, with his wife Tara, concedes the Democratic gubernatorial race to Ron Sparks during a speech at the Harbert Center in Birmingham, Ala., on Tuesday. Mark Almond /Birmingham News/AP hide caption

It wasn't just that Rep. Artur Davis was defeated in his bid for the Democratic gubernatorial nomination in Tuesday's Alabama primary.  He got creamed.  He lost to state Agriculture Commissioner Ron Sparks by a 62 to 38 percent margin.

But every poll had Davis ahead, some by large margins, and that leads to wondering what happened.  Immediately coming to mind are questions about the so-called "Bradley Effect" -- referring to the 1982 gubernatorial race in California, where polls uniformly showed Los Angeles Mayor Tom Bradley, an African-American Democrat, leading state Attorney General George Deukmejian, his white Republican opponent -- a race that Deukmejian ultimately won.  Did voters tell pollsters, then and now, that they intended to vote for a black candidate but in the privacy of the voting booth do the opposite?

That seems too simplistic.  Here's another theory:  The strategy of the Davis campaign was wrong from Day One.  Sure, it's not easy for a black candidate to run in the state that gave us George Wallace.  But Davis seemed to go after white support without even giving a nod to the state's influential black power brokers.  Plus, he endorsed a whole lot of conservative-like positions during his eight years in Congress, such as supporting a constitutional amendment to ban same-sex marriage, voting against a bill to prohibit workplace discrimination against gays, voting for a ban on partial birth abortion, backing a renewal of the Patriot Act, and voting to allow oil and gas drilling in the Arctic Refuge in Alaska.

In addition, last year he was the only black member of Congress to vote against the health care bill -- a decision that didn't go over well with everyone on his staff, let alone with the citizens of his impoverished 7th Congressional District.  The Rev. Jesse Jackson even said, "You can't vote against health care and call yourself a black man."

And by trying to appeal to a basically conservative electorate, Davis either took for granted or simply ignored the black political establishment ... specifically, Joe Reed, the longtime black powerbroker who chairs the Alabama Democratic Conference.  Reed and three other organizations ultimately endorsed Sparks.

Here's how Ed Kilgore over at FiveThirtyEight saw it:

Sparks seems to have beaten Davis by pulling a significant (perhaps 40% or more) minority of African-American voters while trouncing him among white voters. Sparks carried Jefferson County (Birmingham) handily, although Davis represents a big chunk of the county, and ran well even in majority-African-American counties in or near Davis' district. The CW tomorrow will probably be that Davis thought far too much about positioning himself for the general election before concentrating on the primary, and that Sparks' uncontested claim on endorsements by African-American political groups was a big deal after all. It didn't hurt that the winner also got considerable help from the Alabama Education Association, the big dog in Alabama Democratic politics, and had a substantive issue--a state lottery--that's always played well with Alabama Democrats, particularly black voters.

First Read, the tipsheet from NBC News, offered this:

Davis voted against health care -- maybe a good position in Alabama in a general election, but a tough one to get around in a Democratic primary when half the electorate is black and so is the president of the United States. Davis' defeat is a good lesson for any African American or Hispanic politician who thinks they automatically will get support based on skin color or ethnicity.

A harsher view, but probably no less accurate, came from Michael Fauntroy, writing in the Huffington Post blog under the header, "Artur Davis Dissed His Base and Paid the Price":

While Congressman Artur Davis's stunning loss ... was a sad turn for one Black man, it was a great moment for Black voters. It revealed a heightened level of political sophistication among Black primary voters who rejected Davis's "I-don't-need-to-spend-time-on-them-'cause-I-know-they'll-be-with-me" approach to campaigning. Black Alabamans did not simply genuflect before a polished Black candidate. He gave them nothing; they returned the favor. Davis has ambitiously positioned himself for higher office for some time. In so doing, he took his base for granted. That's the best way to lose an election.

Meanwhile, we still don't know the identity of the Republican nominee, nor do we know who made it into the July 13 runoff with Bradley Byrne, a former college chancellor who was backed by many of the same business groups that twice elected GOP Gov. Bob Riley, term limited this year.

As of this writing, state Rep. Robert Bentley and businessman Tim James are separated by just 208 votes for second place.  Bentley's strong showing in the primary was a surprise; some attribute his gains as a backlash to the animosity between Byrne and James.  Methinks that if Bentley makes it into the runoff, he could garner a sizable chunk of the votes that went to James and fourth-place finisher Roy Moore, both of whom saw Byrne as insufficiently conservative.