Accessibility links
Elections: The Midterms : It's All Politics A Super Tuesday, with primaries in 10 states, plus a special Senate primary runoff in Arkansas and a special House runoff in Georgia.  One endangered incumbent to watch: Sen. Blanche Lincoln (D) in Arkansas.

Everything You Need To Know About Super Tuesday

Everything You Need To Know About Super Tuesday

Two-term Sen. Blanche Lincoln is in serious danger of losing her seat to Lt. Gov. Bill Halter in the Democratic primary runoff. The runoff was necessitated when neither candidate received a majority of the vote in the May 18 three-way primary, which Lincoln led by just two percentage points. Lincoln, accused by the right for being too liberal for Arkansas, has been under attack as well by the left, and labor unions, for her "centrism" -- specifically, her refusal to support a public option during the health care battle and her opposition to the Employee Free Choice Act ("card check"). Unions, such as the SEIU, have spent some $5 million (or more) to defeat Lincoln, saying that officials who receive labor support must be held accountable for their votes. The White House, and Arkansas' favorite son Bill Clinton, are supporting Lincoln. But if she falls victim to an anti-Washington/anti-incumbent mood, some Democrats say, Halter might prove to be a stronger candidate for the party in November, where the GOP candidate will be Rep. John Boozman.

The big battles here are the Republican primaries for governor, where Arnold Schwarzenegger (R) is term-limited, and the Senate, where Democrat Barbara Boxer is seeking a fourth term. The GOP frontrunners in both primaries are businesswomen and first-time candidates. Meg Whitman, the billionaire fomer eBay chief executive, has spent some $80 million thus far, most of it out of her own pocket, and seems to be increasing her lead in the gubernatorial primary over state Insurance Commissioner Steve Poizner, no slouch in the money department either. Whitman once had a lead in the polls against her presumptive Democratic opponent, Jerry Brown, the state attorney general and former two-term governor. But as Poizner has been hammering at Whitman for being, as he sees it, soft on illegal immigration (he supports the new Arizona law, she opposes it), Whitman has responded to Poizner's attacks by moving steadily to the right. And so while she seems to have dodged a problem in the primary, her advantage over Brown is gone.  For now.

Republicans are in a quandary in the Senate race. Boxer has long been the Democrat Republicans most love to hate, but the Republican who runs strongest against her in the fall, former Rep. Tom Campbell, supports abortion rights and gay marriage -- positions anathema with the party rank and file.  Carly Fiorina, the former CEO at Hewlett Packard, has pulled ahead of Campbell and a third candidate, state Assemblyman Chuck DeVore, who once had dreams of being the conservative alternative. Fiorina has the support not only of Sarah Palin but of moderates, such as Maine Sen. Olympia Snowe, as well. Campbell has run for the Senate twice before, losing the GOP primary in 1992 and the general election in 2000, when he got creamed by Sen. Dianne Feinstein (D).

For her part, Boxer is not expected to have any problems in the primary with Mickey Kaus, a journalist and political blogger. If there is any degree of dissatisfaction with Boxer among Democratic voters, we might see it in Kaus' totals. But the general election is the real story here: If the GOP can get its act together, Boxer could face the toughest challenge of her career.

While Whitman and Fiorina are not seen as personally close, Republicans like the idea of having the two "non-politician" new faces running for the top jobs in Califorinia, and especially like the fact that they are women. But both have chinks in their armor from their days in the business world that Democrats Brown and Boxer will be more than willing to exploit.

No House member in the Golden State is thought to be in any difficulty. But some progressive Democrats are once again supporting the candidacy of anti-war activist Marcy Winograd against Rep. Jane Harman (D-36). Harman, a hawk on Israel and no friend of Speaker Nancy Pelosi, beat Winograd by a wide margin in the 2006 primary. Winograd's issue last time was Iraq and Harman's initial vote supporting the war; now it's Israel. Winograd is calling for a "one-state solution" -- a combined Israel and Palestine, which would end Israel's status as a Jewish State. Democracy for America, founded by ex-DNC chair Howard Dean and now run by his brother Jim, is supporting Winograd.

In other House primaries, former Rep. Richard Pombo (R) has moved and is seeking a comeback in the 19th CD, where GOP incumbent George Radanovich is retiring.

There is a special runoff in the 9th Congressional District, which Nathan Deal (R) vacated to run for governor. Both candidates are Republicans. Tom Graves, a former state representative backed by the Tea Party, and Lee Hawkins, a dentist and former state senator, were the top two finishers in the initial May 11 primary. No candidate reached the 50 percent threshold; Graves had 35 percent of the vote to 23 percent for Hawkins. No matter who wins, both face each other again in the regular July 20 primary for the full term that starts in January.

Former four-term Gov. Terry Branstad is the frontrunner in the GOP primary to win his old job back, and polls show him ahead of incumbent Democrat Chet Culver for November. Branstad leads businessman Bob Vander Plaats, a favorite among Tea Party folks, and state Rep. Rod Roberts in the primary. Culver is seen as one of the nation's most vulnerable governors.

In the Senate race, five-term Republican Charles Grassley will face the winner of the Democratic primary, expected to be Roxanne Conlin -- who lost to Gov. Branstad back in 1982. Iowa has never sent a woman to Congress.

Both parties have wide open primaries for the race to succeed term-limited Gov. John Baldacci (D); seven Republicans and four Democrats are running. In the Democratic primary, state Senate President Elizabeth Mitchell, who lost to U.S. Sen. Bill Cohen (R) back in 1984, is thought to be leading; the GOP frontrunner may be businessman Les Otten, though some say we should watch out for Waterville Mayor Paul LePage, who has the backing of the Tea Party. Another 11 candidates are running in November as independents, a fact not to be ignored in a state that has elected two independents as governor, Jim Longley (1974) and Angus King (1994 & '98).

Nevada is a key test of the strength of the Tea Party movement, which would love nothing more than to oust Senate Majority Leader Harry Reid, seeking a fifth term. For the longest time polls have shown Reid losing to any Republican. But the GOP has its own problems, as longtime frontrunner Sue Lowden has made numerous gaffes on the campaign trail and now has fallen behind former state Assemblywoman Sharron Angle, a Tea Party favorite, who seems to have all the momentum going her way.  Angle says she would phase out Social Security and abolish the federal income tax code, and Democrats argue she is out of the mainstream.  Another way of putting it is that Reid may be among those most rooting for a victory by Angle in the primary.  Also seeking the GOP nod is businessman Danny Tarkanian, son of former UNLV basketball coach Jerry Tarkanian.

One incumbent almost certain to go down to defeat on Tuesday is Gov. Jim Gibbons(R), but don't attribute that to anti-incumbency sentiment; Gibbons has been skating on political thin-ice for a long time, his problems stemming from an ugly divorce and the state's poor economic climate. The likely GOP primary winner is former federal judge Brian Sandoval. No Nevada governor has ever been defeated for renomination. The Democratic nominee is expected to be Rory Reid, the Clark Co. Commission chair and, more important, Harry's son. 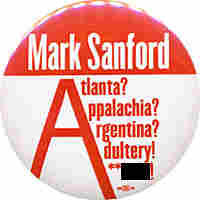 Once again, a sex scandal has ensnared a leading politician in the Palmetto State. First it was Gov. Mark Sanford, which ended any chance of him reaching higher office. Now it threatens his fellow Republican, state Rep. Nikki Haley, a rare moment where allegations of sexual impropriety involve a female politician. Haley, a once upon a time Sanford loyalist, had pulled ahead in a four-way GOP primary field that includes state Attorney General Henry McMaster, Lt. Gov. Andre Bauer and Congressman Gresham Barrett. But now two men have come forward saying they had an "inappropriate physical relationship" with the married Haley -- charges she emphatically denies. Haley, who has the backing of former S.C. First Lady Jenny Sanford as well as Sarah Palin and Tea Party followers, is expected to advance to a runoff, perhaps with McMaster, on June 22. The Democratic nominee will be either state Sen. Vincent Sheheen or state Education Superintendent Jim Rex. Gov. Sanford is term-limited.

Sen. Jim DeMint (R) has minor opposition in the GOP primary. His Democratic opponent is expected to be former state Rep. Vic Rawl.

One GOP House member facing a serious primary is Bob Inglis of the 4th CD. He is facing four challengers, all of whom say Inglis -- who voted for the bank bailout in 2008 -- is not the conservative he claims to be. Inglis also was one of six Republicans who voted to reprimand fellow S.C. congressman Joe Wilson after his "You lie!" outburst during President Obama's address to a joint session of Congress. Inglis' closest rival is thought to be local prosecutor Trey Gowdy; also running is Christina Jeffrey, who some might remember was once the House historian fired by then-Speaker Newt Gingrich.

Another House primary to watch is in the 1st District, where Rep. Henry Brown (R) is retiring after five terms. Among the nine Republicans running to succeed him are Carroll Campbell III, son of the late Gov. Carroll Campbell, and Paul Thurmond, whose father was Strom Thurmond, the former senator. Also running is state Rep. Tim Scott, the first black Republican elected to the S.C. state house since Reconstruction. The GOP nominee in this very Republican district is expected to be decided in the runoff.

On Morning Edition yesterday, NPR's Mara Liasson and I previewed today's action, which you can listen to here: