Accessibility links
Flashback Friday: This Day In 1964, Goldwater Says No To Civil Rights Bill : It's All Politics On this day in 1964, Barry Goldwater, the frontrunner for the GOP presidential nomination, announces on the Senate floor he will vote against the civil rights bill, calling it unconstitutional.

Flashback Friday: This Day In 1964, Goldwater Says No To Civil Rights Bill

Flashback Friday: This Day In 1964, Goldwater Says No To Civil Rights Bill 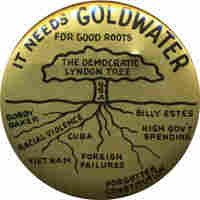 Sen. Barry Goldwater of Arizona, the clear frontrunner for the Republican presidential nomination, announces on the Senate floor that he will vote against the civil rights bill.

Goldwater specifically objects to the public accommodations and employment parts of the bill, calling them an usurption of power by the federal government and says they "require for their effective execution the creation of a police state."

He reiterates that he is opposed to discrimination of any kind, and points out that he voted for the civil rights bills of 1957 and 1960.  But he says his conscience cannot let him vote for a bill he argues is clearly unconstitutional.

The next day, by a vote of 73-27, the Senate passes the bill.  President Johnson will sign it into law on July 2.

Goldwater will win the GOP presidential nomination on the first ballot in San Francisco on July 15.  He will suffer a crushing defeat in November at the hands of Johnson.