Accessibility links
Now The Focus Is On Byrd's Successor; Gov. Manchin Won't Appoint Himself : It's All Politics The Senate's longest serving member, Robert C. Byrd of West Virginia, is dead, at age 92.  Gov. Joe Manchin, a fellow Democrat, will name his successor, but he says he will not select himself.

Now The Focus Is On Byrd's Successor; Gov. Manchin Won't Appoint Himself

Now The Focus Is On Byrd's Successor; Gov. Manchin Won't Appoint Himself

The passing of political giants always makes one reflect about their legacies, and there's lot to reflect about Sen. Robert Byrd, the longest serving member of Congress in history.

The West Virginia Democrat died early Monday morning at 92.  He had been in the hospital for several days, but on Sunday his office released a statement saying he was "seriously ill."

Byrd was a character out of another era, a Constitution-carrying, fiddler-playing, Thoreau-quoting student of the Senate.  In his early life, he was a member of the Ku Klux Klan -- a decision he long regretted -- along with other stains on his record, such as this note he wrote in 1944, to racist Sen. Theodore Bilbo of Mississippi, about the move to integrate the armed services:

I shall never fight in the armed forces with a Negro by my side... Rather I should die a thousand times, and see Old Glory trampled in the dirt never to rise again, than to see this beloved land of ours become degraded by race mongrels, a throwback to the blackest specimen from the wilds.

Twelve years into his service in Congress he voted against the 1964 Civil Rights Act, holding the Senate hostage in a long filibuster.  It was a vote he later said he wishes he could have taken back.

But he was pretty much a conservative lawmaker, speaking against communism, voting against Thurgood Marshall's nomination to the Supreme Court in '67, filibustering the court nomination of Abe Fortas in '68, and strongly supporting the war in Vietnam.  In 1971, a year and a half after Chappaquiddick, Byrd unseated Edward Kennedy as Senate majority whip.

He went on to two tours as majority leader, and was a longtime chairman of the Senate Appropriations Committee.  In 1976, he made an abortive bid for the Democratic presidential nomination.

There was no "moment" that turned Byrd portside, but he long ago renounced his racist past and also became a reliably liberal vote in the Senate.  He spent most his career apologizing for his mistakes, especially about race.  He became a strong supporter of civil rights and a leading critic of the war in Iraq.  Even though Hillary Clinton had easily won the West Virginia Democratic presidential primary in 2008, Byrd gave a hearty endorsement of Barack Obama, who he called a "noble-hearted patriot and humble Christian, and he has my full faith and support."

As a self-assigned protector of the Constitution, he argued against increased presidential power, no matter who was in the White House.  And he deeply disagreed with going to war without congressional approval.

More than anything, he loved the Senate.

Today President Obama said Byrd was "as much a part of the Senate as the marble busts that line its chambers and corridors."

Born Cornelius Calvin Sale Jr., Byrd was not, it's fair to say, universally loved by his Senate colleagues.  But he was deeply respected. 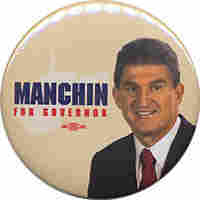 Gov. Manchin is thought to be interested in the Senate but says he will not appoint himself. hide caption

First elected to the Senate in 1958, he never received under 64 percent of the vote in eight re-election bids.  He also served six years in the House, from 1953-58.  The longest serving member of both the Senate and, when you combine his service in the two chambers, Congress itself, his current term would have ended after 2012.

Now comes the question of who will replace him in the Senate.  Gov. Joe Manchin (D), who is term-limited in 2012 and thought to harbor Senate ambitions, has said he will not appoint himself.  And while he knows that Democrats need every vote they can get to pass the financial regulation bill that is before the Senate, Manchin said he will not be rushed into naming a successor.

Here's the tricky, and confusing, part.  CNN notes that W.Va. law states that "if a Senate vacancy is created within two and a half years of the end of a term, the appointed successor will automatically serve out the remainder of the term. If not, a special election is required."  Thus, if Manchin names a successor before July 3, there will be a special election, probably in November.  If it's after July 3, he or she will remain in office until Jan. 3, 2013.  CNN adds this caveat:

West Virginia law fails, however, to state exactly when a vacancy occurs. Whether the vacancy is considered to have been created at the moment of Byrd's death, when the Senate informs state officials of the vacancy, or when Manchin declares the seat vacant will be crucial. West Virginia -- a traditional Democratic stronghold -- has been increasingly competitive for the Republicans. John McCain easily defeated Barack Obama in West Virginia in the 2008 presidential election.

Topping the list of likely appointees is former state Democratic Party chair Nick Casey.  Larry Puccio, the current Dem chair, has also been mentioned.  The leading Republican candidate is thought to be Rep. Shelley Moore Capito, daughter of former Gov. Arch Moore, but she may be looking at the governorship, which will be open in 2012.  Another GOP possibility is former Secretary of State Betty Ireland.

UPDATE (12 noon):  Robert Phipps of Fairmont, W.Va., Tweets that my "Manchin-is-thought-to-harbor-Senate-ambitions" line is "far too kind."  He points to a Sunday profile of Manchin in the Pittsburgh Tribune-Review by Mike Wereschagin that clearly states the gov. had been getting ready to run for Byrd's Senate seat in 2012, and in fact has a federal political action committee, Country Roads PAC, to boost his national recognition.  He campaigned for Mark Critz, the Democrat who won the Pennsylvania House seat of the late John Murtha, and next month becomes chairman of the National Governors Association.