Accessibility links
Flashback Friday: On This Day In 1964, L.B.J. Rules Out R.F.K. For V.P. : It's All Politics On this day in 1964, President Lyndon Johnson says he will not name any member of his Cabinet as his running mate, an announcement that everyone understood to be a message to Attorney General Robert Kennedy, who had a tense relationship with LBJ. 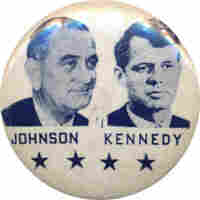 RFK did run in 1964, but not for V.P.; he was elected to the Senate that year from New York. hide caption

Amid widespread speculation over whom he will choose to join him on the Democratic ticket, President Lyndon Johnson announces that no members of his Cabinet will be considered as his running mate.

The meaning of the move is clear to everyone.  What Johnson was really saying is that, despite the clamoring among many in the party, there is no way he will select Attorney General Robert Kennedy, brother of the slain President John Kennedy, as his number two.  Relations between LBJ and RFK, never good, got considerably worse after President Kennedy was assassinated the previous November.  Simply put, the two detested each other.

The announcement leaves Minnesota Sens. Hubert Humphrey and Eugene McCarthy as the frontrunners for the vice-presidential nomination; Johnson will ultimately select Humphrey.

Kennedy, in a gracious statement, said it is up to the presidential nominee to pick a running mate, and he understood Johnson's decision.  But later, he wryly said that he sent a note to the other Cabinet members that read, "I'm sorry I took so many nice fellows over the side with me. "

On Sept. 3, Kennedy would resign from the Cabinet to run as the Democratic nominee for the Senate from New York, a race he would win.

Also on this day, Sen. Clair Engle, a California Democrat who was suffering from brain cancer and who had already announced his retirement, dies at age 52.  Within the next week, Gov. Pat Brown will name Pierre Salinger, who had been President Kennedy's press secretary, to fill the seat.  Salinger had won the Democratic nomination for the Senate in the June primary, edging out Alan Cranston.