Accessibility links
I Can't Talk About Chelsea's Wedding : It's All Politics There are a lot of rumors about a potential wedding this weekend involving the daughter of a former president and a current secretary of state.  She is thought to be marrying the son of two ex-members of Congress.  We have the scoop.

I Can't Talk About Chelsea's Wedding

I Can't Talk About Chelsea's Wedding 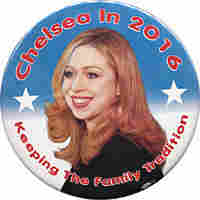 Chelsea Clinton *might* run in 2016.  But I'm not allowed to say if she actually will. hide caption

It's not that I signed an agreement or anything.  It's just a general principle among some of us "in the know" that we can't talk about what *may be* Chelsea Clinton's wedding on *possibly* Saturday at someplace *near* Rhinebeck, N.Y.

If she were getting married on Saturday, and I'm not saying she is, it *could be* to Marc Mezvinsky, who is *allegedly* the son of two former members of Congress: Marjorie Margolies-Mezvinsky, a Pennsylvania Democrat, and Ed Mezvinsky, a Democrat from Iowa who served in the 1970s.  Ed, in fact, *may* have been on the House Judiciary Committee during the *so-called* impeachment of President Nixon.

Ed lasted two terms in Congress, getting defeated in 1976 by Republican Jim Leach.  Marjorie lost after one term in '94 to Jon Fox.

Chelsea of course is the daughter of You Know Who.  But I really can't say.

And even if Chelsea were hypothetically getting married this weekend, it would not be the first time it happened to a daughter of a president or former president.  As you all know, Jenna Bush, daughter of George W., married Henry Hager in Crawford, Texas, in 2008.  Amy Carter wed Jim Wentzel in the equally exotic place of Plains, Ga., in '96.  And we can't forget the weddings of Tricia and Julie Nixon (not to each other), events that rivaled the Beatles coming to Shea Stadium.

But everybody knows about those affairs.  Few people know about what could happen this weekend.  And I'm pleased that I was able to share my inside information with you.