Accessibility links
Mad At The Democrats And Republicans? Don't Count On A Third Party : Political Junkie This week's Political Junkie column focuses on the long-held — but always unfulfilled — desire for a winnable third-party or independent presidential ticket. With growing unhappiness about Washington's dysfunction, some are hoping for an alternative for 2012.

Listen
Mad At The Democrats And Republicans? Don't Count On A Third Party 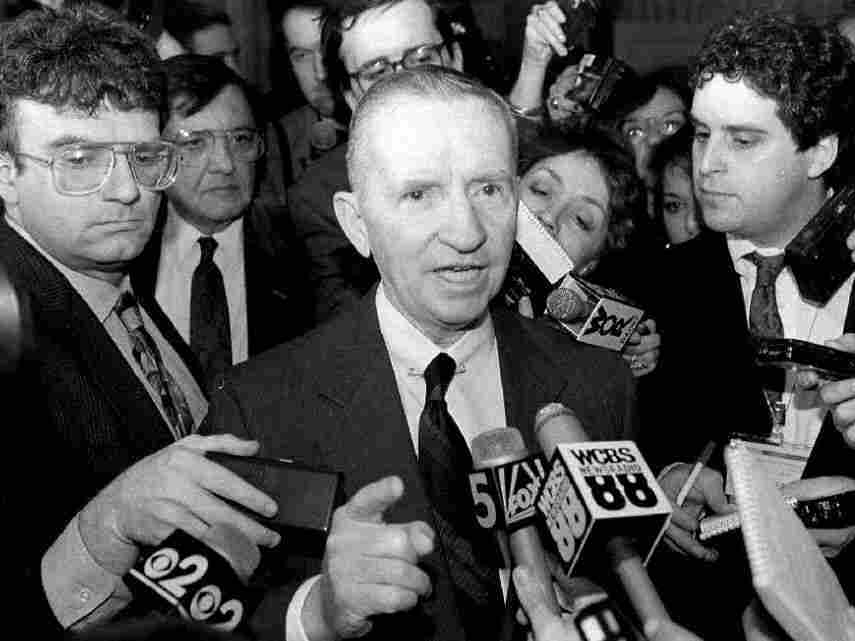 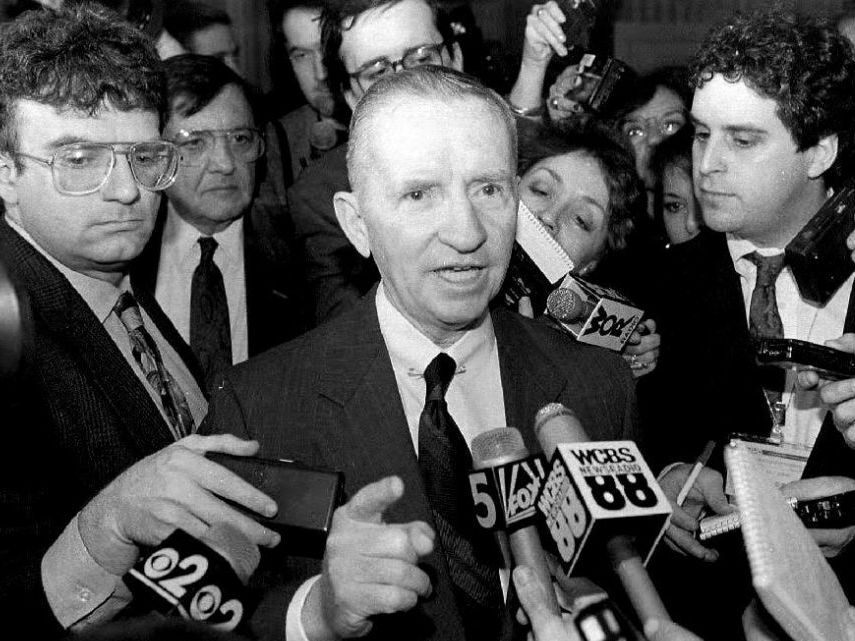 In this period of discontent, with polls showing the public's unhappiness with President Obama rising to a record level and their approval of Congress sinking towards single digits — and nearly everyone agreeing that Washington simply does not work — there is no shortage of those who say the answer is a viable third-party (or independent) presidential candidate next year.

If Obama is as left wing as conservatives argue and the GOP presidential hopefuls are as right wing as liberals insist, then surely what the public wants is a centrist alternative to the two parties come 2012, right? Back in July, the New York Times' Tom Friedman breathlessly wrote about the likelihood of such an occurrence:

Thanks to a quiet political start-up that is now ready to show its hand, a viable, centrist, third presidential ticket, elected by an Internet convention, is going to emerge in 2012. I know it sounds gimmicky — an Internet convention — but an impressive group of frustrated Democrats, Republicans and independents, called Americans Elect, is really serious, and they have thought out this process well. In a few days, Americans Elect will formally submit the 1.6 million signatures it has gathered to get on the presidential ballot in California as part of its unfolding national effort to get on the ballots of all 50 states for 2012.

The goal of Americans Elect is to take a presidential nominating process now monopolized by the Republican and Democratic parties, which are beholden to their special interests, and blow it wide open — guaranteeing that a credible third choice, nominated independently, will not only be on the ballot in every state but be able to take part in every presidential debate and challenge both parties from the middle with the best ideas on how deal with the debt, education and jobs.

I couldn't see Friedman's face as he was writing those words, but I'm guessing he was quite serious. He has, after all, never been known to be a laugh riot. And what he wrote was echoed about a month later on the pages of the Wall Street Journal by Democratic pollsters Patrick Caddell and Doug Schoen:

We already see evidence on the ground that from the discontent coursing through the electorate there may emerge a third or even fourth political party that would be competitive in next year's presidential election. Look no further than the recent launch of the centrist, bipartisan, Americans Elect. This is a nonprofit political organization that plans to break the stranglehold of the two-party duopoly by selecting a third presidential ticket, via an Internet convention, that will be on the ballot in 2012.

The desire to shake up the system is not new. George Wallace said "there ain't a dime's worth of difference" between the two parties during his 1968 third-party presidential bid. And there was a time, in 1992, when polls showed more people preferring independent Ross Perot than either President George Bush or Democratic challenger Bill Clinton ... that is, until Perot self-destructed. Nonetheless, Perot — despite his dropping out and then resurfacing during the fall — attracted some 19.7 million votes, more than any non-major party presidential candidate in history.

And so it's not unusual to hear the kind of clarion calls as quoted above. And perhaps there is a perception out there that the need is greater than ever because Washington has never seemed as dysfunctional as it does today. But while the suggested remedy is familiar — that we need someone outside the Democratic and Republican Parties to come and rescue us — the record shows that such a rescue mission is not likely to succeed.

And who is that person who will come and save the nation? Good question. Caddell and Schoen note, "There are now rumblings from Donald Trump, a former contender for the Republican nomination, that he may run as an independent." Excellent. If that happens, then there is no question that someone will have to come and rescue us from Donald Trump. (Aside: Has anyone ever seen Trump's birth certificate?) But does anyone think such a candidate, whoever he or she is, could win? Perot certainly touched a nerve in '92, partly thanks to the $60 million of his own money he pumped into his effort.

And how many electoral votes did he receive in November? Zero. He never came close to winning a single state. He did beat out Clinton for second place in Utah, and he narrowly edged Bush for second in Maine (by about 300 votes). But if the name of the game is getting 270 electoral votes, well, Perot fell 270 electoral votes short. Despite his personal wealth and inclusion in the debates.

And personal wealth may be a key ingredient if any independent is going to make a run next year. The current system, already stacked in favor of the two major parties, is not about to allow an outsider to enter the contest unless they bring a ton of money to the table.

Obama is on course to raise some $1 billion for his re-election campaign. While this dwarfs what any GOP candidate can come up with, there seems to be little doubt — thanks in part to the Supreme Court's Citizen United decision — that the opposition will be well-financed.

But money aside (not that we should diminish the importance of money), the history of third-party or independent candidates shows that while they may affect who wins and who loses, they just don't come close to making it to the White House themselves.

A look at a half-century of such candidacies (data courtesy CQ's Guide to U.S. Elections):

Wallace carried 5 states in the South in 1968. Perot got 19 million votes but no electoral votes in 1992. Nader received a miniscule national total in 2000, but Democrats insist his vote in Florida cost Al Gore the presidency. Ken Rudin collection hide caption

effect on race: Wallace's strength was primarily in the South, a region where Democrats always were invincible but which GOP nominee Barry Goldwater carried four years earlier. Supporters of Richard Nixon (R), who won, and Hubert Humphrey (D), who lost, insisted that Wallace hurt their cause.

effect on race: While Anderson, as a moderate Republican, may have taken some votes away from GOP candidate Ronald Reagan, most felt that his liberal positions as a third-party candidate ultimately came from President Jimmy Carter (D).

effect on race: The consensus is that while Perot took votes from both President George Bush (R) and Democratic challenger Bill Clinton (D), he did more damage to Bush, enabling Clinton to win with under 50% of the vote.

effect on race: Nader only broke into double digits in just one state, Alaska (10.1%). And he only got 1.6% of the vote in Florida. But those votes — all 97,488 of them — may have cost Al Gore the presidency. He lost the state to George W. Bush by just 537 votes, and Gore partisans say that Nader is the reason why Bush carried Florida and received the necessary electoral votes to put him over the top (271-266).

Candidates 2012. New Hampshire Gov. John Lynch (D) announces Sept. 15 he will not seek a fifth two-year term ... Elizabeth Warren, the Obama administration's aborted nominee to head up the Consumer Financial Protection Bureau, declares her candidacy Sept. 14 for the Democratic nomination to take on GOP Sen. Scott Brown in Massachusetts ... Rep. Dennis Kucinich (D), who has served in the House eight terms from the Cleveland area but who because of redistricting was thought to be looking to win re-election in a newly-drawn district in Washington State, will be staying in Ohio after all. He has been, however, thrown into the same district as fellow Democrat Marcy Kaptur.

Political Junkie on the road. Last week's visit to Springfield, Ill. and member station WUIS was a big success (according to me). This week (Monday and Tuesday) I'll be in Baton Rouge, La., for events with member station WRKF.

In Memoriam. Charles Percy, a moderate to liberal Illinois Republican who unseated Sen. Paul Douglas (D) in 1966 and served three terms before being defeated in 1984 by Rep. Paul Simon, died Sept. 17 at the age of 91. A "dove" on the Vietnam War who stood up to President Nixon over the Watergate scandal, Percy was long considered a prospective presidential candidate, starting in 1968. His expected presidential bid in 1976 ended before it began, once Nixon resigned and Gerald Ford became president. When the GOP took control of the Senate in 1980, Percy became Foreign Relations Committee chair. He narrowly was defeated in a bid for governor in 1964 ... Malcolm Wallop, 78, a former three-term GOP senator from Wyoming, on Sept. 14. Wallop unseated Sen. Gale McGee (D) in 1976 and served 18 years before retiring in 1994 ... Carl Oglesby, 76, who headed up the antiwar Students for a Democratic Society (SDS) in the 1960s, on Sept. 13 ... Jim Cannon, 93, a former Newsweek editor who also worked for Nelson Rockefeller (when he was governor of New York and later as vice president) and served as a domestic policy aide in the administration of President Gerald Ford, on Sept. 15.

And Don't Forget ScuttleButton. ScuttleButton, America's favorite waste-of-time button puzzle, can be found in this spot every Wednesday. A randomly-selected winner will be announced each week during the Political Junkie segment on NPR's Talk of the Nation. It's not too late to enter last week's contest. Not only is there incredible joy in deciphering the answer, but the winner gets a TOTN t-shirt!

Podcast. There is also a new episode of our weekly podcast, "It's All Politics," every Thursday. It's hosted by my partner-in-crime, Ron Elving, and me. Latest episode: Analysis of the results in NY 09 and the latest GOP debate. You can listen to it here

Oct. 4 — Special West Virginia gubernatorial election: acting Gov. Earl Ray Tomblin (D) vs. businessman Bill Maloney (R). Tomblin acceded to the governorship when the incumbent, Joe Manchin (D), was elected in 2010 to the Senate seat long held by Robert Byrd (D), who died. This is to fill the final year of Manchin's term. 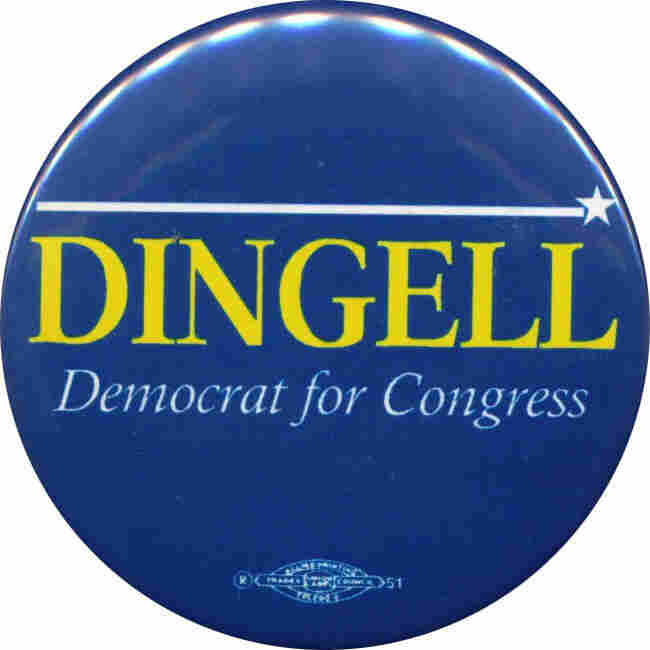 This day in political history: John Dingell, 58, a Democrat who has represented Michigan's 15th CD since 1933, dies at Walter Reed Medical Center in Washington (Sept. 19, 1955). He will be succeeded in a December special election by his son, John Jr. The younger Dingell — first elected at age 29 and now 85 — is still in the House and is the longest serving member of Congress in history.