Accessibility links
Open Democratic Senate Seats Again Give Big Opportunity For GOP, Or Not : Political Junkie Of the eight senators retiring in 2014, six of them are Democrats. Which should be good news for the Republicans. Maybe. Plus: take our poll, please, as to who will win in South Carolina next week.

Listen
Open Democratic Senate Seats Again Give Big Opportunity For GOP, Or Not

Open Democratic Senate Seats Again Give Big Opportunity For GOP, Or Not

The headlines have not been especially kind to Senate Democrats lately as they, for the second consecutive cycle, head into an election with a numerical disadvantage and more open seats to defend.

But looking at an election by simply counting the number of seats up that year or where incumbents are retiring misses the point. In 2012, the mantra was the Republican Party was going to win a Senate majority because the numbers so clearly favored them; they needed a net gain of just four, and of the 33 seats up that year, 23 were held by the Democrats. Plus, of the 10 senators retiring voluntarily, only three were Republicans. So the opportunities for GOP pickups were there.

Dem retirements in S.D. and W.Va. could give the GOP an edge. Montana may not be as ripe for a party switch if Schweitzer (D) runs. Ken Rudin collection hide caption

The reality, of course, was different. Of the six Democratic and one Dem-leaning Independent incumbents who were retiring, Republicans were able to pick up only one of the seats — Ben Nelson's in Nebraska. Once, they were talking about winning the seats of the departing Dan Akaka (Haw.), Jeff Bingaman (N.M.), Kent Conrad (N.D.), Jim Webb (Va.) and Herb Kohl (Wis.), as well as knocking off incumbents Claire McCaskill (Mo.) and Jon Tester (Mont.). None of that happened. In fact, despite the favorable numbers, the GOP actually lost seats (a net of two) that year.

With Democrats (including two indies) currently holding 55 of the 100 Senate seats, the Republican task in 2014 is a bit greater; now the GOP needs a net pickup of six.

But, once again, the numbers favor them; of the 35 seats up next year, 21 are held by the Democrats, only 14 by the Republicans. And again, the key number is the retirements: of the eight quitting, six are Democrats.

Will that translate into sizable Republican gains? Who knows? Sometimes, in "wave" election years, competitive seats usually go in one direction; think of the big anti-Republican years of 2006 and 2008 and the big anti-Democratic year of 2010. The fact is, we still have a ways to go before we know what the political landscape will look like next year, and whether or not the "six year itch" — a midterm election six years into the president's term — will really play into voters' decisions. In the meantime, here's an early-bird look at the open Democratic seats:

IOWA (Tom Harkin retiring): The landscape looks much better for Democrats here than it does for Republicans. While the Dems (including Harkin) have lined up early and easily behind Rep. Bruce Braley, the GOP is still searching for a candidate. Initially the buzz was that Republicans would undertake an ideological battle between two sitting House members, establishment choice Tom Latham and Tea Party fave Steve King. Then Latham said he wouldn't run. Then King gave some indication that he was wavering as well, though sources say he is still considering running. Entreaties to Gov. Terry Branstad and Lt. Gov. Kim Reynolds went nowhere; Branstad had been seen as a Latham backer. Now the focus seems to be on David Young, the chief of staff to Sen. Chuck Grassley, who has been sending out feelers to donors and party officials. Other possibilities include state Agriculture Secretary Bill Northey and Secretary of State Matt Schultz; some GOPers say they haven't given up on Latham. Until then ... Leans Democratic.

MICHIGAN (Carl Levin retiring): Democrats seem to be rallying around three-term Rep. Gary Peters, who had been mulling a run for governor when Levin announced his retirement. Peters is expected to formally declare his candidacy tomorrow (May 1), a decision that seemingly was made easier now that Debbie Dingell, wife of Rep. John Dingell and a DNC powerhouse, said she would not run. For the Republicans, Rep. Justin Amash, a Tea Party favorite, is looking at it, along with fellow Rep. Mike Rogers and former Secretary of State Terri Lynn Land. Republicans haven't won a Senate seat in Michigan since Spencer Abraham in 1994, but they note that they defeated Peters in 2002 when he ran for state attorney general. Democrat favored.

Schweitzer ran for the Senate once before, losing to Conrad Burns (R) in 2000. Ken Rudin collection hide caption

MONTANA (Max Baucus retiring): Republicans must be going into the 2014 elections a bit dispirited, having been convinced they would oust Sen. Jon Tester (D) last year, only to come up short. Now they are facing another opportunity, but Democrats insist that Baucus' retirement and the likelihood that former Gov. Brian Schweitzer (D) will run actually strengthens their chances. It might. Republicans would love to entice another former governor, Marc Racicot, into the race. The two Republicans already in the race in what would have been an uphill challenge to Baucus are not well-known at all. Meanwhile, ex-Rep. Denny Rehberg, who lost to Tester in 2012, indicates he might be inclined to run again, saying he is "not ruling anything out." Tossup.

NEW JERSEY (Frank Lautenberg retiring): The action here will likely be determined in the Democratic primary. And there's no guarantee that there will be one. By all accounts, Newark Mayor Cory Booker is the odds-on favorite for the Democratic nomination. He is a prodigious fundraiser with a great story and a winning personality. What he doesn't necessarily have is a success at running Newark, N.J.'s largest city. Lautenberg has not hidden his contempt for Booker, who talked about running for the seat before the senator officially announced his retirement. Lautenberg has said that Booker would be better off doing more mayor-type stuff and less fundraising around the country. The question for Rep. Frank Pallone (D), who has long wanted to be in the Senate, is whether it's worth taking on an icon like Booker in a primary. Pallone has some $3.7 million in his House bank account, money he can legally transfer to a Senate campaign. And he would be expected to have the backing of county party organizations that remain loyal to Lautenberg. Republicans haven't won a Senate seat here since 1972. Safe Democratic.

SOUTH DAKOTA (Tim Johnson retiring): Republicans have long been confident they can win this seat, with or without Johnson in the race. Their apparent nominee was long thought to be former Gov. Mike Rounds, but there remains the possibility that two-term Rep. Kristi Noem, the state's at-large member of the House who is thought to be more conservative, could join the race as well. On the Democratic side, Stephanie Herseth Sandlin, who was ousted by Noem in 2010 after three terms and has kind of faded from view shortly thereafter, has reappeared as a potential candidate. Complicating her decision are the plans of Johnson's son, U.S. Attorney Brendan Johnson, who is also thought to be interested in the seat but will, along with the rest of the Democrats, wait to see what Herseth Sandlin is planning. Republican favored.

WEST VIRGINIA (Jay Rockefeller retiring): This state is the longest Senate losing streak for the GOP in the country; Republicans haven't won a Senate seat here since a 1956 special election, and they promptly lost it two years later. But they have a real shot in Rep. Shelley Moore Capito (R), a savvy 7-term House member who is the daughter of former Gov. Arch Moore. One thing that could jeopardize the party's chances is a primary challenge to Capito from conservatives that could weaken her in November. It's too soon to gauge the strength of Pat McGeehan, a former state delegate, who has joined the race. Democrats are still without a candidate; names currently bandied about include Secretary of State Natalie Tennant and state Supreme Court Justice Robin Davis. One Democrat who had earlier been making noises about running, Rep. Nick Rahall, is now expected to seek re-election to his House seat. Republican favored.

As for the two open Republican seats, the feeling is that Nebraska Gov. Dave Heineman (R) will run for the seat being vacated by fellow Republican Mike Johanns, and if he does he probably wins. There is less certainty about Georgia, where Saxby Chambliss (R) is leaving after two terms. Already two Republican congressmen, Paul Broun and Phil Gingrey, have announced their candidacies. A third, Jack Kingston, is thought to be close to joining them and a fourth, Tom Price, is considering it, as are other Republicans. Broun is a no-nonsense conservative who has a strong following in the Tea Party and has been endorsed by Ron Paul. But he also has a history of wading into topics with controversial and inflammatory statements, and Democrats say they would win the seat if he were the GOP nominee. But first they need a candidate, and there's no certainty their top choice, Rep. John Barrow, a Blue Dog in good standing, will run. Another Democratic possibility is Michelle Nunn, the daughter of former Sen. Sam Nunn.

The early guess here is that Republicans keep their two open seats.

S.C. 01. The debate was intense and personal. A "slugfest," Politico called it, and that's pretty accurate. Elizabeth Colbert Busch and Mark Sanford went at it for 75 minutes on Monday night, in advance of their May 7 election.

And that leads into this week's Political Junkie Poll. The question is NOT whom you would vote for; it's which candidate do you think will win.

Political Junkie segment on Talk of the Nation. Each Wednesday at 2 p.m. ET, the Political Junkie segment appears on Talk of the Nation (NPR's call-in program), hosted by Neal Conan with me adding color commentary, where you can, sometimes, hear interesting conversation, useless trivia questions and sparkling jokes. Last week's show focused on tough decisions that lawmakers must make, with two former House members as special guests, Marjorie Margolies (D-Pa.) and Chris Cannon (R-Utah). You can listen to the segment here:

Open Democratic Senate Seats Again Give Big Opportunity For GOP, Or Not

And Don't Forget ScuttleButton. ScuttleButton, America's favorite waste-of-time button puzzle, can usually be found in this spot every Monday or Tuesday. A randomly selected winner will be announced every Wednesday during the Political Junkie segment on NPR's Talk of the Nation. You still have time to submit your answer to last week's contest, which you can see here. Sure, there's incredible joy in deciphering the answer, but the winner gets not only a TOTN T-shirt, but also a 3-1/2 inch Official No-Prize Button! Is this a great country or what??

June 25 — Special Senate election in Massachusetts to replace John Kerry, who is now secretary of state. 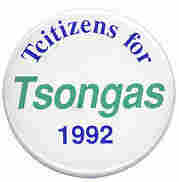 This day in campaign history: Former Sen. Paul Tsongas of Massachusetts becomes the first Democrat to formally declare he is a candidate for his party's 1992 presidential nomination. Tsongas, who served two terms in the House and one in the Senate before retiring after 1984, when he was diagnosed with cancer of the lymphatic system, says he will focus on the nation's economy, calling himself a "pro-business liberal" (April 30, 1991).