Accessibility links
Lautenberg Death Complicates Christie's Road To November, And 2016 : Political Junkie The death of Sen. Frank Lautenberg has thrown a monkey wrench onto the plans of N.J. Gov. Chris Christie. Calculations about Lautenberg's successor, and when to hold the special election, may affect Christie's re-election path this year ... as well as a potential White House bid in 2016. 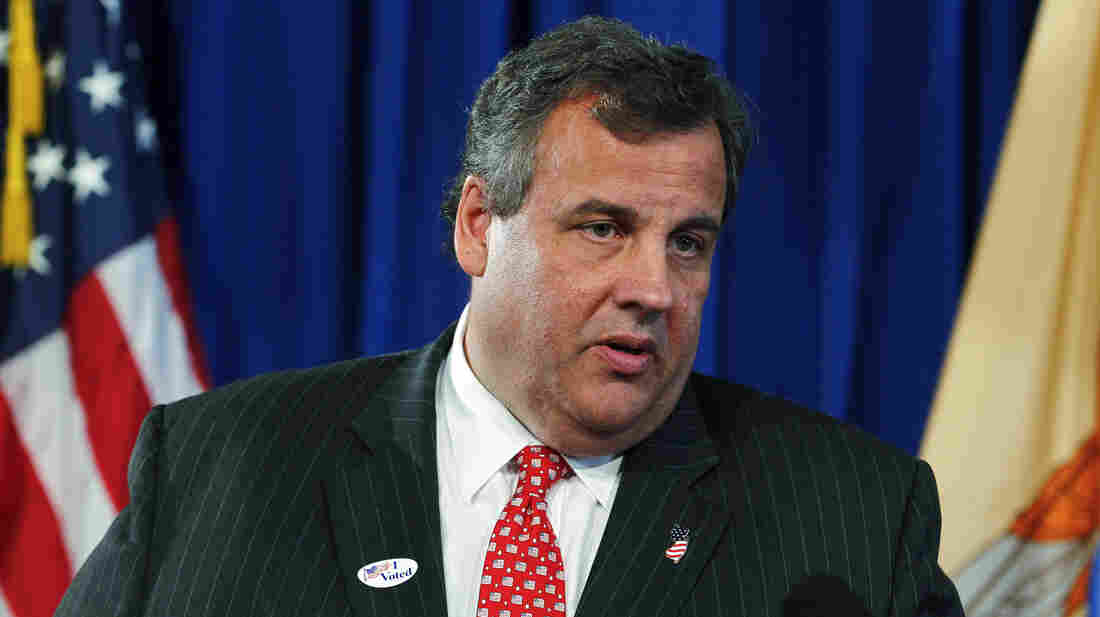 New Jersey Gov. Chris Christie outlines plans for a special election to be held to fill the vacant U.S. Senate seat of Sen. Frank R. Lautenberg (D-NJ), who died on Tuesday, at the Statehouse in Trenton, New Jersey. Christie did not disclose who would fill the vacant seat until the election scheduled for Oct. 16. Jeff Zelevansky/Getty Images hide caption 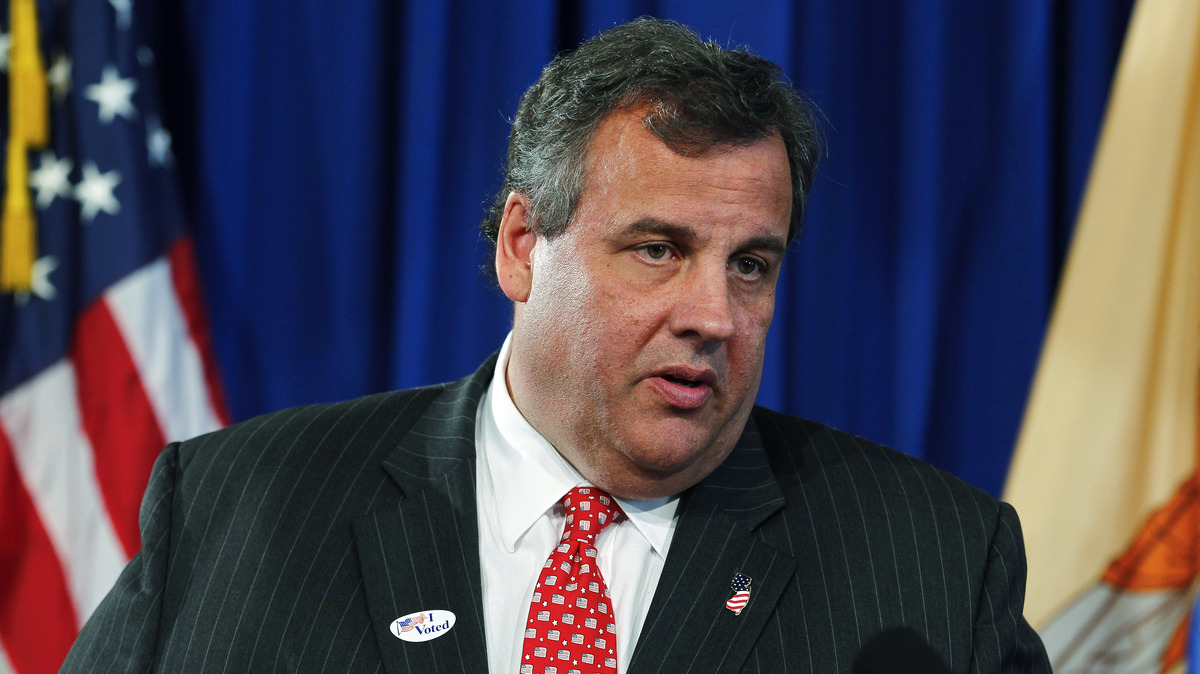 New Jersey Gov. Chris Christie outlines plans for a special election to be held to fill the vacant U.S. Senate seat of Sen. Frank R. Lautenberg (D-NJ), who died on Tuesday, at the Statehouse in Trenton, New Jersey. Christie did not disclose who would fill the vacant seat until the election scheduled for Oct. 16.

One of the last things Alaska Gov. Walter Hickel did before he resigned to join the Nixon Cabinet was to fill a Senate vacancy caused by the December 1968 death of E.L. Bartlett, a Democrat. Hickel picked a GOP state representative by the name of Ted Stevens. Stevens, who only months before lost a Republican primary bid for a different seat, went on to serve more than 40 years in the Senate, longer than any Republican in history. Appointing Stevens was by any definition a good move.

Less successful was Illinois Gov. Rod Blagojevich's opportunity some 40 years later to fill a Senate seat. With Barack Obama having been elected president, Blagojevich decided to offer the seat to the highest bidder. By doing so, he got himself impeached, removed from office, and sent to prison. It was also the beginning of the end for Rep. Jesse Jackson Jr., a rising star who ultimately was brought down thanks to his own greed and crashed to Earth (and served time as well).

There are countless stories in which governors took risks in filling Senate vacancies. But the one New Jersey's Chris Christie faces in deciding who should succeed the late Sen. Frank Lautenberg could very well play a role in Christie's future political plans. As in, 2016.

Lautenberg, who had already announced his retirement and who, at 89, was the oldest member of the Senate, died of viral pneumonia on Monday, June 3. His death suddenly put all the focus on Christie. Whom will he pick as his successor? Will it be a Republican? Will it be a placeholder? And when will the special election take place?

These are not insignificant considerations, especially for someone who may have thoughts about 2016. Let's take them one at a time.

Who. We don't have a successor yet. In a Tuesday news conference, Christie said he expected to name a new senator by next week, but he refused to be pinned down as to whether it would be a caretaker (as Mo Cowan is in Massachusetts) or someone who would run for the seat (as Tim Scott will in South Carolina). Among the names being bandied about include Lt. Gov. Kim Guadagno and state Sens. Joe Kyrillos (the GOP nominee for the Senate in 2012 against Bob Menendez) and Tom Kean Jr. (who lost to Menendez in 2006). There have also been some murmurs about the senior Tom Kean, who served two terms as governor from 1982-89 and who is 78 years old. He would, if appointed, be thought of as a placeholder.

If you're wondering whether or not Christie could conceivably name a Democrat, fuhgeddaboudit. The gov. took a lot of heat from conservatives over his embracing President Obama in the aftermath of Hurricane Sandy last fall, just before the presidential election; he is not about to risk his future by appointing a Democrat.

When. This was the tricky part. While there is considerable debate about what the law states, Christie was weighing appointing an interim senator for now and then holding the election in 2014, when Lautenberg's term was to expire. But Democrats cried foul, alarmed that a (probable) Republican would go into next year's election with a year and a half of experience as the incumbent under his or her belt.

The last thing Christie wanted was to have the special election fall on the same day as this year's gov. election, Nov. 5. His hopes of a landslide re-election over Democrat Barbara Buono might be jeopardized if the Democratic Senate candidate happened to be a charismatic figure, someone like Newark Mayor Cory Booker, a candidacy that could bring Democrats to the polls and rob Christie of a mandate (which he would love to tout to voters in Iowa and New Hampshire). Booker would also theoretically help Democratic candidates for the state legislature, which is also at stake in November.

So here's what he announced: A primary on Aug. 13 and the general election on Oct. 16, a Wednesday.

Democrats were furious, saying that having the election in October instead of on the regular November election day would cost the state some $24 million. The money angle may be their main talking point, but in reality their anger is aimed at Christie keeping Booker from appearing on the November ballot and pumping up turnout. Still, Christie's reputation as a fiscal conservative has taken a hit.

Republicans weren't too happy either; they would have preferred to have their appointee serve for 18 months going into the 2014 election.

But the governor stood his ground, denying politics played a part in his decision. He insists New Jersey can't afford to be without a senator, and the sooner one is elected the better off the state will be. (He even got some praise for that from Senate Democratic Leader Harry Reid, who needs every vote he can get.)

Here's what Christie also accomplished. If the primary were to be held as previously scheduled in 2014, it would give pause to several Democrats who didn't particularly care for Booker but who didn't want to give up their safe House seats to challenge him. Now, with a 2013 primary, Reps. Frank Pallone and Rush Holt (and possibly Rob Andrews as well) will not be risking their day jobs to run. Pallone, who has a hefty bank account, is among those Democrats who resent Booker's angling for the Senate while Lautenberg was still wrestling with a decision about running again (or at least angry that Booker didn't, in their minds, have the courtesy to wait for the senator to announce his retirement). Lautenberg himself didn't hide his disdain for Booker. Such a Democratic primary could be nasty and brutal and, possibly, help elect the Republican candidate — something that hasn't happened in New Jersey since 1972.

To get on the August primary ballot, candidates need to file petitions with at least 1,000 signatures by 4 pm Monday.

The Lautenberg record. First elected in 1982, Lautenberg won again in 1988 and 1994. He retired from the Senate after 2000. But in late 2002, Sen. Robert Torricelli (a fellow Democrat but a Lautenberg rival) found himself caught in a campaign finance scandal and resigned his seat. Democrats pleaded for Lautenberg to come out of retirement and run again, which he did. Re-elected in a landslide in 2008, he was the longest serving senator in New Jersey history.

During his long tenure in the Senate, he was a strong proponent of gun control; just last month, while seriously ill, he voted to expand background checks for gun buyers. He also played a pivotal role in the passage of Obama's healthcare bill, the banning of smoking on airplanes, tougher drunk-driving and environmental protection laws.

New member. State Rep. Jason Smith (R) easily won Tuesday's special election in Missouri's 8th Congressional District to succeed Jo Ann Emerson, a Republican who resigned in January to head up the National Rural Electric Cooperative Assn. Smith defeated state Rep. Steve Hodges (D) by 67-26 percent. Hodges, who ran stressing his support for gun rights and opposition to abortion, nonetheless was portrayed by Smith as "in the pocket" of President Obama and former House Speaker Nancy Pelosi, neither of whom are especially popular in this very conservative district. Republicans have held the seat since Emerson's late husband, Bill Emerson, ousted a Democratic incumbent in 1980.

Dingell was first elected in December 1955, a special election held three months after the death of his father, John Dingell Sr., who had served since 1933.

Political Junkie segment on Talk of the Nation. Each Wednesday at 2 p.m. ET, the Political Junkie segment appears on Talk of the Nation (NPR's call-in program), hosted by Neal Conan with me adding color commentary, where you can, sometimes, hear interesting conversation, useless trivia questions and sparkling jokes. Last week's show focused on the problems faced by attorneys general in recent history, with special guests George Terwilliger, the acting A.G. during the George H.W. Bush administration, and David Yalof, a political science professor at the University of Connecticut and author of Prosecution Among Friends: Presidents, Attorneys General, and Executive Branch Wrongdoing. You can listen to the segment here:

And Don't Forget ScuttleButton. ScuttleButton, America's favorite waste-of-time button puzzle, can usually be found in this spot every Monday or Tuesday. A randomly selected winner will be announced every Wednesday during the Political Junkie segment on NPR's Talk of the Nation. Last week's puzzle can be seen here. Sure, there's incredible joy in deciphering the answer, but the winner gets not only a TOTN T-shirt, but also a 3-1/2 inch Official No-Prize Button! Is this a great country or what??

June 25 — Special Senate election in Massachusetts to replace John Kerry, who is now secretary of state.

This day in campaign history: Sen. Robert F. Kennedy, just moments after declaring victory in yesterday's Democratic presidential primary in California, is shot by Sirhan Sirhan, a 24-year old naturalized American citizen who was born in Jordan. The shooting took place as the senator was leaving the podium at the Ambassador Hotel in Los Angeles. He had defeated Sen. Eugene McCarthy, a rival for the nomination, 46-42 percent (June 5, 1968). Kennedy died at 1:44 am local time on June 6, some 25 hours after he had been shot. He was 42 years old.