September 30, 2011 • Anwar al-Awlaki may have been one of the most wanted men in the world, but he hadn't been convicted of a crime in American or international courts. Civil liberties groups are arguing the Obama administration may have gone too far by killing Awlaki far away from the battlefield.

September 30, 2011 • Melissa Block speaks with our regular political commentators E.J. Dionne, of the Washington Post and Brookings Institution, and David Brooks, of the New York Times.

Fla. Moves Up Its Primary Date

September 30, 2011 • Florida wants to be no lower than fifth on the calendar of presidential nominating events in 2012, and Friday its Legislature moved to hold its primary on Jan. 31. That is expected to move the Iowa caucuses into the first week of the year.

Fla. Moves Up Its Primary Date 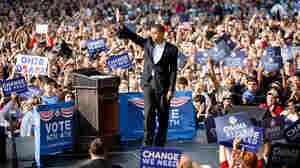 Then-Sen. Barack Obama drew enthusiastic crowds at a rally in Columbus, Ohio, just days before the 2008 election. Now, after a few rocky moments with the coalition that helped send him to the White House, and with a re-election battle looming, Obama is trying to re-energize his supporters. Joe Raedle/Getty Images hide caption

As Election Looms, Obama Seeks To Rouse His Base

September 30, 2011 • In recent days, President Obama has reached out to black and Latino voters. On Saturday, he'll speak to the nation's largest gay rights group, part of an effort to re-energize the coalition that helped send him to the White House. But his governing has left some of his early supporters disappointed.

As Election Looms, Obama Seeks To Rouse His Base

September 30, 2011 • By advancing its primary date to Jan. 31, Florida makes it virtually certain the four traditional early states — Iowa, New Hampshire, South Carolina and Nevada — will now move their caucuses and primaries to earlier in January. Other primaries will shift forward, too. Campaigns will have less downtime around the holidays.

In GOP White House Bid, Who's The Real Front Runner?

September 30, 2011 • Michel Martin continues the political chat with journalism professor Cynthia Tucker, U.S. News and World Report's Mary Kate Cary and Voto Latino's Maria Teresa Kumar. They discuss whether Latinos will prove to be a swing voting bloc in 2012, and whether Herman Cain can sustain his momentum in the Republican presidential race.

In GOP White House Bid, Who's The Real Front Runner?

Vilsack: Not Done With Potatoes And School Lunch

September 30, 2011 • The unsettled GOP race gets a new national frontrunner — the same Mitt Romney who was the old frontrunner. But dissatisfaction with the field remains, as renewed focus is placed on Chris Christie. Plus: Herman Cain's 15 minutes after winning the Florida straw poll lasts only five. 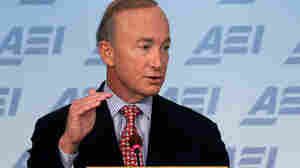 Social Security has been compared to Ponzi schemes for decades, says Indiana Gov. Mitch Daniels. In his new book, he lays out ideas for improving the system. Mark Wilson/Getty Images hide caption

September 29, 2011 • A few members voted Thursday in five minutes and two seconds to keep the government funded for four days — or until their colleagues return next week. Astonishing, considering it took the entire months of June and July for Congress to decide to continue paying bills it had already incurred.

September 29, 2011 • The toughest-in-the nation measure went into effect Thursday, one day after a federal judge held up key provisions. But opponents and supporters expect the legal fight to continue. 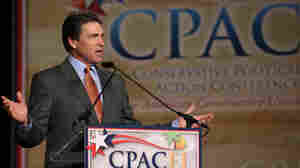 Can Rick Perry Regain His Momentum?

September 29, 2011 • The Texas governor rocketed to the top of the field after he entered the race for the GOP presidential nomination last month. But his wobbly debate performances have reversed his momentum and led many Republicans to say he needs to make some big changes — and fast.

Can Rick Perry Regain His Momentum?

September 29, 2011 • The Massachusetts governor may be back on track to the Republican presidential nomination. His rival from Texas has lost much of his initial luster because of dubious debate performances and controversial stances on at least three issues.