Accessibility links
NPR Presents Michel Martin: Offense or Defense? : NPR Presents Tackling the ethics of football, on and off the field. NPR's Michel Martin takes the studio to the story and heads to Dallas, T.X., for a live, on-stage conversation. 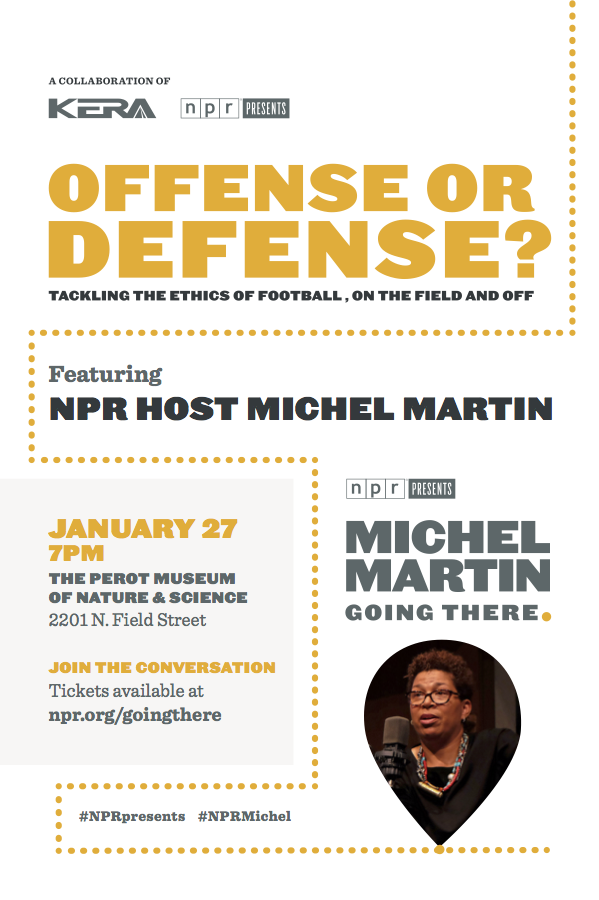 Hands down, football is the most watched sport in America. It has also become one of the most controversial, and conversations around it now tackle much more than what happens ON the field. From concern over the long term health effects of the sport, to worries that its culture encourages violence off the field, who speaks for football?

In collaboration with NPR Member station KERA, Michel Martin brings together voices that don't often have a chance to be heard: Former players, spouses and others, all of whom are directly affected by the sport that millions love but others have come to hate. Joining Martin on stage in Dallas will be Nate Jackson, former Denver Bronco and author of 'Slow Getting Up: A Story of NFL Survival From the Bottom of the Pile'; Melani Ismail, who was featured on VH1's Football Wives and is married to former Dallas Cowboys player Rocket Ismail; along with Texas high school senior and star running back Nahshon Ellerbe, who plans to play football for Rice University next fall.

The event will also feature a theatrical performance of an excerpt from Andrew Hinderaker's Colossal, on football beauty and brutality.

Tickets can be purchased here (seating is limited).