Accessibility links
Biden Education Nominee Miguel Cardona On Reopening Schools : President Biden Takes Office President Biden pledged to reopen most of the nation's K-12 schools during his first 100 days. When asked if that goal was "too optimistic," Cardona said, "No, I think it's strong leadership." 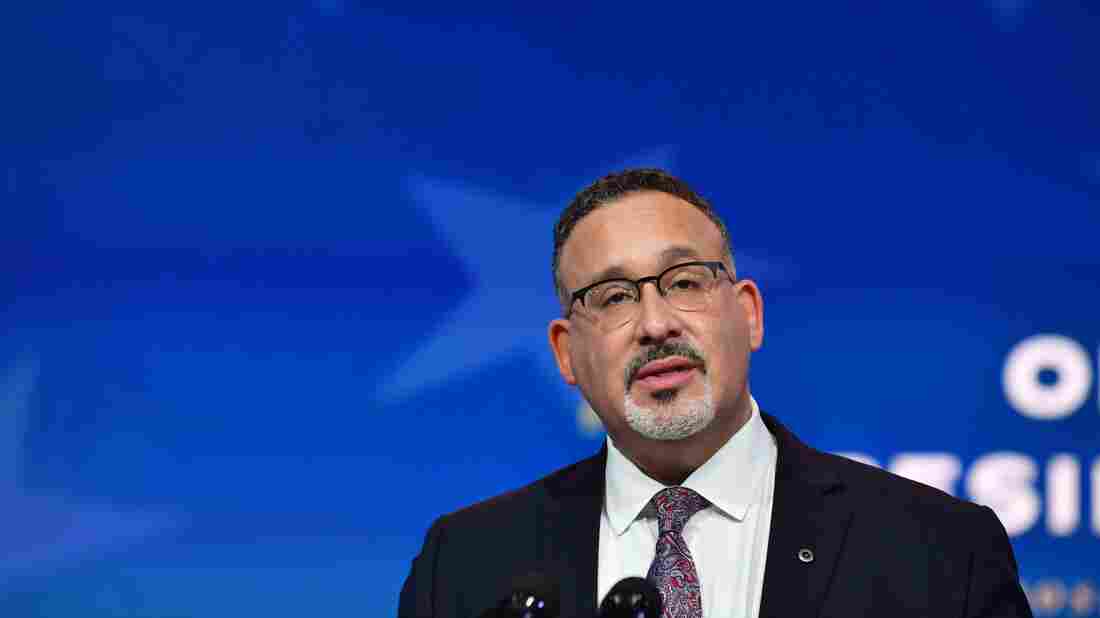 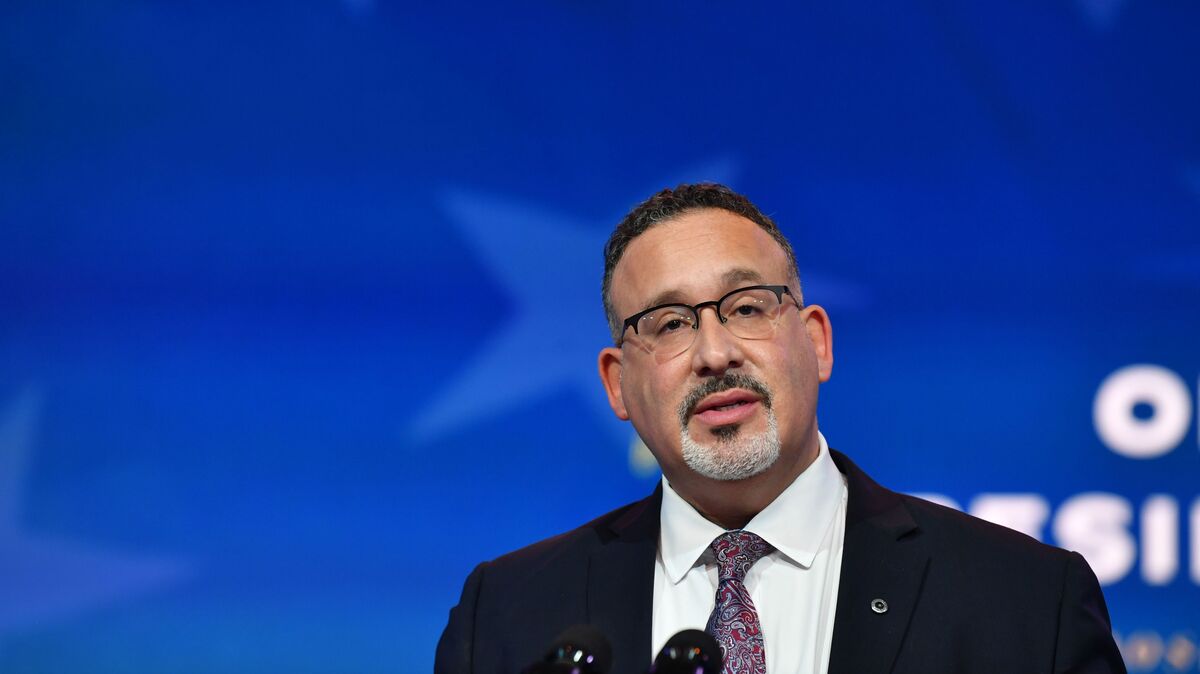 With many U.S. schools still shuttered or operating on a limited basis, and millions of children learning remotely (or trying to), the stakes are high for Miguel Cardona. He is President Biden's pick to run the U.S. Department of Education, and if confirmed, he'll be charged with making good on Biden's promise to re-open most K-12 schools during the new administration's first 100 days.

When asked Monday if that goal was "too optimistic," Cardona pushed back: "No, I think it's strong leadership."

That answer came in an interview with Lucy Nalpathanchil, host of Connecticut Public Radio's Where We Live, in which Cardona reflected on what it would take to meet Biden's goal.

"Ultimately, we can only safely reopen our schools while we are able to reduce spread and contain the virus," he said, an acknowledgement that, at the moment, the virus' spread remains unchecked in many communities.

Unlike former Education Secretary Betsy DeVos, Cardona has a long public school resume. He began as an elementary school teacher in his hometown, Meriden, Conn., then spent a decade as a principal in the same district, winning Connecticut principal of the year in 2012. Cardona eventually helped run the district as assistant superintendent, until he was tapped in August 2019 to be Connecticut's state commissioner of education. Cardona's tenure overseeing Connecticut's schools was relatively brief and dominated by the coronavirus pandemic.

In a speech accepting his nomination to be the next U.S. secretary of education, Cardona said the pandemic has "taken painful disparities and wrenched them open even wider. ... It has stolen time from our children." In the years to come, he said, "we will carry its impacts."

During Monday's interview, when Nalpathanchil asked what the U.S. Department of Education, under his leadership, could do to help schools re-open, Cardona began by promising state and school leaders clear, science-driven guidance around how to safely reopen and manage schools during a pandemic, something they did not get from the Trump administration.

With Biden's COVID-19 plan, Cardona said, school leaders can expect "consistency in messaging," and a national strategy that can inform and drive local efforts. He said one of the most important lessons he had learned guiding Connecticut's schools is that decisions around closing and reopening should be made in "very close partnership" with local health officials.

"At the national level, that's critically important that we work with CDC, that we work with Health and Human Services to make sure that the decisions that are being made around schools are in line with what we know [can] protect people," Cardona said.

But Cardona also made clear he does not see it as the education secretary's job — or even within the secretary's authority — to force school districts to adopt these science-based strategies, including requiring teachers and students to wear masks.

The department's role "is really to support states who are working to develop policies... to safely reopen schools," Cardona said.

"What we do know is, in Connecticut, students and staff members wearing masks helped prevent spread in schools... And for many students in Connecticut, they have been learning in the schoolhouse since August."

According to state data, as of December 2020, roughly 22% of Connecticut's students were fully or mostly in-person, 42% were hybrid while 36% were still fully or mostly remote.

The Biden Education Department's primary role in this pandemic, as envisioned by Cardona, would be as a communicator of best practices — not as a top-down enforcer.

Another example: Would Cardona consider a national summer school, to help students make up some of the ground they've lost having to learn remotely?

"The federal role is to support our states, and to make sure that we're providing guidance and support where they need it," Cardona answered. If districts want to move to a year-round school model — or offer a more intensive version of summer school — they're welcome to. He said his department would back them up not only with guidance but, hopefully, with federal resources.

Biden has pitched a relief package that would provide K-12 schools with $130 billion to cover the high cost of reopening during a pandemic.

On the subject of learning loss during the pandemic, Cardona said, "We know that, for far too long, our Black and brown students haven't achieved at the same level as their white counterparts. And this is prior to the pandemic."

Of the equity and opportunity gaps that have driven those long-standing differences in student achievement, Cardona said, "It's really our responsibility to identify what those gaps are, how they've been exacerbated [by the pandemic], and how we can better utilize the resources to target them and help support our learners in greatest need."

Beyond talk of the pandemic, Cardona also weighed in on the movement, among many Democrats, to push for student loan forgiveness. While he said it "would be a priority for me," he made no mention of trying to forgive debts unilaterally and instead emphasized his intentions to work with Congress, "to make sure that we're targeting the support for those students that need it the most." That includes students who may have dropped college plans because of the pandemic as well efforts to make community college more accessible.

"Those are the students that we want to re-engage and provide support for, to make sure that they have access to the American dream," Cardona said.

Cardona's first challenge, though, is preparing for his Senate confirmation hearing, which has not yet been scheduled.

Eda Uzunlar is an intern on NPR's Education Desk.