Accessibility links
OMB Nominee Neera Tanden Apologizes For Past Insults To Republicans : President Biden Takes Office President Biden's pick to lead the Office of Management and Budget apologized for previously insulting Republicans and promised to work in a bipartisan manner if confirmed. 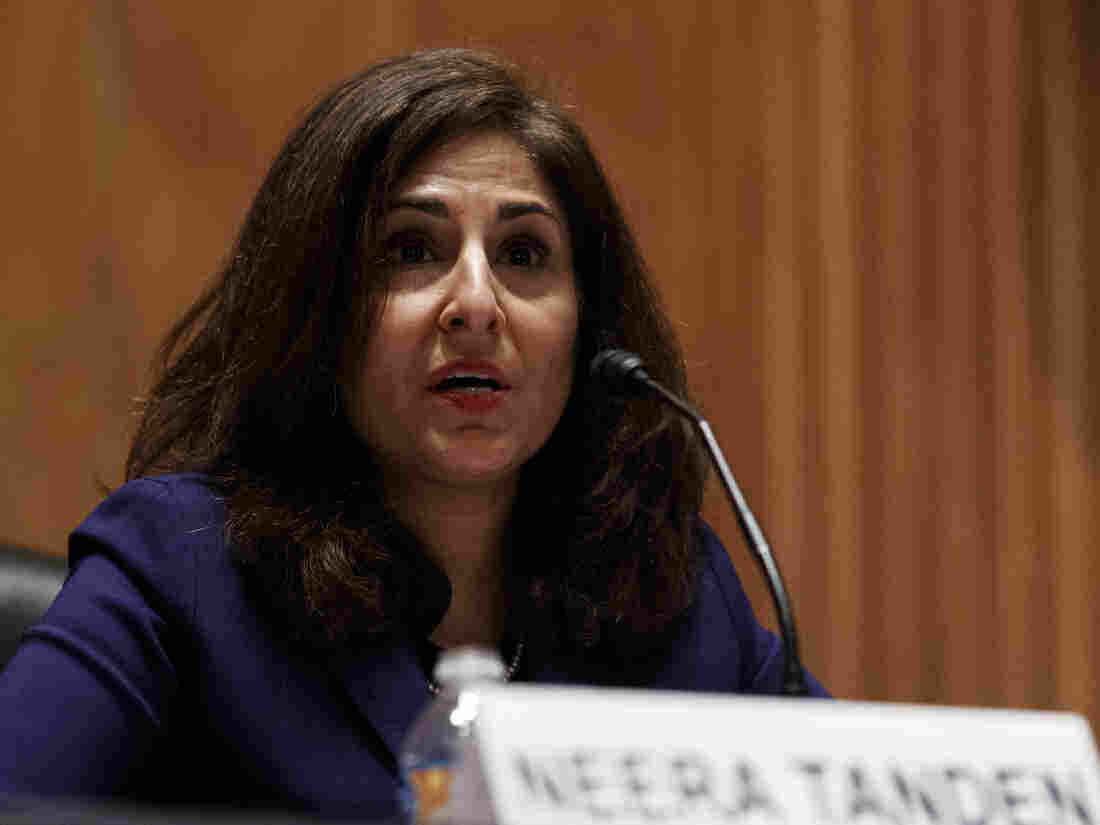 Neera Tanden, President Biden's nominee for director of the Office and Management and Budget, speaks during a Senate Homeland Security and Governmental Affairs Committee confirmation hearing on Tuesday. Tanden apologized for past insults to Republicans. Ting Shen/Pool/Getty Images hide caption 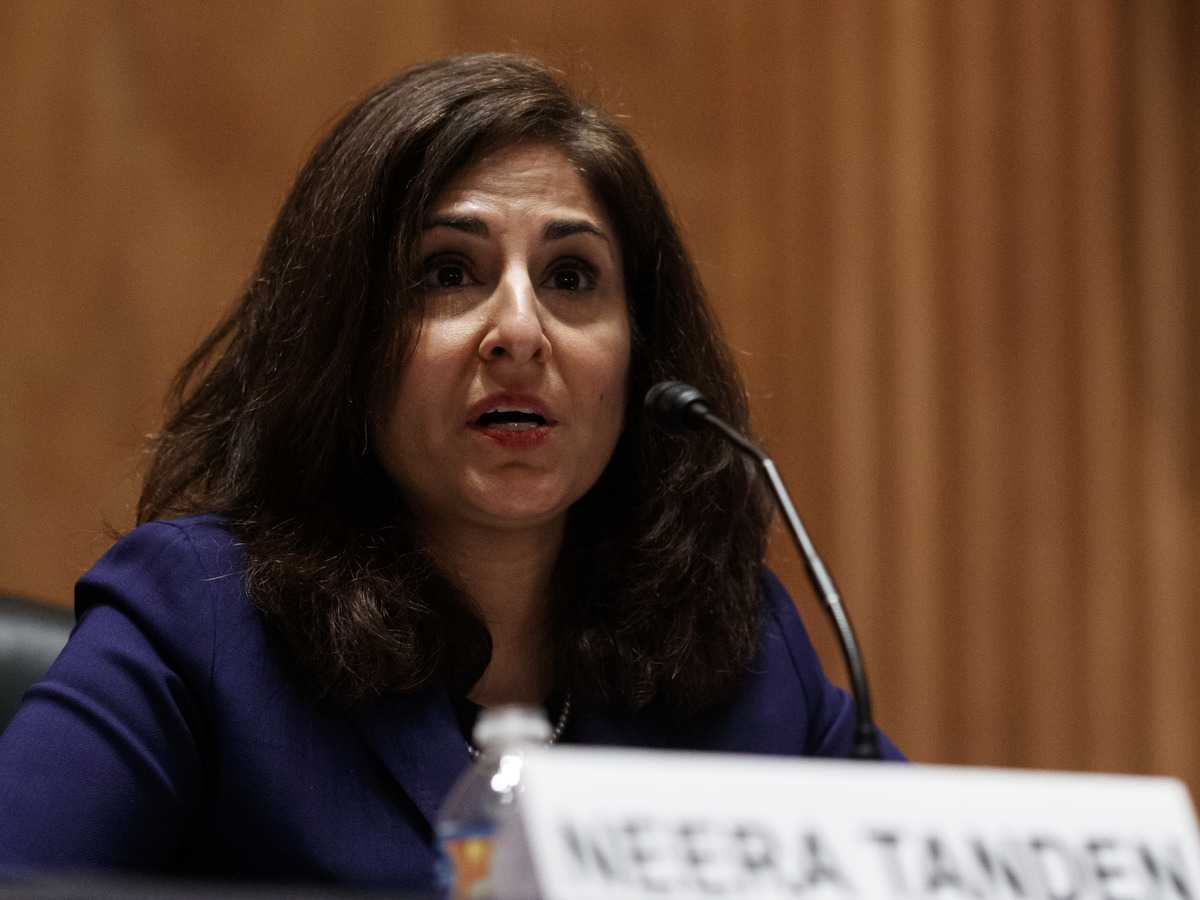 Neera Tanden, President Biden's nominee for director of the Office and Management and Budget, speaks during a Senate Homeland Security and Governmental Affairs Committee confirmation hearing on Tuesday. Tanden apologized for past insults to Republicans.

It was an apology tour of sorts.

Neera Tanden instantly became one of President Biden's most polarizing Cabinet nominees when she was selected to head the Office of Management and Budget because of sharp-elbowed comments she had made about Republicans while running a left-leaning think tank.

So at her confirmation hearing on Tuesday, Tanden was contrite, apologizing for her remarks. She also promised to work in a bipartisan manner if she's confirmed.

"I do think the last several years have been very polarizing and I apologize for my language that has contributed to that," Tanden told members of the Senate Committee on Homeland Security and Governmental Affairs. "I know it's on me to demonstrate to this committee and to Republican members and Democratic members I can work with anyone."

Tanden acknowledged that her partisan advocacy as CEO of the Center for American Progress had sometimes strayed into personal attacks on senators, especially on Twitter — a fact that Senate Republicans were quick to highlight.

"You wrote that Susan Collins is, quote, 'the worst.' That Tom Cotton is a fraud. That vampires have more heart than Ted Cruz. You called leader McConnell 'Moscow Mitch' and 'Voldemort,' " complained Sen. Rob Portman, R-Ohio. "How do you plan to mend fences and build relationships with members of Congress you have attacked through your public statements?"

Tanden said she regretted the tone of some of her tweets, and noted that she had deleted many of them.

"For those concerned about my rhetoric and my language, I'm sorry," Tanden said. "I'm sorry for any hurt that they've caused."

Republicans' complaints would carry more weight if they still held the majority in the Senate. But with Democrats now controlling the chamber, the GOP has little power to block Tanden's confirmation.

Tanden would be the first woman of color to lead the budget office, as Biden strives to create the most diverse Cabinet in history.

She would also play a large role in crafting administration budget proposals and in overseeing federal regulations.

During the hearing, Tanden pushed for the president's $1.9 trillion economic relief package.

"The economy is still deeply challenged," she said. "We have 10 million more people unemployed than we did a year ago. That is a lot of human suffering. We also are continuing to see increased small business failures."

In her opening remarks, Tanden recalled how her single mother relied on food stamps and federal housing vouchers before ultimately climbing into the middle class.

"I spend every day grateful for a nation and a government that had faith in my mother and in me, that invested in our humanity and gave me a fair shot to pursue my potential," Tanden said. "My path in life would never have been possible without budgetary choices that reflected our nation's values."

She noted that African Americans and Latinos have been especially hard hit by the coronavirus itself and by the economic problems it triggered.

"We have to carefully monitor that we don't see the same kinds of inequities in vaccine distribution which is a matter of life and death," she said. "It is vital that our government address the needs of all communities."

Tanden previously served in the Clinton and Obama administrations, and was an adviser to Hillary Clinton's presidential campaign in 2008.

Republicans are not the only ones to have complained about Tanden.

She has also drawn some opposition from supporters of Sen. Bernie Sanders, I-Vt.

Sanders now chairs the Senate Budget Committee, which will hold its own hearing on Tanden's nomination on Wednesday.