Accessibility links
Don't Take Away Helen Thomas' Front Row Nameplate : NPR Public Editor Legendary reporter Helen Thomas made a mistake but it's not one that should define her career — nor should the White House strip her nameplate from the front-row seat she just gave up.

Based on recent coverage, one might think legendary journalist Helen Thomas had died.

She hasn't and I hope when that event happens that her recent hideous error of judgment will not be the lead of her obituary.

She doesn't deserve that. 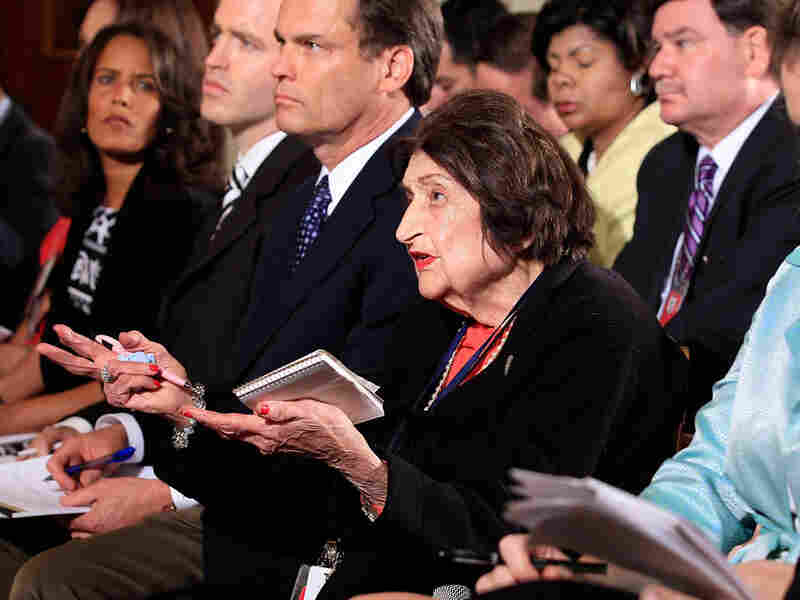 As many know, the 89-year-old Thomas exposed her pro-Palestinian bias in late May by telling a rabbi that Jews should "get the hell out of Palestine" and "go home" to Germany and Poland. She abruptly retired Monday.

The comment was unconscionable even for a columnist, which Thomas has been for Hearst newspapers during the last decade.

But the uproar she created at the end of her long career should not be her legacy.

Nor should the White House remove the small plaque on the chair she occupied for 50 years. Other seats bear a news organization's name; but Thomas' seat in the front row right under the press secretary's podium declared her name.

Female journalists owe a lot to Thomas. It is on her shoulders and those of a few other female reporters of her generation (including AP's Fran Lewine and the New York Times' Nan Robertson), that we were able to stand and be recognized as equally capable, and often better at, reporting the news.

Thomas has a slew of firsts to her name that I believe no other female journalist can equal after five decades covering 10 presidents:

Thomas had to force her way into those male territories and she did so by being tough, relentless and often extraordinarily blunt. (See Dana Milbanks' piece.) Ultimately, she helped to mitigate the anti-feminist attitudes then common among Washington's largely male press corp.

As soon as Thomas graduated from Wayne State University in 1942 with an English degree, she high-tailed it from Detroit to Washington, and landed a job as a copy girl at the Washington Daily News, where she got coffee and donuts. After she lost that job, she joined United Press International in 1943 — before Presidents Obama, Clinton and George W. Bush were even born.

Thomas, according to Current Biography, was hired "to write local news--almost exclusively reports on 'female' subjects--for its radio wire. During the twelve years that she had that assignment, her workday began at 5:30 a.m. and usually lasted into the evening. Those long hours failed to dampen her enthusiasm."

In 1961, Thomas began covering the White House for UPI, then one of the country's two main wire services. She competed head-to-head with the AP's Lewine. "The two wire services provided news to virtually every newspaper, radio and television station in the nation," according to Pat Sullivan's Washington Post's obit for Lewine.

Even though Thomas and Lewine were good friends, they still worried about being scooped by one another. "We were inseparable, very competitive," Thomas told the Post. "At the end of the day, we always went out to dinner and were friends. But if either of us had an exclusive, it stayed an exclusive."

In 1974, Thomas was named UPI's White House bureau chief. Throughout her career at the White House, she was a true thorn in the side of every president since John F. Kennedy and each of his press secretaries.

"I think that presidents deserve to be questioned, perhaps irreverently, to bring them down to size," she told Rory Kennedy, who made an HBO documentary about Thomas entitled, "Thank You, Mr. President."

She retired from UPI in 2000 and began writing a column for Hearst. In the last several years, Thomas became more known for her outspokenness against the wars in Afghanistan and Iraq. Her anti-Israel comments are not suprising to journalists who have known her views for a long time.

Thomas often made cringe-worthy remarks, and her colleagues tolerated them because she's the famous Helen Thomas. I was on a book panel with her in 2007 and wanted to contradict half of what she said about journalism, feeling she'd lost all objectivity.

Yet in all those years, the woman with the feet of clay, maintained her front row seat, one of 49 seats the White House press corps reserves for working reporters — not columnists.

"Helen was an exception in that she had the seat assigned to her as an individual," David Jackson, incoming president of the White House Correspondents Association, told the Poynter Institute. "It was a special case. She had been considered such a trailblazer that the previous board let her keep it."

Give away her coveted seat. Some other news organization deserves it.

But don't take down the name plate that honors the most famous female journalist ever to cover 1600 Pennsylvania Avenue. And the rest of us should not allow one ill-conceived remark to make us forget the accomplishments of a genuine journalistic pioneer.

Editor's Note: This piece by Alicia Shepherd does not in any way represent the views of NPR as an organization or the views of its news editors. No editors or executives approve the Ombudsman's writing prior to publication in order to preserve the independence of the position. The stated mission of the Ombudsman is to be "the public's representative to NPR, serving as an independent source regarding NPR's programming."

Because this particular column does not pertain to an editorial issue at NPR and because it expresses an opinion about a very controversial subject in the news, I must state clearly and unequivocally that this column does not reflect the views of NPR, its editors or employees. Further, we deeply regret any controversy and misunderstanding it has caused by expressing a view many find offensive. --Dick Meyer, Executive Editor, NPR News.