Accessibility links
NPR Employees And Political Rallies: Facts Behind The Controversy : NPR Public Editor NPR sent a memo Wednesday advising its staff not covering the Jon Stewart-Stephen Colbert rallies on Oct. 30 to stay away. Why the fuss?﻿

NPR Employees And Political Rallies: Facts Behind The Controversy

NPR Employees And Political Rallies: Facts Behind The Controversy

One never truly knows what a lousy job the blogosphere is capable of until one is at the center of a story.

NPR experienced the dark side of the blogosphere this week after management sent a memo to staff reminding them that journalists may not participate in political activities of any kind. 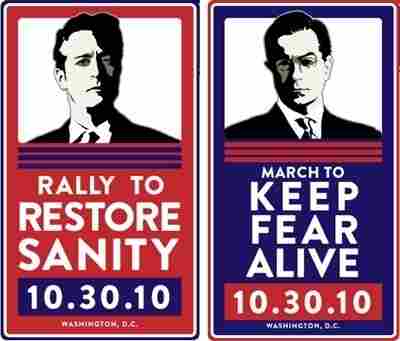 Sent Wednesday morning, it expressly said employees could not attend the rallies in Washington on Oct. 30 hosted by comedians Jon Stewart and Stephen Colbert.

The memo failed to mention that NPR would cover the rally, and thus opened the network to host of charges on the Internet, all false, such as:

Yes, these are some of the accusations I’ve heard since Ellen Weiss, head of NPR’s news department, sent the memo reminding staffers that, with elections around the corner, they must abide by NPR’s Ethics Code.

She added: “NPR journalists may not participate in marches and rallies involving causes or issues that NPR covers, nor should they sign petitions or otherwise lend their name to such causes, or contribute money to them. This restriction applies to the upcoming John (sic) Stewart and Stephen Colbert rallies.”

NPR sent the memo to Romenesko, a popular site that aggregates stories about the news media. Jim Romenesko, who curates the blog, wrote a quick synopsis and linked to it. His headline was misleading:  “NPR staff told to stay away from Colbert, Stewart rallies.”

The three most popular themes: “How can you cover it if you are not allowed to attend?” “Did NPR send out the same email for Glenn Beck’s rally?” “How can NPR control what its employees do outside work?”

NPR might have avoided the flood of criticism and the misperceptions if the memo had been worded differently.

It should have stated:

NPR executives should have been more careful in wording the memo since they sent it to Romenesko, and therefore knew it would get much wider distribution. [One reason they sent it was to prompt other news organizations to weigh in.]  Read Michael Calderone’s Yahoo piece.

The Stewart-Colbert rally is a news event. Tens of thousands are expected. NPR will cover it – just as it covered the August “Restoring the Honor” rally hosted by Fox News’ Glenn Beck on the National Mall.

Romenesko later amended his posting to note that NPR's ban applied only to those not covering the rally. But by then tweets, emails and links had lit up the Internet.

Another problem was that by warning staff not to attend the Stewart-Colbert rally NPR opened itself up to questions on how it handled Beck’s rally and the Oct. 2 gathering on the Mall for the “One Nation” progressive rally.

NPR did not advise staff to not attend those two rallies.

One could draw various conclusions from NPR warning its staffers away from one rally during an election season but not others.

Some who wrote insisted that it is now crystal clear NPR is a left-leaning organization because its staffers would not have wanted to attend the Beck rally but might want to attend the Stewart-Colbert rally.

Others insist the opposite is the case: NPR must be a right-wing organization because it didn’t prohibit staff from attending the Beck rally. Management said it wasn’t necessary because Beck’s rally was clearly political.

I will take management at its word. The memo was sent because some staffers were unclear if the rallies are political.  Stewart and Colbert are comedians and entertainers – not politicians. Their shtick is to poke fun at politicians of all stripes, Democrats included.

“Rules against participating in political rallies are a cornerstone of journalistic ethics at all legitimate news organizations – and for good reasons,” said NPR CEO Vivian Schiller. “So I'm not clear what all the hyperventilating is about."

“We flagged the Jon Stewart rally by name because a reasonable person might misconstrue it as an entertainment event,” she continued. “Regardless of the promotion or Stewart's intention, his rally has become as political event – and therefore off limits.”

NPR could have handled this better – and avoided the need to post a defensive blog late Wednesday.

“Of course, it’s amusing that NPR had to back pedal and explain why a similar memo didn’t go out about Glenn Beck’s rally,” wrote media expert Jeff Jarvis on his blog. “That, the network explained, is because Beck’s was overtly political. Oh, come on, we’re not that dumb. It’s because NPR people are not Beck people. NPR people are Stewart people. They have a sense of humor. Oh, and they’re liberal. No guessing needed.”

But there’s another, more important issue than management botching a memo.  The question arises in every election season, and boils down to this: If you become a card-carrying journalist, do you have no freedom outside of work?

“Word on the street is, NPR has forbidden its employees from attending the “Restoring Sanity Rally” in DC on October 30,” wrote Tennille Merkle, of Upland, IN. “I can understand not wanting an official NPR presence on the Mall that day. But what employees do on their time off, anonymously, is their business, not their employer's.  The “Restoring Sanity” rally is not a criminal activity. Relax and let NPR's employees attend the rally if they so choose.”

“First, this is America and you make yourself into a dictatorial employer when telling employees what they can and cannot do on their free time,” he said. “Secondly, you detract from the rallies by this stance and set a terrible precedent to other employers nationwide. Be exemplary, take the high road and act like an American Organization not some 3rd world dictatorship.”

Media guru Jarvis agrees with these views.  He even encourages NPR staffers to protest management’s decision. “Use social media, folks, and have an opinion about opinions,” he wrote.

Sure, journalists have opinions and causes they support.

But at the end of the day, they have to be professional – and that means avoiding actions that create the perception that they are taking sides in political controversies, including elections.

Specifically, mainstream journalists can’t put a political sign in their yard or carry one at demonstrations. They can’t donate money to candidates. They can’t sit on a school board. They can’t participate in political rallies. They can’t lobby, and they can’t become partisan activists.

To me, it’s a small price to pay for the privilege of being a journalist.

NPR is not restricting its staff’s freedom. It’s protecting its credibility as a news organization that tries to give its audience fair, non-partisan coverage.

No doubt listeners will be watching closely to see how NPR covers the Stewart-Colbert rally.

Here’s how NPR covered the One Nation rally: