Accessibility links
Weekend Edition Segment on Food Stamps Callous or Balanced? : NPR Public Editor In one listener's objections to a segment about food stamps, signs of more liberal criticism of NPR. But who's responsible for the poor?

Discussing Food Stamps And The Poor: Callous or Balanced?

Discussing Food Stamps And The Poor: Callous or Balanced? 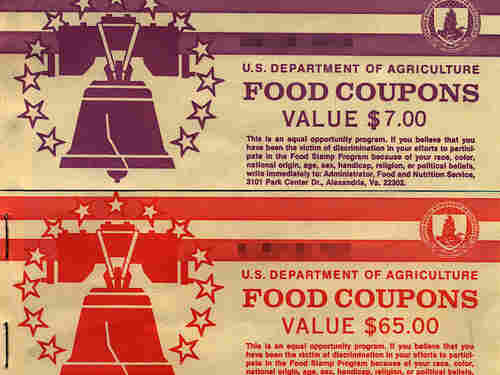 Gary Richardson called from West Virginia so upset that he could barely explain why. NPR, he said, was turning against the poor.

Richardson was set off by a segment on Weekend Edition Sunday in which senior business editor Marilyn Geewax and guest host John Ydstie discussed the rising use of food stamps. Due largely to low wages and rising food prices, food stamp usage is 70 percent higher than it was than four years ago, Geewax said.

She discussed the obvious human need for the stamps, but also noted the political opposition to the program. Some economists and policymakers argue that food stamps are disincentives to find work or "plant a garden, " she said, while "plenty of taxpayers just object to this idea of having money taken from their paychecks and using it to put food on somebody else's table."

Richardson called the discussion "callous," "glib" and "ugly." Eating is a necessity, he said, and the idea of garden-planting as a solution to hunger struck him as almost absurd. "It used to be that anything I heard on NPR I completely believed," he said. "Now I'm not so sure."

We asked Geewax to respond:

My approach to discussing any economic issue is to keep it simple enough for the average person to understand, while at the same time reflecting the underlying complexities. Food stamps and the minimum wage are two good examples of issues that are both simple...and yet complicated and controversial. On the one hand, food stamps and the minimum wage clearly can help people who are struggling. But some economists see evidence that such government help can have negative impacts, such as creating disincentives to work harder.

As a journalist, I have an obligation to mention the conflicting views on these issues. I never offer my own opinion – that's not my job. I am striving to educate our audience on important economic issues – and that means I have to mention a range of views.

Conservative critics of NPR have been the loudest in recent years, but three months into my job as ombudsman, I am beginning to wonder if the pendulum is not beginning to shift as criticism seems to be growing that NPR is too conservative, as seen in Richardson. It is tempting to say that NPR must be doing something right if both sides are angry, but of course that is not true. The journalism has to stand on its own, and in this instance I am with Geewax. I appreciate Richardson's concern for the poor, but his beef is more properly with some political leaders and their supporters. Geewax correctly reported the various points of view on the issue, allowing listeners to pick the one that they most agreed with.

But you are welcome to tell me that I'm all wet — about food stamps, and about NPR's balance.