Accessibility links
Racism on Fresh Air? Lessons from Archie Bunker and Stephen Colbert : NPR Public Editor Fresh Air repeated a popular 1970s riff on "How to be a Jewish Son," featuring Mel Brooks and David Steinberg on the old David Susskind show. Some shocked listeners said the clip insulted blacks and Jews. Comedy can make us laugh, squirm—and think. Where do you draw the line? 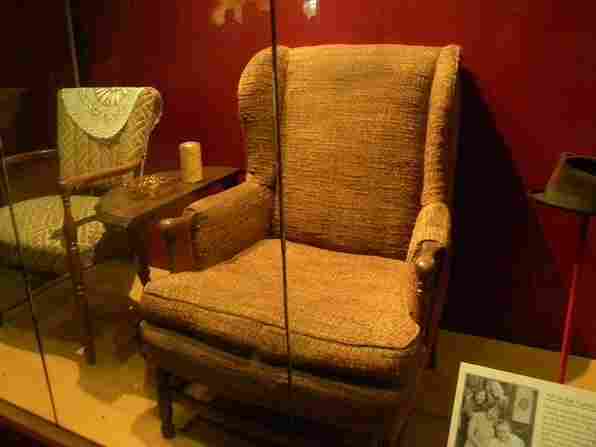 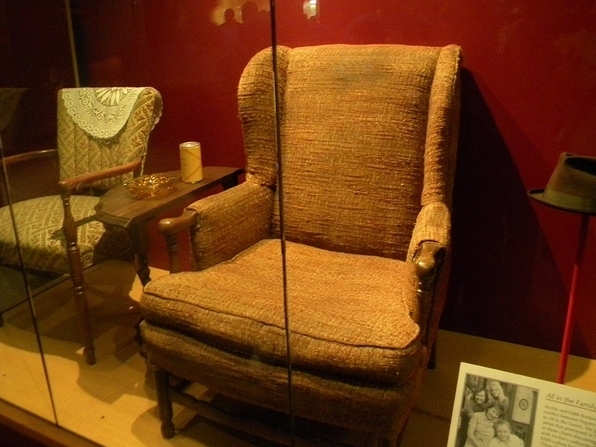 Edith and Archie Bunker's chairs on display in the Smithsonian National Museum of American History.

In 1971, Fred Ferretti wrote an article for The New York Times about a new CBS sitcom called "All in the Family." He asked his readers, "Are racism and bigotry funny?" His conclusion: No.

"What is lacking is taste," he wrote. But the American viewing public apparently disagreed.

The show, featuring Carroll O'Connor as the bigoted Archie Bunker, aired until 1979, winning numerous Emmys and Golden Globe awards. It is such a cornerstone of American culture that today you can visit Archie and Edith Bunker's chairs at the Smithsonian National Museum of American History. As the museum's website puts it, "Their battlegrounds were the very issues dividing American society—ethnic prejudice, women's liberation, and racism. The show's humor revealed the limits of Archie's bigotry, as well as the self-righteousness of his children."

But after a recent Fresh Air segment, several NPR listeners raised the same question as that Times reporter back in 1971.

In a segment about new DVD releases of 1970s talk shows, Fresh Air's TV critic David Bianculli included a sound bite from the "David Susskind Show." Bianculli chose a clip from the most-requested installment of the program, "How to Be A Jewish Son." It featured comedians Mel Brooks and David Steinberg.

DAVID STEINBERG: Well, it's hard to bring a gentile girl home to a Jewish family. What you do is you bring home a black girl first.

DAVID SUSSKIND: By way of breaking the ice.

STEINBERG: Then you bring home the gentile girl and then you're in. Then they say, oh, come on in. Hiya. Would you like something to eat? They say Mary Smith, sit down. See, that "CH" like in "Chanukah."

SUSSKIND: Your father's being a rabbi--

BROOKS: Do you know, in a Jewish religion if you're going with a Jewish girl, if you're just engaged to her and you break off you still pay alimony?

Did you know that? I bet you didn't know that.

BROOKS: It's not a lot but there is a token, a token, like 80 percent of your income.

Shortly after the segment aired, an email arrived in our inbox—a listener found the segment to be racially offensive. Several others said the same online. Marilu Carter wrote that she was "disheartened, disappointed, and alarmed" by the piece. Listener John Abbot said: "Certainly highlighting racist humor, even in the context of the time, is below the standard I expect from both Bianculli and NPR. Sadly this piece highlights the mutual damage of lateral racism and perpetuates the historic bias existing between African Americans and Jews."

Others disagreed. They argued that Steinberg, himself a Jew, was poking fun at his own religion and at the racism that existed at the time.

Fresh Air is produced by WHYY in Philadelphia—not by NPR—but it is distributed by NPR. Lori Grisham of our office asked Bianculli, a TV critic since 1975 and a professor at Rowan University, if he would explain why he selected the clip. He wrote back:

I encounter the same range of responses from the students in my college classes, regarding TV of the 1970s, when we examine the content of "All in the Family." Some get the true intent of the jokes, some are offended, and some — in both camps — are surprised that such language or content could be televised at all 40 years ago.

That's part of my reason for selecting that specific sound clip. The point of that Susskind Show, and why it has been so requested as a home-video release for so long, is that the guests spoke more and more freely and unguardedly, using humor to explore a very real, rarely discussed subject.

The other reason I selected that clip is that it made me laugh. A pertinent reason, I argue, to choose a sample from a show featuring, among others, prominent comedians.

I am always sorry if anyone is offended by anything I write or play, and never expect people to react the same way to comedy. But my job, as I see it, is to provide a reliable barometer of my own tastes and interests and perspective — and in that regard, I'm comfortable with both the piece and the excerpts in it.

Unlike other examples of ethnic humor that can be much more mean-spirited or hurtful, this joke did not rely on any negative stereotypes about African Americans. It was a mild but loving jab about Steinberg's Jewish parents and their discomfort with their son dating a gentile girl (or "shiksa," to use the Yiddish word I grew up with).

And as the excerpt from the Susskind show continues, Mel Brooks picks up the thread (making fun of his own tribe) with his alimony joke, which one could argue is a little sexist and/or a product of its time. But I'd hate to live in a public radio world where only the safest bits of humor, which couldn't possibly offend anybody, are allowed on the air. That would wipe out a lot of enjoyment which I think we bring our listeners.

But that said, everyone gets to choose for themselves what is offensive to them. Like humor, this is very subjective territory. I try to be very sensitive to anything we broadcast which might be truly hurtful or deeply offensive to listeners, and I know there is always a risk that someone will find a joke offensive, but our goal is to engage, not to push listeners away. Like all of our editorial decisions, we make these choices in good faith, with the best interests of our audience in mind.

I certainly appreciate the concerns of the offended listeners. Beyond the surface insults that listeners felt, moreover, is a phenomenon that sociologists call "selective perception." This means that each of us can see the same event, such as a football game, but come away with a different perception of what actually happened, depending on our bias. In the case of the game, the bias results from which team you rooted for. This selective phenomenon extends in a big way to listening, seeing or reading news stories. Worse, it may be growing in importance as the nation becomes more polarized and biases stronger.

In the case of "All in the Family," for example, a study by Neil Vidmar and Milton Rokeach in the Journal of Communication found that selective perception helps explain why the show was so popular. According to the authors, non-bigots understood the intention of the series and found confirmation of their views in the jokes. Carroll O'Connor in real life was an outspoken defender of liberal and civil rights causes—as was the show's producer, Norman Lear.

Some bigoted viewers, however, perceived the series in the opposite way: it re-affirmed their bigotry. To them, Archie Bunker was both funny and speaking truths, according to the studies.

This then raises the question of whether NPR, and the shows it distributes such as Fresh Air, should avoid picking content that might offend even a small minority of the audience

The question is a difficult one, but in the end I come down on the side of Miller and Bianculli. The reality of bigotry exists whether we ignore it or not. Poking fun at it combats it, even if it doesn't convert all listeners. I think that most African Americans and Jews understand the clear intention of the humor and go along. But I could be wrong.

In a related academic look at contemporary humor, Jonathan P. Rossing, an assistant communications professor at Indiana University, studies popular humorist Stephen Colbert, star of Comedy Central's "The Colbert Report." On the show, Colbert fakes being a reactionary news pundit who, among his other regular shticks, claims racism doesn't exist.

In the January issue of Journal of Communication Inquiry, Rossing draws on Colbert's book, I Am America, in which the comedian includes a word search and asks his readers, "How many racial slurs can you find in the grid above?" The grid is riddled with racial slurs, but they are printed upside down. Colbert answers his question: "Zero. Why? Do you see some, racist?"

Rossing notes: "The audience is caught: forced to recognize our inescapable participation in racialized society, yet faced with the contradictory tug toward denial." There is "value in the talking points racial humor provides and the discussion it provokes," Rossing says.

Rossing is writing for other scholars, but his insights are worth consideration by all of us. He concludes:

Rather than dismissing racial humor because it may confirm some racist ideologies or because it fails to address an issue in its full complexity, critical communication scholars should carefully consider the educative and transformative potential of humor. Dismissing racial humor, a popular and pervasive site of racial discourse, notably contributes to a dangerous silencing.

In other words, humor is tricky. It often offends, sometimes deliberately. But it also has the capability to keep open dialogue about racial and other sensitive issues, and to promote self-awareness. It can heal.

But you are sure to have your own opinions. Please share them.

An earlier version included an error in the Fresh Air transcript. David Steinberg told the first joke to David Susskind.