Accessibility links
An Open Letter To A Former Guantanamo Chief Prosecutor : NPR Public Editor A story is not about you, but you feel tarred by implication. Should NPR and the news media add a clarification to the Web story for the record and posterity? The case of a former Guantanamo chief prosecutor raises possibilities and problems. We need a public consensus.

An Open Letter To A Former Guantanamo Chief Prosecutor

An Open Letter To A Former Guantanamo Chief Prosecutor 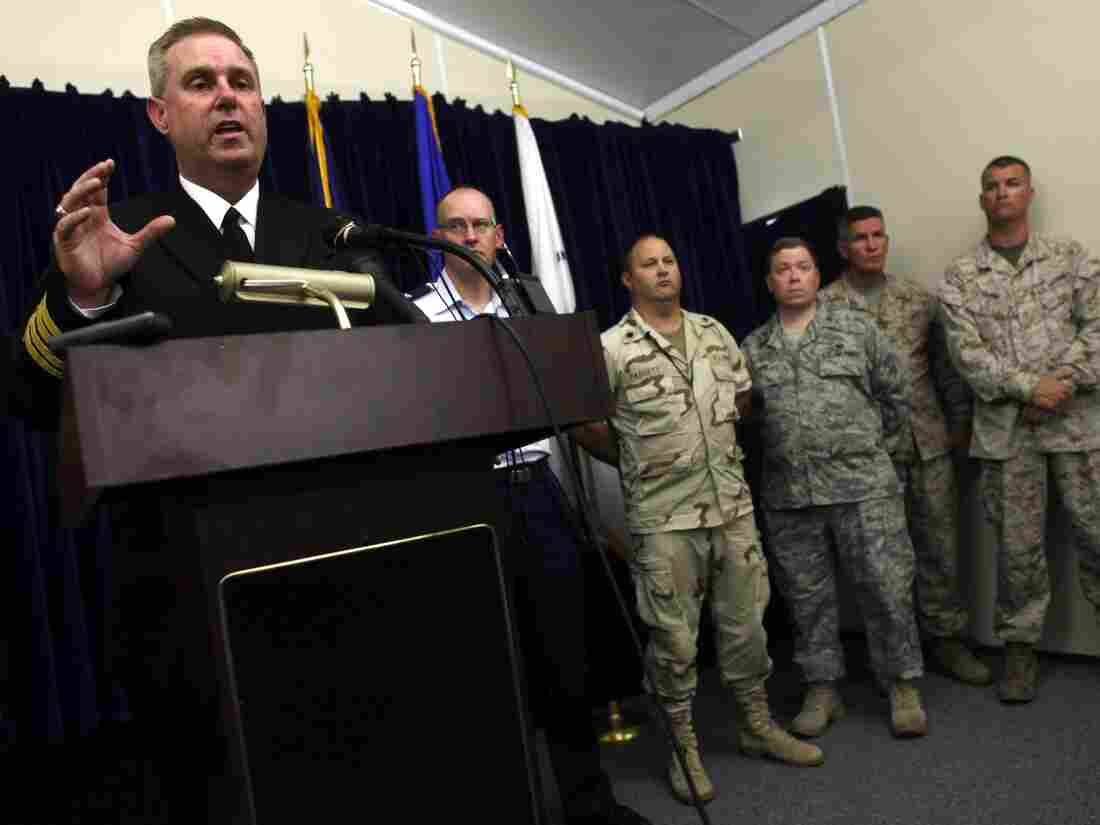 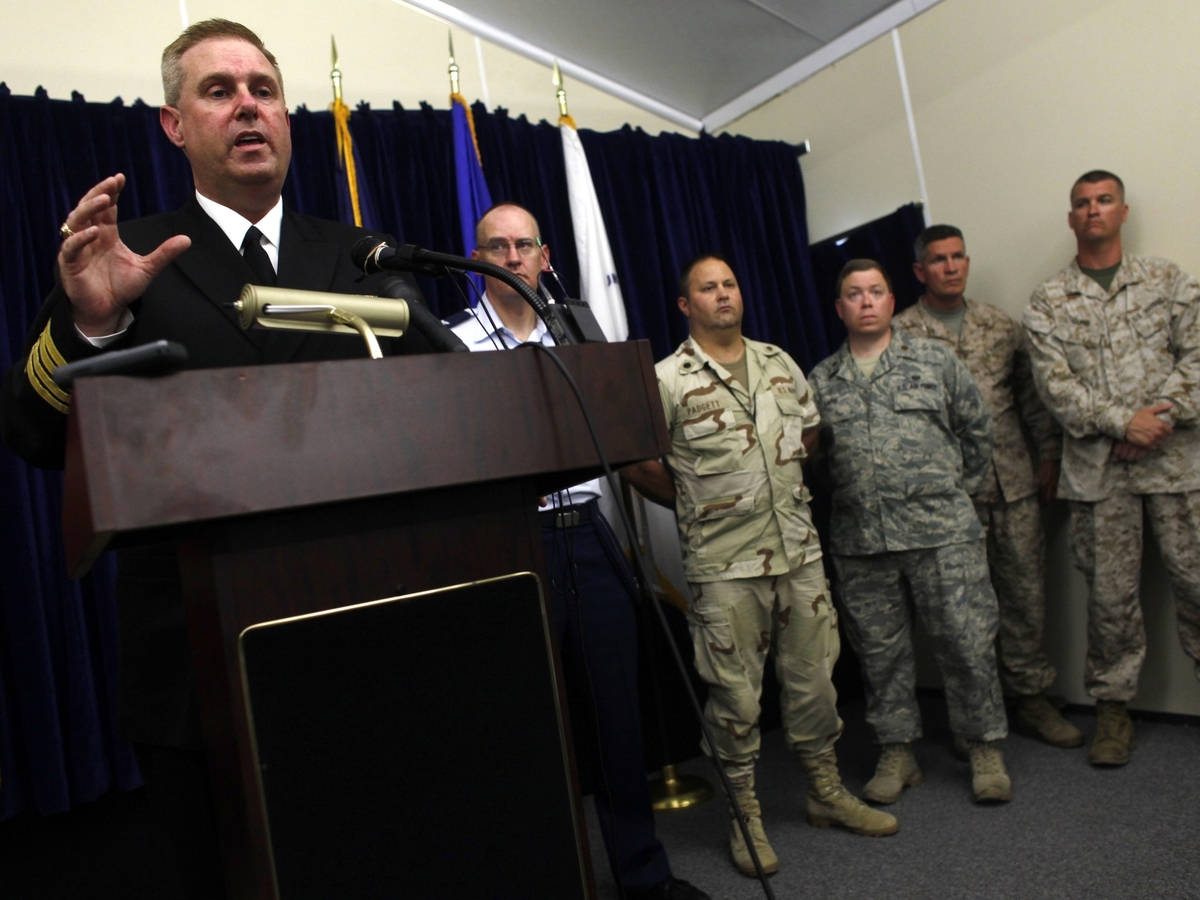 Navy reservist Capt. John Murphy is a former chief prosecutor of the military commission established to try terrorism suspects at Guantanamo Bay. His own case with NPR, however, is filled with implications for the rest of us.

So it is that I am copying all of you on my message to him. Some of you might have informed opinions on how far NPR—or other news organizations—should go in changing or supplementing an old online story that somehow involves us, even tangentially. The story might be technically accurate, but you might feel wronged anyway in a report that will stay online forever for anyone to see.

Your complaint is an intriguing one, though that is probably not the word that you would use. I am sympathetic to your feeling tarred in the broad-brush summary of past Guantanamo Bay chief prosecutors. This is doubly so because I myself served in Vietnam and have separately studied many of the difficult issues involved in guerrilla wars and terrorism. I see that you are both a Navy reserve captain and an assistant United States attorney, which suggests to me that you have looked at the Guantanamo tribunals through many different lenses.

All this said, I have decided not to ask for a correction, but I thought I owed you an explanation why. Over the past several weeks, I consulted with a number of ethicists and First Amendment legal experts on the principles involved in your complaint.

The two NPR stories are factually accurate, but the question you raise is whether you were unfairly damaged collaterally. You are part of a small group of five former chief prosecutors. The stories note that one of the five left under a cloud, but doesn't name which one. Does NPR have a responsibility to name the one, so that it's clear that you as one of the remaining four aren't him? I have to conclude no.

Aside from there being little news value in giving all the names, it is not unreasonable or unfair to expect that if someone wants to know about each of the five that they do the additional research on their own. Or they could ask you, as some people apparently did. I understand that it is embarrassing to be suspected, especially given your position as a U.S. attorney. Public trust in you is key. But you have a good, honest answer to give back.

As it is, the Department of Defense investigated Col. Fred Borch, the former chief prosecutor who left in 2004 under a cloud of accusations of attempting to rig outcomes in the terrorist trials by blocking defense evidence. The department found no evidence of misconduct.

A related question is whether an addendum should be added to the Web versions of the stories as a way of clarifying the record. This might be just a nice thing to do for you, as well as clarifying what happened in the case of Col. Borch. My first instinct was to say yes. But on second thought, after discussion with the newsroom, I have decided that there is no precedence for such a practice and no way to know where to draw the line of when to make such addendums—as opposed to corrections—and when not to. Summaries are by definition the stuff of everyday journalism. No story is a totally complete record.

The two stories were about the current chief prosecutor Brig. Gen. Mark Martins and transparency efforts to assure fairness in a military court process that had come under a lot of criticism. The first report, which aired in February by correspondent Dina Temple-Raston, called Martins "Guantanamo's detox man." From the Web version of the story:

The second report, done in April, also by Temple-Raston, did not mention the rigging accusation on air but says in its Web version:

One chief prosecutor who preceded Martins was accused of rigging the military commissions' process to ensure convictions. Another quit after he said he felt pressured to include evidence derived from torture in commission proceedings. He later said that he left because he didn't feel he could do that in good conscience.

But just as the stories didn't name you or Borch—or note the Defense Department's ruling on Borch—they also didn't name the chief prosecutor who quit in protest, the implication being that perhaps he should be considered a hero. That former chief prosecutor was Col. Morris Davis. Arguably, you could just as easily have been the hero as the goat among the five former prosecutors. I say "arguably" because readers and listeners will decide for themselves how they think the tribunals should be run and what they think of the comportment of each of the chief prosecutors. I don't know your own views or what you did as chief prosecutor and don't need to: they are irrelevant in making my own decision on fairness in NPR's reporting in this case.

But I don't want to totally abandon the idea of grappling with the possibility of doing for-the-record addendums online and defining the lines of when to do so. Adding to the record may not be required, but it can be a nice thing to do, and might even make good business sense. For a non-profit like NPR, just as for the commercial news media, that means attracting audience by serving it. I plan over the coming months to open a professional discussion with colleagues inside and outside NPR on these possible Web addendums. I can see stumbling blocks that might be reasons not to do so. Among them are practical matters of time, staffing, budget and opportunity costs. Do you put limited newsroom resources into adding to past reports or into creating new ones? To what extent should a news Web site attempt to be a complete archive? A single site can never compete with a search engine, after all.

Any discussion of adding to the record broaches a larger issue being debated worldwide of whether and how to change what we consider history by changing the online record. Should some stories be deleted altogether, for example those that are proven to be wrong? The European Union is currently debating a proposal on what is being called "a right to be forgotten." The idea is to give each of us a means to expunge information about ourselves online not only because its inaccurate, but also because we just want to. Or maybe time has passed since we did something wrong or embarrassing, and so we deserve now to have it expunged. These issues get at everything on the Web, and not just in news sites.

Separately, I am passing along your offer to the NPR newsroom and show producers to be available to speak on Guantanamo issues. Who they call is their choice, but it does seem to me that your dual civilian and military perspectives might be valuable.

I know that this is not the answer you wanted. I hope, nonetheless, that you trust that it was one reached with great deliberation and concern, and great respect for you and your positions.

More from the Ombudsman:

ALEC, Common Cause And Peter Overby: When Is The Past Past?