Accessibility links
When A Small Business Owner Is More Than The Title Suggests : NPR Public Editor Otherwise good stories on health care and minimum wage were undermined by presenting an oft-quoted advocate as a typical small businessperson. There was no right wing conspiracy, just a moment of poor journalistic practice.

When A Small Business Owner Is More Than The Title Suggests

When A Small Business Owner Is More Than The Title Suggests 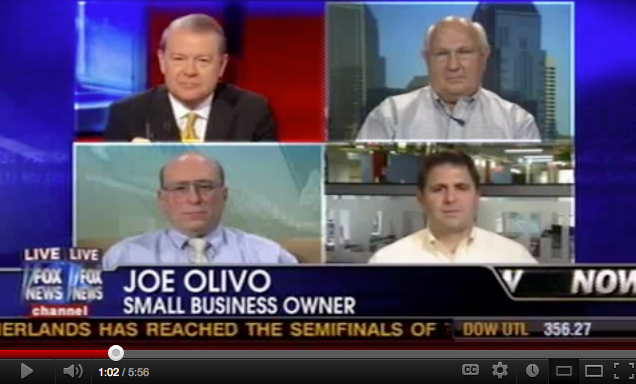 Joe Olivo (bottom right) has been interviewed by several news outlets about being the owner of a small business. This is from Fox News in July 2010. via youtube hide caption Joe Olivo (bottom right) has been interviewed by several news outlets about being the owner of a small business. This is from Fox News in July 2010.

Joe Olivo, the articulate owner of a printing company in New Jersey, has become a poster child for the National Federation of Independent Business in its campaign against the government's new health care program. He has appeared in one of the organization's videos and testified before House and Senate committees.

So, when he was interviewed in two recent NPR stories as a typical small business owner—following interviews of him over the past few years on NBC, Fox (repeatedly), Associated Press and Financial Times and on NPR itself in 2009—a howl went up among liberal media critics and scores of listeners that NPR reporters and editors were either leaning right or lazy.

The reporters and producers did hustle; they just didn't hustle enough.

"Why does Joe Olivo repeatedly get interviewed regarding political policy matters as the voice of a typical 'small business owner' without identification of his standing as vice-chair of the National Federation of Independent Business/New Jersey Leadership Council?," wrote Michael Deal of Buffalo, NY.

NFIB was the lead plaintiff in the recent Supreme Court case on the Affordable Health Care Act, prompting Bob Clancy of Sandia Park, NM, to admonish: "I expect MUCH better from NPR. You're either bought off or didn't do your homework."

Didn't do your homework is the right answer. What we have here is not a matter of ethics or accuracy, but of sluggish journalism. I don't want to say lazy, because the reporters and producers did hustle; they just didn't hustle enough.

As Managing Editor David Sweeney told me, "We should always challenge ourselves when looking for information. Do we have the best source or the right source? This case is an example for all of us to be careful in who we're putting on."

First, some perspective: No one that I know of is saying that the stories quoting Olivo are wrong. Olivo represents just one point of view in them, and his is a legitimate viewpoint. There is no overall right-wing slant in these stories, or a left-wing slant, for that matter. 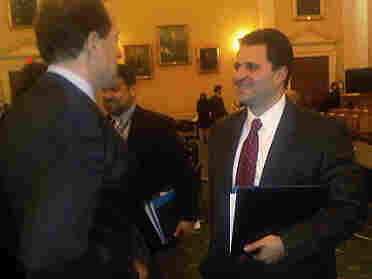 The first story, by business reporter Yuki Noguchi, which aired June 29 on Morning Edition, is in fact about how business owners have mixed views about what the Supreme Court's health ruling means for them and the economy. In a standard 3-minute story, the owner of a frozen custard restaurant in Delafield, WI, is interviewed and says he "jumped up and down and hollered and acted like I was a 10-year old" out of delight over the ruling. He goes on to say that the new law will keep his health care premiums down and allow him to expand his business.

The second story, aired July 8 by Weekends on All Things Considered, was about legislative efforts to increase the federal minimum wage. Most of this 11-minute cover story by host Guy Raz focuses on how the minimum wage has declined 25 percent in real dollars since the early 1970's and comes nowhere near enough to support a family. A Chicago working single mother is interviewed at length.

Each story also includes interviews of an official from the National Federation of Independent Business, each of whom is identified as such. One is the CEO and the other is the chief economist. They respectively give the NFIB's arguments against the health care act and against raising the minimum wage. The stories also include advocates on the other side, one a business group representative accepting the Supreme Court outcome and the other a Democratic senator who sponsored the wage increase bill.

Olivo ceased to be an ordinary small businessperson - at least in terms of public debate.

Then there is Olivo. He makes a short statement in Noguchi's story about health care and a longer statement in Raz's longer story about the minimum wage. Anyone who doesn't think that a substantial number of small business owners—possibly a majority—aren't like him in opposing the health care act or raising the minimum wage hasn't talked to many small business people lately. I just came from spending the weekend with my brother, who with his wife owns two uniform stores in Tallahassee, FL. I got an earful.

Whether these business opponents are right about what is best for the economy or business itself is another question, which I leave to you to decide for yourself.

So, what of how Olivo should be identified? This is a gray area that is a judgment call. Olivo is an active member and a favorite recommendation of the NFIB for interviews, but he is neither an official nor a spokesperson of the organization.

As Kevan Chapman, a real NFIB spokesperson, explained: "Joe is a member of the NFIB Leadership Council in New Jersey, which is a volunteer panel of small business owners who meet regularly to discuss issues affecting their business and report to the state office their concerns. And vice-versa, the state office will brief them on legislative issues. The Leadership Council has absolutely no authority over setting NFIB policy positions, budget, personnel, or any other official activity – it is strictly a voluntary advisory panel operating outside of NFIB's official capacity.

"The NFIB frequently refers members of our organization to media outlets for interviews, but it has always been our policy that they speak for themselves and not the organization. We have many members who are passionate and unafraid of speaking publicly about issues affecting their business, but when we refer one of our members to a journalist it is under the mutual understanding that the views they express are their own."

Accepting Chapman's description—and I have no reason not to—there is usually no reason for NPR or the news media to cite the NFIB relationship in such cases. The person is speaking for himself, even if he is put forward by an interest group as representative of that group's viewpoint.

Olivo, however, is far from usual. He is quoted so often and has had such a public role that he has ceased to be an ordinary small businessperson—at least in terms of public debate. Is that reason enough to give him some sort of identifier, say as a "publicly outspoken small businessman"? "A poster child for the NFIB's point of view." Or in reverse, "an outspoken proponent within the NFIB"? One assumes, after all, that the organization reflects the views of a majority of its members.

Any of these make sense to me. But now we have come a long way from concerns about right wing biases or hidden manipulation by powerful interests or groups.

In addition to being an ombudsman, I also teach at Columbia University Graduate School of Journalism. What we have here is not an ombudsman issue of ethics or standards, but a journalism school issue of good practices and competitive originality. Olivo shouldn't have been interviewed at all.

What we have here is not an ombudsman issue of ethics or standards, but a journalism school issue of good practices and competitive originality.

He is quoted so much as a typical small businessperson that it rightly raises the sorts of suspicions and questions it has about why. Those questions undermine otherwise good reporting. Turning too often to the same source, moreover, makes a story look old and tired, and hardly reflects well on a reporter's initiative.

But before we all turn holier than thou and jump on Noguchi or the producers who set up Raz's interviews, let's remember that their stories were accurate, fair and filled with original reporting. It is standard journalistic practice to go to intermediaries such as advocacy and service groups to find ordinary people to interview. This is an efficient way to find people who are representative of diseases, crimes, skills, ethnicities, particular circumstances, and on and on. Good practice is to vet the people offered, though deadlines often lead to cutting corners.

Noguchi declined to be interviewed on the record for this column and her editor on the story, Les Cook, is on vacation.

Raz, for his part, was upset to learn later that he had interviewed a popular NFIB go-to guy without knowing it. He said that his team spent "days" looking for representative people to interview. The Chicago single mother was unknown in the media and was the ideal representative person to find. Raz thought Olivo was, too. He did the interview roughly two weeks before the Noguchi story aired, and even then missed hers while waiting to air his longer story. "Had we known, we would have searched for another small-business man," he said. "It was a human error. Occasionally that happens."

"We always work to offer up voices we hope our listener will not find elsewhere," he said. See the full copy of his response to me for an illuminating insight into how he and his team work. It is, shall we say, representative of an NPR team.

The shame is that another five minutes invested in a Google search on both stories would have found Olivo's numerous media appearances promoted by the NFIB. It would have saved NPR some embarrassment and might even have prompted the reporters to search harder for new and diverse voices, something Sweeney and senior editors have been promoting. The incident does, however, give me a lesson for my journalism students.