Accessibility links
Election 2: To Kill The 'Man On The Street' : NPR Public Editor Audience surveys find that many of you dislike interviews with ordinary voters (especially if it's with someone you disagree with). I agree that the practice, born out of American populism, is overdone on NPR and in the mainstream media. This is sure to get me in trouble with the American journalism fraternity, but no one else in the world does what we do.

Election 2: To Kill The 'Man On The Street'

Election 2: To Kill The 'Man On The Street' 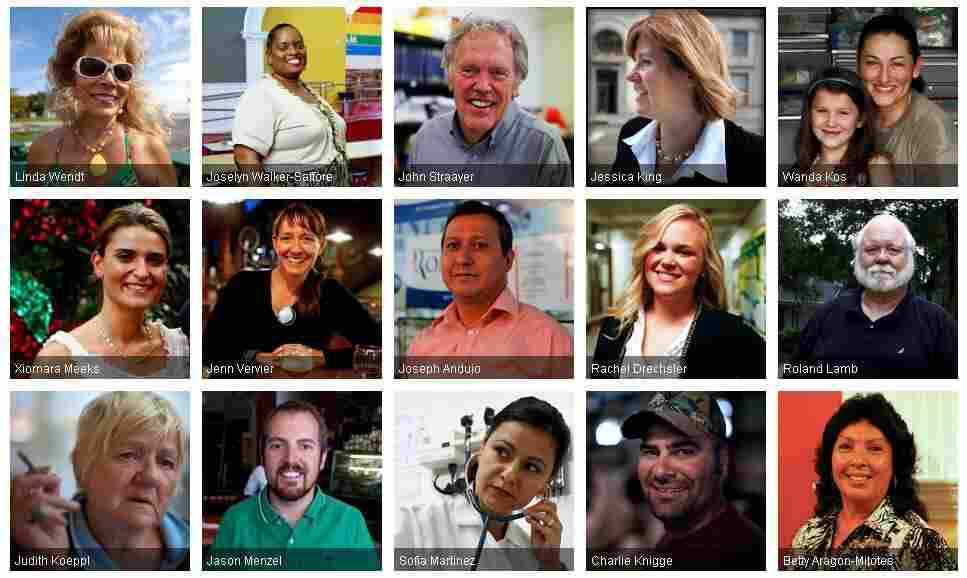 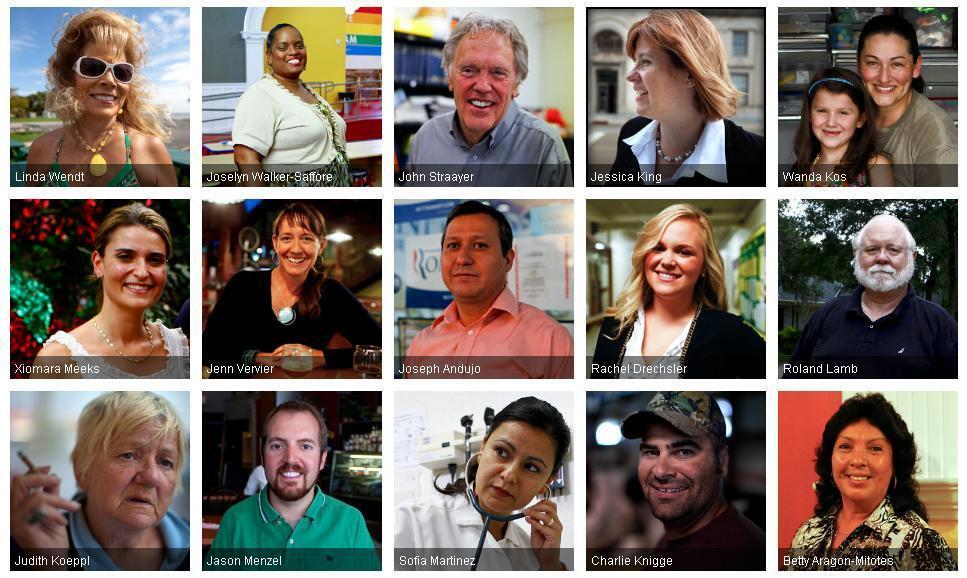 NPR audience researchers asked listeners about the newsroom's election coverage and found general satisfaction, but two criticisms stood out. One, concerning false balance, is common about the news media today. The second, however, strikes at a core practice in American journalism.

Responding to an open question that asked "If you could change one thing," many listeners wrote that NPR should kill interviews with the man on the street.

As one respondent put it, "I really don't care what some random dude in Florida thinks."

Audience analyst Ben Robins didn't quantify how many of the 5,500 respondents made this criticism in various ways, but he said that it was "a running theme in our polls for the last couple of years." This seemed discomfiting to some NPR reporters and editors I spoke to, and surely would be for most American journalists. Unlike those in almost every other country, we pride ourselves in including ordinary people in as many stories as possible.

This practice is taught in journalism schools and hammered by editors as a way to humanize the news and connect with the audience. But if the survey results are representative — you tell me — then something has changed in recent years and the audience isn't connecting back.

Robins wasn't sure why, but he offered thoughts. The many survey answers, pulled together, he said, suggest that listeners and readers feel that interviews with voters, some of them uninformed, take time and space away from more valuable analysis and fact-checking.

This is on a rational level. Any social psychologist will tell you that all of us also operate on an intuitive level that is more powerful and often irrational. As Jonathan Haidt of New York University shows in his book, The Righteous Mind: Why Good People Are Divided by Religion and Politics, we like to have our own opinions reinforced. This demand seems to have become more accentuated by the polarization of recent years.

We want to hear from candidates and experts in news reports. And it might be OK to interview an ordinary voter like ourselves with whom we agree. But it raises our hackles to hear someone no more qualified than us say things with which we disagree. Who is that guy to be on the air?

Supporting this observation is that many of the political bias complaints I receive commonly cite an interview with a man on the street as proof.

"I have a favor to ask, not just of NPR, but of all news organizations," wrote Jesse Austin in Wisconsin Rapids, Wis., of one report. "Can you just interview the candidates and party leaders, fact-check to determine the accuracy of their statements and report back to your listeners/readers/viewers? Nothing is more frustrating for me than hearing/reading/seeing know-nothing voters such as the ones in this report expose their utter ignorance."

This is going to get me in trouble with my fraternity of fellow journalists, but I partly agree. I think that, while there is a place for interviews with ordinary citizens, we journalists have turned the practice into a fetish that has gone overboard.

The doting over the man-on-the-street interview grows out of a historical populist streak in the country and with it, in the profession. American newspapers were the first to appeal to the masses, with the introduction of the penny press in the 1830's. Ever since, the U.S. news media has remained less elite and more local than in most other parts of the world.

Beginning stories with anecdotes, and telling stories as narratives, was introduced in the early 20th century and became most identified with the The New Yorker and, later, The Wall Street Journal, where I was once an editor. NPR later popularized journalistic storytelling in radio, creating its famous "driveway moments," when serious stories are made so compelling on a human level that we find ourselves sitting in our cars listening to them after we have arrived at our destination. Contrast that with the greater dryness of the BBC.

The inclusion of more color and interviews with ordinary citizens also spread into otherwise straight political stories. "I think a general cultural populism plus the featurization trend in the past 40 years or so both are factors," Michael Schudson, an historian and sociologist at the Columbia University Graduate School of Journalism told me.

In the post-Watergate, post-Vietnam era of cynicism, reporters, too, wanted to break free from quoting only officials and executives. I did it as a reporter. I am teaching this year at Columbia and demand that my students do it. NPR editors and reporters — like journalists from The Washington Post to Fox News — do it, too, including in their current campaign coverage.

But foreign reporters have always been mystified by our practice. Gabriel Garcia Marquez, who began his career as a journalist, is head of a center in Cartagena, Colombia, that teaches in-depth narrative journalism to reporters from around Latin America. Neither he nor almost any other leading writer, editor or journalist outside the United States that I can think of pushes to include man on the street quotes in everyday news stories.

When five years ago the Australian Rupert Murdoch bought The Wall Street Journal, one of the first things he did was kill the two long narrative "leders" that ran down each side of the front page. [See editor's note.] American journalism considered them to be exemplary icons. Murdoch and his new editors considered them to be a waste of space. They, like most foreign journalists, will publish the occasional light feature but argue that serious readers mostly want tight, serious analysis—and lots of it.

The NPR poll suggests that they are right. This is not to say that NPR listeners do not want their driveway moments. The magazine format on Morning Edition and All Things Considered has been extraordinarily successful. But as political news has grown considerably on NPR — a function of ceaseless political campaigning, to the chagrin of me and many listeners — the practice of shoehorning quotes from "some random dude in Florida" into an ordinary campaign story begins to be annoying because of what it often is: a limited and uninformed point of view.

The news consumption habits fostered by the internet have further reduced our patience for stories that aren't either to the point or compelling. A continuing loss of public trust in journalism and other institutions, meanwhile, breeds ever-more cynicism about why someone — especially someone with whom we might disagree — is quoted.

Inside NPR, Neal Carruth, the editor who oversees the current election coverage, is sensitive to the criticism. He acknowledged that asking a man on the street to analyze a campaign or a candidate adds little. But he defended the value of asking average Americans to speak to about what they know better than anyone else: their own lives and decisions.

"The objective was not to turn voters into pundits," he said, "but to get into their lives. To try to understand the way people's busy, daily lives intersect with the political process. They have to make big decisions about the future of the country while they try to put food on the table, work two jobs, or find a job."

"That's where the best reporting on voters succeeds," he said.

Some listeners didn't agree. "I am sick of hearing election coverage," wrote Joe Higgins of Burt, N.Y. "While I know this must be done, you do not need to make it worse with spots like your 'First and Main' series. I am not particularly interested in Colorado students' opinions on the candidates. I am interested in analysis of candidates' positions, what is going on in Syria, Libya, and in spots like the one on nano particles."

I agree with Carruth that there is a value in fully developing the thoughts of ordinary voters and placing them in the context of national trends. But pulling that off in a way that is actually interesting and adds value is extraordinarily difficult. Half of the respondents in the NPR survey said that stories "depicting voters' thoughts" are either "not very important" or "not at all important." This question seems to be referring to stories like those in the First and Main series.

Whether you think the series succeeded, then, seems to be a matter of taste. I am lukewarm.

Meanwhile, it is those one-off quotes stuck into political stories that I find most disposable. In an earlier column, correspondent Ari Shapiro made a poetic defense of including them, saying:

No one voice will ever be wholly representative of Americans' views on anything, which is to say that listeners should not hear a particular quote as representing a universal view. But my goal is to paint a complete picture over the course of the campaign using a pointillistic approach, where each voter's voice is a dot of color that, viewed together from a distance, reflects the 2012 electorate in its entirety.

I admire his idealism, but I wonder if many listeners remember or hear the quotes in all the stories enough to be left with a mosaic. I suspect that the conceit is appreciated mostly by other journalists.

It seems to me that Carruth's distinction of not having an uninformed voter analyze a candidate or issue — unless it is a demonstration of a poll or part of an analysis of public opinion — is a sensible starting point to discuss how to put the man-on-the-street genie back in the bottle. I am not sure where the discussion should end, except to say that the practice is way overdone and seems now to be counter-productive with many news consumers.

As the historian Schudson told me: "I don't see that we should (or can) run away from our populism and the virtue it has of seeking to keep journalism inclusive and democratic — but it may be that the random person-on-the-street quote should be retired or at least used sparingly as a format for populism and we should be thinking harder about how to do populism more imaginatively. You can't turn every story into a 10 or 15 minute segment of 'This American Life' but maybe there are some other ways to proceed."

Editor's Note, Nov. 2, 2012: The Wall Street Journal still does narrative journalism, and usually runs one investigative, narrative or special article somewhere on page one called a "leder," as front page editor Rebecca Blumenstein pointed out to me. But this is what many newspapers do and is not the identifiable institution of old, not that this is good or bad. The paper's editor-in-chief, Robert Thomson, is Australian, and its deputy editor Gerard Baker is English.

Jonathan Haidt now teaches at New York University. He was a professor at the University of Virginia when he published "The Righteous Mind" earlier this year.