Accessibility links
Partisan Cliffhanging Over A Supposed Fiscal Cliff : NPR Public Editor Metaphors can be great for framing the urgency of a problem, but what do you do when the image isn't accurate? If you are the president or a Republican Congressional leader, you keep hammering with the metaphor anyway. It's all Ben Bernanke's fault. 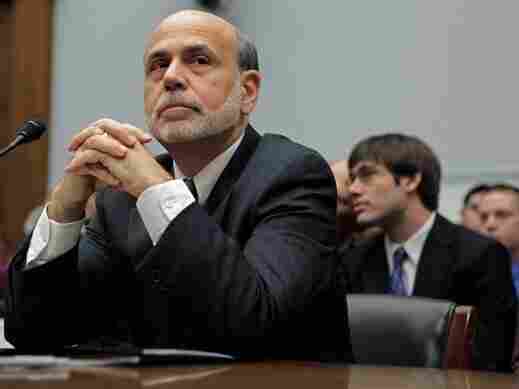 Fiscal cliff? What fiscal cliff? And who is going over it? Republicans or Democrats? Or all of us?

Seldom has a popular metaphor been so overworked and been so wrong, and yet curiously been seen by so many as somehow favoring the other political side.

It's enough to make a dispassionate American want to learn Chinese or German.

There is no fiscal cliff. There also is no partisan advantage in the term. Both President Barack Obama and Republican Congressional leaders use the term to hammer each other, as NPR rightfully reports.

If there is a culprit, it may be Ben Bernanke, the head of the Federal Reserve Bank. Earlier this year, he popularized the term as a way to get political leaders to break their current paralysis and pass fiscal policies to compliment his monetary measures in combating the country's economic ills. Bernanke is known as a good, moderate, academic economist, but he was a bad grammarian in this case. He did, however, succeed in getting the politicians' attention.

The threat of a "cliff" is useful because on a specific date, Jan. 1, 2013, the nation does indeed face the unsettling coincidence of automatic tax rises and budget cuts. The president and Congress agreed to both as a way to force themselves to compromise on fiscal policy and end the inaction that Bernanke and many others have long been criticizing.

How unsettling might this automatic austerity package be? The tax rise is really a return to earlier tax levels: the Bush income tax cuts of a decade ago and a payroll tax holiday from two years ago would expire. The cuts would be in defense and other discretionary budgets. The Congressional Budget Office has predicted that the combination, if allowed to continue all through next year, would force the economy back into recession. The gross domestic product, it said, would likely drop by 0.5 percent and unemployment might rise to 9.1 percent.

Yet, Wall Street seems unfazed by the prospect so far, and many economists are debating how severe the impact might truly be. Whatever the effect, it almost certainly will take time to be felt. Although financial markets might swoon, the nation is unlikely to actually plunge into a kind of abyss on Jan. 2, the first business day of the new year. Some analysts are even saying that no agreement need be reached until late February or early March, when the level of the national debt ceiling is up for renewal. All this suggests that the nation is facing a "fiscal slope" or a "fiscal fast" more than a cliff.

Many listeners have complained about the popular metaphor. "It is not a neutral term; it's a lazy piece of shorthand of no journalistic value," wrote Sean Kiely of Jersey City, NJ. Alexandra Moffat of Oxford, NH, accused NPR of "joining the other dismal media in trying to scare all into cutting Social Security, Medicare, etc. to prevent falling off a cliff."

The newsroom, too, has been uncomfortable as it has found itself going along with the shorthand. Intern Laura Schwartz in my office prepared the following chart to show just how much the metaphor has permeated NPR's airwaves:

Stuart Seidel, who this past week was promoted to the new position of managing editor for standards and practices, sent a memo Nov. 27 to the staff asking for proposed alternatives. "I can't think of a good way to completely avoid using "fiscal cliff," he said, and added:

Making matters more challenging, there's some discussion as to whether we should not say "so-called" before saying "fiscal cliff." The argument in favor of using "so-called" goes along the lines that "so-called" takes some political implication out of the term "fiscal cliff." As with so many things in Washington, what starts out as a potentially politically pejorative term sometimes just becomes the commonly used name or reference for something. Remember "Obamacare"?

The response was quick. Among the proposals listed in a follow-up memo were:

And a more expanded thought from one colleague: "... We should speak plainly, and say what it is: a combination of tax hikes and spending cuts. When others, politicians, use the term, we should try to explain what they are referring to. It's a deadline--we could also just call it that. Fiscal cliff is a judgment call--some people think this would be a good thing to do. We should not buy into the language of interest groups and others we are covering."

The suggestions are all good and already seem to have made their way into NPR stories.

But "fiscal cliff" is unlikely to disappear any time soon, if only because both political parties use it as a threat (though polls show that the Democrats may benefit most if no fiscal agreement is reached by Jan. 1). On a Morning Edition segment, linguist and columnist Ben Zimmer said that "fiscal cliff" may be named 2012's word of the year, much like "bailout" was in 2008.

As Zimmer noted, the metaphor, moreover, has some surprisingly strong roots, with evolving meanings.

Annalyn Kurtz of CNN Economy found a 1957 article in The New York Times warning home buyers to beware of over-extending their personal finances and going over a "fiscal cliff." Future property tax was the most difficult expense to predict, the article said.

Katherine Connor Martin of OxfordWords found another use 30 years later in The Boston Globe. This time the term referred to the economic state of a company facing bankruptcy. Wrote the Globe: "Public Service Co. of New Hampshire, majority owner of the Seabrook nuclear power plant, inched closer to the edge of a fiscal cliff by defaulting on $37 million in debt interest payments."

Sometime in the two decades that followed, "fiscal cliff" lodged itself in the lexicon of Capitol Hill. The term was usually used to inspire fear about the policies of the opposing party.

CNN's Kurtz, for example, cited a 2008 statement in which Republican Sen. Jim DeMint of South Carolina warned: "We are now trillions of dollars in debt and Obama's massive new spending program threatens to send our nation over a fiscal cliff, leading to higher taxes and fewer jobs."

Bernanke doesn't seem to have been the first to apply the term to the current deadline. CNN found several earlier references by Reuters to a "year-end fiscal cliff." But Bernanke gave the phrase authority. He also added some extra hyperbole, calling it a "massive fiscal cliff" in testimony to the House Financial Services Committee on Feb. 29.

And so he has helped create at least a political cliffhanger. Perhaps the bigger drama is to see which party ends up being first thrown over the edge — and whether the rest of us really go over that cliff as well.

Readers are invited to recommend their own terminology.