Accessibility links
Allowing Hagel To Be Called 'Anti-Semitic' On NPR : NPR Public Editor Should NPR air inflammatory name-calling such as "racist," "homophobic" or "anti-Semitic" of a public figure when the proof is thin? A case involving Elliott Abrams and President Obama's nominee for secretary of defense, Chuck Hagel, raises questions about journalistic fairness, audience intelligence and American character.

Allowing Hagel To Be Called 'Anti-Semitic' On NPR

Allowing Hagel To Be Called 'Anti-Semitic' On NPR 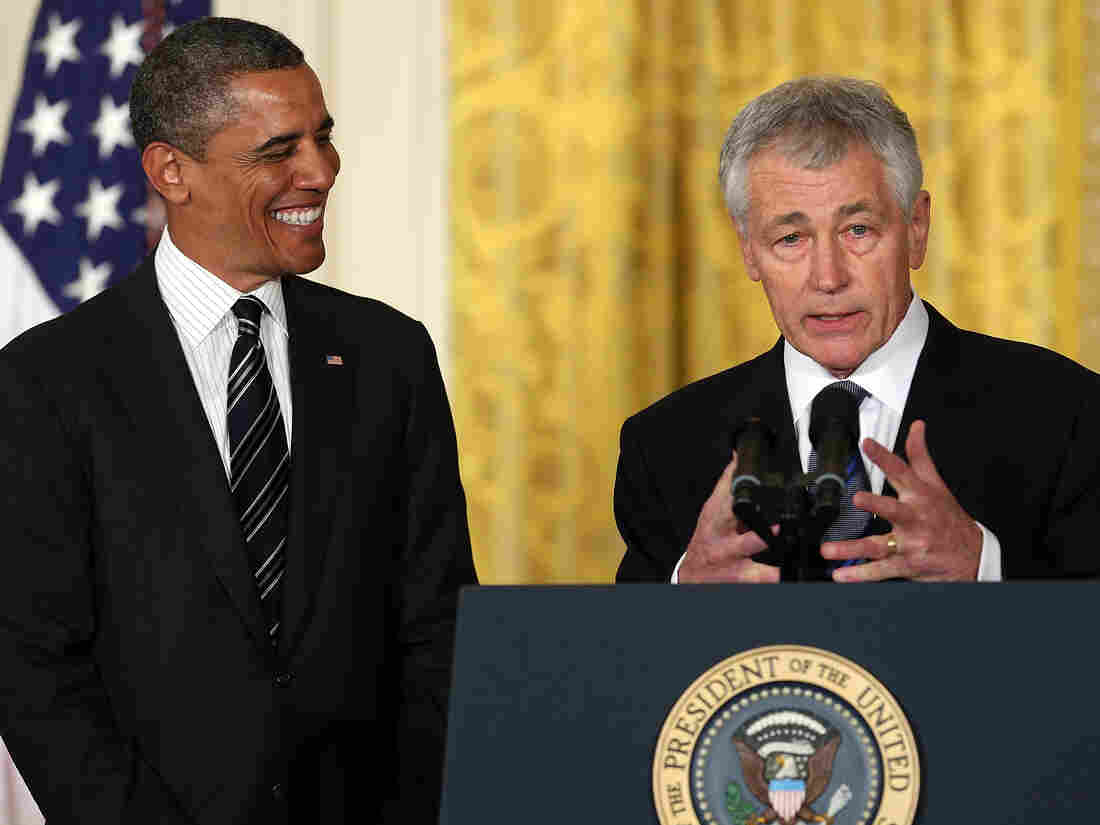 Former Sen. Chuck Hagel speaks after President Barack Obama nominated him for secretary of defense during an event at the White House on Jan. 7, 2013. Mark Wilson/Getty Images hide caption 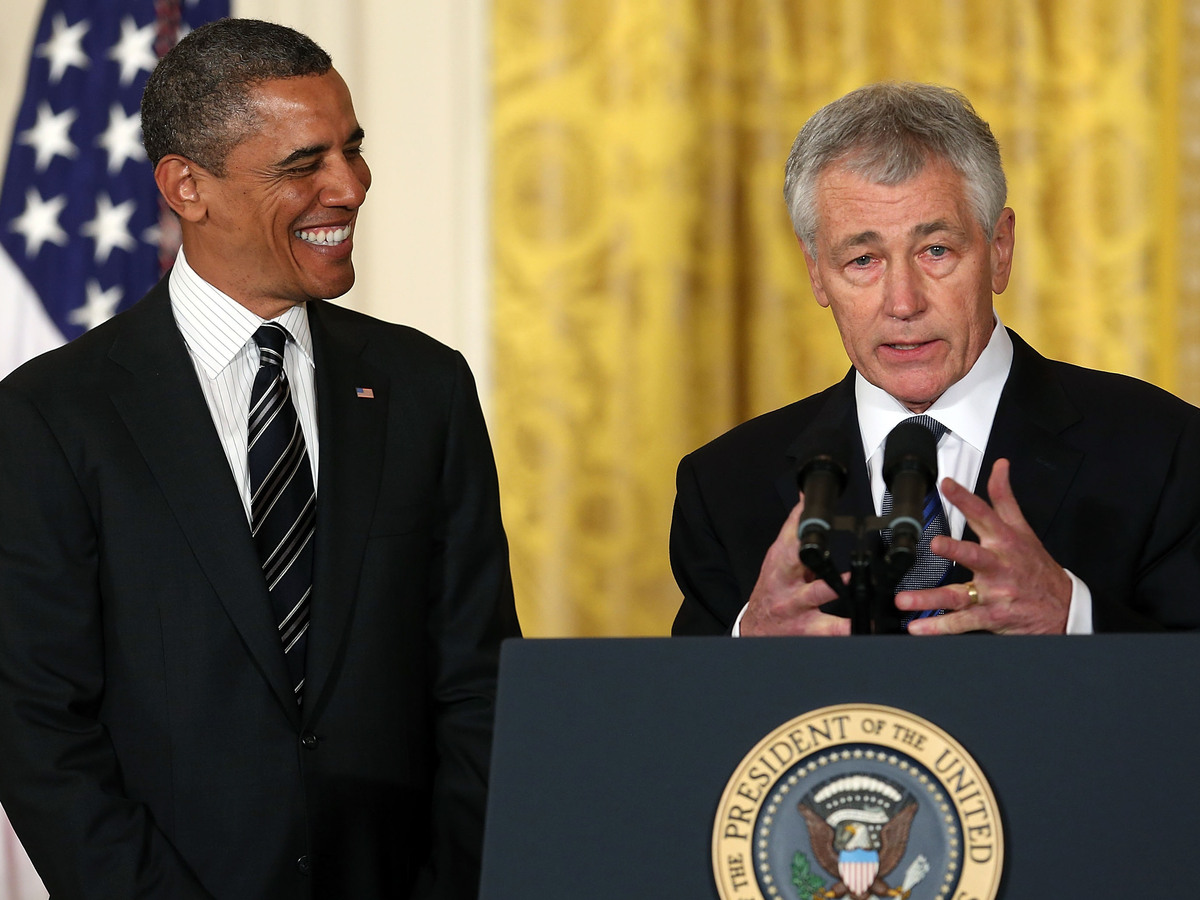 Former Sen. Chuck Hagel speaks after President Barack Obama nominated him for secretary of defense during an event at the White House on Jan. 7, 2013.

When Elliott Abrams, a foreign policy official in the Ronald Reagan and George W. Bush administrations, called former Sen. Chuck Hagel "anti-Semitic" on All Things Considered, many listeners were enraged.

"How dare you NPR - how dare you allow discredited neocon hack Elliott Abrams to smear and mislead about Chuck Hagel on my Public Air Waves," wrote Larry James of Fairfax Station, Va. "Questioning Israel's actions from time to time is not anti-Semitism."

Donn Viviani, of Honolulu, referring to Abrams conviction for lying to Congress about the Iran Contra affair, said, "I can't believe you let a guy who secretly sold weapons to our enemies smear with hearsay and innuendo a guy who earned two purple hearts serving this country."

"I hope you are going to have someone on the program to refute Abrams position on the Hagel nomination," said Chris Carlson of Portland, Ore., referring to Hagel's nomination by candidacy for secretary of defense. "The charge that Hagel is an anti-Semite is a serious charge. Abrams was an architect of the Iraq War, which Hagel opposed."

I understand the complaints and was myself troubled that Abrams, who is currently a senior fellow at the Council on Foreign Relations, was allowed to use NPR to make an inflammatory allegation for which he offered precious little proof. NPR wouldn't allow someone to make an unproven accusation that another person is a thief, for example, or beats his wife.

Is it different to accuse someone of being anti-Semitic, or racist, or homophobic, or any of a number of other inflammatory terms that are an unfair smear if unproven?

Abrams spoke in a "two-way" interview with host Melissa Block that lasted eight minutes. These conversations give listeners the opportunity to hear directly from people involved in the news or experts with viewpoints, including some listeners might not like. This was not a reported piece, in which the reporter has greater control — and responsibility — to find truth and impose fairness over the quotes she or he decides to include.

Yet, even in a reported piece on Morning Edition this past week, a voter who opposes President Barack Obama repeated the canard that the president is not American-born, with no context added by the reporter. This raised a separate wave of complaints from listeners.

What's happening? Are some of these charges political fair game when it comes to public figures?

One valid reason to air such charges is the news value in reporting what a significant group or public figure believes. But then you should deal with the charge directly and analyze it, which can be done more easily in a reported piece. Block did heroic work in trying to question Abrams' claim about Hagel's alleged anti-Semitism, and she offered a quote from a book by Hagel that would seem to refute the allegation. But she is constrained in her role from openly disagreeing with a guest.

The show could have chosen to edit out that section of the interview, which was pre-recorded. It also could have killed the interview altogether. Or producers could have told Abrams that it would not air the charge without better proof and ask him to re-record his answer. Abrams could then speak of his own discomfort about Hagel's position on Israel and about his past use of the phrases "the Jewish lobby" and "the Jews." It is these phrases, plus some unsubstantiated hearsay, that was the proof Abrams had to offer for Hagel's supposed anti-Semitism.

It is unclear how often Hagel actually said these phrases, and their use does not automatically mean someone is anti-Semitic. History has given Jews and anyone who is conscientious reason to be nervous when Jews are singled out as a group in a negative way. But that Hagel might be anti-Semitic has been roundly rejected by many Jews and non-Jews who know Hagel well, and nothing in his record has come to light to support the charge.

All this is part of the case against NPR's giving air time to Abrams to make it.

And yet there is another argument that justifies NPR's action, and it comes down to this: Trust the audience.

Christopher Turpin, the executive producer of All Things Considered, cogently made this case in an email exchange with me. In doing so, he also showed the care and anguish that goes into "two-ways."

As you have doubtless heard before, these kind of interviews are always tough. As hosts, producers and editors, we're invariably left second guessing ourselves. Believe me, there are always questions you wish you had framed a little differently, facts you would have liked to have found a way to work in, edits you wish you had (or hadn't) made. That said, I feel we were on pretty solid ground here.

As to the specific questions you raise:

--No, I don't think we should have killed the interview. While we don't want to provide a platform for ad hominem attacks — and we need to be sensitive to the ways both left and right can use accusations of hate to undermine perfectly legitimate policy perspectives — I disagree with the notion that allegations of anti-Semitism or racism constitute hate speech. Take that argument to its logical extreme and you end up in a pretty odd place. As with so much of what we do, these are judgment calls. In this case, Abrams' allegations reference specific events, which were accurately contextualized by Melissa, who challenges him appropriately throughout the interview.

Turpin didn't think that the interview should have been stopped and re-recorded, either.

We didn't consider re-recording the question. We do that when there is an error of fact. To Abrams the facts here are perfectly clear, based on Hagel's comments over the years. He is not plucking his allegations from thin air. The question is whether those facts, as he sees them, constitute anti-Semitism? Is it our role to decide where that highly subjective bar is? Not in my view. Ultimately, I'd rather place my faith in our listeners to weigh the allegations in context and decide on their merits.

But the All Things Considered staffers were aware of the weight of the decision that they were making. They wrapped up talking with him at about 3:30 p.m. and had less than an hour to edit the tape before airing it, Turpin said. That is not much time to think through subtle trade-offs. They thought fast, as Turpin explains:

--Cutting the section where Abrams makes his accusation. If you listen to the interview this is a discrete section at the end of the conversation, and could have been lifted out. In my view, to cut this and run the rest of the interview would have been intellectually disingenuous.

--Extend the interview a tad to keep the anti-Semitism section, as well as much of the wider context as possible. This is what we did.

I should also note that we immediately transcribed Abrams comments and sent them to the White House for comment. Our editorial assistant followed-up by phone. We didn't get a response.

In the end, I accept — reluctantly — that the decision Turpin, Block and their team made was defensible. Two things sway me.

One is that you, members of the NPR audience, are smart and by hearing the Abrams charge and reasoning, you yourself can hear the thinness of his evidence, which came across pretty clearly. This is apparently what is happening across Washington and the country as the charge appears to be fading away.

The same goes for the so-called "birther" statement about Obama. The story was about Republicans who, on Inauguration Day, still deeply disliked the president. The quote showed that some of them even still believe he isn't American, a belief so discredited that it arguably doesn't merit context anymore. I doubt that few if any members of the NPR audience were influenced by the statement or needed it to be challenged.

A second observation that sways me has to do with American character and constitutional history. Few countries match the United States in free press and free speech. Protected by the First Amendment, Americans have flung accusations against public figures with an ease that astounds citizens of most other countries, even those with mature democracies such as Britain and France. I share the fear — or the civility — of those listeners who feel that giving a megaphone for unproven, inflammatory smears unnecessarily divides and perhaps even undermines us as a nation, not to mention the damage it does to the individual such as Hagel.

But the country has prospered with the rough and tumble system we have. Will it always? I don't know. Other countries have strong democracies and more regulated speech. As one media lawyer told me last week, falsely accusing someone of being anti-Semitic might even be criminal in Germany, where it is illegal to deny the Holocaust. We shouldn't be so arrogant as to think our way is the only true democratic way. But it has worked so far for us.

Still, I personally would have cut or re-recorded the offending parts of the Abrams interview, for reasons of simple fairness and civility.

For reported pieces, meanwhile, it seems to me that a sensible rule would be to avoid inflammatory names such as "homophobic" and "anti-Semitic" and say instead what a person has actually said or done. The Associated Press recently moved in this direction.

I welcome a genuine discussion among us on the matter.

As it was, Turpin did have a separate regret:

--I felt we fell down, and the lapse is strictly mine, by not having a strong supporter of Senator Hagel on the show the following day to respond to Abrams. While Senator Hagel's qualifications have been well documented on our air, this was a moment where his supporters deserved the opportunity to state the Senator's case in the same relatively extended format we gave to Abrams.

It probably is not necessary by now. But a great thing about the news business is that tomorrow is a new day, and you can always go back and do it all over again.