Accessibility links
Just Tell Me When It's Over: Play-By-Play Coverage In Selecting The New Pope : NPR Public Editor Many listeners complain that for the last month NPR has been "all Catholic radio, all the time." Our review finds that the story count has indeed been overwhelming. But in a comparison among religions and denominations, Catholicism is unique in size, institutional organization and global influence. Now that we have Pope Francis, however, a news break might be nice.

Just Tell Me When It's Over: Play-By-Play Coverage In Selecting The New Pope

Just Tell Me When It's Over: Play-By-Play Coverage In Selecting The New Pope 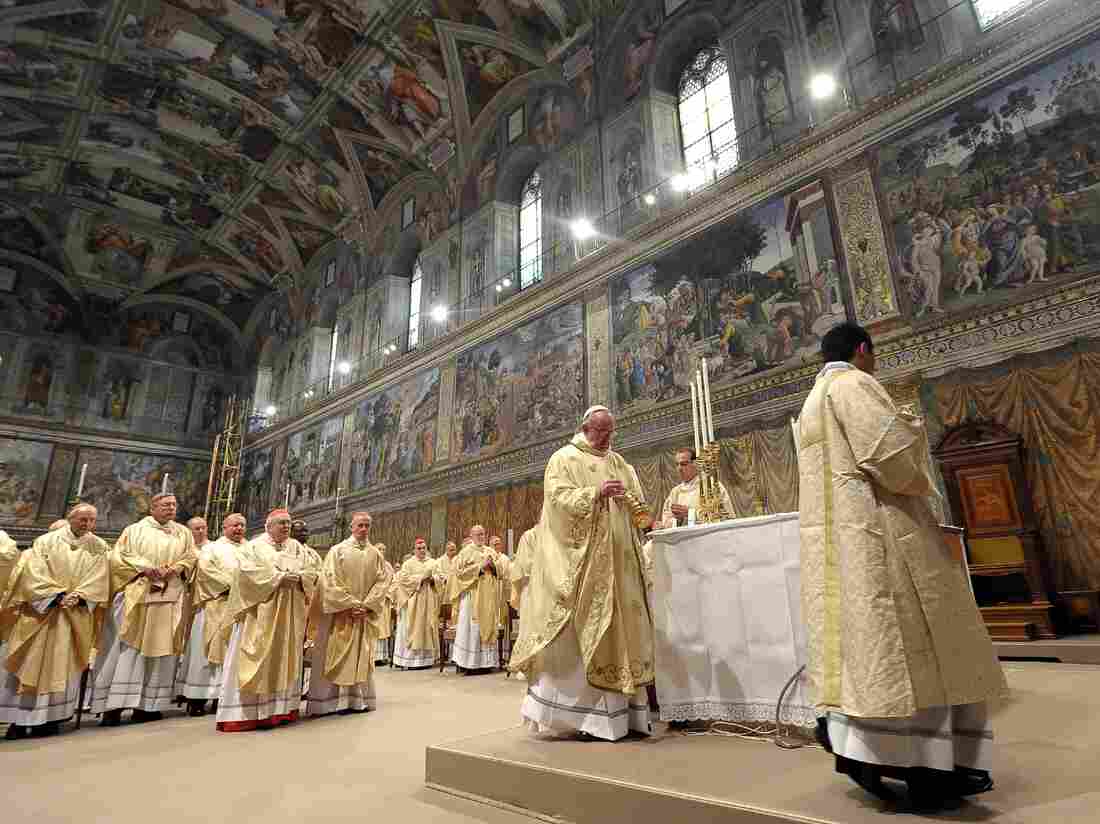 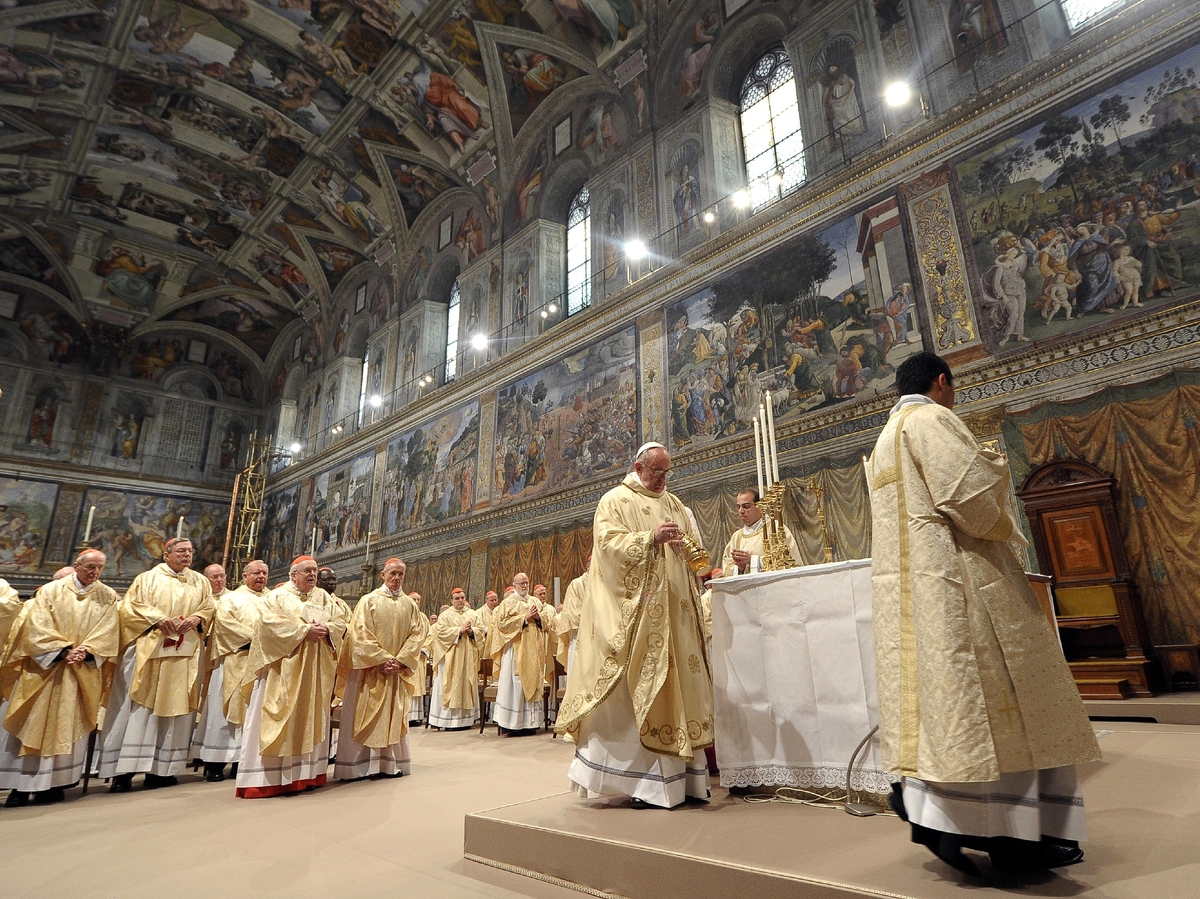 Jorge Mario Bergoglio attends his first Mass with cardinals as Pope Francis in the Sistine Chapel on March 14, 2013 in Vatican City.

After the last month, many of us understandably are pope-ed out.

"It feels like NPR now stands for National Papal Radio. I am exhausted by the coverage of the pope," wrote Sean O'Brien of Charlottesville, Va., one of the more than 200 people who sent messages of complaint.

"I have found myself turning off the radio rather than listen to yet another story about the selection of the next pope, what they wear, who makes their clothes, what the last Pope thought, why he resigned, yada, yada, yada," Paula Szabo from Ormond Beach, Fl., wrote.

Has NPR been "all Catholic radio, all the time"?

NPR aired 69 stories since Pope Benedict XVI announced his resignation Feb. 11 and Pope Francis was selected as his successor Wednesday. That averages out to about two radio magazine or call-in segments per day, not including the steady drumbeat of shorter items delivered by hourly newscasts that are not transcribed.

Most of the complaints have concerned the 47 stories that aired in the four weeks between the day after Benedict announced his resignation and the morning before Francis was announced — a period during which there was less major news about the subject and more "horse-race" speculation about who might be selected. Here are a few of the headlines from the Web versions of those NPR stories:

A Rough Guide To The Papal Conclave
Pope Benedict XVI Will Have To Give Up Red Shoes, Shoulder Cape
The Americans Who Might Be Pope
No Clear Frontrunner For Next Pope On The Eve Of Cardinals' Conclave
Anxiety Befalls Vatican As Cardinals Gather
Pope Apps And Websites Help You Stay Up To Speed On Papal Selection

There were few criticisms of any one story. More typical was the view of Carmen Reid from Santa Barbara, Calif., who wrote: "Just let me know when and if they decide, that is enough."

The amount of NPR's coverage of the Roman Catholic Church has been a long-running source of grumbling — almost all of it maintaining that there is too much. I have looked at this issue before. In a study that I did with NPR's library, however, I found that the perception among many of us was wrong. In 2011, for example, stories mentioning Catholicism came in fourth, among religions or denominations.

The number of stories, in other words, seemed at least partly to reflect genuine news. The troubles in the Muslim world put Islam way ahead as number one. That said, the number of Catholic stories over the last month is almost double the 39 that ran in all of 2011.

I asked Stu Seidel, managing editor of standards and practices, to explain why NPR has been covering the pope selection process so closely. He explained:

The Roman Catholic Church has more than one billion followers around the world, with more than 50 million of them living in the United States. The teachings and policies of the church are woven into the fabric of nearly every society on earth. Those teachings and policies have profound influence on American politics and society. Comprehensive reporting on the leadership and future of the Roman Catholic Church is integral to understanding the world around us. To give short-shrift to the selection of a new Pope would be to ignore the church's role, a role that reaches far beyond just the millions and millions of Catholics in our society and around the world.

I agree with the editors, as much as I was personally tired of so many stories, too. Note: I am nominally a Catholic — and sometimes not even that — though I devour stories on doctrine across all religions.

To expand on Seidel's comment, Catholicism is the largest single denomination in the country. An extensive study conducted by the Pew Forum on Religion and Public Life in 2007 found that 24 percent of American adults self-identify as Catholic. A Nielsen study in 2011 concluded that nearly 19 percent of the visitors to the NPR website said that they were Catholic. NPR's story selection should not rigidly reflect the breakdown of its audience and the nation, but as a public medium and a service, it should be influenced by both.

Catholics make up half of the 2.2 billion Christians worldwide.

Some listeners also asked if NPR would cover the transition of other religious leaders as closely as it has covered the pope. This is a logical question. We all know that neither NPR nor the mainstream media in general has done so in the past. I don't think that they will or should do so in the future.

It's not that other religions are not of equal or greater importance. Among Christians, there are more Protestants than Catholics in the United States. In a 2010 Pew study, Catholics made up half of the 2.2 billion Christians worldwide. There were more Muslims — 1.6 billion — and almost as many Hindus — 1 billion. (Among world religions, Buddhists came in fourth, with 488 million followers.)

Catholic charities, for example, are active in almost every country in the world, and many national councils of bishops are potent political and social forces. In meeting with Muslim and Jewish leaders from conflicted countries, meanwhile, the pope virtually takes on a role of speaking for Christianity and Western culture.

Still, once we get past the requisite follow-up stories on the new Pope Francis, I hope that we might get a break in papal stories for a while.