Accessibility links
The Honorable 'Girlie' Senator From The State Of New York : NPR Public Editor Reporter Ailsa Chang was accused of sexism when she described Sen. Kirsten Gillibrand as "perky" and speaking in a "girlie" voice. But what if the senator's supporters say the same, while admiring her forceful will in confronting the Pentagon? Are we undercutting women political leaders, or treating them differently from men? Is this a "Legally Blonde" moment?

The Honorable 'Girlie' Senator From The State Of New York

The Honorable 'Girlie' Senator From The State Of New York 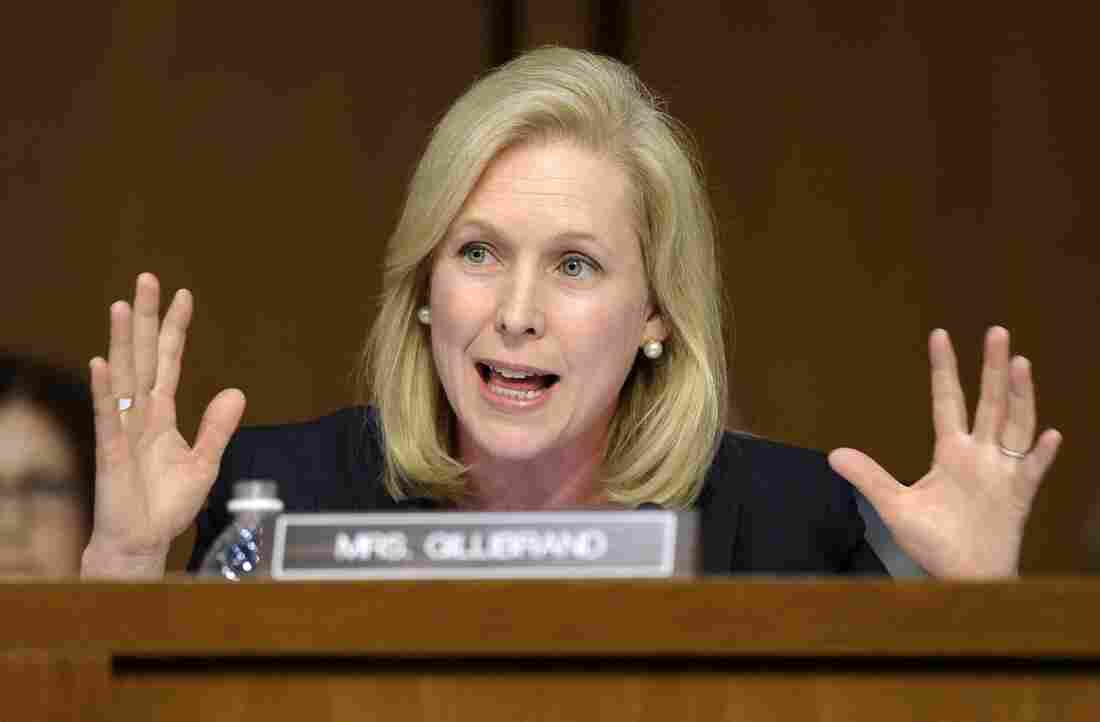 Sen. Kirsten Gillibrand asks a question of a witness on Tuesday, June 4 during a hearing on pending legislation regarding sexual assaults in the military. Susan Walsh/AP hide caption 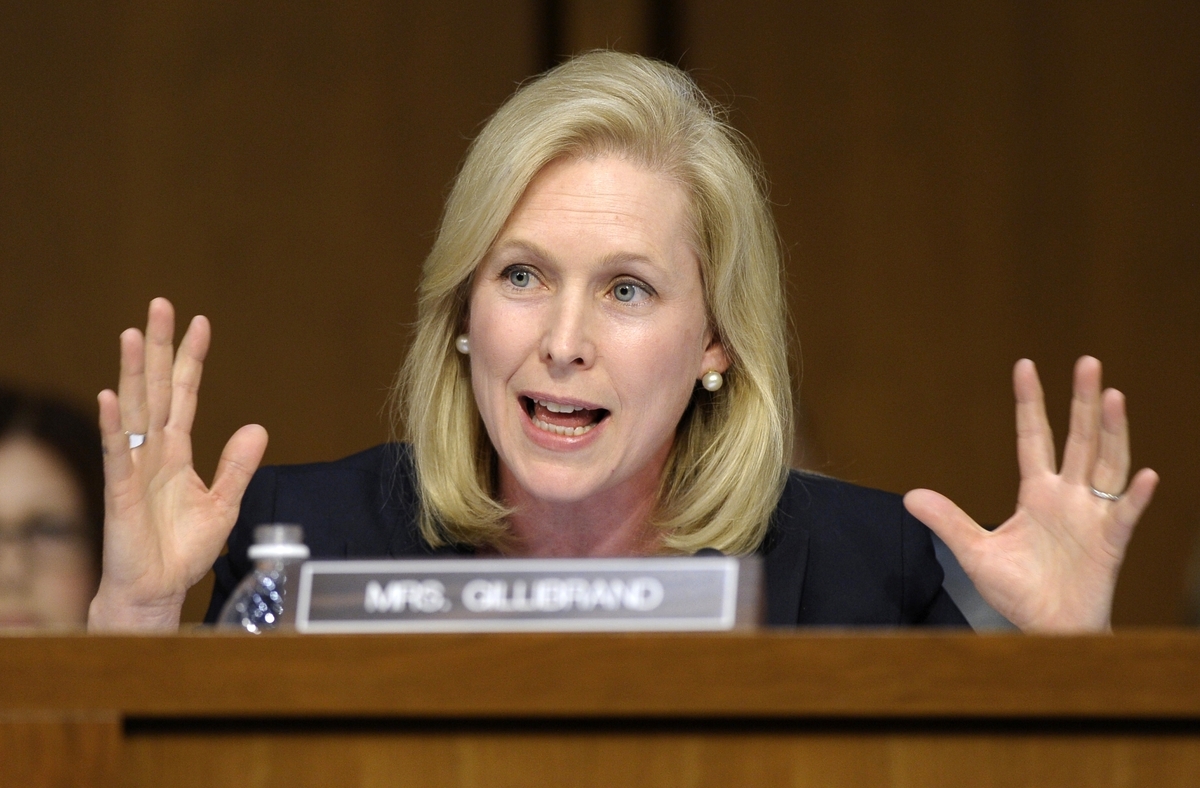 Sen. Kirsten Gillibrand asks a question of a witness on Tuesday, June 4 during a hearing on pending legislation regarding sexual assaults in the military.

How do you describe a woman who is short, feminine and has a soft voice? Do you describe any woman you meet in the same way as, say, you would a United States senator?

This was the dilemma faced by another woman who, until joining NPR in February, was an accomplished police and terrorism reporter working the mean streets of New York. Ailsa Chang was so good at WNYC that I invited her to speak to my class at Columbia Journalism School last year.

But she has since moved to NPR and the perhaps more treacherous byways of Washington. There, she found herself interviewing New York Sen. Kirsten Gillibrand and others about the senator's leadership role in pressuring the hardened commanders of the military over the unseemly matter of sexual assault and rape in the ranks.

'How are her baking skills? Does she make the best pot roast?'

"The vast majority of people I spoke to brought up her looks and femininity without my prompting them on the subject," Chang wrote to me. "Even her college squash coach at Dartmouth.

"Then I raised the issue with Gillibrand herself. I informed her that the following words kept coming up during my interviews with people who knew her: 'attractive,' 'hot,' 'telegenic,' and 'pretty.' I asked her, does it bother her that people can't seem to talk about her without commenting on her physical appearance?

"Gillibrand said she did not take offense. She laughed and said she was at least thankful the comments veered towards how attractive she was, rather than the opposite."

And so Chang wrote her radio script and an accompanying Web version for two stories. One, for All Things Considered, was about a demand that the military use its prosecutors, rather than unit commanders, in investigating sexual assaults. The second was a profile of Gillibrand.

In the latter piece, Chang reported on the senator's hard work, political acumen and focus on women's issues. In Gillibrand's confrontation with the military brass, the irony of the first physical and speech impressions left by the senator seemed to Chang too obvious and too interesting on a human level to ignore.

Chang and the editors and producers at Morning Edition came up at the last minute with this diplomatic formula, opening Chang's presentation:

Kirsten Gillibrand has a soft voice that takes on a certain earnestness when she gets angry. Two months ago, she ripped into military officials for letting commanders decide which sexual assaults to bring to trial.

The first Web version to appear online, however, was more like what many of us — male and female — might say to our friends after first meeting Gillibrand. The senator was described in the report as "petite, blonde and perky," and said to speak in a "soft, girlie voice."

Senate Majority Leader Harry Reid once called her the "hottest member" of the U.S. Senate. But friends say the woman has scary grit — precisely the kind of person who can go head-to-head with the military about how it's handling sexual assault.

We can all guess what the first public reactions were. Here are some tweets I received:

Tim Looney ‏@slowdumbshowman 16 May
@sarahljaffe @SenGillibrand @SchumacherMatos "petite, blond and perky"? How are her baking skills? Does she make the best pot roast?

The Web version was quickly changed to read like the radio transcript. Some listeners then complained that the change was not accompanied by an editor's note. But then, there was no factual error being corrected. So, let's set aside that debate and focus on the sexism charges.

Chang told me that she contacted Gillibrand's office after the story ran and the senator's staff said that she laughed off the first Web version. As Chang had written to me about her earlier interview with the senator:

She also noted that such fixation on appearance is human nature, especially when the subject is a female politician, and she's come to accept that reality. She mentioned she's as guilty as anyone else. For example, Gillibrand said, she'll notice right away if one of her female Senate colleagues changes her hairdo.

But she said sometimes the focus on looks can go too far. It saddened her when someone as accomplished as Hillary Clinton was the target of critical remarks about her appearance.

Aside from Reid's comment about the New Yorker being the "hottest member" of the Senate, should NPR have repeated it, for example? The comment stayed in both versions of Chang's report.

President Barack Obama recently sparked a similar issue when he said at a fundraiser for Kamala Harris, the attorney general of California: "She's brilliant and she's dedicated. She's tough. She also happens to be, by far, the best-looking attorney general in the country."

Criticism receded after it was clear that Obama was speaking affectionately of a close friend. Note, too, that I purposefully extracted the full quotes by both Obama and Chang that put looks in the context of describing a political leader who is strong. "Scary grit" said Chang of Gillibrand. "Brilliant... dedicated.... tough" said Obama of Harris.

But does that context make a difference? Does it round out the picture of the women, or is it insulting, as if pretty women can't also be formidable?

The comments may also have career consequences. As Elizabeth Corson from Baltimore, Md., wrote to me, "Only a month ago, you ran story about how commenting on women's physical appearance hurts them politically."

Corson was referring to a piece by Eyder Peralta on The Two-Way blog about two studies commissioned by "Name It. Change It," a joint project of three advocacy groups supporting women in politics. The project focuses exclusively on sexist news coverage. "Any mention — positive or negative — of a woman's looks, hurts her chances with voters," reported Peralta on the studies.

'Our New Neighbor Is Hot' : Washingtonian cover about shirtless Obama.

As Celinda Lake, one of the researchers, wrote: "Even what we thought was benign coverage about how a woman dresses has a negative impact on her vote and whether voters perceive her as in touch, likeable, confident, effective, and qualified. And, in close races, sexist coverage on top of the attacks that every candidate faces can make the difference between winning and losing."

I haven't read the studies to judge their validity, but accepting that they are correct, what, then, are we to make of what seems to be growing comments about the appearance of men?

Obama himself has drawn press observations on his looks. After he was photographed shirtless in Hawaii while still president-elect, Washingtonian magazine ran a headline on its cover: "Our New Neighbor Is Hot."

Or how about the way political cartoonists seize on a male politician's physical features, such as the large ears of President George W. Bush, or further back, Jimmy Carter's toothy grin or Ronald Reagan's permanently black hair? And now they play with Obama's ears, too. Along those lines, is it a form of reverse sexism that male public figures — more than females — seem to draw press comments on being overweight, or sloppy? See, for example, just about any story about the political ambitions of New Jersey's governor, Chris Christie.

And while they aren't talking about politicians or business leaders, read the movie reviews in almost any respectable publication today: the physical looks of the actors seem ever more to be getting the same treatment as that of the actresses.

Or there was, for example, the author of The Wise Latina Club and NPR guest host Viviana Hurtado who wrote in a newsletter blast about MSNBC's Thomas Roberts. After appearing on his show, Hurtado described Roberts as a "smart hunk."

Her comment reflects the flippancy in the freewheeling Internet culture among young men and young women in talking about appearance. The prevalence of such comments may change their impact and make any rules in the mainstream news media seem, well, quaint.

I am not sure what the answers to all these questions are, except to say there is no one clear answer.

Even so, in describing appearance, NPR and the news media surely should be respectful toward politicians and others of both sexes whose success, profession or manners don't trade on their appearance. Clearly, women are still more subject than men to being objectified as sex objects and to being patronized and abused, and so special sensitivity is required.

But to outlaw all physical descriptions is to ignore reality. It creates a spooky non-reality. It also drowns us in an earnestness that robs us of the art of nature, of words and of life. In listening to or reading a news story, we all deserve to be given a sense of person and of place so that we can have a fuller picture in our imagination.

There is a constant fight in journalism to cut adjectives, or limit them to objective ones that we all understand: the senator is short or her voice is soft. What does it mean, after all, to be "perky" or "girlie?" Or "feminine," as I wrote in my lead? It's valid to criticize such subjective descriptions, but I still wouldn't make a hard rule against them. Sometimes subjective adjectives add color, depth and voice, and by the end of a story we should understand what the reporter meant in using them.

I played above with adjectives in trying to give you some sense about Chang herself. Hardly any streets in New York are actually "mean," but, tongue-in-cheek, I pulled on a stock phrase to try to communicate that Chang isn't an inexperienced, lightweight reporter. Let me add here that she is also sensitive to women's concerns. If I might speak out of school, she spoke frankly to the women in my class about the advantages and disadvantages of being a woman covering cops, and how to comport yourself.

Many of you may have better ideas about what the rules should be in describing women leaders. I am open to your suggestions.