Accessibility links
On The Uncomfortable Matter Of Beheadings And Executions : NPR Public Editor Where to draw the line on language that reflects reality but provokes repulsion?

On The Uncomfortable Matter Of Beheadings And Executions

On The Uncomfortable Matter Of Beheadings And Executions 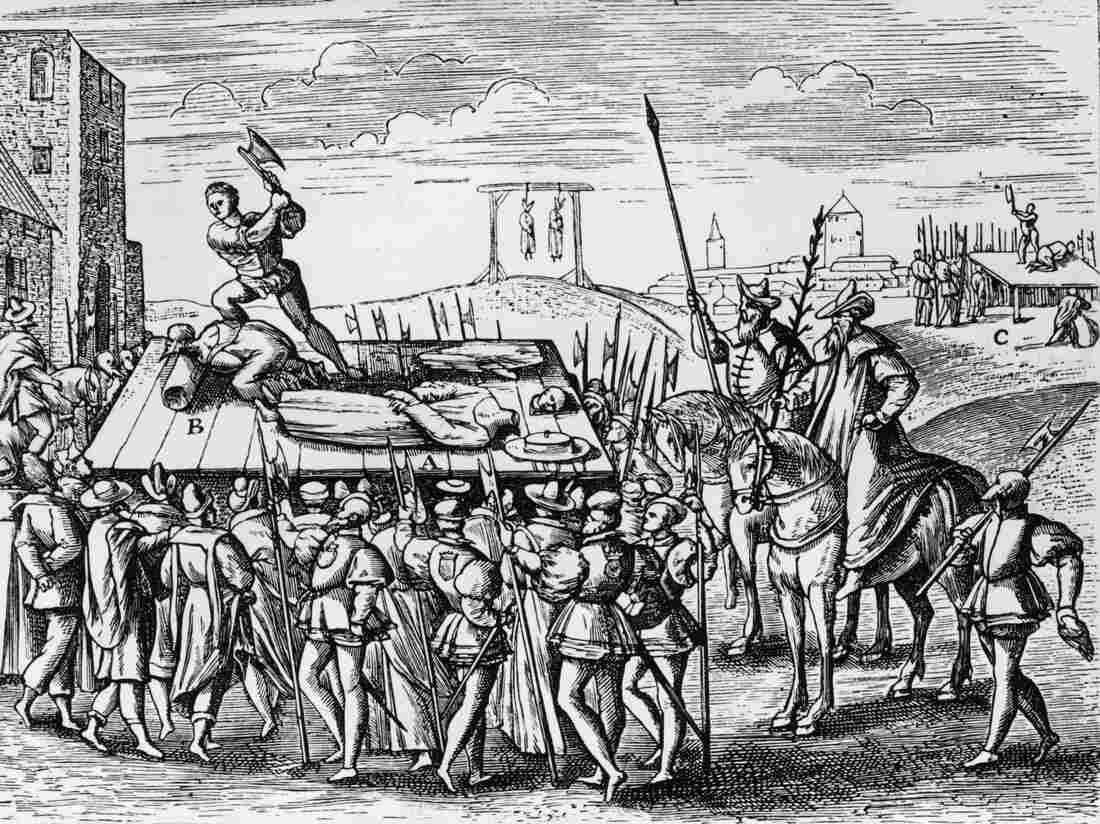 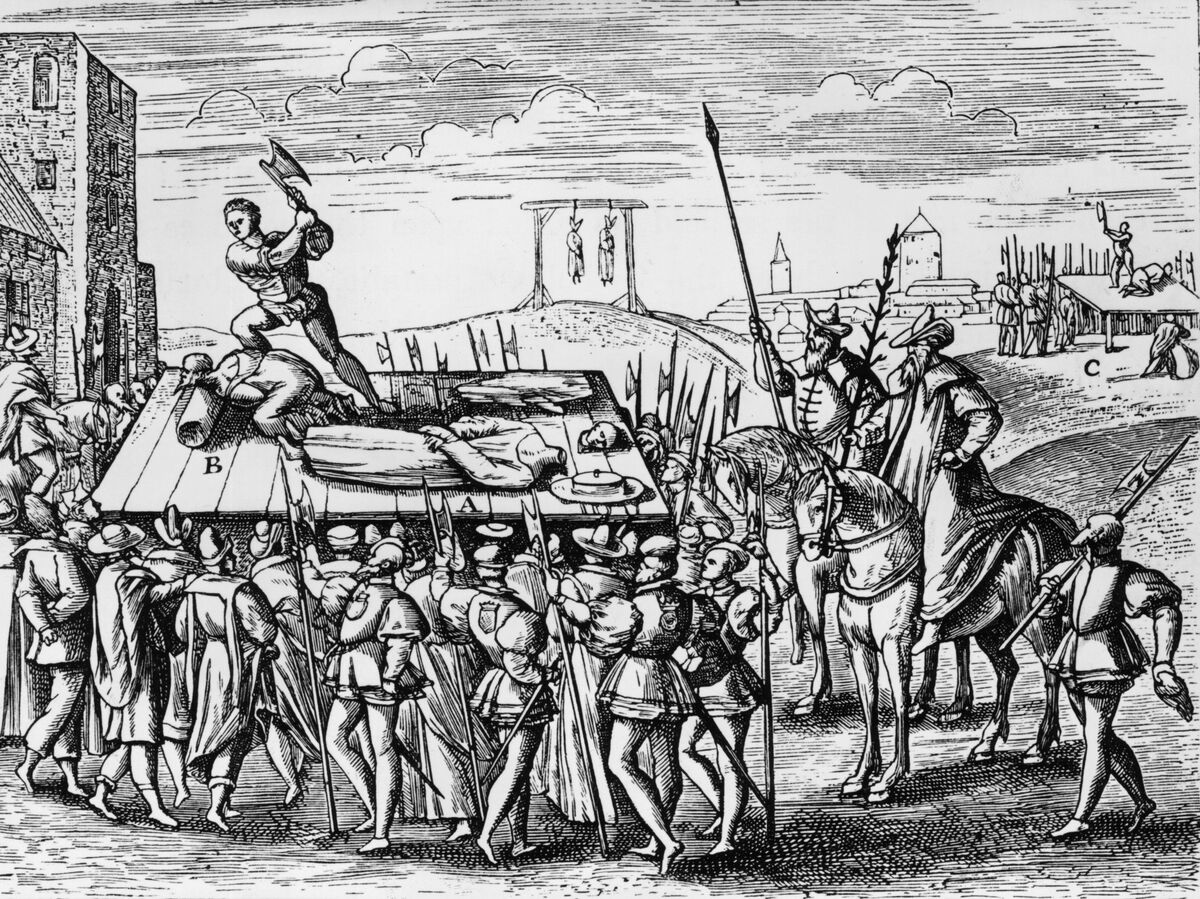 This 1587 facsimile of a copperplate engraving shows three beheadings as capital punishments decreed by King Henry VIII against Thomas More and two other Roman Catholics in 1535.

Differences in recent weeks over whether to post videos or photographs of the grisly beheadings by ISIS seem to have come down pretty strongly on the side against the postings. But what about the use of the word "beheading" itself in radio stories? Should there be an advance warning for listeners?

And in a related matter, does it confer too much legal dignity on ISIS to say that the victims were "executed," as if by a legitimate state?

"I beg you to stop using the word 'beheading,'" wrote Bonnie Friedman of Maui, Hawaii. "It is inconceivable to me what hearing that word so many times a day must do to the family and friends of the victims and, frankly, to all civilized humans. I know what it does to me."

A dozen other listeners agreed, and many disliked use of the word "executed," too. Jo Hackl of Greenville, S.C., for example, added a juridical dimension:

As a lawyer and writer, I am keenly aware of the power of language, as I know you are. One thing that has troubled me in the media coverage of the murder of the US journalist James Foley by ISIS is the use of the words "beheading" and "execution" to refer to the act. It appears that ISIS chose this horrifying method of murder, and chose to publicize it, in order to inspire terror. By repeatedly echoing the words that ISIS has used, I believe that NPR is playing into the climate of fear that ISIS is trying to create. I suggest using instead the word "murder" which is accurate and places the deed within the context of the rule of law under which the US will seek to hold the perpetrators accountable.

Still other listeners asked that an explicit material warning be given on air. One Twitter follower questioned why NPR did so before a story about college rape, but did not do it on the beheading stories.

Mark Memmott, NPR's editor for standards and practices, was attentive in considering the complaints but concluded:

I think we need to use words that accurately describe what was done. In this case, the videos appear to show the men being beheaded. The word applies. I don't think a warning before saying the word is practical.

In longer reports, we effectively do give listeners a warning by first introducing the topic of ISIS and the killings before use of the word. But I think to require some sort of advisory before beginning each report is unnecessary. For one thing, there are few if any listeners who don't already know about the killings and how they were carried out.

On Aug. 22, Memmott had sent a related guidance to the newsroom on whether to say the men were "executed" or "murdered." Citing Webster's New World College Dictionary and the Associated Press Style Guide, Memmott decided: "Saying Foley was executed would imply that the Islamic State (or ISIS) is an entity that can legally carry out such sentences. It's better to say Foley was 'killed' or 'beheaded' or 'murdered.'"

The difference between "executed" and "murdered" seems a bit arcane to me. We commonly talk of "gangland" and other similar types of "executions." And while we abhor ISIS and see it as an illegitimate state that is not recognized internationally, it certainly seems to have established de facto governance over large parts of Iraq and Syria. The debates over how to define, whether legally or politically, a state or controlling institution as technically "legitimate"—whether we morally like them or not—are long and tortured. I will leave that to you.

On "beheaded," I agree with Memmott and the newsroom.

In introducing an August 29 interview on the history of beheadings and the surprising frequency of the practice in modern times, Robert Siegel, the host of All Things Considered, sympathetically began by saying, "Now a subject that's very hard to talk about and perhaps very hard to hear about as well."

But as he and Dawn Perlmutter, director of the Symbol Intelligence Group (a Philadelphia consulting firm that aids law enforcement agencies), noted in the interview, Amnesty International reports that about two people are beheaded each week in Saudi Arabia, where it is a form of legal execution. Siegel, meanwhile, noted that in the Bible, David cut off Goliath's head, a frequent image of Renaissance paintings. Henry VIII did the same to Sir Thomas More, other Catholic leaders and two of his wives. Computer games commonly include beheadings.

This is not to defend the repulsive practice, but it is to say that we cannot pretend that it does not exist—or that our refusing to use the word will somehow make the practice go away.