Accessibility links
Asking Bill Cosby If He Is A Serial Rapist : NPR Public Editor Listeners are divided by generation over whether host Scott Simon went too far in questioning "America's Dad." Cosby wasn't set up, however, and the charges are too many to ignore.

Asking Bill Cosby If He Is A Serial Rapist

Asking Bill Cosby If He Is A Serial Rapist 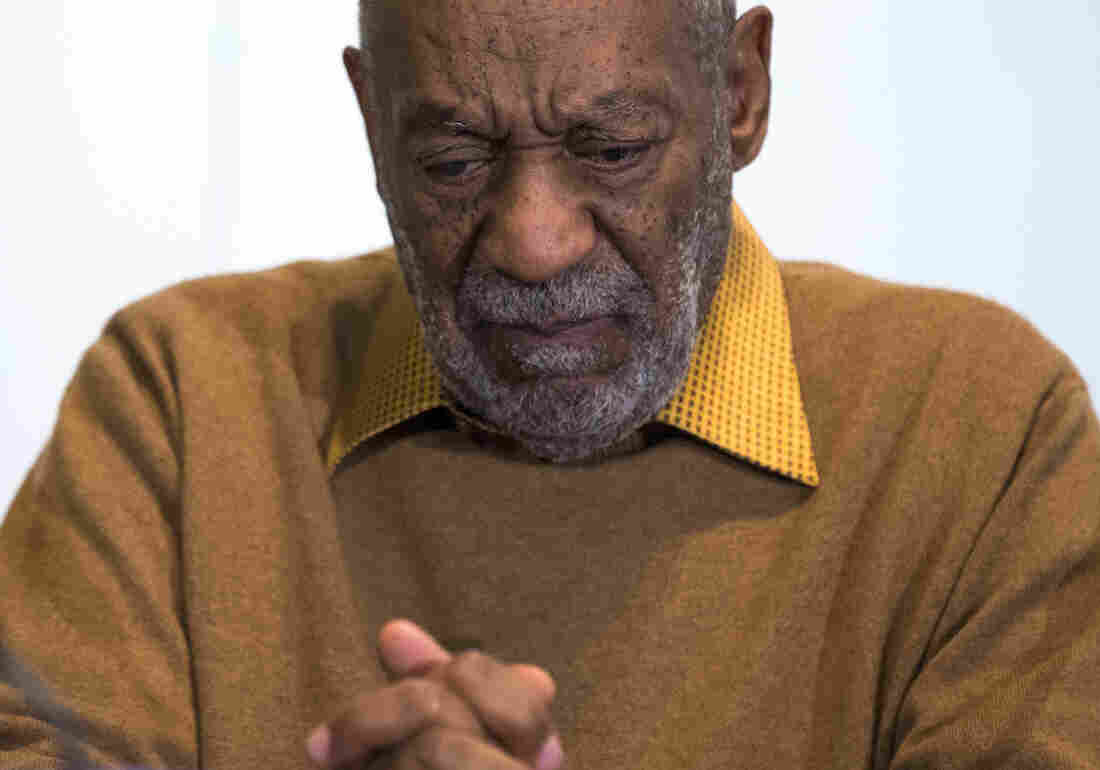 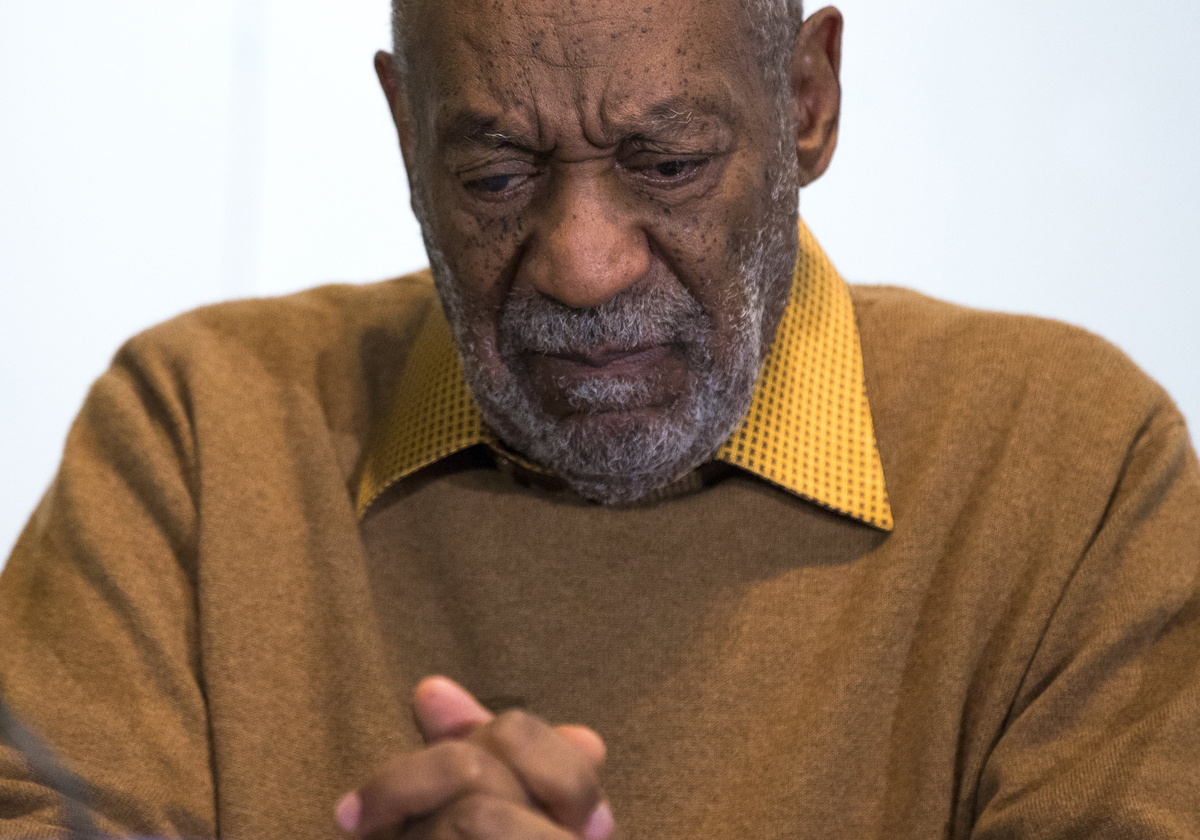 Entertainer Bill Cosby pauses during a news conference. Cosby's attorney said Sunday that Cosby will not dignify "decade-old, discredited" claims of sexual abuse with a response.

Did host Scott Simon unfairly—and sordidly—ambush Bill Cosby by raising rape charges in a Weekend Edition interview that was otherwise about art?

The 77-year old comedian and wife Camille—she was present—were being interviewed on air Saturday about the many pieces of art that they are lending to the Smithsonian Museum when Simon, at the end, changed the subject:

SCOTT SIMON: This question gives me no pleasure Mr. Cosby, but there have been serious allegations raised about you in recent days.

SIMON: You're shaking your head no. I'm in the news business. I have to ask the question. Do you have any response to those charges?

SIMON: Shaking your head no. There are people who love you who might like to hear from you about this. I want to give you the chance.

The number of responses by listeners has been overwhelming, but, curiously, they differ by medium. This suggests a generational divide, both in the appreciation of Cosby, once known as "America's Dad," and over how journalists should interview subjects and treat sexual abuse.

Emailers, who presumably trend older, were mostly critical of Simon.

But rape is another matter. Simon was right to confront Cosby, and did it with genuine professional aplomb. Chapeau.

"I was appalled by the question asked at the end of the interview about Cosby's latest accusations," wrote Judy Hafner of Corvallis, Ore. "I realize that it is news but it was in my mind a totally inappropriate time to ask the question and unfair to both of them when they were being interviewed about something entirely different. The silence that greeted Scott was deafening and well deserved!"

Chuck Snyder, of Bellingham, Wash, lashed: "Shame on Mr. Simon and NPR for this tactic. Mr. Cosby deserves an apology, as do your listeners."

Among the smaller number of emailers who disagreed, Raymond Luther of Washington, N.J., wrote, "I thought Mr. Simon would receive criticism for not being tough enough. Sadly, no one recognized how well Mr. Simon handled the interview."

Some 400 Facebook posts were roughly equally divided. All ages use Facebook, though its audience is growing grayer. The online commenters at the bottom of the web story sided mostly with Simon, but, meanwhile, what might be most telling is that so did the traffic on Twitter, which appears to have the youngest audience. A typical tweet:

@nprscottsimon Thanks for acting with such grace, but dedication, in that difficult & important moment.

Cosby is venerated among older Americans, black and white, for his groundbreaking roles that presented a new, middle class image of African-Americans on prime-time television, first in I Spy from 1965 to 1968 and then in The Cosby Show from 1984 to 1992. His charming comedy albums were bestsellers, and he was a spokesperson for Jell-O. Challenging this legacy is not something a reporter does lightly.

Allegations of sexual abuse by Cosby have lingered for years, but never got much traction. No criminal charges were ever brought, and a 2005 civil suit was settled out of court. But as Cosby has been making a comeback in recent months through a new biography and planned television shows, the allegations resurfaced too. Two of his alleged victims released more details, while a video clip of a standup routine by a young black comic, Hannibal Buress, went viral online. Buress, critical of Cosby's moralizing, says in it, "Yeah, but you rape women, Bill Cosby, so turn down the crazy a couple notches."

We do not agree to limit questions w/ anyone we interview. We hope our record for both taste & rigor speaks for itself.

Six accusers have now publicly come forward, most claiming that Cosby drugged them first. Over a dozen unnamed alleged victims were listed in the settled suit. The incidents were said to have occurred between the 1960s and 2004. Spokesmen for Cosby have denied the claims, saying the incidents were either misunderstandings or didn't happen.

Scott Simon was not the first at NPR to deal with the charges. In September, television critic Eric Deggans did a Code Switch blog post on the biography, Cosby: His Life and Times, by former Newsweek editor and CNN executive Mark Whitaker. In the post, Deggans asked the author why the sexual assault charges weren't mentioned in the book. Whitaker said because he couldn't prove them.

Gene Demby, lead blogger on the Code Switch team, returned a day later with a round-up of articles on Cosby's legacy. One section, citing an article in Gawker from earlier this year, was titled, "Who Wants to Remember Bill Cosby's Multiple Sex-Assault Accusations?"

What Simon did was to force Cosby for the first time in many years to face the charges publicly.

Contrary to what many of the critics of Simon charged, the interview was not a setup. Cosby's representatives proposed the interview, though admittedly to talk about art, Simon and editor Sarah Gilbert said. The interview was done Tues. Nov. 6, at the Smithsonian in Washington, D.C. In fact, it immediately followed a similar interview with the Associated Press in the same room on the same art subject. The AP reporter similarly raised questions at the end about the assault allegations, but AP did not release the videotape until this morning, five days after the NPR airing.

In the AP video, Cosby does speak in response to the questions, but only to say that he refuses to answer and, at the end, to demand that AP editors cut that section of the interview from what they air. The written AP story about the art donation, released November 8, reports in the last paragraph that Cosby declined to comment on the allegations.

This may be the first time in a long while that Bill Cosby can't control the public conversation about Bill Cosby.

Simon and Gilbert said the Weekend Edition staff prepared their questions carefully, and how Simon might react to any of several responses by Cosby. Gilbert said that Cosby and his publicists did not mention to them the AP questions or to try to set ground rules preventing such questions from NPR. "We could not duck asking," Simon tweeted afterwards. "Not just personal philandering. Serious physical assault of many women over time."

"We even felt he might welcome the chance to say, 'It's not true,' " Simon wrote.

In the event, Simon described for the audience Cosby's silence and shaking of his head. Simon let the silence run after each of his three questions for between two and five seconds. A story in The Washington Post called it "perhaps the most significant dead air in the history of National Public Radio." That seems an exaggeration, but the presentation for us in the audience couldn't have been more powerful radio.

In the days afterwards for Cosby, meanwhile, NBC killed the sitcom, Netflix postponed release of a special celebrating the 30th anniversary of The Cosby Show, and various scheduled appearances by Cosby were cancelled.

NPR's standards and practices editor Mark Memmott not only defended the interview, but also held it up as a model for future difficult conversations. He wrote in a staff memo:

Scott gave the comedian a chance to respond to accusations involving alleged sexual assaults. Though some of the allegations go back a decade or more, they have been in the news in recent weeks. [NPR reporter] Eric Deggans reminded us today that Cosby has not directly addressed them. Cosby's representatives have said the accusations are either not true or are due to misunderstandings.

NPR journalists believe that "to secure the public's trust, we must make it clear that our primary allegiance is to the public." As we do that, we treat those we encounter with respect. If we "ask tough questions, we do so to seek answers — not confrontations."

Simon himself discussed the interview with CBS News and via a series of tweets. "We do not agree to limit questions w/ anyone we interview. No one. We hope our record for both taste & rigor speaks for itself," he wrote.

The host even managed to add a bit of bravado to a tweet: "It did not take courage to ask question @BillCosby I've covered 10 wars & Chgo City Council. I just did what I should."

But let's allow him a little dramatic license. I agree with those listeners who wrote to abhor our modern fixation as a society and as journalists with the sexual adventures of public figures, including politicians. But rape is another matter. The charges are too many to ignore. Simon, Gilbert and the Weekend Edition staff were right to confront Cosby, and they did it with genuine professional aplomb. Chapeau.

I think you're seeing a struggle between media new and old, between generations and whether we're protecting access by not asking questions that are too uncomfortable.

While Weekend Edition gave us the raw material, meanwhile, other shows and online posts provided the needed context. Deggans, Demby and media reporter David Folkenflik reported informed analysis on Cosby's changing cultural relevance among generations and on the assault charges. They also helped us understand some of our own reactions.

"This may be the first time in a long while that Bill Cosby can't control the public conversation about Bill Cosby," wrote Deggans. He noted that for years the comedian jealously protected his business and his image from journalists and television executives. But the rise of social media makes it impossible today for anyone to control a message, especially among young people whose antenna are highly attuned to hypocrisy and to sexual abuse.

Cosby last week was forced to take down a Twitter request for fans to send pictures and create memes based on him. What he got instead, Deggans reported, was a flood of accusations on the assault allegations and the viral video of the comedy routine by the 31-year-old Buress.

Speaking on Morning Edition after the Simon interview, Folkenflik observed, "I think you're seeing a struggle between media new and old, between generations and also between the question of, you know, are we protecting access by not asking questions that are too uncomfortable?"

An earlier version of this story reported that the AP story was published Nov. 10. The story originally appeared Nov. 8.