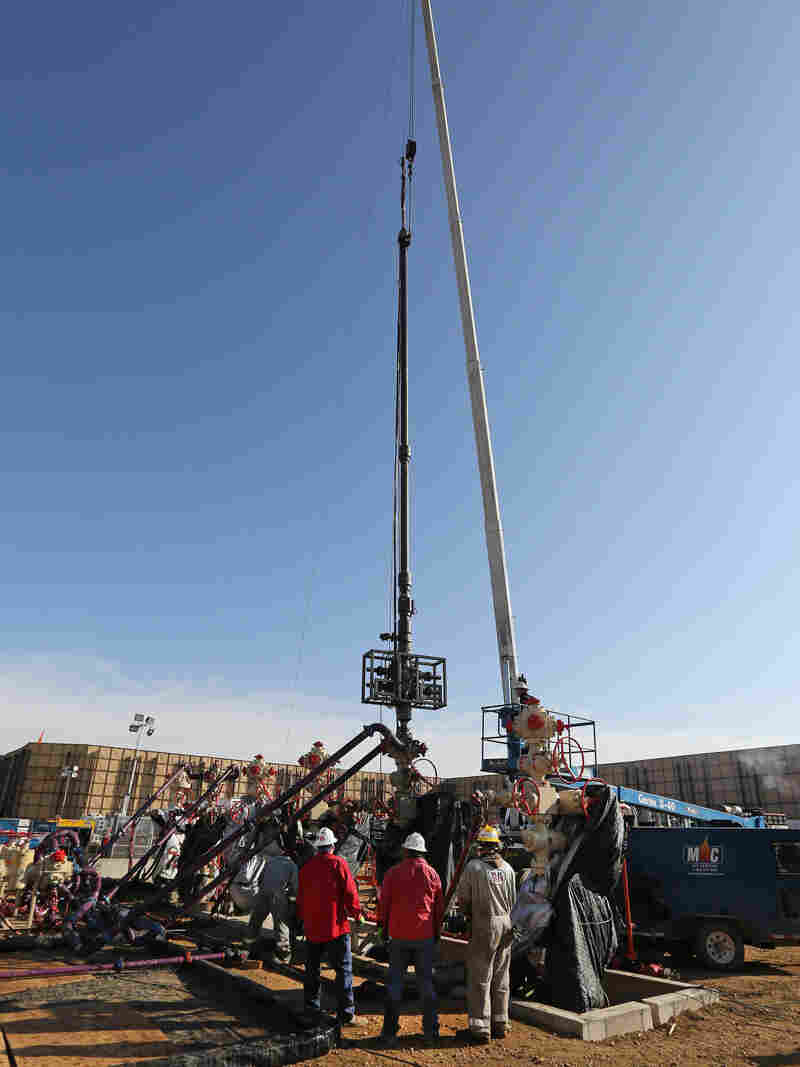 In this March 2014 photo, perforating tools, used to create fractures in rock, are lowered into one of six wells during a roughly two-week hydraulic fracturing operation near Mead, Colo. Brennan Linsley/ASSOCIATED PRESS hide caption 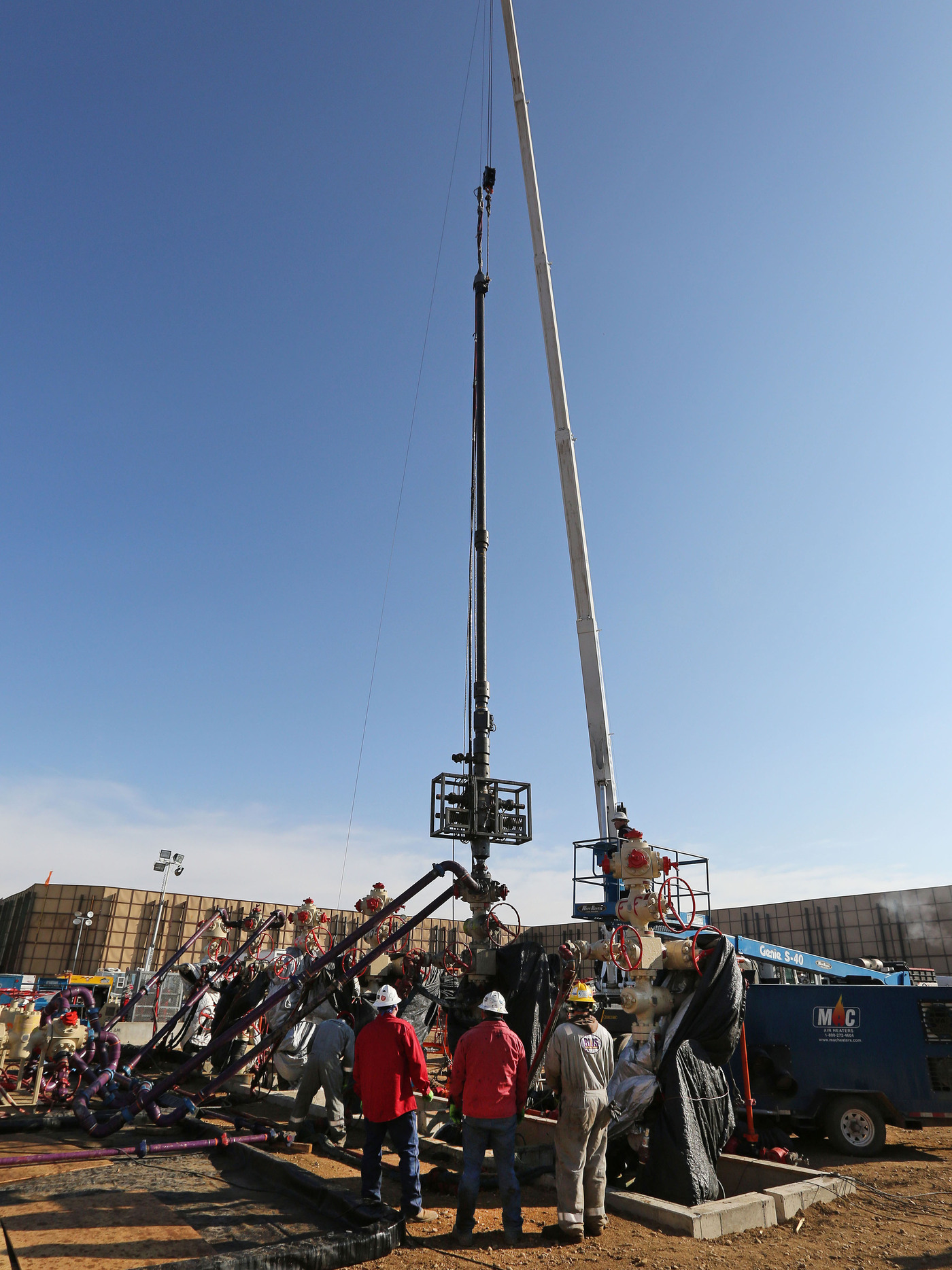 In this March 2014 photo, perforating tools, used to create fractures in rock, are lowered into one of six wells during a roughly two-week hydraulic fracturing operation near Mead, Colo.

As environmental activists seek increasingly to equate fossil fuel companies with demonized tobacco, and as the movement pushing pension funds and endowments to divest themselves of fossil fuel stocks gains momentum, NPR finds itself under renewed attack for its acceptance of corporate underwriting money from America's Natural Gas Alliance (ANGA), the trade and lobbying group for natural gas producers.

In late October, a campaign by the group Environmental Action generated more than 500 emails to the Ombudsman inbox protesting NPR's acceptance of underwriting funds from ANGA. The sponsorship credits went off the air for a short period of time, but restarted in February, in frequent rotation. (It should be noted that Environmental Action made a false claim that NPR hosts read those underwriting credits, which they do not.)

Here's a typical credit: "America's Natural Gas. Learn how combining solar and natural gas at a Florida power plant makes it possible to generate electricity 24 hours a day, seven days a week, even when the sun isn't shining. ThinkAboutIt.org." The credits appear both on air and on NPR's website.

ANGA sponsorship concerns are not new; see previous ombudsman takes on the issue in 2011 and 2009. Many of those who are writing now object to the benign language of the credits, which, not surprisingly, does not acknowledge the negative effects of hydraulic fracturing ("fracking"), a highly controversial method of drilling for natural gas.

Christina Molinari of New York, N.Y., wrote: "The ethics and the values of the two organizations just don't jive," referring to NPR and the gas industry. Doug Roysdon of Bethlehem, Pa., said the spots are essentially NPR's "endorsement of the tragic environmental destruction now taking place."

Other listeners, including Rich Thompson-Tucker, of Dorset, Vt., worry about how the underwriting affects NPR's reporting. He wrote my office recently: "It is a highly controversial issue and I think there is a real conflict of interest when you accept money from the fracking industry, and are attempting to report objectively on this at the same time."

Still others, like Susan Driver of Sacramento, Calif., see a connection with NPR's decision last year to restructure how it covers the environment, reducing the number of reporters dedicated solely to the beat. (CEO Jarl Mohn, in a March interview with Diane Rehm, said NPR is "covering climate and the environment every bit as much as we have" in the past. I'll be looking into that subject over the next couple months.)

"I think there is a real conflict of interest when you accept money from the fracking industry, and are attempting to report objectively on this at the same time."

How NPR accepts or rejects underwriters is a question that comes up often, and ANGA credits are not the only sponsorships that some listeners find objectionable. The Vermont Teddy Bear Company in February promoted a "50 Shades of Grey" bear, tied to the release of the movie of the same name. Maria Jette, of Excelsior, Minn., called that "a very, very unfortunate choice for a sponsorship message," given that it "is supposed to adorably reference a loathsome piece of S&M 'literature.'" In early March, some listeners wondered why NPR was still accepting underwriting funds from longtime supporter Lumber Liquidators, after a report on CBS' 60 Minutes alleged some of the company's products had unsafe levels of formaldehyde. (Bryan Moffett, general manager of National Public Media, which handles NPR's corporate sponsorship sales, said NPR has "never proactively pulled a funder from NPR based on allegations," although it does pay attention to the type of allegation, and sometimes sponsors themselves ask to pause their campaigns if they are in the middle of a controversy. NPR News did a follow-up report on the controversy over the products, in which it disclosed that Lumber Liquidators was a sponsor.)

First an explanation: Most listeners, myself included, hear the sponsorship credits as ads, and many sponsors treat them as such, timing their support to, say, an upcoming movie launch, as in the case of the teddy bear. NPR itself has long touted what it calls the "halo effect" which leaves listeners with a more positive view of companies that sponsor NPR.

But legally, the credits are not ads, but represent an acknowledgment by NPR of those who support it. As NPR's underwriting guidelines state, funders "deserve credit for their support of public radio."

NPR says its default policy is to accept sponsorships, evaluated on a case-by-case basis; the 2014 annual report contains the most recent comprehensive list. According to the corporate sponsorship page of NPR.org:

All NPR funding sources, including corporate sponsors, are considered under the "access" principle, which means that NPR has no list of sources from which funding will not be accepted. However, potential conflict of interest and problems of listener misperception, confusion, or similar reason regarding the funder's role and/or influence on programming will be considered in accepting or rejecting underwriting.

By being open to all funding sources—and therefore by not being dependent on any one source or group of sources—NPR believes it can better maintain its independence, said Greg Lewis, NPR's deputy general counsel.

And indeed, in addition to the natural gas sponsorships, NPR has recently aired an underwriting credit from "Margot and John Ernst, supporting North Country Public Radio in Canton, New York and NPR's environmental coverage which helps to raise awareness on issues surrounding climate change." The Diane Rehm Show aired a credit from "Vicki and Roger Sant, and Island Press, which offers solutions to environmental problems — in print, in person, and online at Island Press.org" and other another from "The Grantham Foundation for the Protection of the Environment, supporting strategic communications and collaboration to address the world's pressing environmental problems. More information is available at Grantham Foundation.org."

But the open access policy doesn't mean that NPR is required to accept funding from every source. Lewis said potential sponsors are evaluated based on the particular circumstances involved. For example, in the case of a hypothetical tobacco funder, NPR might consider that cigarette advertising on radio and television has been illegal since 1971. "If there is a federal statute dealing with a particular product we don't want to unintentionally violate a statute," Lewis said. (That said, as noted before, underwriting legally is not advertising.)

Moffett, of National Public Media, did say, as an aside, that while NPR has an open access policy, it does not always accept the language sponsors would like to use in their credits. "We tell sponsors 'no' far more than we tell sponsors 'yes,'" Moffett told me. "We've lost lots of money from people who walk away."

By being open to all funding sources...NPR believes it can better maintain its independence.

Why do NPR sponsorships come in for so much criticism? For one, listeners cannot avoid hearing sponsorships on the radio in the same way they can avoid looking at ads in a printed newspaper or magazine — or zap through TV ads on the DVR. And the amount of NPR underwriting continues to go up; last fall, the amount of time devoted to credits in Morning Edition and All Things Considered jumped by 30 seconds, to a total of 2 minutes and 20 seconds per hour. (The number of sponsors stayed the same but the length of the credits grew.) That figure doesn't include additional time that member stations devote to local sponsorships.

The amount of underwriting is going up because the dues and fees paid by member stations (which are in turn partly funded by listener contributions), do not provide enough financial support to enable NPR to do its job. Corporate sponsorships made up 22 percent of NPR's unrestricted operating revenues on average over the three-year period covering the 2012 to 2014 fiscal years.

How much is too much corporate sponsorship is a separate issue, one that is hotly debated in the public radio system. But my sole concern is NPR's journalism. And despite the passionate arguments of some listeners, I don't see any evidence that the ANGA underwriting has compromised NPR's reporting. As has been noted by ombudsmen before me there is a "firewall" that separates the fundraising and editorial sides of the organization, a concept dealt with in the NPR ethics handbook:

We've often spoken of a "firewall" that separates NPR's journalists from our funders. Properly understood, the firewall is a useful metaphor. In engineering, a firewall isn't an impassable boundary, but rather a barrier designed to contain the spread of a dangerous or corrupting force. Similarly, the purpose of our firewall is to hold in check the influence our funders have over our journalism.

I believe that firewall works and I am confident that NPR's reporters simply aren't paying attention to who is paying the bills when they set about to report a story or cover a beat. Nor are editors directing coverage based on the underwriting they might hear. If they were, stories like this one probably would not have gotten on the air.

If NPR were to start picking and choosing its sponsors that would cast doubt on the very firewall it has created to guard against sponsors influencing its coverage. How could any report on a controversy be seen as fair and unbiased if someone inside the organization had decided that sponsorship from one side or the other was objectionable?

While the morality of accepting fossil fuel funding will no doubt continue to be battled out in coming years, from the journalism point of view I can't argue with NPR's access policy.