Accessibility links
Asked And Answered: On 'Thugs,' WikiLeaks And Conspiracy Theories : NPR Public Editor Listeners had a lot of opinions about an All Things Considered guest's position, and two other stories had the audience talking. 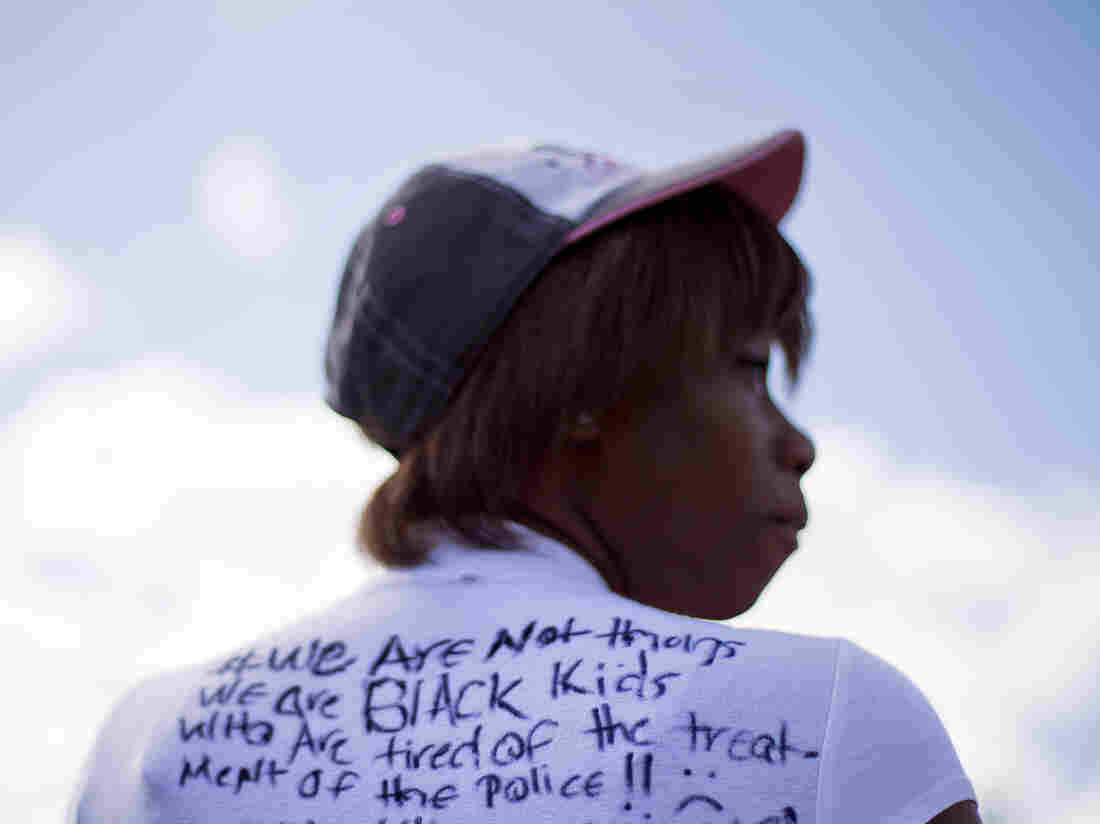 Alize LeGrange, 18, wears a T-shirt she made in response to Baltimore Mayor Stephanie Rawlings-Blake's comments about "thugs" trying to tear down the city on Wednesday, April 29, 2015, in Baltimore. David Goldman/AP hide caption 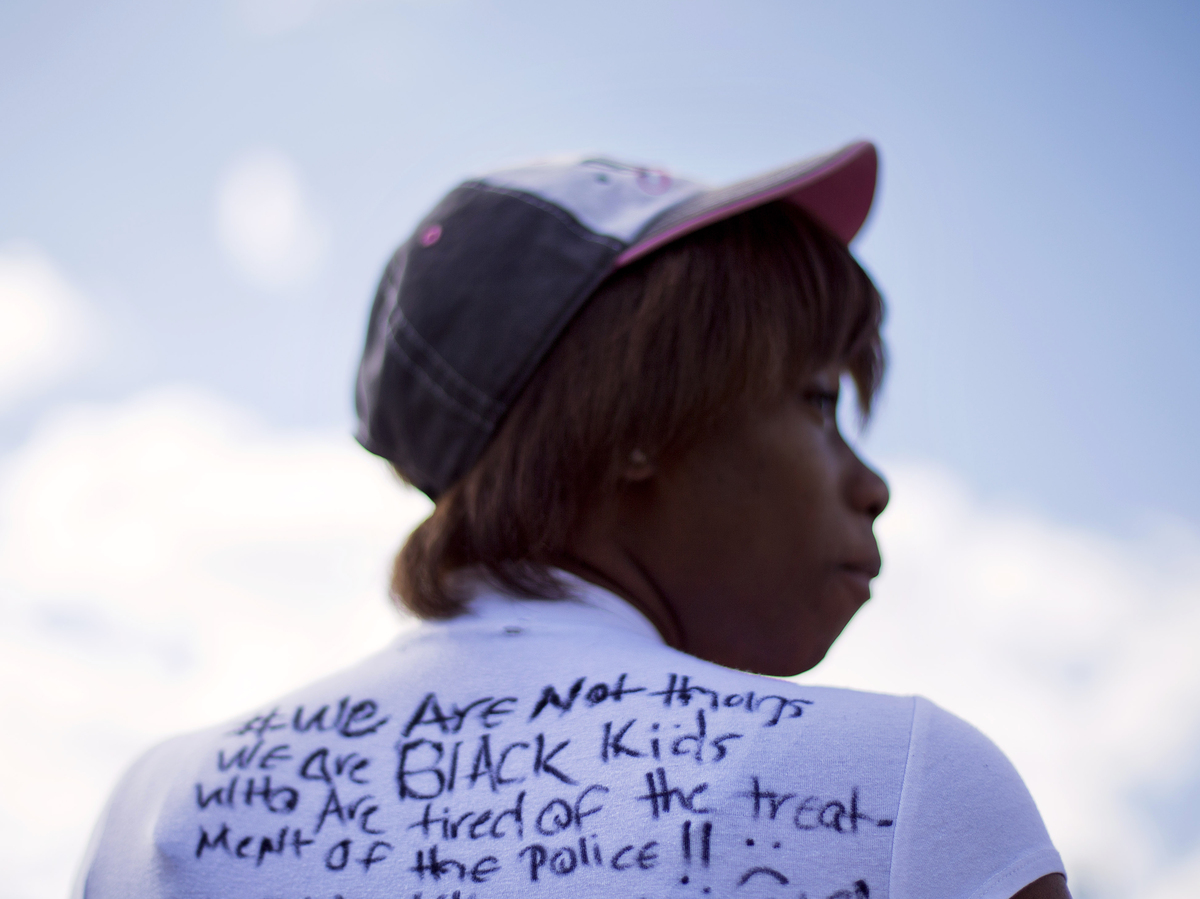 Alize LeGrange, 18, wears a T-shirt she made in response to Baltimore Mayor Stephanie Rawlings-Blake's comments about "thugs" trying to tear down the city on Wednesday, April 29, 2015, in Baltimore.

Listeners had lots of questions (and of course, opinions) in recent days. Here are some answers.

Many listeners had strong feelings about Melissa Block's All Things Considered interview with Columbia University linguistics professor John McWhorter about the changing meaning of the word "thug" and its differing nuance in different ethnic communities. McWhorter argued "It is a sly way of saying there go those black people ruining things again. And so anybody who wonders whether thug is becoming the new N-word doesn't need to. It most certainly is." And, he added, "when black people say it, they don't mean what white people mean." The program aired a number of listener responses in an "angry letters" segment the next day.

Lisa Miotto, in Bettendorf, Iowa, was one listener who wrote to my office, calling the interview "an insult to anyone who uses the word thug to mean what most of the commenters and I mean when I say it: a bad guy of any race." She asked for a retraction, an apology, "or at least an explanation."

I liked the interview, which, it should be noted, is labeled as "opinion" at NPR.org. Here's some background from Block on how it came about, on a very tight deadline.

The idea started with a 9 a.m. email from an editor who was thinking about the question of the word "thug" in light of its use by two Baltimore politicians—and their subsequent apology—and President Obama, who did not apologize.

"I was interested," Block told me by email. "I had interviewed the Baltimore city council president (who is African-American) the day prior, and I'd asked him why he apologized for using the word 'thug.' I'm always interested in discussion of language and etymology. And in the case of Baltimore, it was clear that this word - thug - had added freight, especially in the black community."

The staff started by looking at a Washington Post story on the word and one at The Atlantic. But instead of interviewing a reporter, Block said, "We decided we were interested in hearing directly from someone who could address that broader cultural question; not a reporter who compiled their thoughts. Given that it was black officials who had used the word and in at least two cases - the mayor and council president - backed down from it very quickly, it also seemed appropriate to get the perspective of someone in the black community, not a white writer translating what black people think."

By this time it was 12:41 p.m., and most interviews for the show need to be completed by 3 p.m. Block suggested talking to Michael Jeffries at Wellesley College, who has a take similar to McWhorter's on the word. The show's booker made requests to linguists at Brown and Stanford universities, as well as to McWhorter. He was ultimately lined up to tape the interview with Block at 2:45 p.m. but her prior interview ran late. They ended up talking for 11 minutes total, ending at 3:15 p.m.; seven minutes of that conversation ended up on air.

Block said she fully stands behind the interview, adding, "I greatly value our interest as a show in putting provocative viewpoints on our air. Stimulating a discussion among our listeners is a good thing."

Some listeners said they would have appreciated alternate views on the word. Block said, "I would disagree with the suggestion that if we air a provocative point of view we need to balance that with another voice taking a contrary position. We book guests who have strong opinions on a daily basis. It's my job as host to challenge guests and question their thinking, when appropriate. That's my lift."

Another recent question concerned an April 30 episode of On Point, a program produced at WBUR in Boston and distributed by NPR, with the title "WikiLeaks Verges on Gossip Territory." The show raised questions about WikiLeaks' decision to publish personal information obtained from the hacking of Sony corporate files last November.

In response to questions from guest host Jane Clayson about the propriety of what WikiLeaks had done, the guests several times demurred, with some variation of "you'll have to ask them," meaning WikiLeaks.

This exchange in particular would have benefited from a WikiLeaks voice:

"We have a harm-minimization policy. We have a way with dealing with personally-identifying information but there are legitimate secrets. You know, your records with your doctor, that's a legitimate secret. But we deal with whistleblowers that are coming forward that are well motivated."

Clayson: "So now there he is in 2010, Julian Assange, WikiLeaks founder. And now this last week, making a turn around. Medical records, credit card numbers, private email addresses, salary data, I mean, what's changed in the last five years?"

Cohen: You'd have to ask him. I look at this and I can't see any evidence that WikiLeaks redacted information that was private. I can't see any evidence that they were discriminating in the kinds that they put out there. If you go through the archive, it appears to be just a data dump, basically, without any sort of discretion exercised in how this material was put out there.

The show's executive producer, Karen Shiffman, told me her staff, in fact, reached out to WikiLeaks, and did not get a response. The staff also reached out to a number of WikiLeaks supporters in an attempt to get a guest who could speak for the organization, and received only "no" responses. In that case, my take is that it would have been better to say that, so the listeners were aware. Shiffman agreed.

By the Fence in Texas

Finally this week, my office received a number of emails regarding Wade Goodwyn's very funny online piece posted on May 2: "Texas Governor Deploys State Guard To Stave Off Obama Takeover." To quote the column itself: "When rookie Texas Gov. Greg Abbott announced he was ordering the Texas State Guard to monitor a Navy SEAL/Green Beret joint training exercise, which was taking place in Texas and several other states, everybody here looked up from their iPhones. What?" He goes on: "It seems there is concern among some folks that this so-called training maneuver is just a cover story. What's really going on? President Obama is about to use Special Forces to put Texas under martial law."

Ken Topping, in Houston, was one listener who seemed to be laughing, calling it humorous, and adding that it "reminded me of [the late Texas political commentator] Molly Ivins in style as well as strong, left-leaning perspective." But he added, "Is this called reportage, editorial, or political activism?"

Domenico Montanaro, NPR's lead political editor, told me by email that when Goodwyn pitched the piece, "I was immediately interested. Anytime, there's something going on in the states that isn't getting much national attention, but could have a national hook, it's worth looking at. When Wade turned in his story, my instinct was to re-work it as a regular news story. But, on second thought, I decided this was no regular story, and Wade has such a unique voice, that why not let it run as a column? It's not the norm for the site or for our politics coverage, but I think it's good, from time to time, to experiment, take some risks and mix it up when it works."

The piece has been hugely popular, topping 1.4 million page views at NPR.org, and nearly 5,900 online comments, so far. It was not labeled as a column; I think it should have been clearer that it was not a normal story, and Montanaro agrees.

Goodwyn told me the piece reflects the current complexity of Texas politics, and the divide among Republicans there. He said he does not believe it was "particularly politically slanted in one way or the other, although maybe the subject is because we're talking about conspiracy theories. Clearly I was having some fun with it, but I actually didn't feel like I was being disrespectful to anybody, including those who might believe in it."

For his more serious take on the story you can listen here to his May 6 conversation with Morning Edition host David Greene.

"Not all conspiracy theories are created equal. Some are real," Goodwyn said. He covered the Oklahoma City bombing 20 years ago, when theories swirled about other co-conspirators, and said he "was able to ferret out the fact that there was a lot to them." He said he was not taking a side opposing the conspiracy theory this time around either, but added, "These kinds of stories are best told by the fence."

Goodwyn told On the Media host Bob Garfield that he hopes, for readers of the piece, "While maybe it might spur you to roll your eyes you don't think I was sneering or condescending. Because in fact that's not how I feel." He added, "I hope there's some room in between having some humor in a piece and have it be mean-spirited." You can listen to that interview here.