Accessibility links
Mailbag: Should NPR Give David Duke Airtime? : NPR Public Editor Listeners had mixed feelings about whether or not Morning Edition should have interviewed the former Ku Klux Klan leader. 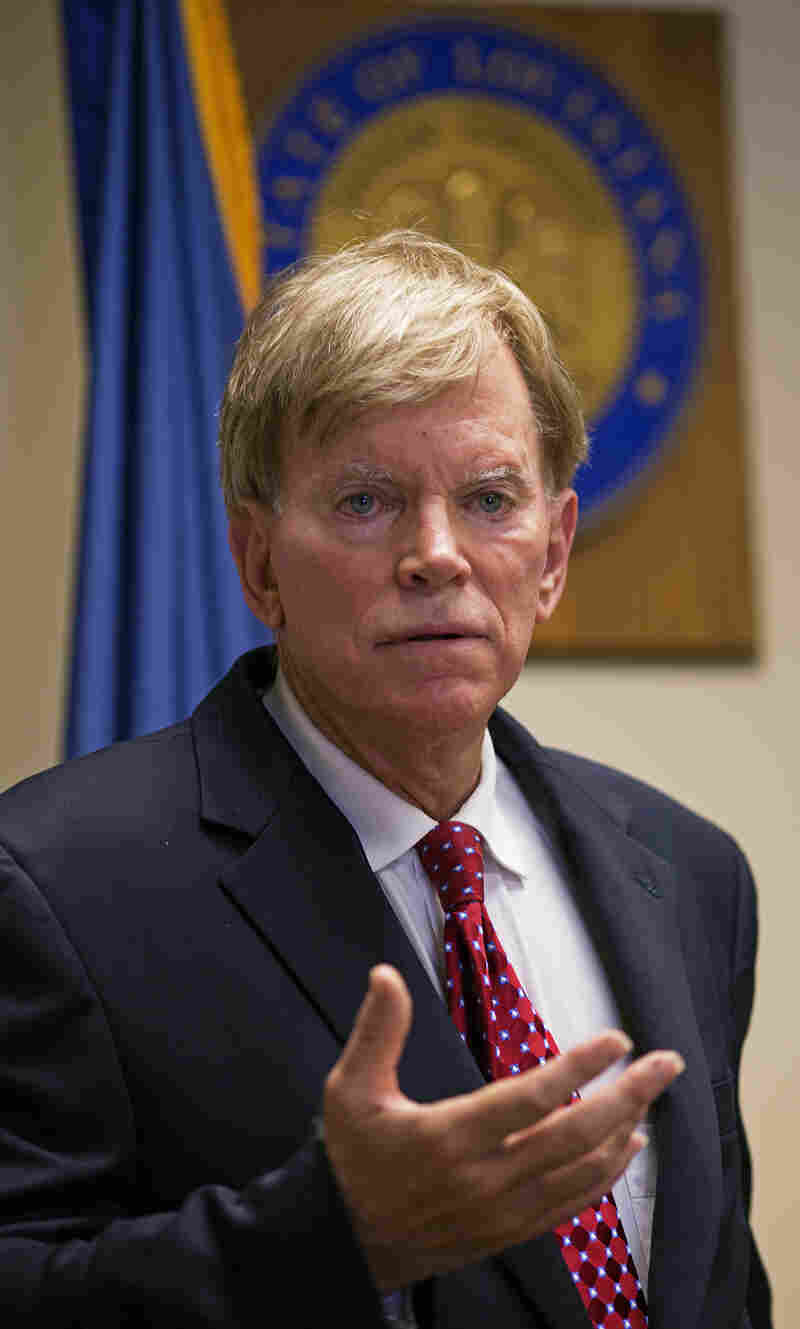 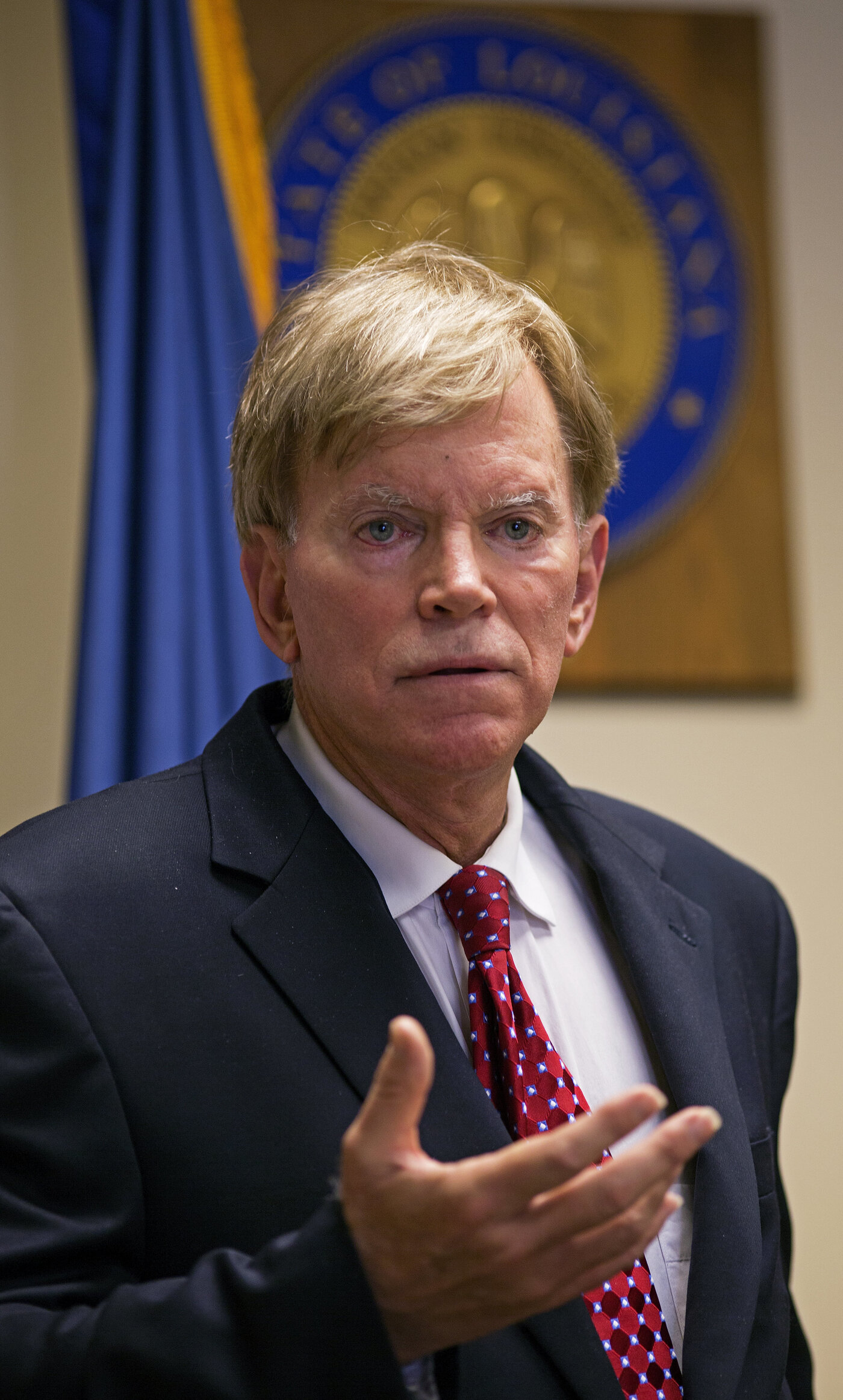 Former Ku Klux Klan leader David Duke talks to the media in Baton Rouge, La., on July 22, 2016, after registering to run for the U.S. Senate.

On Friday, Morning Edition host Steve Inskeep interviewed David Duke, the former Ku Klux Klan leader who is running for U.S. Senate in Louisiana. Duke ran for the same office twice in the 1990s and lost; in announcing his new candidacy, he cited the current political climate, as evidenced by support for Donald Trump's campaign.

Not surprisingly, the interview provoked a good deal of listener reaction, in letters to NPR and to my office, tweets, comments at NPR.org and thousands of comments and feedback on Facebook. Many questioned why NPR would give "him such a large platform to spew his hate," as Matt Holtz of East Lansing, Mich., put it in a letter to my office. Others were more emphatic, and saw bias at work, such as Doug Pradat, of Birmingham, Ala., who wrote, "That was a most despicable piece of 'journalism.' Funny how one would never hear a smear story on the other side of the political spectrum. Your leanings are apparent every day, but this takes the cake."

Hundreds on Facebook showed appreciation for the interview. Jose F. Estrada commented: "I'm glad they interviewed him. Many of the things he said were disgraceful, but it shines a light on a reality in the United States right now ... was an — interesting — interview." A sampling of the letters and tweets are below.

Inskeep answered the question of why NPR interviewed Duke in his introduction to the conversation: "We listened to the former Klansman because he represents the way white supremacists" attach themselves to the Trump campaign. The NPR.org article on the Two-Way blog also answered the question in a similar editor's note.

I asked Cara Tallo, Morning Edition's deputy executive producer, to elaborate on the decision to air the interview. She told me: "We knew that there would absolutely be a great number of folks who would hear this and be angry or offended. However, it felt important to represent this thread of conversation that is very real and present in this election cycle, whether we feel like it's legitimate or reasonable or logical, at all."

Hearing someone in their own words lets listeners draw their own conclusions, Tallo said, and someone with views so outside the mainstream is rarely heard from directly on NPR, she added. At the same time, producers felt it important in this case to add context from Inskeep, to correct or challenge some factual errors.

As for the charge from some that NPR was attempting to "smear" Trump, Tallo said: "We were trying to provide insight into a group of people that has been very vocally supportive of Donald Trump and I do feel we were very clear about Trump's statements disavowing them."

My view: I thought the interview was well handled on all fronts.

Here is a sampling of the letters sent to NPR:

From a listener in Austin, Texas, who gave only her first name, Mona: "This man was given prime air time to discuss Jewish control of Hollywood and his atrocious views about minorities. Steve Inskeep was obviously exasperated but I find it completely wrong to air and give legitimacy to opinions like this. We do not need to act like it's reasonable to hold opinions like David Duke's. Airing them on Morning Edition grants that legitimacy."

From a listener named Emily, from Houston: "This guy doesn't deserve to be given the time of day on your show. He is inflammatory at best, and dangerous at worst. It's clear the interviewer doesn't think much of him either, so why allow him national airtime for free?

From Zoe Russek, of Chicago, who identified herself as the granddaughter of a Holocaust survivor: "Dear Steve Inskeep, I woke up this morning to your interview with David Duke. I woke up and I wanted to scream at you. And then it dawned on me that, in fact, I should be thanking you ... I want to thank you for embodying the First Amendment, for allowing all views to be heard, for attempting to ask the tough questions and for making it clear on your show that David Duke is lying about my people. In a world where speaking your mind can put you in jail in some places, I am grateful for my right to say what I want. I'm grateful that that right is extended to terrific reporters like you. And I am grateful that it is extended to people who I disagree with, with every fiber of my being, including David Duke."

William Griffiths, of Buford, Ga., wrote that, "spending a significant amount of time interviewing David Duke, a person whose views are supported by such a small portion of the population, and repeatedly trying to tie him and his views to Trump, just adds fuel to the fire supporting Trumps claim that the 'system' is rigged."

From Judy van Tijn, of Moorestown, N.J., who is also "the daughter and granddaughter of Dutch Jews who survived, fought, and did not survive the Holocaust": "I understand the media definition of equal access and I understand the necessity to cover fairly Donald Trump and his campaign whether I agree with his ideas or not. But David Duke represents the worst and most poisonous set of ideas that advocates the same extreme terrorism as any other terrorist in the world regardless of religion, nationality, race or ethnicity. ... I understood the purpose of the interview was to show the way that Trump's statements can be manipulated to align with Duke's. But the fact of the interview allowed him an opportunity to sound like a reasonable candidate and to air his ideas as if they were reasonable ideas."

Amy Segal, from Newton, Mass., wrote: "I listened in disbelief as I realized this was not just a news story about the racist senatorial candidate but rather a regular interview as if he were just another candidate. Steve Inskeep should be ashamed of himself, using the same respectful tone with him as he does with legitimate public figures. Duke himself said that his views are becoming mainstream thanks to Donald Trump (something Trump has tried to both use and disavow), and giving Duke a platform — as opposed to merely reporting on his actions — gives support to this position."

. @MorningEdition @NPR Just because Duke is running 4Senate doesn't mean u should legitimize the campaign. This is how Trump became popular

“You think Trump voters are your voters?” @NPRinskeep asked David Duke. “Well, of course they are,” he replied. https://t.co/6khucLX6D2