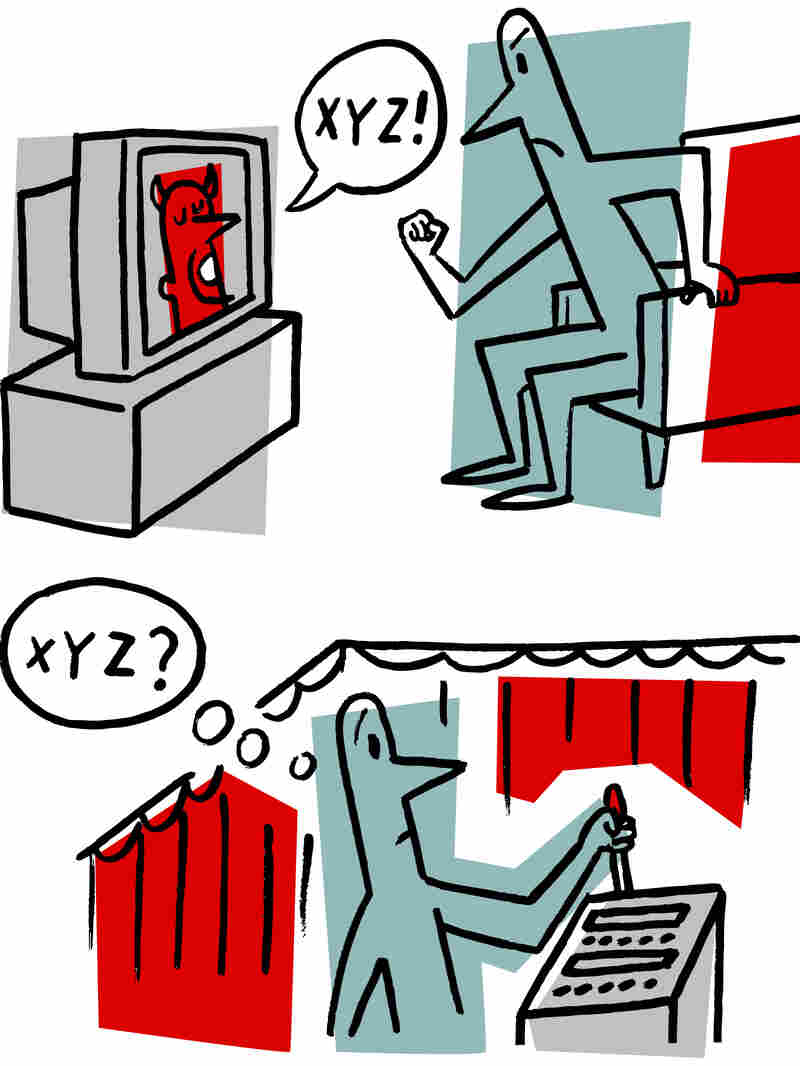 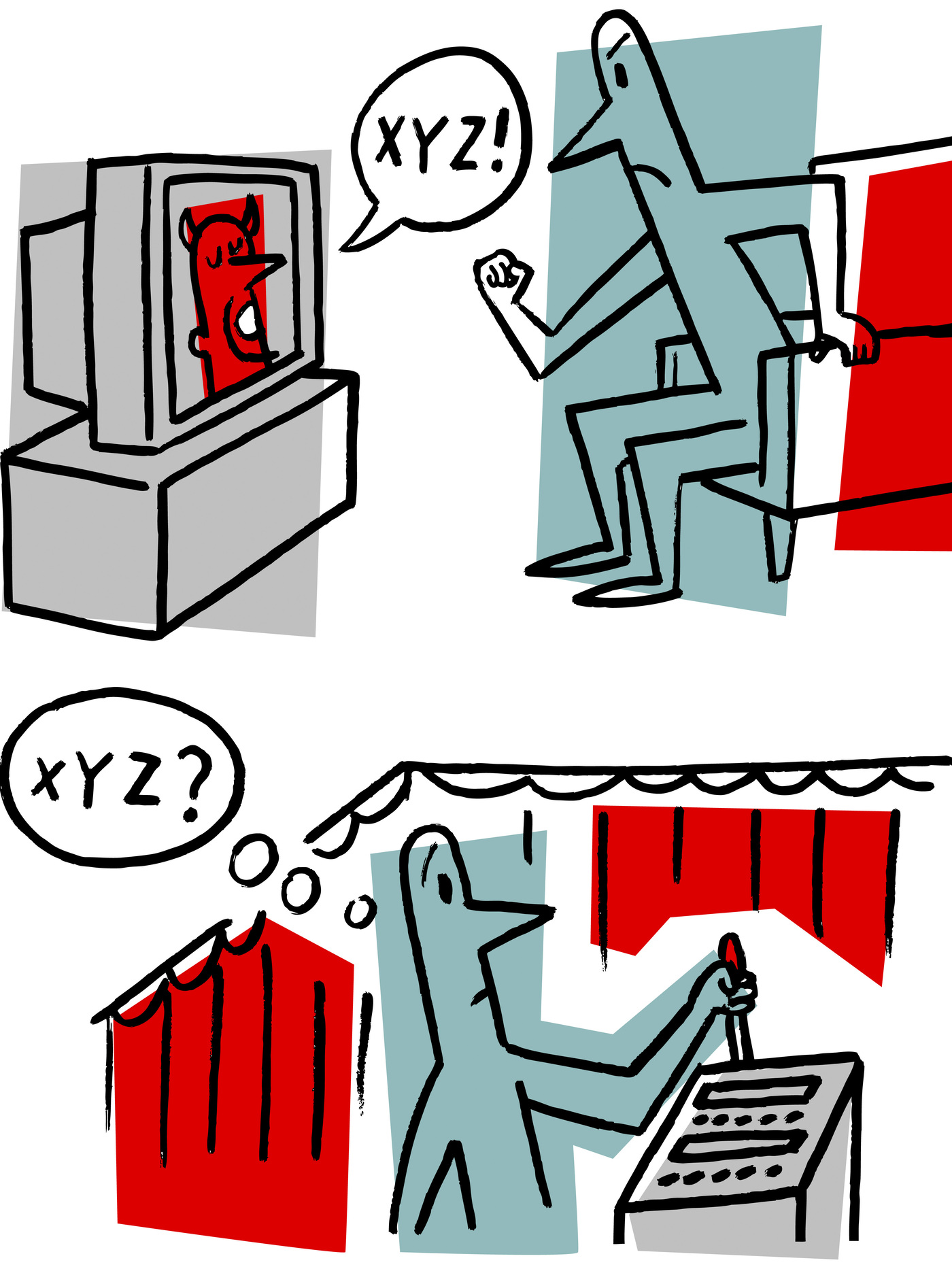 Four years ago, my predecessor, Edward Schumacher-Matos, wrote about listener unhappiness concerning NPR's conversations with ordinary voters, or what is known in journalism as "person on the street" interviews or vox pops. Similar criticisms have been rolling in to the Ombudsman mailbox in recent weeks.

The current complaints we have received largely revolve around a Morning Edition series of interviews with four voters each in Georgia, Arizona, Ohio and Florida — divided equally among Hillary Clinton and Donald Trump supporters (none of the 16 supported a third-party candidate, although NPR has interviewed supporters of those candidates in other pieces). A writer who did not give a full name wrote, "I absolutely loathe the 'Divided States' pieces on Morning Edition. I do not tune in to listen to people argue about Trump vs. Clinton. It's already patently clear that we are a divided nation — what purpose do these reoccurring features serve? None. They remind me of cable news pundits arguing. Again, this is not what I tune into NPR to hear!!"

Mary Sanders, from Boerne, Texas, wrote that she is "concerned with the amount of time given to interviewing 'average' people about their views about the presidential candidates. While I appreciate hearing different perspectives as a way to understand why people are leaning towards one candidate or another, these perspectives also carry a good amount of bias. I feel like this campaign is full of spin and opinion, and there is proportionately much less perspective or analysis of the candidates' policies and their implications than there used to be — in all media, but now, too, on NPR. Nationwide, there is a dearth of this focus on policies, and the views of individuals on what they think the candidates' positions are is beginning to blur what the real positions are. I count on NPR and Morning Edition to give me analysis so I can make sound decisions."

Other writers detailed specifics of interviews in which the voters shared incorrect information in explaining why they supported one candidate over the others, with minimal pushback from the NPR interviewer. "I understand that this series is about letting individuals speak their views in an unfiltered manner," wrote Daniel Balestrini, who said he lives in Germany, of one interview. But if guests make statements that misrepresent facts, he wrote, the hosts should be very direct in correcting them.

Schumacher-Matos discussed the history of the interviews and the value that newsroom employees place on them. I won't go back over the territory he covered, but I'd urge anyone interested in the genre to read his column, because the debate has not changed much. Those who like the interviews feel they add a human element to policy discussions. Voters will be making the decisions at the polls, so it's important to hear directly from them. The counterargument is that those interviewed, as the emailers note, are not always correctly informed. The time spent talking to them could be given over to policy discussions.

One thing has changed a bit this election cycle, and that is the role that Facebook plays in many people's lives. I'm sure I'm not alone in seeing a Facebook feed filled with personal opinions about the candidates, the equivalent of the interviews Morning Edition has been running. Still, I personally find value in hearing how voters have processed the messages put out by the campaigns. Yes, as Sanders argues, some of the voters interviewed were merely channeling talking points, but others had come to thoughtful, complicated calculations about their votes that I found insightful.

Sarah Gilbert, the executive producer of Morning Edition, touted the value of polite discourse found in the interviews. I asked her how the voters were selected. "Clearly, a scientific survey just isn't possible with 16 voters over four debates in four different states, so instead we went for a balance of voters (two Republican, two Democrat in every show) who could shed some light on how they, as individuals with unique life experiences, had come to the decisions they had this election season," she said by email.

Regarding fact-checking, she wrote, "All participants are entitled to their points of view, and we set out to respect the diversity of perspectives and motivations of each person as we spoke with them: none is alone in what they believe and what they feel and all expressed views which are resonant at this moment in time. The aim of this was to gain some insight into how people are thinking and feeling this fall, not to fact check them. We think our audience realizes that."

She and I disagree here; I believe misinformation should be corrected, if not within the actual interview (which is sometimes awkward, since no one really wants to hear a host arguing with a guest), then in an afterword, or, at a minimum, online.

On to the continued tracking of campaign coverage that my office has been doing, in response to listener requests.

In the tracking period from Oct. 9 through Oct. 22, my office looked at 223 Morning Edition, All Things Considered, their weekend counterparts, and online-only stories about the election. The tracking does not include newscasts, Here & Now, or the NPR Politics Podcast (which, as an aside, has started cranking out daily episodes that will run through the election), nor does it include the special coverage that aired around the debates. It does include the newsroom's monumental fact-checking and annotating efforts from the second and third presidential debates, which highlighted where the candidates stand on issues such as the Supreme Court, the economy, the war in Syria and the Affordable Care Act.

More than half of those stories — 120 — covered the election in general, either looking at multiple candidates, the debates or trends. When it came to individual candidate coverage, there were 76 stories about Republican candidate Donald Trump and 25 stories about Democratic candidate Hillary Clinton; that's about a third of the overall coverage.

That imbalance in the individual candidate stories, with the over-emphasis on Trump, is, to put it simply, driving some listeners nuts. In the newsroom's defense, the tracking period included the week in which a number of women alleged that Trump had groped or sexually assaulted them, charges that he has categorically denied, so it's not surprising that more attention was paid to him.

This period saw two stories focused on independent conservative candidate Evan McMullin as he rose in the polls in Utah. There was no coverage focused solely on Green Party candidate Jill Stein or Libertarian candidate Gary Johnson, though they were mentioned in several of the general election stories.

Only a handful of the stories published during this tracking period delved into policy platforms, but they were substantive pieces. The newsroom reported on Trump and Clinton's stances on tackling poverty, Russia, immigration (here and here) and energy and climate change, as well as the issues looked at in the debate fact-checking.