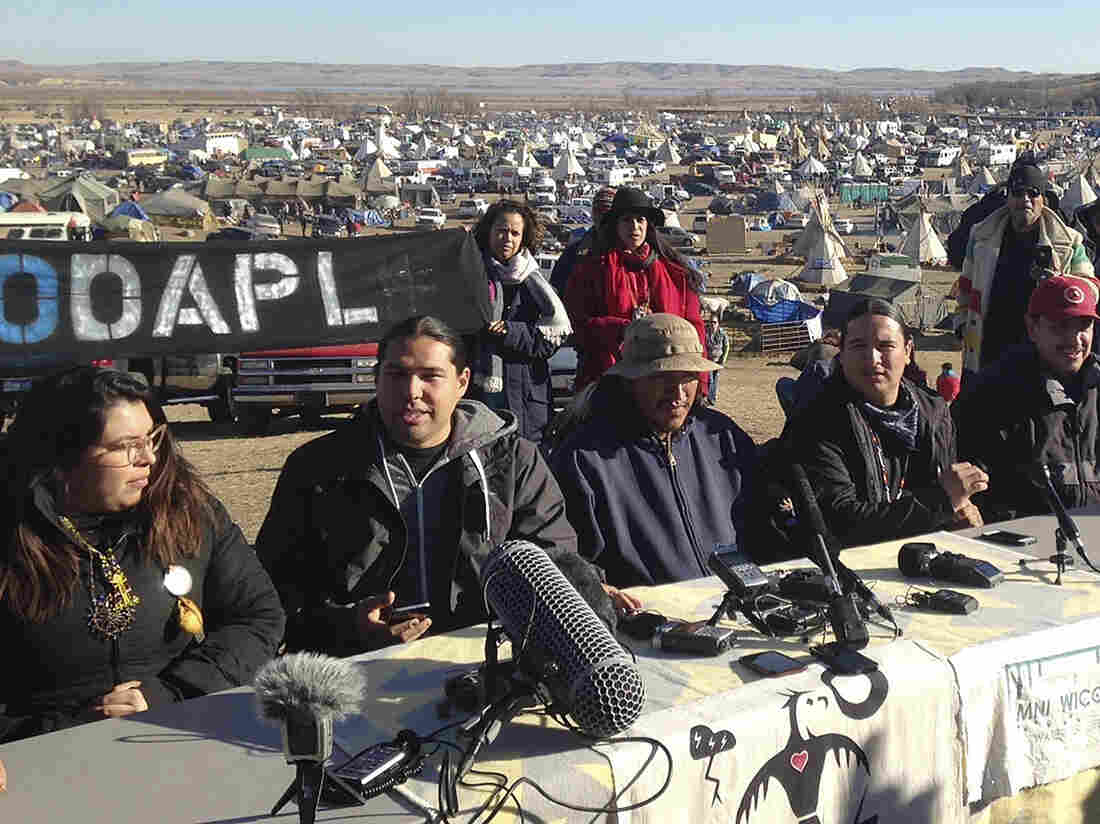 In this Nov. 26, 2016 photo, organizers of protests against construction of the Dakota Access oil pipeline speak at a news conference near Cannon Ball, N.D. James MacPherson/AP hide caption 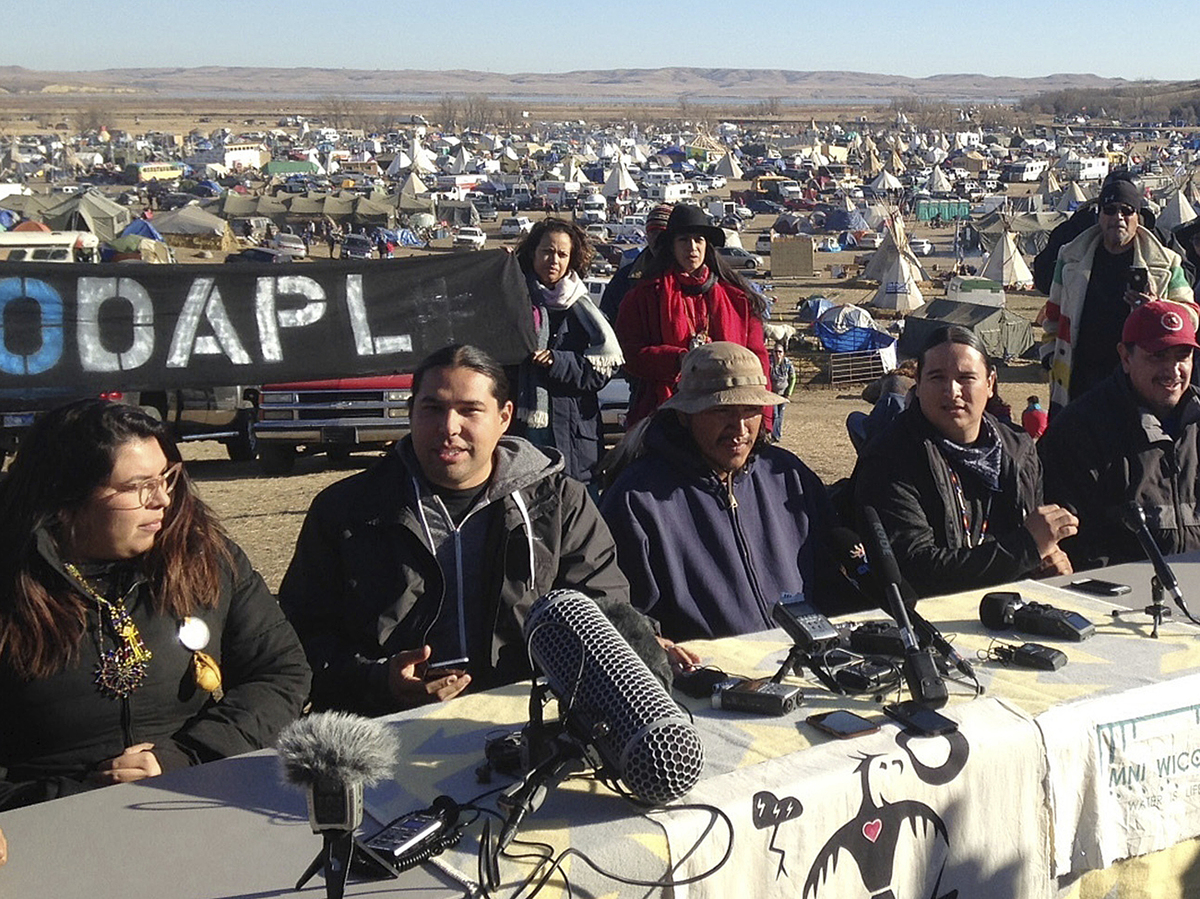 In this Nov. 26, 2016 photo, organizers of protests against construction of the Dakota Access oil pipeline speak at a news conference near Cannon Ball, N.D.

By any measure, the story that has been unfolding in North Dakota along the proposed route of the Dakota Access Pipeline since April is extraordinary. Thousands of people led by the Standing Rock Sioux Tribe have gathered for months in largely peaceful protest against the $3.8 billion oil pipeline's route, arguing that it infringes on tribal lands and could put at risk their water supply, and that the tribe was not properly consulted in the planning process.

The number of people drawn to camp out for extended periods near rural Cannon Ball, on the Standing Rock Sioux Reservation, is just one small aspect of the story. The standoff, however it turns out, will almost certainly be judged as a seminal moment in the long history of relations between the native peoples of the Americas and the United States government. And, as Jeff Brady, the NPR correspondent who has spent the most time on-site, told me, the protests also represent an important element in the broader story of environmentalists' campaigns to block fossil fuel infrastructure projects. The combination of factors makes it a much bigger story than it might be if only one of the factors was involved.

Brady, who is based in Philadelphia, has visited the site twice for multiday reporting trips, and told me he would have wanted to spend more time if not for other obligations. Nathan Rott, a national reporter based in NPR's Culver City, Calif., bureau, is headed to the site this weekend. Locally based reporters, including Amy Sisk from Prairie Public Broadcasting and the Inside Energy reporting project, and Minnesota Public Radio's Doualy Xaykaothao, have also filed reports in between staff visits.

Overall, NPR has done about 50 stories so far on the protests, either on-air during the newsmagazines or online. That does not include many newscast reports, or a handful of reports on the midday Here & Now, and a couple of Facebook Live conversations (although the Facebook reports were not live from the scene, which I think viewers would have appreciated). The Diane Rehm Show and On Point (shows that NPR distributes but does not produce) devoted episodes to the topic. Leah Donnella of NPR's race and identity blog, Code Switch, has weighed in here and with this historical perspective; NPR Music featured Neil Young's song supporting the protesters. On Thanksgiving Day, All Things Considered broadcast a commentary from Tanaya Winder, a poet and storyteller who is a member of the Duckwater Shoshone Tribe.

(For those who argue to my office that NPR devoted more attention to the armed takeover of the Malheur National Wildlife Refuge in Oregon, here are the numbers: 65 NPR newsmagazine or online stories on that topic between Jan. 3 and Nov. 8, which included the five-week standoff itself and the recent trial. Standing Rock coverage will almost certainly surpass that, as is appropriate, given the magnitude of the story.)

(I'd also note that On The Media and The Takeaway have covered the pipeline protests and media coverage of them; those shows air on public radio stations but are not produced by NPR. Inside Energy, a public media collaborative funded by the Corporation for Public Broadcasting, has also looked at the issues in depth, including a good piece on the safety of pipelines.)

Still, a steady stream of listeners on the side of the protesters has contacted the Ombudsman's office to say they believe NPR is underplaying or altogether ignoring Standing Rock. (We have heard from only a couple pro-pipeline listeners who believe the coverage has been overdone.)

On top of social media outreach, some 135 emails in the last 90 days have come into the office, a few of them from an organized write-in campaign (of unknown origin) requesting that NPR devote more attention to the topic.

Karen Josephson of Corvallis, Ore., wrote: "Please do more coverage of the Water Protectors — the thousands of natives and whites who are standing in solidarity at the Dakota Access Pipeline project in North Dakota. This has national as well as local interest and support. It is related to multiple issues — climate, treatment of native tribes, water, rivers, the future, our uses of fossil fuels, tribal lands, U.S. Treaty Agreements with natives, etc. Do not depict them as protesters; they are protectors. Note the difference in their approach — protection of water which is becoming a huge concern everywhere."

Many of the emails have protested that NPR has downplayed the police actions. Phillip Knoll, of Chicago, wrote: "I am writing with concerns about the framing being presented in coverage of the Dakota Access Pipeline protests. In recent days the use of excessive police force has continued against a group of non violent protesters, including the use of freezing water and concussion grenades resulting in hypothermia and severe injuries to the citizens protesting this action. Being that the protesters are non violent and unarmed, this does not in any way constitute a parity or equality of presumed threat to life or safety of the officers involved. There is clearly a disproportionate response by police and security forces, as has been the case for months. Nonetheless, NPR's website editors perplexingly choose to employ terms like 'Police & Protestors Clash' and cites unfounded official narratives in justifying this false equality."

And this from Angela DeWitt, of Boonville, Calif.: "I'm concerned about the Dakota Access Pipeline reporting that I heard this morning on Morning Edition. Not only do I know several people who are there but I watched via Facebook live stream for most of the night. I was riveted and horrified by what I was seeing: a heavily armed law enforcement blockade using force out of all proportion to the actions of the protesters. I understand and appreciate the need for balanced journalism, but you greatly underrepresented the physical horrors that the protesters were experiencing at the hands of law enforcement. The use of water cannons in freezing temperatures is unconscionable."

DeWitt's email highlights one of the unusual aspects of this story: Those who are particularly interested in it can tap into the frequent live streams on Facebook, no media filter needed (although the Facebook feeds are most certainly filtered, coming from the protesters' point of view). That may magnify their impression that the story is not being given sufficient attention.

The protesters and the law enforcement agencies on the scene have offered wildly differing views of events, including those of the early morning of Nov. 21, when an explosive seriously injured a woman's arm. But video from the scene has been used by some news outlets such as Democracy Now and the Guardian U.S. to challenge some of the official statements from law enforcement; as the Guardian wrote, "When asked about the water cannons, a sheriff's spokeswoman initially told the Guardian that protesters were 'starting fires.' But footage later emerged showing police aiming the hoses directly at activists. The department subsequently conceded that it had purposefully used water on the protesters."

Reporter Renée Jean of the Williston (N.D.) Herald has also documented the challenges, which are not insignificant, faced by journalists seeking to cover the protesters' side of the story. (And the logistics alone, Brady told me, have occasionally been daunting. On his first trip, even standing on top of a rented Jeep, he could not get a satellite phone signal in order to do a live conversation with an NPR studio host.)

I asked the NPR newsroom for their thoughts on the story and the coverage they have given it so far. Brady told me before the election that, "if the news cycle were different" more stories would likely have made it on the air. But, he said, "Those are the decisions we make."

Catherine Laidlaw, the editor overseeing the Two-Way, NPR's online breaking news blog, told me by email, "It's an important story" that is being monitored for significant developments. And Vickie Walton-James, NPR's senior national editor, said Standing Rock is like many ongoing stories: "We cover them with a combination of breaking news and features, and that doesn't translate into a story every day." NPR, she said, has sent staff members and partnered with member station reporters to keep on top of the story, but a daily story "would pull us into the territory of incremental coverage."

I mostly agree with the newsroom. The story is not an easy one to cover, given the remoteness of the site. NPR was not there as early as it could have been, but once it began paying attention, NPR devoted more time and resources than many other major news outlets. That may be why some listeners are writing now to say the story has been underplayed. The importance of what is taking place would seem to warrant a story almost every day and yet, given the incremental nature of the developments, it's not clear to me what those stories would report, without sounding repetitive.

Walton-James said that over the months NPR has explored most of the major themes, and I would agree. That coverage has been thoughtful, including a Weekend All Things Considered interview with the tribe's chair that ran in September. Brady's reports from September and November, with evocative photos, have captured the spirit of the tribes' efforts and the perspective of those who have joined them. Most recently, I appreciated this nuanced piece from Sisk on the complicated relationship other tribes have with oil pipelines that run under their lands.

NPR has also been mostly on top of the legal back and forth and the official pronouncements, such as the arrival of thousands of veterans this weekend following an Army Corps of Engineers directive to dismantle the camps by Dec. 5.

I acknowledge that may not be enough for the advocates who have contacted my office. But when I look at the daily developments, as chronicled in detail by Prairie Public Broadcasting and local newspapers including the Bismarck Tribune, I haven't found many stories recently that would necessarily warrant taking the focus off NPR's current heavy attention on the aftermath of the Presidential election, including the Cabinet and staff picks and the swirling questions over president-elect Donald Trump's conflicts of interest.

There is one angle of the story that I do think NPR has underplayed: the questions surrounding law enforcement's use of force against the protesters. Other news outlets have probed that topic much more deeply, and it is an issue that I believe NPR could have looked at (and still can look at) in much more depth.

Walton-James told me the newsroom has indeed attempted to get at that angle and will continue to focus reporting efforts on it. "We have certainly covered the protesters' allegations," she said, and tried to get the law enforcement side of that story. "We'll certainly run at that again," she said.

For NPR, which has faced complaints in the past that it is too focused on official Washington, I do think the Standing Rock story is critically important. I hope and expect it will continue to stay on the story. Just this afternoon, All Things Considered posted a call-out on Facebook asking what questions NPR's listeners and readers want answered, with a promise to look into them. The numerous replies so far show that there is indeed a deep desire for more in-depth information on the story.