Accessibility links
Are NPR Listeners And Readers Entitled To A Different Word? : NPR Public Editor As news about entitlement programs trends, we're hearing more about whether that's a good word for them.

Are NPR Listeners And Readers Entitled To A Different Word?

Are NPR Listeners And Readers Entitled To A Different Word? 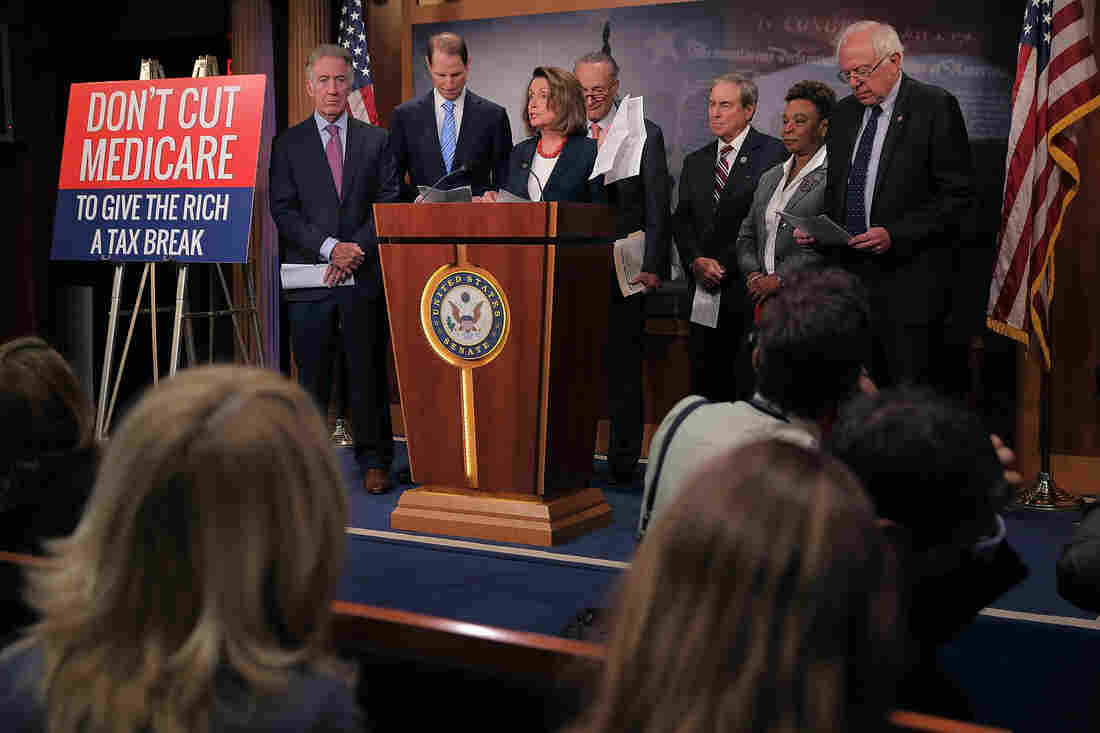 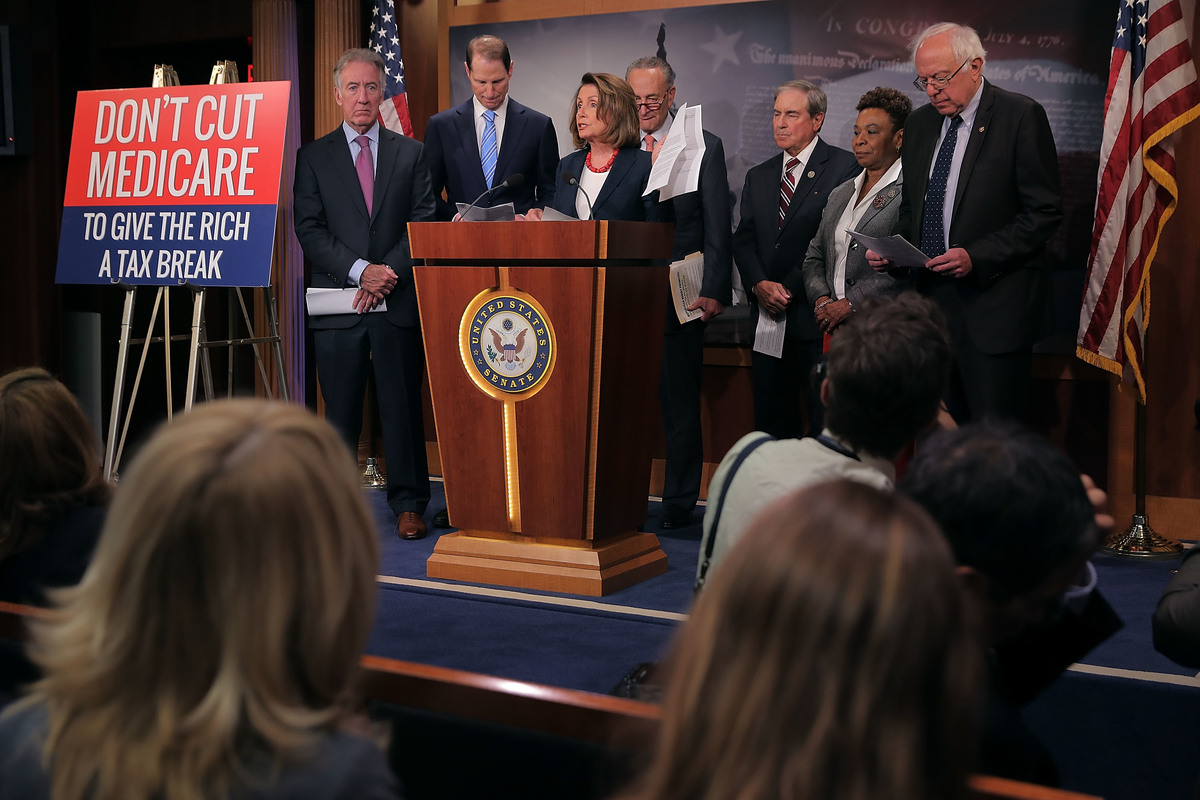 Congressional Democrats, including House Minority Leader Nancy Pelosi (D-CA) and Senate Minority Leader Chuck Schumer (D-NY), and Sen. Bernie Sanders (I-VT) hold a news conference critical of the Republican tax and budget plan at the U.S. Capitol Oct. 4, 2017 in which they called on President Trump to keep his campaign promises to not cut entitlement programs like Social Security and Medicaid.

Social Security, Medicare and Medicaid benefits are back in the news, so complaints about NPR's use of the word "entitlements" to describe them are back on the rise.

This is an old debate. My predecessor wrote about similar complaints in 2011. The New York Times public editor tackled the issue in 2013, at about the time a number of other publications took on the issue, as well.

In a recent email, Mary Kilgore, of Monona, Wis., wrote that Social Security and Medicare "are NOT entitlements. They are insurance programs that working people pay into for years. For a visual, check your pay stub!"

Her plea, similar to others, joins the chorus of requests to NPR that swirl around all sorts of other words that have become politicized, from "Obamacare" (used by some on the right to cast aspersions on the Affordable Care Act) to "undocumented" (used by some, often on the left, as a more sympathetic way to refer to immigrants who are in the country illegally). But this one is a little more complicated than most.

Hendrik Hertzberg, writing in The New Yorker in 2013, chronicled how the word crept into the public policy lexicon from the mid-1970s on. "The first official use of 'entitlements' in its current sense came during the Nixon Administration, when the 1974 budget act defined it as 'payments to persons or governments who meet the requirements established by laws'," he wrote.

President Ronald Reagan's subsequent use of the term, perhaps to avoid controversy when talking about changes to Social Security, led to its increasing adoption in federal budget discussions.

In current-day usage, the word conjures up many conflicting meanings, complicating the debate.

Officially, to entitle someone, Webster's New World College Dictionary (5th Edition) tells us, is to "give a right or legal title to; qualify (a person) to something." Those 62 and over who have worked for a certain number of years and have paid taxes into the Social Security system are indeed entitled to Social Security, as are those who have paid taxes for Medicare, for example.

Additionally, Webster's (NPR's dictionary of record) defines "entitlement" as "1) the condition or state of being entitled; 2) something to which a person is entitled; specif., any of various benefits provided to qualifying persons under certain government programs, as Medicare."

"A Federal program or provision of law that requires payments to any person or unit of government that meets the eligibility criteria established by law. Entitlements constitute a binding obligation on the part of the Federal Government, and eligible recipients have legal recourse if the obligation is not fulfilled. Social Security and veterans' compensation and pensions are examples of entitlement programs."

Mark Memmott, NPR's standards and practices editor, pointed to these definitions in arguing that NPR is right to keep using the word.

But the word also has conflicting negative usages. And they cut both ways. In recent years, conservatives who want to cut back on a broad range of social programs have adopted "entitlements" as something of an epithet. Calling someone entitled, in some usages, is to imply they feel deserving of something that is, in fact, undeserved. That's the meaning to which many of those who have contacted NPR object. They feel as though they have been required to pay for their benefits, but now are being painted as freeloaders.

Alternatively, as Robert J. Samuelson wrote in The Washington Post, "Political leaders' casual references to entitlements encourage people to think benefit programs are legally untouchable, at least in the sense of cuts." The word was recently on a list of terms that Centers for Disease Control and Prevention officials were told not to use in budget documents, The Washington Post reported (the Department of Health and Human Services called the report a "complete mischaracterization.")

What strikes me is that almost all of the articles and critiques of the word conclude that there are far better ways to refer to the programs. Among the alternatives to "entitlements" proposed over the years: "earned benefits" or "social insurance" or "federal retirement benefits."

Not all of these alternatives apply to all "entitlement" programs. The word is often used as shorthand for the largest programs, Social Security, Medicare and Medicaid, but there are other programs that are also in the category, such as Supplemental Security Income assisting those who are blind, disabled or 65 and older with low income. And in any case, none of the suggested alternatives rolls as easily off the tongue as "entitlements."

That may be why NPR staff used the term "entitlements" (or its singular) 77 times in the morning and evening newsmagazines or online articles from Jan. 1, 2017, through Jan. 8, 2018. Counting its use in quotes, and guests who used it, the word was heard in 106 stories in that time period.

Another good option would be to just use the names of the specific programs being discussed, as Michael de Yoanna, news director at member station KUNC in Greeley, Colo., has instructed his staff, after a listener complaint (about a promotional spot that used the word). Many of the NPR pieces that we looked at do indeed identify the programs being discussed, as well as using the broader term.

But it takes more time to constantly spell out the programs, and, as the staff on the radio side of NPR's operations are always reminding me, time is a precious commodity and there's never enough of it.

Memmott said that, while NPR will keep in mind the argument that the word has become overly politicized, "clarity" is a key factor when it comes to NPR's language issues "and we do believe the term is what many in the audience will understand." I'd argue that, while clarity is important, it's not the only consideration in using language that itself has become entangled in the nation's currently polarized debates. Instead, it's time to scale back on the use of this complicated word, or at least spell out more clearly the nature of what's being discussed.