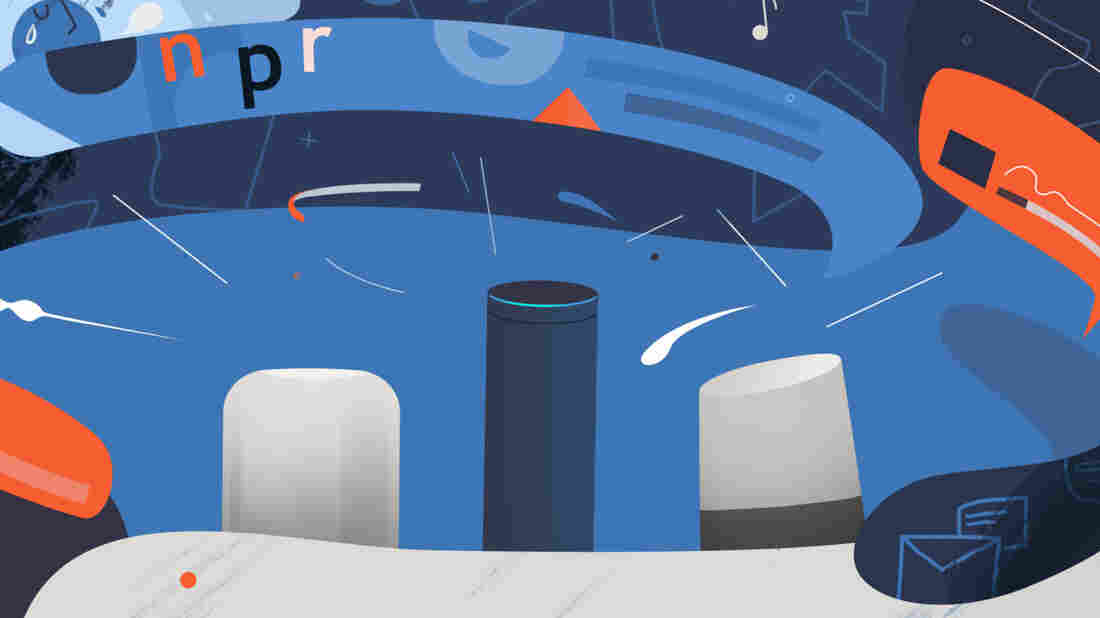 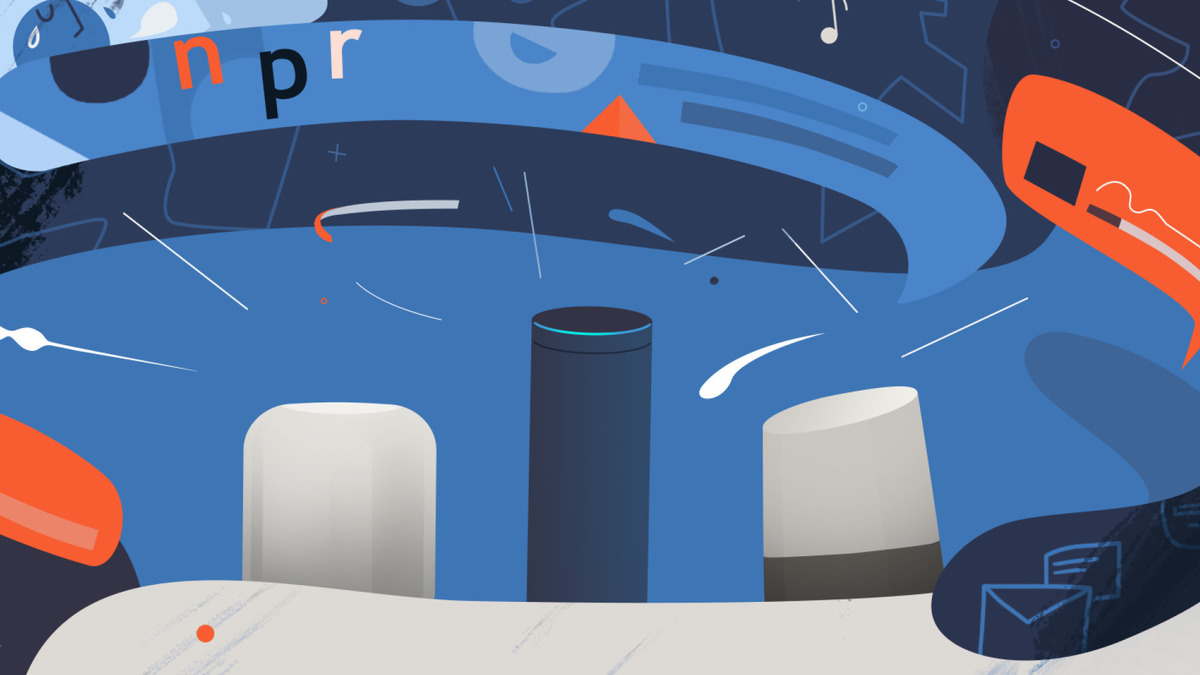 In recent weeks, many listeners have noticed something new: NPR hosts urging them to tell their smart speaker to play NPR. It's a sign that NPR is now available and prominently featured as a leading news source on Amazon's Alexa, Apple's HomePod, Samsung's Bixby, Microsoft's Cortana, and Google Home. But the messages have confused some listeners and raised concerns from others about why NPR is seemingly promoting the technology, and whether it is being paid to do so.

According to a recent NPR/Edison Research Smart Audio Report, 16 percent of Americans over age 18 own a smart speaker (that's about 39 million people). Of those owners, 71 percent are listening to more audio since getting a smart speaker. For many, the smart speaker is replacing their terrestrial radio set, and NPR and member stations have noticed.

"Everyone has smart speaker fever," said Chief Digital Officer Thomas Hjelm. "[We're] very eager for NPR in particular, but public radio in general, to take a leadership position and to be as accessible as possible." To paraphrase NPR's approach to digital innovation: Radio isn't going away, it's going everywhere. So it seems only natural that NPR audio content is now available on those platforms.

But the tune-in messages have generated more than a dozen emails to the Ombudsman's Office inbox. Listeners' concerns mostly fall into two categories: Why NPR is promoting this new technology, and security worries.

Listener Timothy Berg of Muncie, Ind., was one of several who wrote in to ask: "Why, in several shows I've heard, including [All Things Considered] and Weekend ATC, are there exhortations to listen by asking your smart speaker to play NPR. Why are you giving free advertising to the companies who make these devices? Even without mentioning any of the makers or sellers of these devices you're promoting the product. If NPR is getting paid to say this, you should make it clear this is so."

NPR is not being paid to run the promotions. Michael Lutzky, NPR's vice president of business development, whose role is to "forge new partnerships to position NPR for long-term success," including building relationships with those technology companies, told me that the intent of the "spots" is to let listeners know that NPR's content is available on these new platforms. "There is no financial or contractual relationship that dictates what we say about NPR being available on smart speakers," he said.

Lutzky added, "If [Amazon] or Google's marketing teams want to get a message through to our listeners they would go through the sponsorship and underwriting process just like everyone else." But in this case, "There is no quid pro quo or exchange of service for airtime."

Listeners might notice that these smart speaker "spots" are read by show hosts, rather than the voices of NPR underwriting – Jessica Hansen and Chioke I'Anson – just one way NPR signals that this is coming from NPR, not a corporate sponsor.

Another way NPR is trying to avoid the appearance of pay-for-play and encompass all platforms is by keeping the vocal prompt generic; listeners still need to know how to get their devices to respond ("Alexa, play NPR," or "Ok Google, play NPR," for example).

Still, I can understand how listeners might be confused – the messages do sound oddly promotional. One news executive I spoke with compared this call to action to the way NPR publicizes NPR One, an app to stream content from NPR, which is primarily designed to be used on smartphones. These spots, too, are promoting NPR's content, on another platform. But I'm not totally convinced by that comparison, perhaps because smart speakers are still a nascent technology. As smart speakers become more ubiquitous, perhaps listeners will feel more comfortable with them.

One listener questioned why NPR needed the spots since "it seems that people who are early adopters like this are technically proficient enough to figure out how to use smart speakers."

The Edison Research, however, suggests that the majority of smart speaker users do not know the full extent of their devices' capabilities.

Joel Sucherman, NPR's senior director for digital products, explains, "There are no clear guides for smart speakers and we're finding that people don't quite know what to do with them. Many people are using them as their new radios in their homes." The goal of these radio spots, he added, is to tell listeners, "You can find public radio content and your local station stream there." It's "not a suggestion that you should buy one or that you need to [listen] this way. The same content is available on the radio and will always be."

Other listeners wrote to express concerns about their personal security. As Mary Applegate of Bethlehem, N.Y., wrote, "I've been concerned in recent days hearing several NPR announcers urging listeners to visit npr.org or to tell their 'smart speakers' to tune in to NPR. This tacit endorsement of such devices is irresponsible; it encourages people to adopt a product that can compromise their personal privacy by collecting extensive data about the user. NPR needs to provide thoughtful discussion about the pros and cons of 'smart speakers' instead of uncritically promoting their use."

Her note brings up two points of concern: the personal security of NPR listeners, and the newsroom's editorial coverage of smart technology more generally. Sucherman assured me that "companies are not turning over any data to us. The only thing that we are aware of is the aggregate numbers of folks that are using [smart speakers]. We do not know who is listening."

More generally, Hjelm said, "Every new technology generates new security concerns. We have to be careful about security to our websites, to our apps ... so, sure, this new frontier will probably produce new levels of caution, but we're certainly not there yet. It is absolutely not the case that NPR is collecting any personal data beyond listening streams," (i.e., how many people are listening). That does not mean that NPR can vouch for anything that those technology companies may or may not be doing with any data collected by the smart speakers.

Applegate's note also touches on another issue: whether the partnerships are affecting the newsroom's coverage of those tech companies. As far as I can tell, NPR has pulled no punches.

"We'll cover the story the way the story needs to be covered," said NPR Standards and Practices Editor Mark Memmott. "If problems come up with smart speakers, we'll do those stories." Indeed, the newsroom has covered some of the legal and ethical consequences that come with owning smart technology. These concerns have been around for a while and NPR covered them early on. More recently, the newsroom has covered some of the adjacent story threads, like how companies can better protect consumer privacy, troubling glitches in the systems, or what happens in a house fully connected by "smart" tech.

It has yet to encounter how to handle what would be the appearance of a conflict of interest in which a host might have to interview a representative from one of those tech companies.

Memmott was involved in the conversations to determine what exactly the hosts would say on air when asking listeners to tune in using the new speakers, but the newsroom is otherwise "blissfully ignorant" of decisions made by the business side, he said.

Lutzky added that NPR has "turned down business deals" in which the companies expect some measure of influence over content decisions. "We don't cede editorial control to anybody," he said.

It's comforting to hear that the oft-cited "firewall" between the newsroom and the rest of NPR remains intact as the company explores opportunities on emerging platforms. We will continue to monitor the ethical implications and the editorial coverage of these smart speakers as new challenges arise.