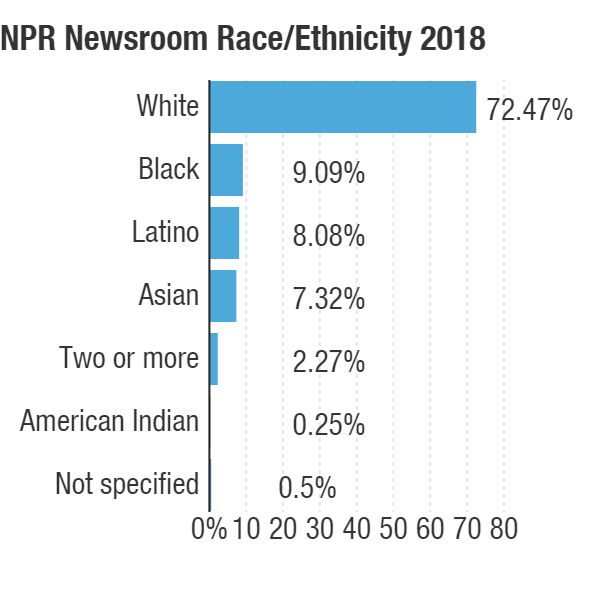 The NPR newsroom breakdown by race and ethnicity as of Oct. 31, 2018. NPR hide caption

Having a diverse newsroom is crucial if NPR wants to tell stories that matter to an increasingly diverse country. For that reason, in each year of my tenure I have requested the newsroom staff diversity statistics from NPR's human resources department. Numbers don't tell the whole story, of course, but they offer one way to keep NPR's progress (or lack of significant progress in recent years) front and center.

For 2018, there's modest change to report when it comes to the race and ethnicity breakdown of NPR's newsroom staff. As of Oct. 31, the NPR news and information division of 396 people (19 more than a year ago) included 27 percent people of color, up from 25 percent last year. That small bit of growth was primarily the result of an uptick in the percent of newsroom employees who self-identify as Latino or Hispanic.

Latinx employees now make up 8 percent of the newsroom staff. Keith Woods, NPR's vice president of newsroom training and diversity, said that is more than double the percentage from five years ago. But, he noted, it's also less than half the percentage of the U.S. Latinx population. NPR has a ways to go.

How does NPR compare to other newsrooms? A just-published special report by the Columbia Journalism Review includes a look at the race and ethnicity breakdowns in a broad range of newsrooms. Pew Research Center also just released a new study of newsroom diversity.

Meanwhile, the gender breakdown of NPR's newsroom as of Oct. 31 showed an increase in the percentage of female employees. As of that date, just over 57 percent of newsroom employees were female, up from just over 56 percent last year. Of the 227 female employees, 156 were white (the largest demographic group in the newsroom).

One point: The numbers we post are the categories that NPR collects (and it should be noted that two employees chose not to specify their race or ethnicity). 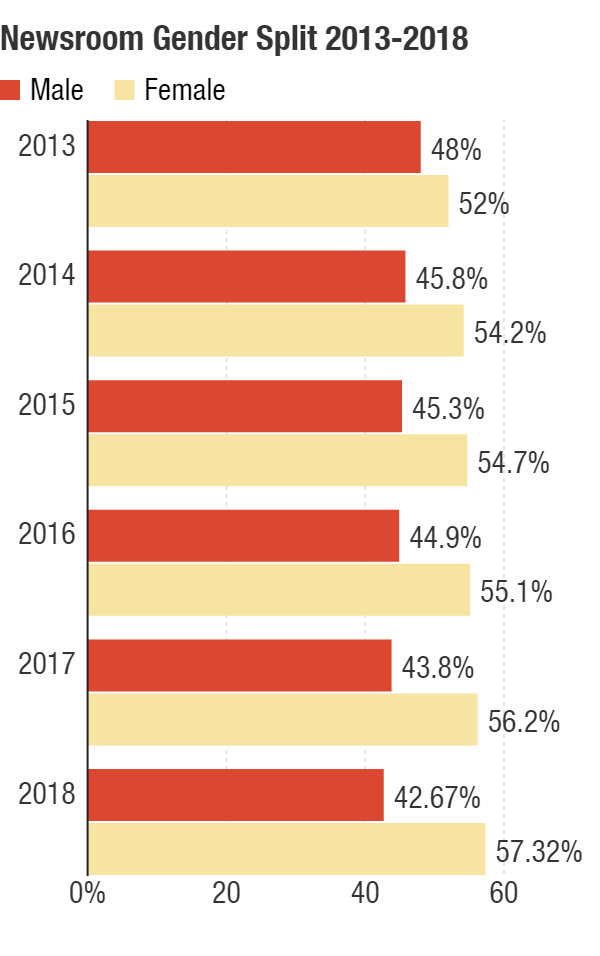 Christopher Turpin, NPR's acting news chief, who is about to move into a new role as vice president for editorial innovation and newsroom development, told me by email, "It is gratifying that the trend lines are moving in the right direction, but let's not kid ourselves that there isn't a huge amount of work to be done."

He added, "In previous years I've been especially critical about our lack of progress in hiring Latinos, so it's gratifying to see some significant improvement there. Now the challenge is making sure that people of color joining NPR see a future here where they can imagine moving into editorial leadership positions or covering a major reporting beat. This means investing in career development — making sure that folks get the skills and experience they need to grow — and being very intentional in how we mentor and develop talent."

Woods highlighted a couple of developments in the past year that are not reflected in the overall numbers. With an expansion in February, five of NPR's 11 newsmagazine hosts are people of color, and seven are women.

By his count, newsroom leaders are also more diverse (by race and ethnicity, and gender) than the overall newsroom. He identified 35 people who supervise a reporting desk (such as the national and international desks), oversee a newsmagazine, or are in what he called "gatekeeper" roles from the very top (the incoming chief news executive Nancy Barnes) down through deputy managing editors, regional bureau chiefs and other content decision makers. Within those groups, 14 people, or 40 percent, are people of color, and 63 percent are women.

That said, there are some glaring holes: there are no Native Americans, no Asian men and just one Latino man in that cohort of newsroom leaders who oversee from the top what the audience hears and reads. (There is, however, at least one top NPR leader who brings a native identity and perspective; Sara Kehaulani Goo, the NPR managing editor overseeing digital content and strategy, identifies as part Native Hawaiian.)

Woods told me: "The overall numbers for newsroom leaders are really good unless you're a Native American, an Asian man or a Latino man and then you see how hard it is to declare victory just because we have a higher percentage of people of color in the newsroom. There are holes in our diversity and they're meaningful when it comes to everything from overall coverage to individual sources."

How do diverse newsrooms affect coverage? People from diverse backgrounds have differing perspectives on the world and are thus more likely to recognize and advocate for reporting that covers a wide range of views. That, in turn, is an important element in fostering trust in media: why would people trust news sources where they don't see themselves and stories that matter to them reflected? For more on this and for some thoughts from the newsroom, see this column from 2016.

As Woods said, to best reflect America in their reporting, newsrooms also need to talk to a wide range of voices, as well as hire diverse reporters and editors. Those issues are often closely linked. NPR's tracking of its sources over several years has documented that they are overwhelmingly white, male and based on the East and West Coasts. But when it comes to using Latinx sources, in particular, it is Latinx reporters who seek them out.

My office explored these questions of NPR's unacceptable source diversity earlier this year, in a column about the makeup of NPR's digital sources and one about internal initiatives to boost the numbers on air and online.

On Thursday, Woods announced an official initiative meant address this issue. NPR has created what it's calling the Reflect America Fellowship, whose occupant will spend 18 months working with a succession of newsroom teams to increase the number of sources who are people of color and white females.

As critics, including some in the NPR newsroom, rightly pointed out when the fellowship was announced, diverse sourcing should be the role of everyone in the newsroom, not the job of one person. There are certainly best practices in this area that can be taught and shared. But I would hope that it doesn't take 18 months for the practice of reaching out to a wide variety of sources to become ingrained in the work of all those responsible.

Annie Johnson contributed to this report.

This post has been updated to note that NPR has one newsroom leader who identifies as part Native Hawaiian.