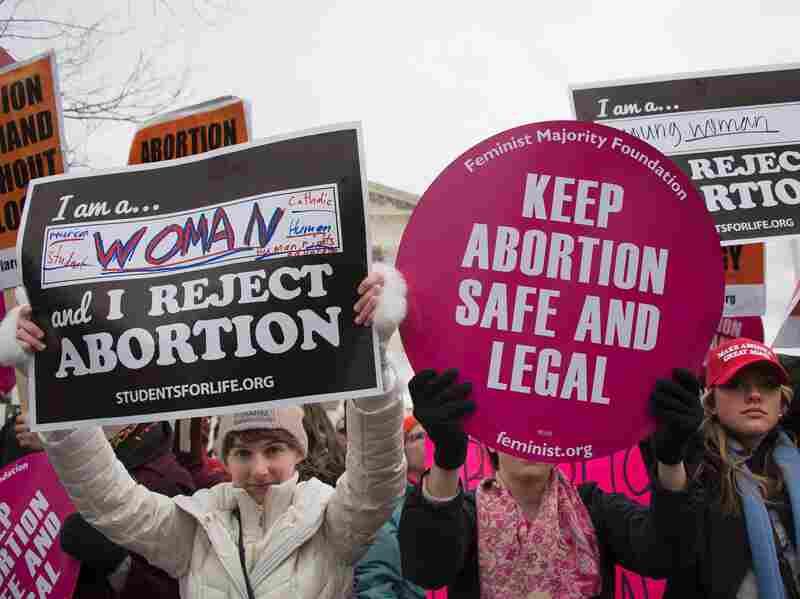 Protesters demonstrate in front of the US Supreme Court during the March For Life in Washington, DC, January 27, 2017. Jim Watson/AFP/Getty Images hide caption 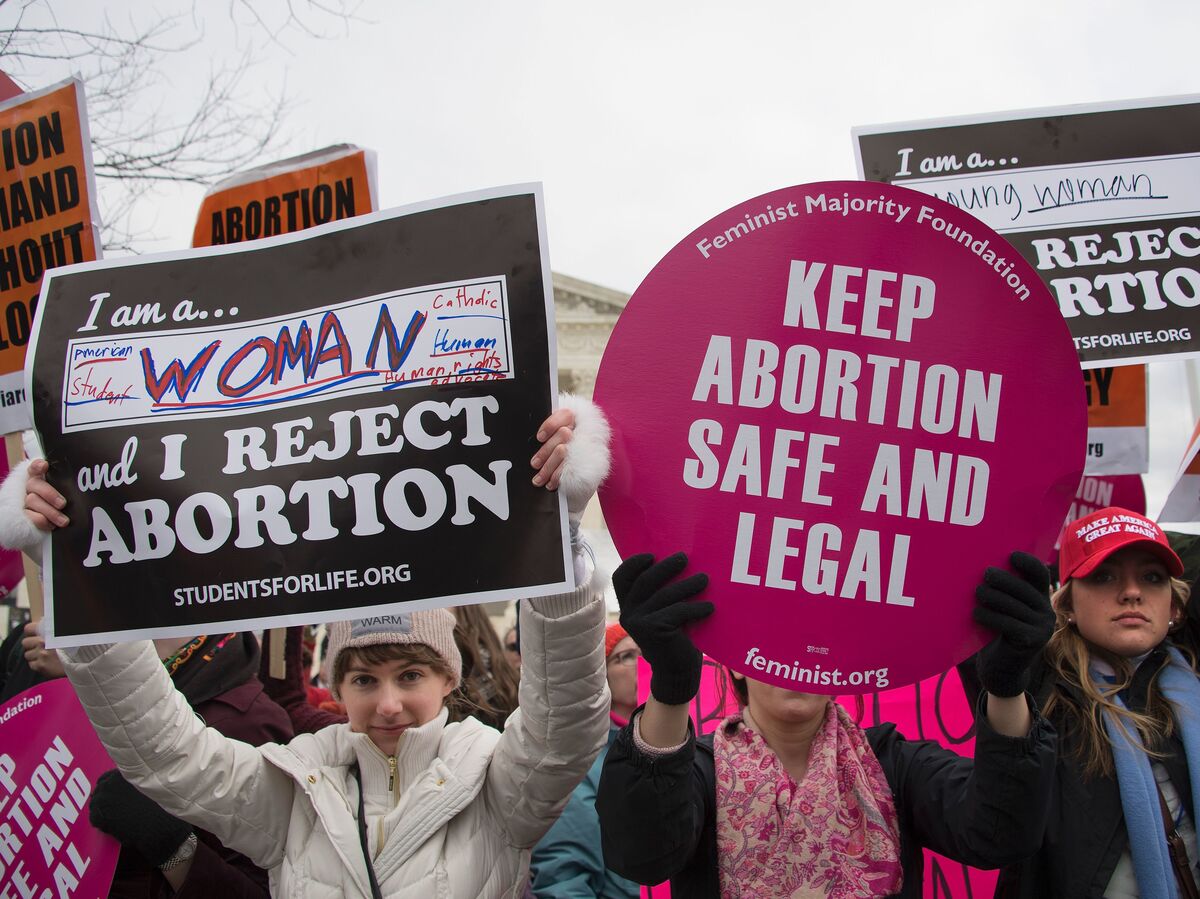 Protesters demonstrate in front of the US Supreme Court during the March For Life in Washington, DC, January 27, 2017.

The debate over abortion rights is emotionally charged. The language NPR uses to discuss the issue should not add to the drama.

This principle applies, of course, to any number of topics in the news that NPR covers. But the legal battle over the right to an abortion is particularly fraught, and the language used to discuss it has become a key tactical weapon used by both sides as they seek to tap into those emotions.

For months we have heard concerns from NPR listeners and readers on both sides of the issue, and they continue to come in as the legislative and legal challenges to abortion are in the news. The complaints are flip sides of a coin. We get complaints that NPR is using the language of "the other side" (whatever the other side is, depending on the affiliation of the letter writer) and thus giving the other side an advantage. An example: a recent letter from a New Hampshire listener noted that NPR had referred to pregnant women as mothers. He called that "a politically loaded term, since a pregnant woman is not a mother until she gives birth."

Conversely, we get complaints that NPR is not using the emotionally charged language that proponents of one side or the other prefer. The main example: We regularly hear from those who say they are "pro-life" and wonder why NPR won't give them the respect of calling them by their preferred label (NPR's policy is not to use "pro-life" or "pro-choice;" more on that below). Some on this side argue that it's not just a matter of respect; that by taking the emotion out of the debate it's also taking the side of those who favor legalized abortion.

What follows is an explanation of what NPR's policy is and the thinking behind it, along with a few thoughts from listeners and readers on how they hear the language. (As a reminder, the Public Editor's office serves as a liaison between listeners and readers and the newsroom. We don't set NPR policy; that's up to the newsroom, including standards and practices editor Mark Memmott.)

There are a number of principles that newsrooms, NPR's included, consider when crafting guidelines for the language used to discuss issues.

One (and in my mind this is the most important) is to be factual, which means describing the situation as accurately as possible given the facts available at the time. Clarity is a related goal; among other things, this means not muddying the waters with vague language and euphemisms. There's also a desire to avoid language that has been politicized, and a need to respect those whose views the newsroom is reporting.

And Memmott, in particular, emphasizes that the newsroom's journalists should seek to avoid labeling people and instead use what he calls "action language" that describes them more fairly and accurately (so a person is "in the country illegally," not an "illegal alien"). I've written before about these issues, including here and here.

Sometimes these goals end up being in conflict. Abortion is one case where it may not be possible to reconcile all of them to everyone's satisfaction.

Let's start with NPR's policy, which, while regularly looked at, hasn't changed since 2010, when NPR adopted new language (the same as used by the vast majority of other major news organizations).

How do the principles apply here? For one, the vast majority of stories are about "abortion rights," i.e., the right to choose an abortion (legalized, with some restrictions, in the 1973 Supreme Court decision Roe v. Wade). One supports this right or one opposes it. That is both factual and clear, and emphasizes an action. The terms used by NPR are also largely apolitical, since neither side regularly uses those phrases, and thus NPR cannot be accused of adopting one side's terminology over the other.

Do not use "pro-life" and "pro-choice" in copy except when used in the name of a group.

This applies, of course, only to NPR's reporters and hosts who are covering the issue. When someone who is being interviewed uses one of those phrases, it is not cut out.

So to be clear, the phrases "pro-life" and "pro-choice" are heard abundantly on NPR.

Why are NPR journalists themselves told not to use them? In the case of "pro-choice," the language is accurate. Those on that side want women to have the option to choose whether to have an abortion. People who oppose abortion rights don't see it as a choice between two morally equivalent positions, but, opinions aside, that language does go back to the central focus of the legal and political controversy: it is a choice that the Supreme Court so far has ruled lies with the pregnant woman.

"Pro-life" is a bit murkier. The very strong implication is that those on the other side do not value life at all. Some people, of course, support the legal right to choose an abortion while at the same time would not choose that option for themselves, because they, too, value life. Others support abortion rights, but oppose the death penalty.

Memmott told me: "One of the issues with pro-choice versus pro-life has always been, if you use either, are you saying the others aren't anti-those things? Couldn't we instead use some action words to describe their positions? So 'pro-abortion rights,' 'anti-abortion rights' are slightly more action. They're still labels, but they're more of a sense of the action, the thinking, without necessarily saying one side is anti something."

In addition, "pro-choice" and "pro-life" are the shorthand phrases adopted by each side, and thus they have become politicized language.

But what about the principle of respect, as many have argued to the Public Editor's office?

One listener wrote that while NPR often tries to respect its subjects by using descriptions that they themselves use, "when a Pro-Life individual identifies herself as Pro-Life, NPR refuses to extend this courtesy and insists on calling her Anti-Abortion in a belittling and a derogatory way."

I agree that respect is an important part of the deliberation. But NPR should respect the strong feelings of all concerned, and "pro-life," for the reasons outlined, casts aspersions. Avoiding pro-life AND pro-choice is an attempt to make sure the debate remains civil. And once again, it should be noted, that guests on NPR's air often have the occasion to explain their thoughts in their own words; NPR does not tell guests what language they can and cannot use in cases like this, nor should it.

I am bothered by your choice of language because it seems to try to marginalize an opinion that NPR seems to oppose and it does so in a way that makes my views come across as being antagonistic toward women. I strongly believe that an unborn child is a person [whose] right to live is more important than a woman's right to an abortion, but my opinion is not derived from an antagonism toward woman, but simply from a desire to protect a vulnerable human.

Along those same lines, we heard from one listener:

There's a reason for this difference in the language ("for" v. "anti"): The debate is about taking away a right that is currently constitutionally protected. But these listeners make what seems to me as a reasonable point about the use of the word "anti." What if they were described as "opposing" abortion rights? Or as wanting to change the right? Both are accurate and less charged than "anti."

Memmott recently reissued NPR's guidance on the topic and included another point dealing with current legislation. We've received strong criticism of it from those who are opposed to abortion rights (much of it generated by people who are reacting to numerous columns about the guidance that have been published on conservative web sites).

In particular, the guidelines say that:

Proponents refer to it as a "fetal heartbeat" law. That is their term. It needs to be attributed to them if used and put in quotation marks if printed. We should not simply say the laws are about when a "fetal heartbeat" is detected. As we've reported, heartbeat activity can be detected "about six weeks into a pregnancy." That's at least a few weeks before an embryo is a fetus.

Critics also objected to NPR's longstanding guidance, dating from the presidency of George W. Bush, that:

The term "unborn" implies that there is a baby inside a pregnant woman, not a fetus. Babies are not babies until they are born. They're fetuses.

This is essentially the same as the guidance offered by the AP Stylebook, whose combined entry for "embryo, fetus, unborn baby, unborn child" reads:

While the terms are essentially interchangeable in many common uses, each has become politicized by the abortion debate even in uses not involving abortion. Anti-abortion advocates say fetus devalues a human life; abortion-rights supporters argue unborn child or baby equate termination of a pregnancy with murder by emphasizing the fetus's humanity.

Write clearly and sensitively, using any of the terms when appropriate:

Fetus, which refers to the stage in human development from the eighth week of pregnancy to birth, is preferred in many cases, including almost all scientific and medical uses: The virus can be disastrous to a fetus. The lawsuit alleges harm to a fetus that prosecutors claim was viable. The research was conducted on fetal tissue.

In scientific uses referring to the first seven weeks of human development after conception, use embryo.

The context or tone of a story can allow for unborn baby or child in cases where fetus could seem clinical or cold: Weiss said her love for her unborn baby was the strongest feeling she had ever felt. The expectant mother lost her baby in the seventh month of pregnancy.

Of course, as the many critics have pointed out, and AP acknowledges, the use of "fetus" is in direct contrast to the everyday language of society, where references to a "baby" abound, even at the earliest stages of a pregnancy.

Memmott told me: "We fully understand that someone who is pregnant is thinking of that as a baby. We're not saying they aren't."

Is taking "baby" and "mother" and "life" out of the conversation profoundly biased in favor of those in favor of abortion rights? Science would say no. NPR has explored that, including in Tuesday's interview on Here & Now where the guest's conclusion was: Scientists have widely differing opinions on when life begins and often don't wrestle with the issue at all.

Where does this leave us?

At an impasse, I'm afraid. Journalism standards and ethics, aside from prohibitions on, say, plagiarism, are not always clear-cut. They represent a best effort to put in place policies that attempt to produce fairness and accuracy. Allowing each side to choose the language it wants does not produce, much less guarantee, that goal.

Despite what some people on both sides of the abortion debate seem to believe, NPR's intent is not to take a side in its language choices. (See Morning Edition's Steve Inskeep's thoughts here.) And as Memmott told me, "We're trying hard. And I know people disagree." He added, "We're trying hard not to adopt the language of any side."

Until someone comes up with even more neutral language for this discussion (and many have tried) NPR should stick to its policy.