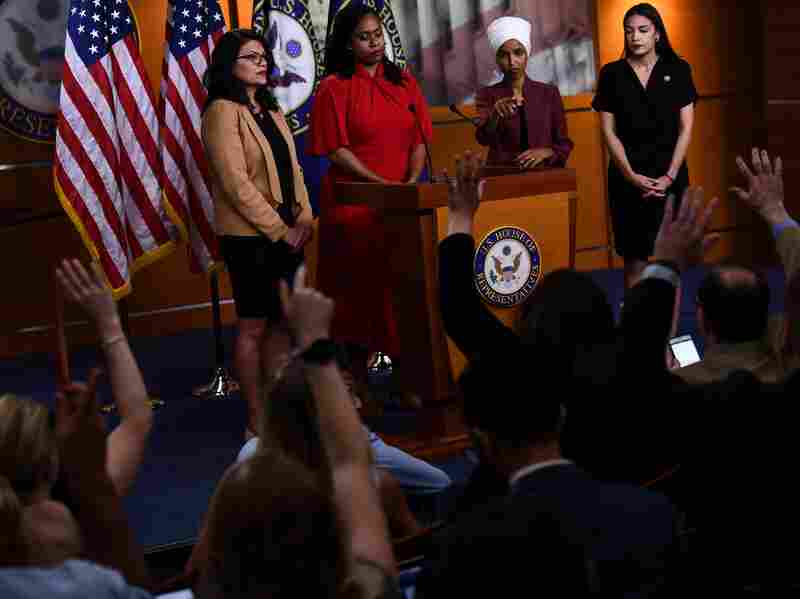 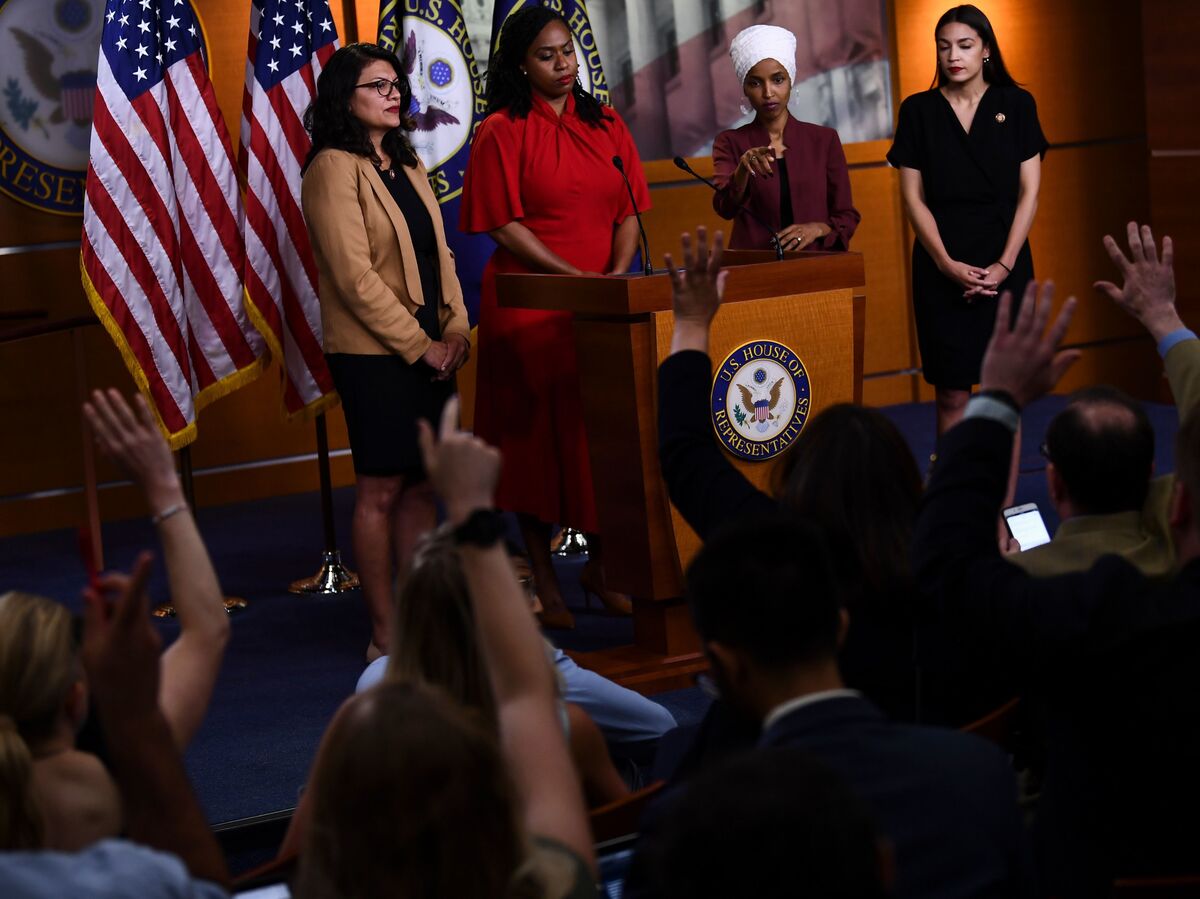 US Representatives Rashida Tlaib (D-MI), Ayanna Pressley (D-MA), Ilhan Omar (D-MN) and Alexandria Ocasio-Cortez (D-NY) hold a press conference at the US Capitol in Washington, DC on July 15, 2019 to address remarks made by President Donald Trump.

The inbox overflowed this past week with passionate (and yes, often angry) listener and reader feedback about NPR's decision to use the word "racist" to describe President Trump's tweets that certain members of Congress should "go back and help fix the totally broken and crime infested places from which they came." He didn't name the members of Congress, but it was clear he was referring to four Democrats: women of color known as "The Squad," three of whom were born in the U.S.

The emails fell into three broad categories. Some praised what they said was NPR's use of clear and accurate language to describe the president's words. (To be clear: NPR used the word "racist" to describe the tweets, not the man who wrote them.) Wrote one listener: "At some point, declining to label dictionary definition racism, white nationalism, and white supremacy what they are isn't august objectivity: it's bias against reality."

On the opposite side were those who said the word "racist" was simply inaccurate, that the president was misquoted, because after telling the lawmakers to "go back," he also said they should "come back" with solutions, wrote one. This, of course, ignores that three of the four are "from" the U.S. Some of those who objected to use of the "racist" word claimed that NPR had ignored previous comments by those the president attacked. This last complaint — the equivalent of the playground complaint, "he started it" — is simply not true; NPR has reported extensively on the stated views and actions of the four members of Congress.

In the middle, including many who described themselves in their emails as Democrats, were those who argued that NPR's use of the word "racist" was taking sides. "I think the President's comments were intemperate, unhelpful, antagonistic, un-American, and flat out wrong but I can make my own assessment. Please just report the news," wrote one listener.

The use of the word was a major change for NPR, which normally resists using potentially provocative labels to describe people and their actions. NPR previously had avoided the word (in favor of the euphemistic "racially charged") when describing other comments by the president that were also deemed by many to be "racist." As NPR's Wait Wait...Don't Tell Me (which is a comedy show and not connected to the newsroom) put it over the weekend:

[Host Peter] SAGAL: So this go back to your country thing was so unvarnished that many news organizations threw up their hands and just called it racist. Even NPR, which stands for "No, Please don't say Racist"... NPR said it. This is an organization that is so evenhanded it covers a kick to the crotch by talking both to the crotch and the foot.

The reaction to NPR's word choice was, in microcosm, the equivalent of the last two years' worth of debate among listeners and readers over the role of journalism — specifically that of NPR — at a time of great political divide.

With all due respect to those who wrote to say that the label was inaccurate, I don't think it was. NPR, to its credit, provided plenty of substantiation to demonstrate that the words "go back" are a long-standing racist trope experienced by people of minority or immigrant backgrounds. Again, NPR did not call the president a "racist"; it used the word to describe his tweets and then backed up its use of the word with reporting to show how a case could be made that the word was, objectively, an accurate description of the language in the tweets. Listeners who were not familiar with the history of the term "go back" and why it falls squarely in the realm of "racist" language thus had an opportunity to learn — and isn't that an important reason to consume any journalism?

So, the question for me boils down to the choice to use the word, as opposed to simply quoting the president, along with his critics and defenders, and letting listeners come to their own conclusions. After all, that's how NPR often describes its role.

There's an additional consideration here. We heard from listeners who said that, because Democratic politicians immediately used the word "racist" to describe the tweets, and the Democratic-controlled House of Representatives condemned the president's language — while most Republicans remained silent — NPR's use of the word put it in a partisan camp.

Ethical journalistic decisions often aren't clear-cut (aside from, say, the prohibition on plagiarism). As a result, NPR's choice was certain to upset some listeners either way. I can make an argument for both sides, as well.

Pushed to decide, I think the newsroom was justified. It's true that NPR needs to be very careful to avoid engaging in a partisan framing of issues. I've written several times about this. (Here's one column and another.) And for perception reasons alone, it's unfortunate that the word is being embraced almost entirely by one political side and not the other.

But if it is to be trusted, reporting also needs to be clear and accurate. There's no ambiguity about the president's language. Using an accurate label to describe his tweets helps listeners understand the intensity and nuance of all the subsequent debate.

I do have one major caveat: the sheer number of times that NPR used the word "racist" to describe the tweets eventually sounded like a piling on, particularly for those who tend to leave NPR on all day, as some listeners do. Part of the problem is that limits on broadcast time, especially in the top of the hour newscasts, means that reporters and newscasters often must resort to shorthand labels to describe events, rather than going into elaborate detail. But that is not an excuse; in situations such as this NPR needs to be judicious, to avoid precisely the perception that it is taking sides.

A key ethical foundation of NPR's journalism is transparency. As the NPR Ethics Handbook puts it:

To inspire confidence in our journalism, it is critical that we give the public the tools to evaluate our work. We reveal as much as we practically can about how we discover and verify the facts we present. We strive to make our decision-making process clear to the public, especially when we find ourselves wrestling with tough choices.

NPR's Code Switch podcast has provided transparency on NPR's decision with the language. It convened a conversation between Mark Memmott, NPR's supervising senior editor for standards and practices, who was deeply involved in making the call to use the word, and Keith Woods, the vice president of newsroom training and diversity at NPR, and a longtime respected journalist (who was not involved in the decision). Woods took the opposite view of that of NPR (and many other newsrooms).

Their extended conversation was an excellent primer in how journalists — and NPR institutionally, in this case — think through their roles and their work. I'd urge you to listen to the whole thing, or read the transcript.

One excerpt I'd highlight: host Shereen Marisol Meraji asked an excellent question about the "consequences" of using the word "racist" (or not using it).

I'm in this profession because I see it as a vehicle for fighting for some of the things that are most important to me, including racial justice and maybe beginning with racial justice; I care about the profession for lots of reasons, but that one above all others. And so how it survives, how it thrives is important to me for those reasons. The stakes to me are about the thriving and surviving of the profession.

When journalism loses the credible ability to say that we are dispassionately trying to tell you what happened, taking as much of our judgment out as we can every day, knowing that we're humans and we can't take it all out, when we start losing that battle, we start losing the battle for the credibility that we have as a profession — that's my stakes.

Obviously, there are moments when journalists have stood up and said, this is not right or here's what this is. You think about, obviously, Edward R. Murrow. You think about Walter Cronkite. I'm not comparing us to those two giants in any way at this point. But there are points when journalists do need to try to very clearly state, this is what this is — not as an opinion but as, you know, marshal your facts.

Yes, we don't like labels in most cases, but if the label fits, don't shy away from it — be clear. And I think that that also lends to our credibility. I do worry about the same things. The irony here is that Keith and I agree on almost everything in most cases, and I think we agree on almost everything here; we just reached a different conclusion, which I find to be the beauty of journalism."

This office is in a prime place to assess at least some of the consequences in this case, and so far, it's a wash. The feedback we've received is equally positive and negative, for the reasons Woods and Memmott outline above. All that said, the feedback comes from a very small subset of those in the NPR audience, many of whom are clearly partisans of one side or the other and want NPR's language to reflect their own views. Whether the vast majority of listeners thinks NPR continues to be an honest broker of information, and the long-term consequences of NPR's decision, remain unknown.

One final point — as with the debate over whether NPR should use the word "lie" to describe the president's regular misstatements of facts, I regret that the focus on the one word ("racist") has obscured something more important: the reporting.

Yes, clear and accurate language is vitally important. But there are also plenty of ways to describe what the president said and the import of those words without using either "racist" or the vague "racially charged."

I'm reminded of another time this very issue came up, when the president was said to have used a profanity to describe African countries. It's worth revisiting what Terence Samuel, the NPR deputy managing editor who was making the early decisions on that coverage, told me of his initial avoidance of the word. He said then: "I wanted to make sure that we told th[e] story, rather than getting hung up on the word" Trump had used. Samuel added: "At the end of the day I knew it would be harder to tell the story without using the word but I thought it was an effort worth making because the larger story was, it's not that he was talking about 'shithole countries' it's that he was comparing people, and disparaging people."

Again in this case, what really matters is not the word, it's the reporting. Did the reporting accurately capture why Trump's language was so upsetting to so many, even as others appeared not to be bothered by it? Do listeners have a better understanding of the issue after 10 days of reporting on it? I think most of them probably do, and we shouldn't lose sight of that in the focus on the word used to characterize the language.

Juliette Rocheleau and Liana Van Nostrand contributed to this report.