Accessibility links
A Former Slur Is Reclaimed, And Listeners Have Mixed Feelings : NPR Public Editor When is it okay for NPR to use the word "queer"? 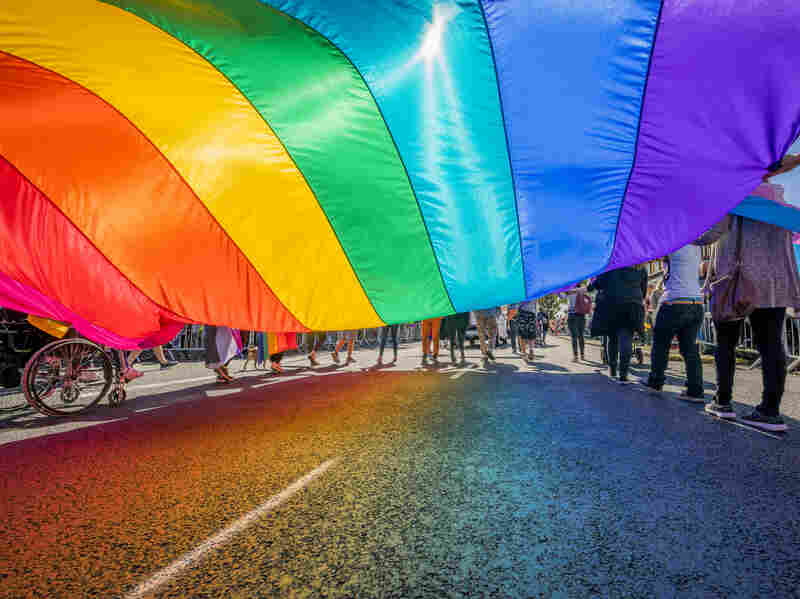 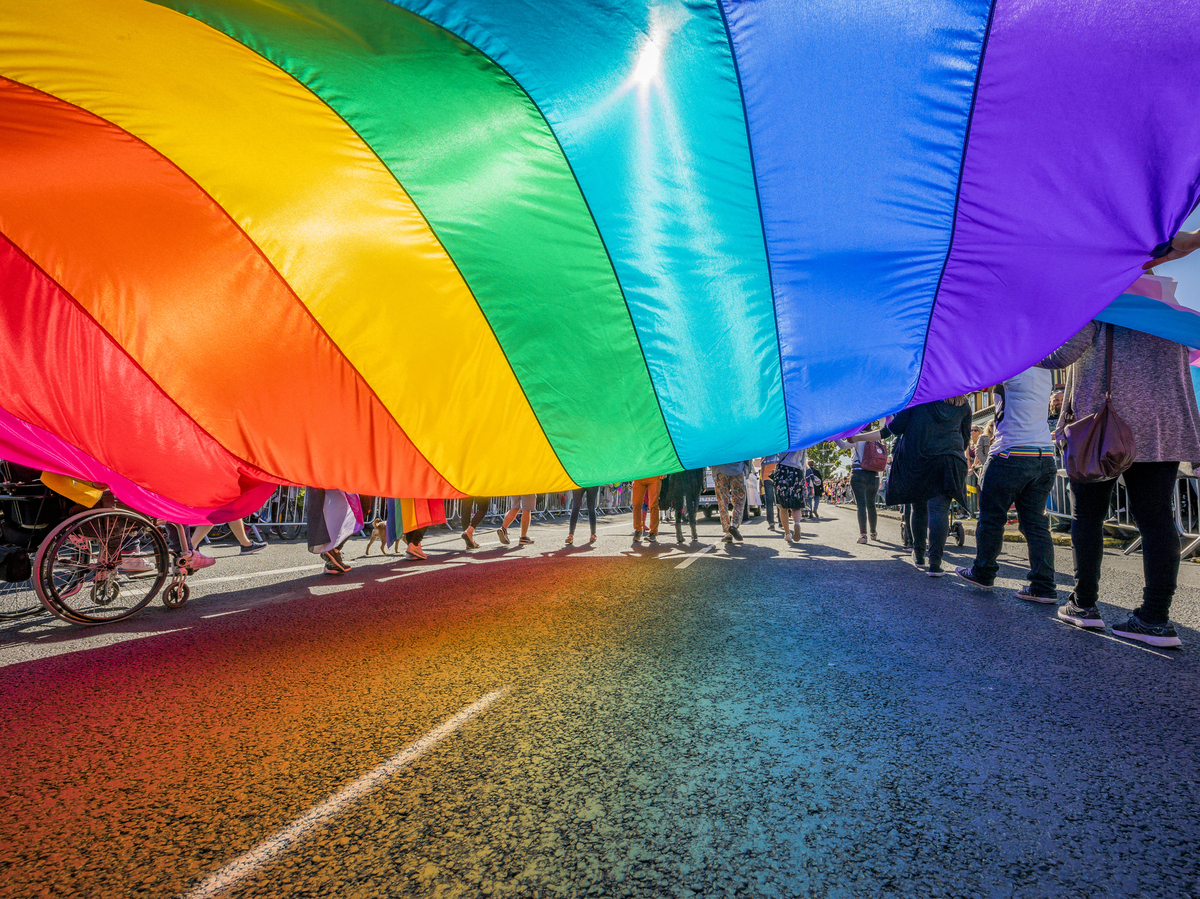 As language shifts, terms take on new meanings. But when is it appropriate for media organizations to reflect those changes?

In recent years, the word "queer" has been increasingly seen and heard in NPR reporting, upsetting some listeners. One listener from Illinois wrote, "I am a gay man and I did not spend my entire life being called queer as a slur for journalists to accept it as reclaimed. It isn't." Another listener wrote to us from Massachusetts: "If you have made a decision to allow LGBT people to be referred to as 'queers' on the air, then please say so and justify that decision ON THE AIR."

After a recent report from Weekend Edition Saturday on the LGBTQ dating app Grindr used the word "queer" multiple times, one listener from Kentucky wrote: "... it deeply disturbs me that national media may be getting on the 'labeling me as a queer' train."

To explain NPR's guidance on the Q-word, I spoke to newsroom leaders on how the organization currently handles language around LGBTQ reporting.

NPR uses the regularly updated Associated Press "Stylebook" and consults guidance from NLGJA: The Association for LGBTQ Journalists. In a 2018 note, Mark Memmott, NPR's editor for standards and practices, wrote, "You may have noticed in recent months that we've been OK with adding 'Q' to 'LGBT.' It's clear that LGBTQ is increasingly accepted, but do be aware that "queer" is still a word that many find offensive." I asked him to expand on this thinking.

What you can see is an evolution, and I think you see that in the culture at large.

Memmott told me he wanted "to make the point that for many people, it's still a difficult word to hear or read because of the past history. But language evolves. Words evolve. And we wanted to reflect that we do change as the language changes."

Originally a pejorative term for gay, now being reclaimed by some gay, lesbian, bisexual and transgender people as a self-affirming umbrella term ... Queer is still offensive as an epithet to many.

Jason DeRose, Western bureau chief and senior editor who oversees NPR's LGBTQ reporting, said that when NPR does use the word "queer," it is not done as an afterthought, but the result of much conversation by newsroom leaders. A longtime member of NLGJA, DeRose noted that the discussion is also not new for people within the LGBTQ community. And after over 11 years at NPR, he's witnessed a wider shift to accept the word.

"What you can see is an evolution, and I think you see that in the culture at large," said DeRose. "There was a time when people said 'homosexual.'" DeRose said that this word, once considered appropriate for air, is no longer advised for an NPR journalist to use.

Looking specifically at "queer," the word can be found in NPR transcripts dating back to 1972. Instances of the word are found in quotes from LGBTQ people citing insults they had heard. During the 1980s and '90s, subsequent references appear in interviews with members from the LGBTQ activist group Queer Nation, which led the charge to reclaim the Q-word.

After this usage, the word appears occasionally in quoted material: titles of artist exhibits, names of academic programs and sound bites from LGBTQ people. Around the end of 2015, queer as it is currently used by NPR journalists slowly started appearing.

Supervising senior producer and editor Alicia Montgomery – then a senior editor for Code Switch – remembers pushback from the greater NPR newsroom on publishing the word. She welcomed the conversation.

"As long as we're having this sort of robust discussion and we can explain to a broader audience why we made the editorial decision that we did, that's a standard that I'm as comfortable with this as I can be," said Montgomery. But those conversations are rarely made public, and Montgomery wishes the newsroom had "more opportunities to have those discussions" with listeners and readers.

Code Switch assistant editor Leah Donnella, who wrote the story regarding queer Muslims, said she decided to use queer because both she and her editing team agreed that the language was the most appropriate for the group they were writing about in the piece.

Donnella said that the Code Switch team debated whether to publish a story on the word "queer" for the blog's Word Watch series, which offers a deep dive into the history of a word or phrase and how it came to its present form. The team ultimately decided against the story because they felt that "queer" was "being used commonly enough and was understood enough that it wouldn't be super valuable" for the Code Switch blog, which tends to serve a younger, more diverse audience.

For Donnella and her editing team, she said that the word was common in their social circles, and so the decision to use the word in her writing was not an attempt to take back the word, but to reflect the language she was hearing from others. But she empathizes with those listeners who worry that a news organization could be reclaiming the word by itself. "NPR doesn't get to reclaim 'queer,' and so I think in that way, it can only really be reclaimed by people who identify as queer," said Donnella.

The word "queer" today is found widely in NPR reporting, but comfort levels with the word vary among NPR journalists. For some, the hesitancy seems to stem from the fear that it will unintentionally offend. Many times, the apprehensions follow generational lines, DeRose said.

"It is quite often a generational issue where younger people — millennials — are more fine with it. Gen Xers like myself are somewhat OK with it. Some you might find in each category," said DeRose. "And then older people or boomers, maybe, who find it problematic."

DeRose's explanation echoes the sentiments of a 71-year-old listener from California who wrote, "The usage of 'queer' is simply painful." He continued, "A more judicious use of a word viewed as pejorative to many or most (at least in my age cohort) is in order."

"You have to understand, I'm an old guy," said Mondello. "When I was growing up, it was an insult. And so for me, as a gay man, it was an awkward thing to use when it first started coming back."

Mondello, who recently turned 70, said that he has grown more comfortable with the word, but still hesitates to use it: "It is not something that comes naturally to me the way that it would to a 20-year-old. And for that reason, I'm careful with it. But I think that, to some extent, the way that it is used in casual conversations by 20-year-olds is going to matter more to the next 10 years than the way I use it."

There's a big group of us who are talking about this and thinking really hard on how best to kind of describe and talk about our community in as inclusive a way as possible.

Danny Nett, a 24-year-old engagement editor who identifies as queer and gay, also grew up hearing the word "queer" used as a pejorative. But today, he says he's a "big fan" of the word, and would like to see NPR use it more.

"I think it tends to sometimes be oversimplified as like, the 'crazy' teenagers and 20-somethings want to use this word and everybody else doesn't like it," said Nett. "And I think that's a little ahistorical because, I mean, the word 'queer' has been used in academic circles or in activist circles for decades."

Mondello remembers some of those early activist declarations. "It was probably during the AIDS crisis and the huge rallies," Mondello said. "When I started hearing it at, you know, political rallies and things like that, used by people to describe themselves with pride — that's a very empowering thing."

Today, Mallory Yu, a producer for All Things Considered in her late 20s, agrees that she finds power in the word. Yu, who identifies as queer, said she appreciates the fluid nature of the word — a shared quality among many LGBTQ people.

"I like saying that I am queer because I am. I don't fall on society's ideas of a traditional sexuality or a traditional gender identity. And I'm OK with being queer," said Yu. "It is not OK if someone uses that word against me as a slur. But if, you know, someone like a co-worker or a colleague or a friend describes me as a 'queer person' at this organization, I'd be totally fine with it."

Since joining NPR in 2013, Yu said she has spent a lot of time evaluating these issues.

"In terms of reporting, I think it's really important to not use the word 'queer' when someone does not identify that way," said Yu. "There's a big group of us who are talking about this and thinking really hard on how best to kind of describe and talk about our community in as inclusive a way as possible."

As language shifts, NPR's newsroom leaders remain cautious (rightfully so) to avoid moving too fast. My conversations, both on and off the record, with newsroom members about the word queer all landed on one theme: respect.

Senior editor DeRose said, "I am sympathetic to people who do find it problematic. I think that it's important to understand that we're trying to be respectful and use the language that people in stories use."

There's not going to be a perfect solution to simultaneously please those people in the LGBTQ community who want to use the word "queer" and those who find it offensive, or otherwise problematic. Transparency would help; that NPR is having these conversations is worth sharing with listeners and readers. (A recent peek into newsroom thinking behind language included this conversation on using the word "racist.") That would also be useful for a separate group of listeners: those who are not aware of this debate within the LGBTQ community. While time limits do not always allow for every newsroom decision to be explained in-depth on the air, NPR should wherever possible help the audience understand its intentional, thoughtful language decisions.