In fiscal year 2019, NPR's newsroom makeup was just over 28% people of color and just under 71% white. Nearly 57% of the staff was female, according to newsroom staff diversity statistics provided, at the request of the Public Editor's office, by NPR's human resources department.

We've been tracking the diversity of NPR's newsroom staff annually in the nearly five years since I've been in the Public Editor role; usually the numbers provided are as of Oct. 31, but this year they coincide with the end of NPR's fiscal year, Sept. 30, 2019. My predecessors looked at the topic, too. As I wrote last year, "Having a diverse newsroom is crucial if NPR wants to tell stories that matter to an increasingly diverse country." And, "Numbers don't tell the whole story, of course, but they offer one way to keep NPR's progress (or lack of significant progress in recent years) front and center."

The shift toward a more racially and ethnically diverse newsroom has been incremental each year, but over the five years, the change looks a bit more substantial: Five years ago the newsroom was 77.6% white. 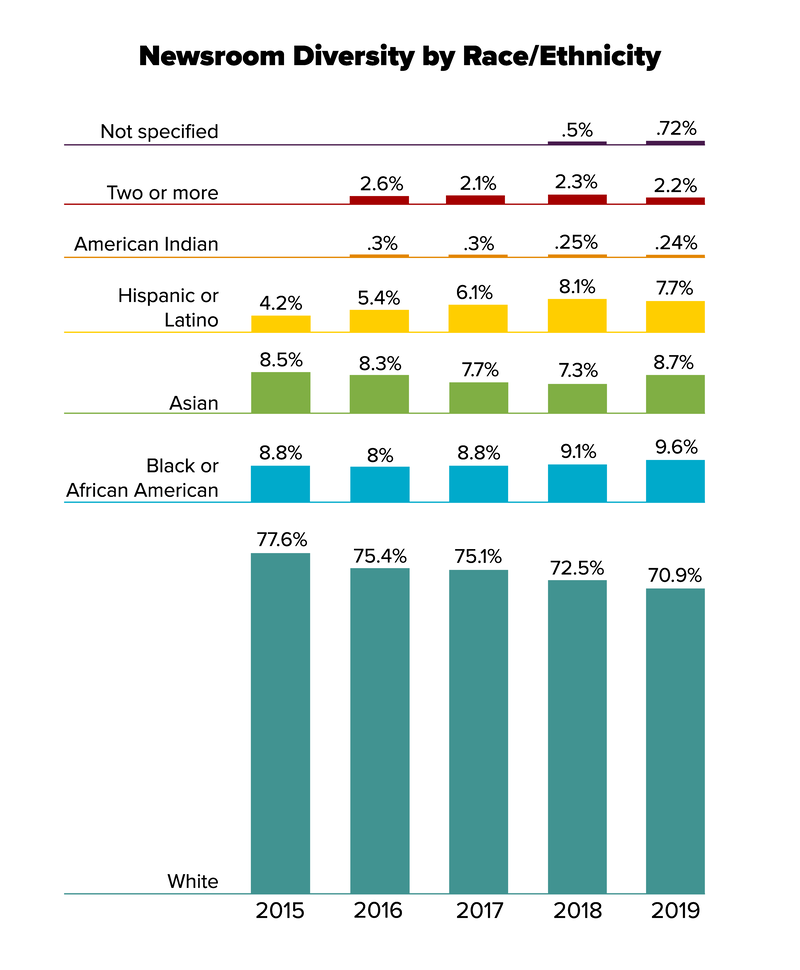 Numbers as of Sept. 30, 2019. Previous years were as of Oct. 31. In 2016, NPR's human resources department expanded the options with which newsroom employees could identify for race and ethnicity to include "American Indian" and "Two or more." Juliette Rocheleau/NPR hide caption Numbers as of Sept. 30, 2019. Previous years were as of Oct. 31. In 2016, NPR's human resources department expanded the options with which newsroom employees could identify for race and ethnicity to include "American Indian" and "Two or more."

This year, there are a few items of note. The newsroom grew by 20 positions to a total of 416. And, of course, some people left, part of the normal turnover of any newsroom or other workplace. Of those hired in the past year by NPR overall (not just the newsroom), nearly 48% identify as people of color. 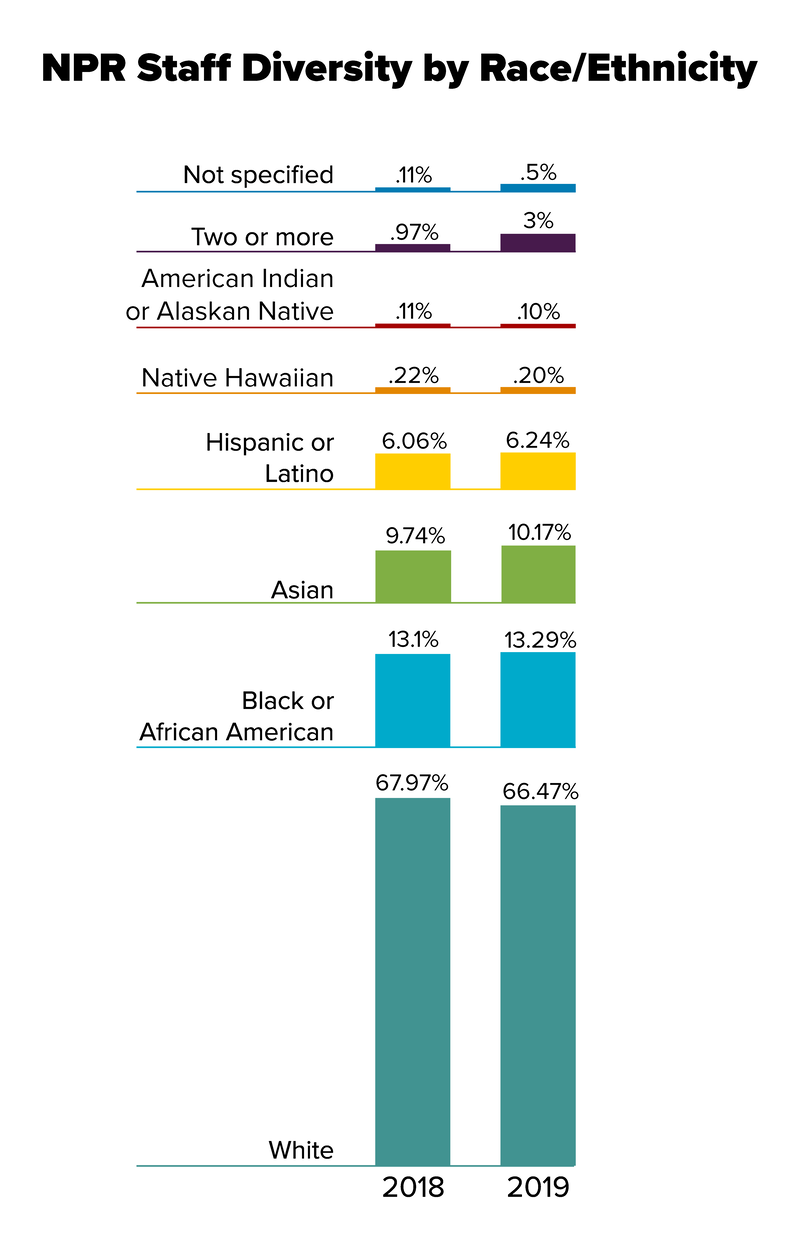 Does not include interns or temporary employees. Categories reflect language provided by NPR. Numbers as of Sept. 30, 2018 and 2019. Juliette Rocheleau/NPR hide caption 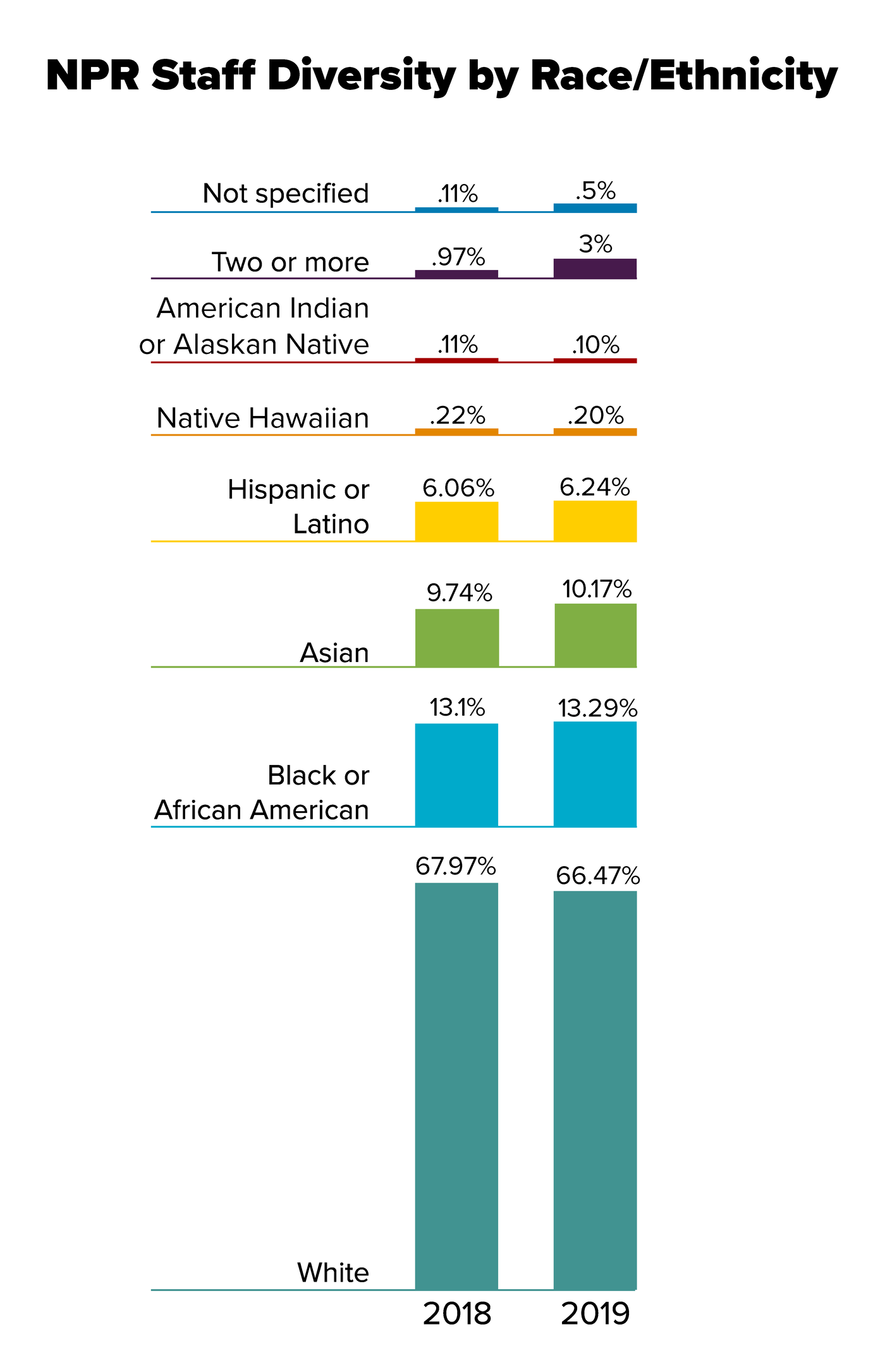 Does not include interns or temporary employees. Categories reflect language provided by NPR. Numbers as of Sept. 30, 2018 and 2019.

All the data can be found in the accompanying charts and is based on how employees identify themselves. This year we are also posting the numbers for NPR's overall workforce, which was 66.5% white and 33% people of color at the end of the fiscal year. Numbers as of Sept. 30, 2019; previous years as of Oct. 31. Currently, NPR does not offer gender identity options outside of "woman" and "man." Juliette Rocheleau/NPR hide caption 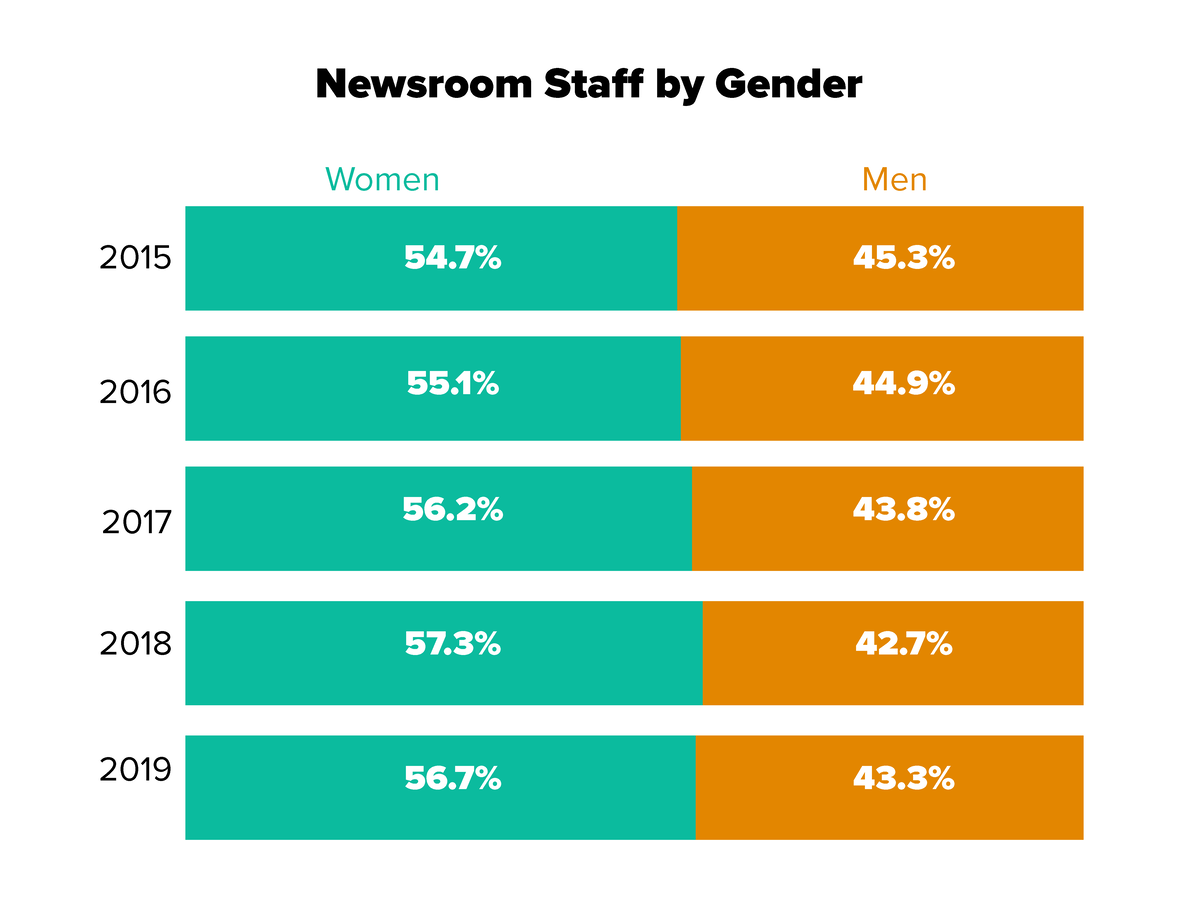 Does not include interns or temporary employees. Numbers as of Sept. 30, 2018 and 2019. Juliette Rocheleau/NPR hide caption

I wanted to know what the newsroom leaders and NPR's new chief executive think about diversity in the company.

Nancy Barnes, who joined NPR as its top newsroom executive in late November 2018, said the numbers aren't where they need to be: "We still need to do more to increase the diversity of the newsroom. The diversity of America is changing faster than the diversity of our newsroom." The last census in 2010, she said, showed the country's white population stood at about 70%; now it's estimated to be about 60.5%. "So you can see the shift coming at us," she said.

Keith Woods, NPR's vice president of newsroom training and diversity, said hiring more Latinos remains a "chronic need," even as the newsroom has "in fact increased the number of Latinos hired. To Nancy's point, the pace of change is too slow against the challenge. And if we're looking to ... if we're seeking to look and sound American, then we have to put our foot down on the gas on that seriously."

But he cautioned against looking solely at the percentages of people of color in the newsroom in judging NPR's progress against the rest of the journalism world.

With new leadership in the newsroom comes an opportunity for change. The newsroom has started to formulate specific plans to increase diversity, Barnes said. The plans include formulating goals for who takes part in hiring panels and who is included in candidate pools when filling open jobs; it should be noted that many in the newsroom have already adopted these types of goals as standard practice. The progress toward meeting those goals will be posted in the newsroom and shared at staff meetings, "so that we are holding ourselves accountable for making progress," she said.

In addition, Barnes said, "we need to diversify where we're recruiting. Too often, our postings go just on the NPR website," due to budget concerns; some websites charge to post job listings.

The newsroom is also considering requiring training for all managers in recognizing unconscious bias. This type of training is now standard — and often mandatory — in many workplaces.

She said she hopes to start putting plans in place by the new year.

Some factors are outside of NPR's control. NPR's success in the podcasting world, in particular, has led to greater competition. "We have a successful business model and suddenly you have other news organizations wanting to invest in audio and they don't have those skill sets," Barnes said. "So where do they go shopping for talent? They come to NPR."

As a result, Woods said, "we have to learn organizationally how to get better at retention, period. You know, it's one thing to lose somebody because they got offered a job of a lifetime someplace else or because, you know, their partner got a job or they fell in love with somebody who lives in another town. You're going to face that all the time. It's something else to lose people because they just didn't feel like they could thrive in the organization."

NPR's leadership has previously acknowledged that issue of retention, and took steps to deal with it in recent years. Woods said mentorship programs and affinity groups have been put in place, but "none of those are more than 18 months old right now."

There are multiple ways to look at diversity. While Barnes is putting in place systems that she hopes will lead to a more diverse newsroom, she said "I have heard very specifically criticism about the top news leadership in the newsroom being too white."

She said, "It's going to take me a little bit of time to diversify the very top leadership ranks. What I've said to people is: I will be accountable. You're going to have to hold me accountable over time. You know, three years, two years from now, we'll look back and we'll see some changes."

The second-level senior ranks of newsroom leadership — managing editors, executive producers of shows, hosts and editors who run the reporting desks — "is actually really quite diverse," Barnes said. The middle layer of newsroom managers below that, however, is not very diverse, and "is really where a lot of work has to be done."

That middle layer is key, Woods said, because it is where stories get pitched, ideas are generated, and most day-to-day decisions are made. "It is at that level in the organization that the content and the voice of NPR is made," he said.

We'll have more on how that plays out in an upcoming column about new research from Woods' team examining the diversity of the sources heard on NPR's air.

I'll leave the last word to John Lansing, who started as NPR's chief executive in mid-October.

"The goal for me would be to move toward a newsroom that looks proportionately more like what America looks like," he said, "for all the right journalistic reasons: so that we have decision-making around editorial judgment that's reflective and representative of the country as a whole."

Notably, he said, the overwhelmingly white demographics of NPR's audiences (which includes podcasts, not just the daily reporting content from the newsroom) did not change in the past year. That has serious implications for NPR's future, as the country's makeup continues to change. "It's a concern of mine," Lansing said, adding, "It's one of my top priorities, to move our diversity numbers up both within the newsroom and in our audience. Again — and this is the way I think about it — in the direction that would allow us to reflect what America looks like and what it will look like in the future."

He said he does not yet have specific plans for how he intends to address the issue, but expects to do so on an accelerated timetable, by the end of the year. The leadership of NPR overall is a particular concern, he said.

As the former head of Voice of America, one of the most diverse newsrooms in the world, he said bluntly that "it's a little bracing" to see less diversity at NPR than he is used to.

"While I think we have just a wonderful management team that I've inherited, I do have concerns for the future that we make sure we're also thinking specifically about leadership diversity going forward," he said.

As openings arise, he said, one of his immediate concerns is that NPR is "being proactive and developing good talent pools and diverse potential hires. And then I think aligning all of the leadership's interests in any way that they can affect our ability to both improve our diversity of workforce and our diversity of audience — that it becomes everyone's role and something that they'll be incentivized to focus on" through management goals for the year.

Look for the column on how NPR is doing in diversifying its sources in the next couple of weeks.