New research into the diversity of NPR's on-air sources shows that in fiscal year 2018 (ended Sept. 30, 2018), the voices heard on NPR weekday newsmagazines were 83% white and 33% female.

Compared with when we last examined newsmagazine source diversity four years ago (looking at NPR's data from fiscal year 2015), the percentage of white voices on All Things Considered and Morning Edition has gone up noticeably, and the percentage of female sources has gone up modestly. The results vary by program, but they show that the numerous internal efforts in recent years to diversify the sources heard on NPR have had little effect on NPR's numbers overall, even as some of those internal efforts have led to improved source diversity on the weekend shows, in particular (more on that below).

In a memo to the newsroom Friday, Nancy Barnes, NPR's top news executive for the past year (who was not at NPR during the period studied), wrote, "There's some good news in the numbers and some reasons we should be concerned." She added, "Whatever the reasons, this cannot continue. We have to make significant improvement if we're going to live up to the mission we've set for ourselves to look and sound like America."

Breaking it down: Gender 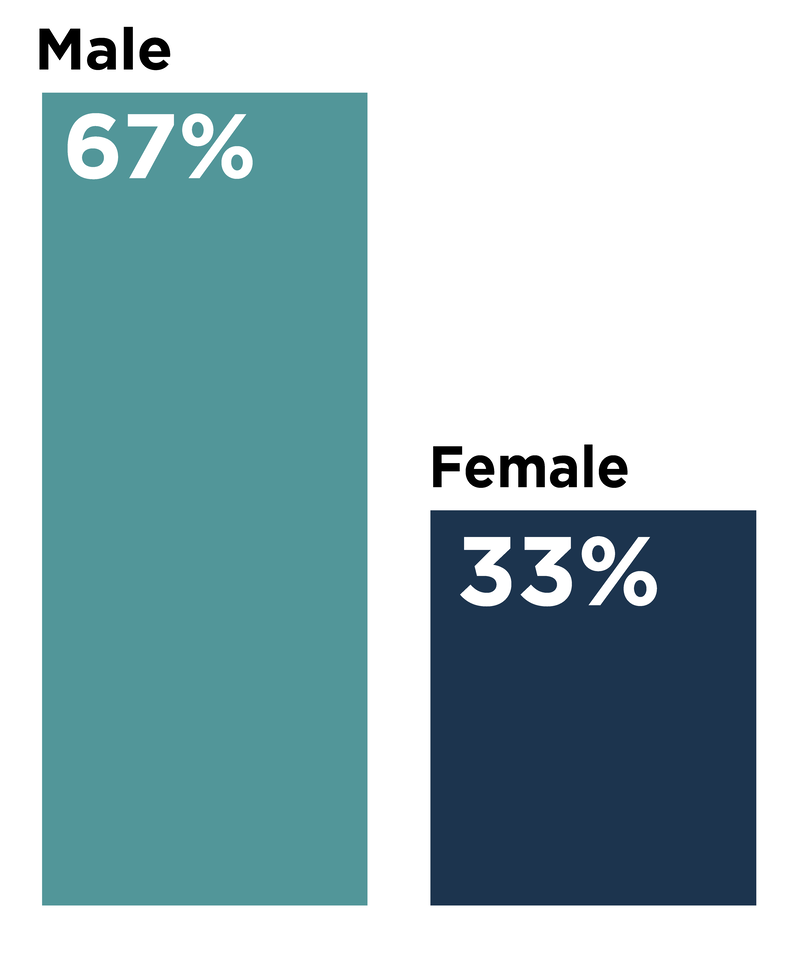 A 2018 study of the gender diversity of sources on NPR's weekday newsmagazines shows this breakdown. Transgender and nonbinary sources are 0.2%. Juliette Rocheleau/NPR hide caption

This research was based on a sampling of the sources in both the weekday and weekend newsmagazine shows. The last time NPR did the research, only the weekday newsmagazines were sampled.

Gender is one area where NPR has made slow gains in the last five years — but it still is not even close to parity. In FY 2013, female sources accounted for 28% of those heard on the sampling of weekday newsmagazines that were tracked, and that went up to 30% in FY 2015. For FY 2018, the number was 33%. (Transgender and nonbinary sources, to the extent the trackers were able to identify them, made up less than 1% of FY 2018 sources.)

Saturday's and Sunday's Weekend Edition, sampled separately, showed higher numbers of female sources, 38% each, as did Weekend All Things Considered (35%).

Breaking it down: Race and ethnicity 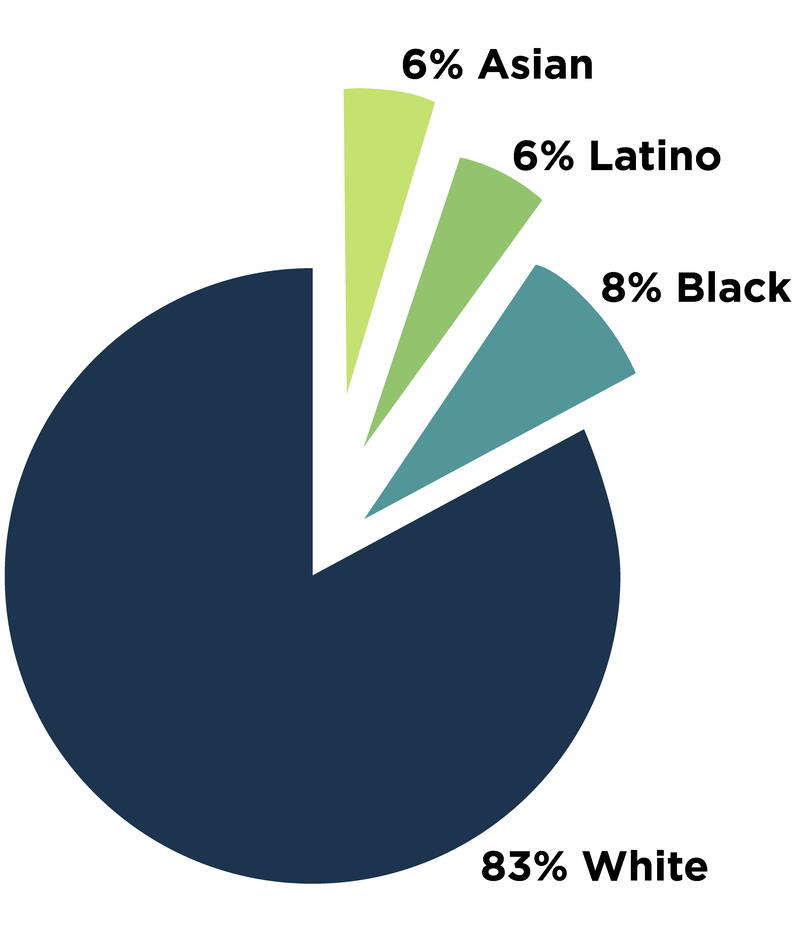 A 2018 study of the racial/ethnic diversity of sources on NPR's weekday newsmagazines. Totals reflect individuals with multiple races (i.e., an individual can be counted in more than one race). Juliette Rocheleau/NPR hide caption 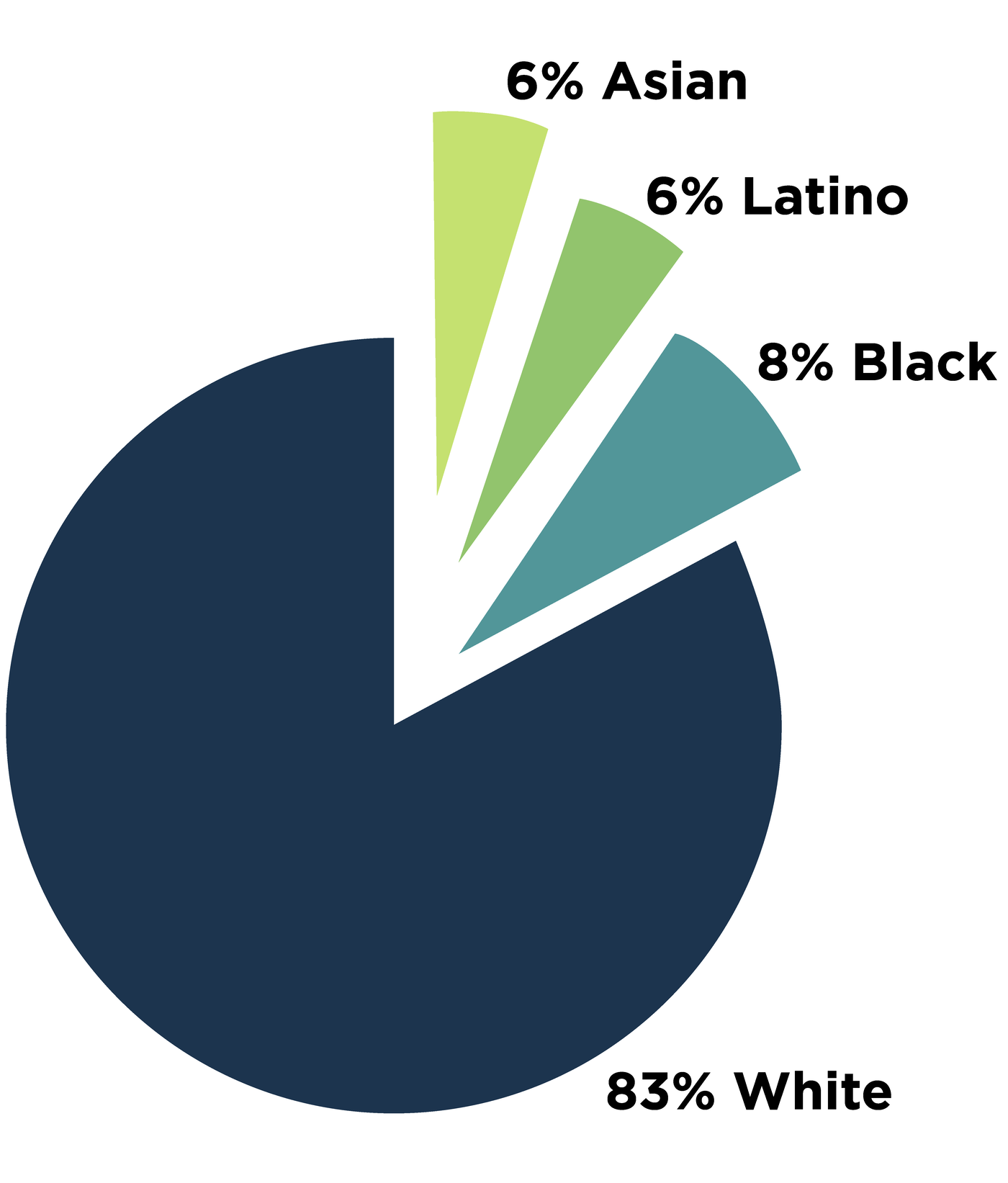 A 2018 study of the racial/ethnic diversity of sources on NPR's weekday newsmagazines. Totals reflect individuals with multiple races (i.e., an individual can be counted in more than one race).

The weekend newsmagazines, particularly Weekend Edition Sunday and Weekend All Things Considered, talked to more racially and ethnically diverse sources than did the weekday newsmagazines.

Possible reasons for the results

In her note to the staff, Barnes singled out NPR's Research, Archives and Data Strategy team, which is led by Laura Soto-Barra, and in particular researcher Carol Malinowski, "for working hard to keep this unique research alive," adding, "we can't hope to improve without reliable data to point the way." The data were analyzed by Gwynne Villota of NPR's Audience Insights team. Keith Woods, NPR's vice president of newsroom training and diversity, oversaw the project.

Woods and Barnes cited a couple of possible reasons for the FY 2018 changes, particularly around race and ethnicity in sourcing. "One is that in the period between 2013 and 2018, the percentage of stories that included politics nearly doubled," Woods said. "That happened while the makeup of the administrations we were covering drastically changed. So, you double the amount of coverage of a much whiter and more male administration, and it's bound to have some impact."

The people most often called on to comment fall into categories largely dominated by white men, as well: political or government officials, other journalists, corporate or nonprofit officials or well-known academics and other experts.

The areas where NPR has the most diverse sources, such as in its education coverage, have the smallest percentage of the overall content. (Arts coverage is an exception; it's the second-largest slice of the topics pie and also one of the most diverse.) "We are doing our best where we are doing our least in content," Woods said. "If we don't change the proportions and we keep increasing the percentage of stories we're doing about politics and that chunk of our content either remains the same or grows," then the source diversity results are unlikely to fundamentally improve, he said.

In addition, Barnes said in her memo, in the last couple of years NPR increased the number of what it calls "two-ways" (one-on-one interviews), "where we have fewer sources overall" than in reported pieces, which can include more interviewees.

Across all the newsmagazines, the sources in reported pieces were more likely to be female (37%) than were the sources in host-conducted interviews (31%).

Diversity In Sourcing By The Numbers

This sourcing project examined the diversity of sources on NPR's weekday newsmagazines and expanded to include weekend newsmagazines. Charts reflect data for 2018 and, when available, compares findings to recent study years.

The view from the newsroom

I reached out to all the newsmagazine executive producers and heard back from Kenya Young, of Morning Edition, and Natalie Friedman Winston, of Weekend All Things Considered. Young said that she appreciates having the numbers because it "makes us more aware." The program itself also attempts to keep track of sources, she said, in particular those on the Up First podcast, which doubles as the segment that leads off Morning Edition each morning.

The challenges, she said, are two-fold. One is that Up First in particular draws on interviews with NPR's own reporters, so "the more diverse NPR is the more diverse the show will be." Currently, she said, "the pool is not that diverse."

In addition, she said, while "this is not an excuse," Morning Edition focuses on the major stories of the day, which during the year studied included such major events as the confirmation hearings for Supreme Court nominee Brett Kavanaugh. "That's a very white story and we did it for two weeks straight. We are at the whim of what the news stories are," she said.

Young said she has asked Woods to examine whether the program's pre-taped interviews include more diverse sources; she said she believes they do, citing books coverage as an example (nearly half of the sources there were female and about 25% were non-white). With more time, she said, the program can be more intentional about booking diverse sources.

Winston said of Weekend All Things Considered that the show has an advantage in that it airs only on the weekends, and thus has "several days' lead time to put together a story and think strategically and thoughtfully about who the right guests are."

They also have time to pre-interview a variety of guests to find new voices (too often journalists, not just at NPR, turn to sources they already know since it's less time-consuming). And the program's less formal "Barbershop" roundtables are a good way to incorporate new voices in "discussions that pull people from all walks of life," she said.

Finally, she said, the show has a very diverse staff, "so people are reading different things, bringing their own Rolodexes to the table."

Young also cited that as an important factor in diversifying sources. "The diversity on your air starts at the table, with the staff pitching and sourcing stories." She added that diversity is not always about race and gender, noting, "Diversity comes in a lot of different forms that we're not counting, including getting to the South, the Midwest, away from the coasts. Those are very different voices." (We wrote about NPR's staff diversity numbers last month.)

The Weekend Edition Sunday staff previously talked to the Public Editor's office about their own efforts to track and diversify their sources, which was explored in this column.

Where does NPR go from here? The tracking for 2019 is already underway and will be ready by spring, which is welcome news because it means there will not be a three-year gap in the data, as there was this past round. Keeping the issue front and center seems key, and I know from private conversations that many people in the newsroom have found the latest data to be quite sobering, as they should.

One thing we know from colleagues around our newsroom is that keeping a daily or weekly count of who's in our pieces and two-ways has an immediate effect on gender and racial/ethnic diversity. This is something you can start today.

Nancy Barnes, NPR's senior vice president of news, in a note to staff

Tracking is also being expanded to cover NPR's programming department, which encompasses the non-newsmagazine shows and podcasts.

In addition, more people inside the newsroom are talking about diverse sourcing. That kind of attention being paid internally "portends well for the future," Woods said.

But individual efforts and a simple desire to change are unlikely to be enough, particularly if NPR continues to emphasize political and government news, and relies heavily on interviews with official newsmakers. With elections upcoming next year, it's likely the recent trends will continue.

Some in the newsroom are also lobbying for NPR to institute mandatory tracking of sources. That can be accomplished by asking those who are interviewed to answer a few more post-interview questions. It's a bit more work for those doing the reporting, but could provide faster and more complete feedback. But there's a challenge there, too: Some of NPR's content is provided by newsroom staffers at member stations, and they may not be doing their own tracking (some do, however).

Still, in her Friday memo to the newsroom, Barnes said she will "be pushing to get the entire newsroom engaged in keeping real-time tabs tracking our efforts. One thing we know from colleagues around our newsroom is that keeping a daily or weekly count of who's in our pieces and two-ways has an immediate effect on gender and racial/ethnic diversity. This is something you can start today."

[Update: After we posted this column, we heard back from Cara Tallo, executive producer of All Things Considered, who joined the show in November. She said via email: "We are working now with Keith, and a small group of show staff, to create a structure that keeps intentional engagement of diverse sources as a daily priority. We are looking to rethink the way we pitch stories, who we have at the table to pitch, and where we look for sources in daily booking. We're also developing a system to track our progress over time, so that we can hold ourselves accountable going forward."]

Someone at the very top of NPR is paying attention to this issue — and that may be key.

John Lansing, who started as NPR's chief executive in mid-October, said via email that he places "the highest priority on increasing the diversity of our audience — and the only way to do that is to prioritize diversity in our work force and our content. Keith's work in this area correctly holds us accountable to measuring our progress in growing diversity in the sources we choose so that the stories we tell reflect not just our audience today but the more diverse audience we must have in the future."

As Lansing and the others have noted, workforce diversity is also crucial. Last month when we wrote about NPR's newsroom diversity numbers, Woods told me that newsroom diversity is particularly lacking in the layer of newsroom employees where "on a daily basis, a story gets pitched, an idea gets born, a decision gets made to greenlight something." The diversity of the staff, and the diversity of staff thinking, he said, "has to go all the way down in the hierarchy of the organization and touch every layer of it equally, if we're going to look and sound like America."

This column has been updated to include additional newsroom reaction.