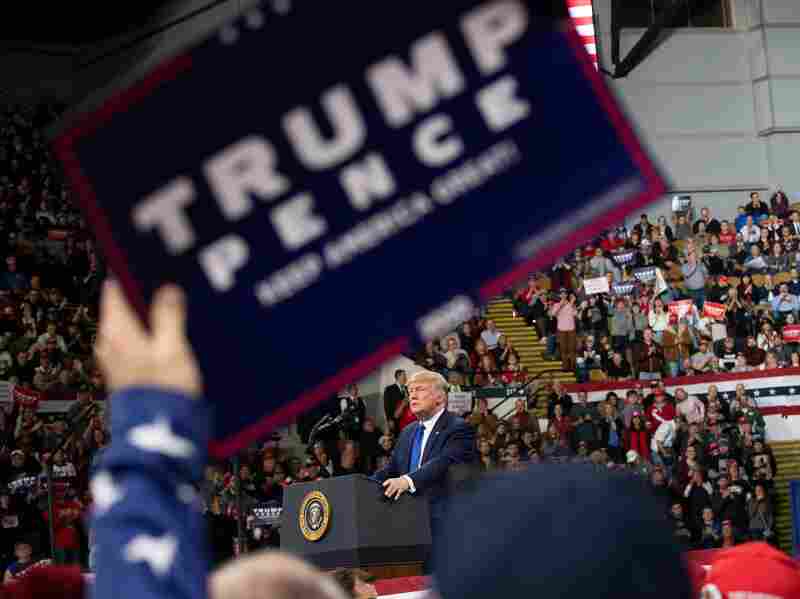 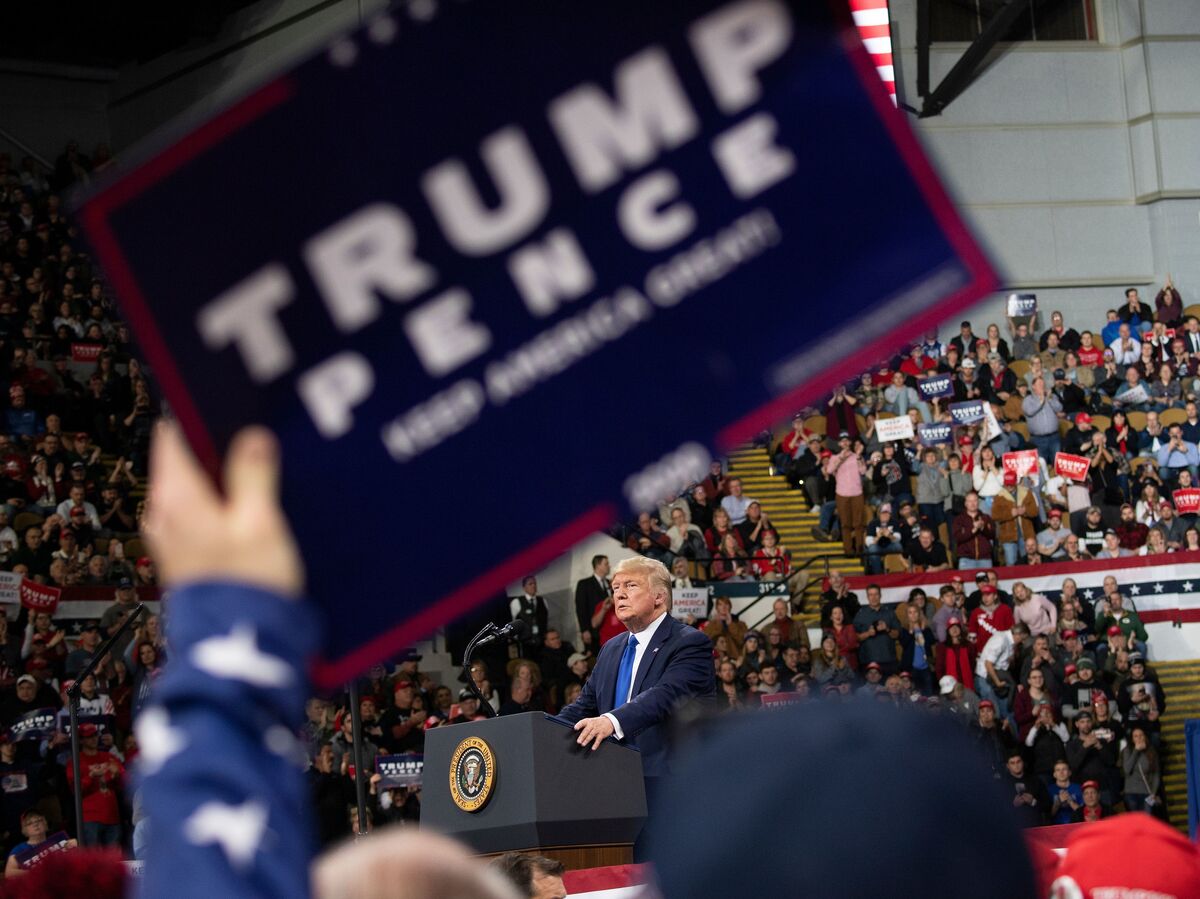 As I prepare to wrap up my five years as Public Editor, I want to look at some of the broad themes that you — the listeners and readers — have raised repeatedly with my office. No surprise, one of the biggest concerns of the last four years has been NPR's coverage of then-candidate, now president, Donald Trump.

In a bit of convenient timing, many listeners contacted my office last week to express concerns about a brief news report summarizing President Trump's Jan. 14 rally in Milwaukee. I say "listeners" advisedly, because it's not clear to me that most of those who wrote actually heard the report; many were reacting to critical opinion pieces about it by Vox and The Washington Post.

I've made a point during my tenure to focus on NPR's work, not respond to how other news outlets choose to characterize it. But I'm going to make an exception here because the sharp criticisms encapsulated a theme that runs through the concerns I have heard from one group of listeners and readers over and over. To use these critics' oft-repeated word, it is that NPR in its reporting is "normalizing" presidential behavior that is far from normal.

Here's the text of the newscast report, which was filed by a Member station reporter, edited by NPR's newscast team and ran one time only. It followed an introduction from the anchor who said the speech "ranged widely":

President Trump addressed thousands of supporters in Milwaukee on his quest for a second term. He snapped back at Democrats for bringing impeachment proceedings, repeated a debunked claim that Mexico would be paying for a wall and defended the fatal drone strike of an Iranian commander. Trump was taking on Democrats in their own territory ahead of their national convention there this summer.

The essence of the complaints was that NPR "sanitized" the president's speech, which Vox's Aaron Rupar called "a bizarre affair. The president went on a lengthy tirade about lightbulbs, toilets, and showers; touted war crimes; joked about a former president being in hell; and said he'd like to see one of his domestic political foes locked up."

He and other critics, in print and on Twitter and in emails to my office, suggested that this supposed "sanitization" was done in the name of journalistic balance. Some alleged it was done to avoid upsetting corporate donors.

Let's be clear: This is a preposterous interpretation of what happened. The criticism in this case is a bad example of what is a real reporting challenge that deserves a much more nuanced examination.

The report coming in for criticism was 22 seconds long — 37 counting the host introduction — within a 3-minute newscast. (The full newscast is longer, but many stations cut away after 3 minutes for local news, so those are the minutes that count). It ran at 8 a.m. ET, a prime newscast slot for multiple time zones. A slightly longer, more detailed version ran at 4 a.m. ET, and the rally was referenced in an All Things Considered report that evening.

Here's what else NPR crammed into those 3 minutes of that newscast:

Surely those items, individually and collectively, were more important than taking the extra time to go further in depth on the president's rally speech. Listeners looking for a summary of the most important news of the morning were far better served by the choices made. Or to put it another way to the critics: which news would you leave out?

I'd think differently if NPR hadn't already reported, many times, on the tenor of the president's current campaign rallies. Here's Don Gonyea's 6-minute report from November about a typical Trump rally, including the attacks on Democrats and the media. And here's Tamara Keith's 4-minute report from December on an early iteration of what has seemingly become the current stump speech for the candidate, in which he takes on those toilets, showers and lightbulbs.

Moreover, I don't know that it's necessary to tell listeners and readers how to feel; there are plenty of other news outlets that do that. I tend toward the "show, not tell" school of journalism. NPR has had many reports that show exactly how the president acts, going all the way back to the campaign. NPR airs, to the consternation of some of these same critics, his infrequent press conferences where his words can be heard and judged for themselves.

Could NPR's newscast unit have come up with a better version of the 22 seconds? Maybe. I'm not a newscast writer and 22 seconds is very short, but just a few choice words could possibly have better conveyed the tenor of the event. And "normalization" can happen if reporters and editors get used to thinking, "oh, that's just Trump being Trump" and forget that not every listener has heard every previous report.

So it's fair to criticize NPR for not taking enough care on any given report. Every word of every report should be chosen with precision. But it's not accurate to suggest that this was a deliberate underreporting of the story, or that NPR does this as a routine practice.

I had a number of thoughtful conversations with people in the newsroom about this issue; a few were defensive, and most were not. This is the newsroom's public response, from Nancy Barnes, NPR's senior vice president for news and its editorial director:

Donald Trump is one of the most complicated political figures in modern history. He has fundamentally changed the way a president communicates with his many constituents through traditional media, his Twitter account, his rallies and other forums. This has presented news organizations with serious challenges of how to cover a president who has broken many norms of what it means to be presidential. NPR News has provided robust, deep and smart coverage and analysis of nearly every aspect of Trump, from his candidacy through his presidency. Any serious examination of our coverage, and that of our Member stations, needs to be put into the context of our entire body of work, which we proudly stand behind.

It’s a fair question whether that one, specific, 37 second clip should have gone into more detail! And a fair question generally that we wrestle with and may get wrong. But @atrupar uses 37 seconds to generalize about “the media,” and assumes bad motives with no evidence.

Peter Sagal, the host of Wait Wait...Don't Tell Me!, doesn't work in the NPR newsroom, but he had some thoughts as well:

I know many people would love for the reporter to take her twenty seconds or so and say, "The President ranted and raved incoherently for an hour, as is his wont." but that's what Twitter is for.

As I said up top, this is representative of an issue that has come up many times over the last four years, in what we all know by now is a new era for journalism. NPR listeners and readers have a right to expect NPR to provide accurate and clear-eyed coverage of a president who repeatedly says things that are simply not true and who routinely violates what had been the contemporary standards of speech that we expect from our political leaders.

I should note that I hear from an entire other set of listeners and readers who find such reporting evidence of "bias" against the president, which of course is a theme that Trump pushes. But if NPR is doing its job, its reporting will be such that listeners and readers can decide for themselves what to think of the president's words and actions. As one Texas listener wrote: "I donate for a reason. To hear the truth, unfiltered."

Many will choose to vote or make judgments based on the president's policies, not on his demeanor. And that's a far bigger concern for me, when misinformation about the facts on which those policies are being promulgated gets through in live interviews and when falsehoods are repeated without extensive "truth sandwiching" (noting both before and after that a statement is not true) and political disparagements get airtime because they are pithy soundbites. It's a concern when politicians of any stripe are allowed to push talking points without being sufficiently challenged. I have heard all that on NPR, at times, but it's far from the norm. More on that soon.