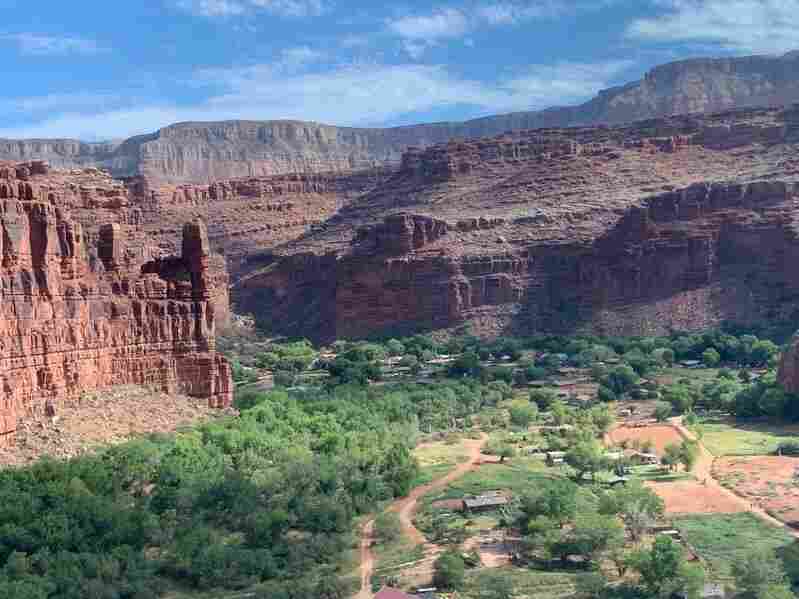 About 450 Havasupai live in the remote Supai Village at the bottom of the Grand Canyon. In 2019, the tribe got broadband access for the first time. Laurel Morales/KJZZ's Fronteras Desk hide caption 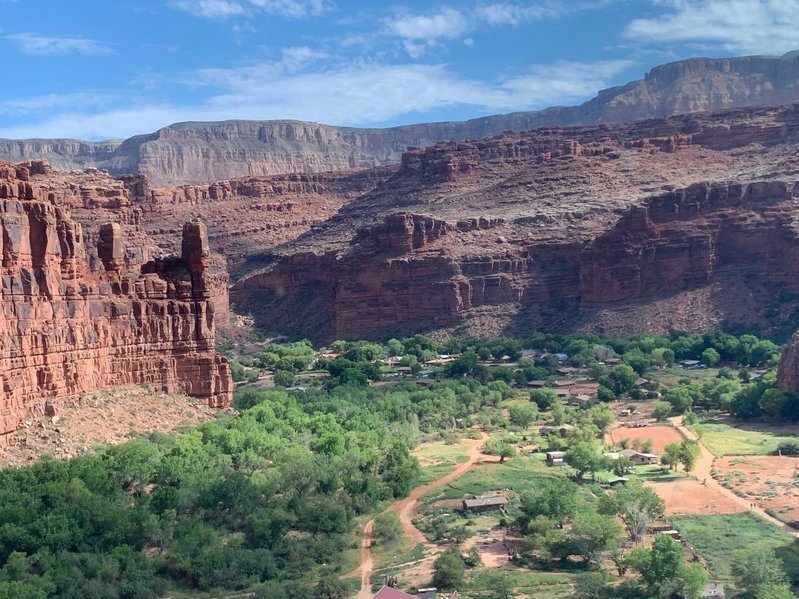 About 450 Havasupai live in the remote Supai Village at the bottom of the Grand Canyon. In 2019, the tribe got broadband access for the first time.

Late last year, many listeners and readers rightly objected when NPR released statistics tracking the diversity of its on-air sources and didn't include a category for Native or Indigenous sources, because the numbers were so low.

As Keith Woods, now NPR's chief diversity officer, acknowledged at the time, the figures should have been included anyway. He said that among the five radio shows whose 2018 sources were tracked (using sample weeks), "Native sources were 1% or below on all but Weekend All Things Considered, where 3% of sources were Native American."

The questions raised by the controversy prompted us to go back and look a bit deeper at NPR's coverage of Native issues, including the number of stories in recent years and how NPR did on some "best practices" metrics. These include quoting Native sources when reporting on Native issues. (That's a best practice for all reporting; reporters should make every effort to have people who are involved in or affected by issues speak for themselves, rather than talk about them or quote others talking about them.) Another metric we looked at is how often Native sources were identified by their specific tribal identification, following the Associated Press Stylebook guidance. The Native American Journalists Association has more.

With assistance from NPR's Research, Archives and Data (RAD) Strategy team, we reviewed stories focused on Native and Indigenous communities in the U.S. and Canada that ran on NPR's five newsmagazines as well as digital stories on npr.org, in the 2018 and 2019 calendar years. We looked at all stories, not just sample weeks.

An important note: The numbers underrepresent NPR's actual coverage because they do not include audio stories that are heard on Here and Now. That show is a joint production between NPR and Boston station WBUR, and its stories are not included in the NPR RAD database (although, confusingly, they are linked at NPR.org). In addition, our overview is only for national reporting by NPR; a number of public radio stations across the country have robust local reporting about Native and Indigenous communities. Tribes themselves own and operate vital stations, and organizations such as Native Voice One distribute the work of Native producers nationwide.

Looking just at NPR's five newsmagazines and NPR digital stories, coverage of Native American and Indigenous peoples increased in 2019 from the previous year. NPR ran 86 stories in 2019, up from 70 in 2018. (If we included stories about Central and South American Indigenous communities, the numbers were 96 and 73, respectively.) About one-fourth of the 2019 stories were reported by staff from NPR member stations, including the collaborative Mountain West News Bureau, which expanded in 2019.

The number of stories without a Native voice seemed high. Many of those stories, however, were book reviews, legal decision coverage or conversations between a host and a single source, often a reporter from another news outlet covering a story.

Numbers can't come close to giving a complete picture of the network's coverage, of course. A qualitative assessment, when so many stories are involved, is harder to produce.

As near as we can tell from looking back over the last two years, our office heard specific concerns about three stories dealing with Native American issues. This column extensively chronicled the concerns about a Dec. 17, 2018, report about the Indian Child Welfare Act here. We also heard about a mistake in this piece, since corrected, which initially, at one point, described the Navajo Nation as a "group," rather than the nation that it is.

I asked Brian Bull, a reporter for NPR member station KLCC in Eugene, Ore., for his thoughts on NPR's coverage overall. Bull, an enrolled member of the Nez Perce Tribe, has worked in public radio for more than two decades, including a stint at NPR, and thus has a familiarity with the reporting.

Bull's view is that of the major media outlets that are non-Native focused, NPR's coverage of Native and Indigenous communities is the "most culturally aware, sensitive and receptive," covering a number of issues, many of which are highly complex, "fairly and accurately."

He said NPR has generally done a good job highlighting important topics, including treaty issues and missing and murdered Indigenous women. In much of its coverage he said, NPR has taken a journalistic approach focusing on solutions to problems, unlike some other outlets which do what he called "hit and run reporting" on reservations and the tribal communities that cite the "same depressing statistics about suicide, poverty, unemployment, lack of education, lack of proper health care." NPR, he said, has reported on proactive measures by Indigenous people themselves, such as a self-defense class run by Native women for Native women, and a Navajo midwife who is training other Navajo Nation women to become doulas.

The coverage, he said, has also encompassed the arts and history.

Jason DeRose, NPR's Western bureau chief, edits the vast majority of reported stories on the beat. He said he indeed aims to keep the coverage wide-ranging, citing recent stories about broadband connection being installed on a Havasupai reservation on the floor of the Grand Canyon and the Navajo Nation moving towards renewable energy, in addition to continuing coverage of violence against Native and Indigenous women.

DeRose called Native and Indigenous peoples "vastly under-covered communities in America." He assumed oversight of the coverage a decade ago, and "Prior to me doing this I'm not aware of anyone else taking this on," he said. His lobbying for stories internally, and his frequent requests to member station reporters to pitch him stories for the national newsmagazines, have led to more coverage, he said. Indeed, according to figures we compiled, NPR had 55 stories on the topic in 2008 and 59 in 2009.

Graham Lee Brewer, a Cherokee Nation member who is a contributing editor at High Country News and also reports regularly for NPR, said DeRose takes "really great care" to include as many Indigenous stories as possible given his workload. Brewer, who also serves on the board of the Native American Journalists Association, said among national news organizations, NPR does not "fall into a lot of the same stereotypes and tropes that other places do." Nonetheless, he said, NPR's coverage still has a focus of "an outsider looking in."

That thought was echoed by Tristan Ahtone, associate editor for Indigenous affairs at High Country News, and the president of the Native American Journalists Association. Ahtone, a member of the Kiowa Tribe, has also reported for NPR in the past. He said he finds NPR's coverage is often "about" a community, instead of being "for a community."

Laurel Morales, a Flagstaff-based reporter for Tempe, Ariz., member station KJZZ, works with DeRose to report many of the stories about Native communities that end up on NPR. She said she tries to avoid stereotypical tropes by working hard "to not go back to the same sources again and again, so that I'm talking to individuals and not generalizing." She talks about specific individuals, identified by tribal affiliation, and makes sure to avoid suggesting they are representative of "all Native Americans.

"I think what's important is to take each story case by case instead of saying, 'Oh, I want to report on alcoholism in Indian country.' That's not the way I go about my reporting. It's: 'oh, they're opening a treatment center in Holbrook. Why? Why are they doing that?' And going from there."

Avoiding some generalizations can be challenging, she added, when she has only four minutes to tell a complicated story, and wants to nonetheless acknowledge the "multigenerational trauma that many tribes have experienced."

Reporters Brian Bull, Brewer and Morales all named one area where NPR could improve: hiring newsroom staff members who are Native. According to the most recent figures NPR provided us, just one person from NPR's newsroom staff of 416 self-identified as Native American or Alaskan Native in fiscal year 2019.

There's a sense among Native and Indigenous people that newsrooms, not just NPR's, "have a hard time trusting Natives to tell their own stories," Bull said.

He called the "meager number" of national Native and Indigenous public radio reporters a "puzzle," adding that, "we're out here, we're practicing." And, he added, "there's an argument to be made that having a Native person on the story can open doors." The potential payout of having more Native reporters on staff, he said, would be "authenticity and accessibility to tribal communities that may otherwise be wary of how media at large has reported on them."

Morales, who is a non-Native journalist and has been covering Native communities for roughly 10 years, said "it would be really wise for NPR to hire a full-time journalist who is Native American." She said, "More and more we have to ask ourselves the question, am I the appropriate person to tell this story?"

There are two sides to that argument, she said: there are "benefits from not being from a place and, you know, having a fresh perspective. And I think there's also a very strong case to be made for someone who has lived the history and the experiences and the realities that they report on."

For Brewer, the public education system failed in that "It took my history and it took my history from you, too. And so it's no surprise that the colonial establishment doesn't want to talk about genocide with its children, the genocide that it perpetrated. But that is all a part of our understanding of those communities." That, he said, "is why I think hiring Indigenous people to cover their own communities is so important."

Editor DeRose said at least for NPR there is not a lack of trust when it comes to Native reporters reporting on their own communities. "It can make for better informed reporting," he said. "We value people knowing something about people they are reporting on."

He said he actively seeks stories "from Native reporters about Native peoples." Adding one Native American staff reporter would be good, but it would not be enough, he said; "we should have more than one, we should have producers and editors and reporters."

That desire for more resources is one I hear often at NPR, a wish for an extra reporter here, another editor there. While the newsroom's efforts to increase coverage of these historically under-covered communities is an important trend, adding more editorial resources here should also be a priority.

Addendum: As we were working on this column, we learned that NAJA was finishing up its own assessment of how a number of major news outlets, including NPR, cover Native and Indigenous affairs. The database of NPR stories it used was quite small compared to ours, but one finding was encouraging: Of the five news outlets surveyed, NPR came out on top in terms of the ratio of Native and Indigenous sources quoted in stories compared to non-Native sources.

Christine Trudeau, an enrolled citizen of the Prairie Band Potawatomi Nation, serves on the board of directors for NAJA and is a former NPR intern. Trudeau, currently a freelance journalist, worked on the NAJA study and praised NPR for releasing its statistics on the diversity of on-air sources, even if they "were pretty terrible." She added, "when you look at the expanse of Indian country and when you think about how each individual nation is a sovereign nation, that means it's its own government: that's 574 federally recognized tribes, that's 109 state recognized sovereign nations. So, there's just a lot out there in terms of diversity and in terms of the public understanding that complexity."

The link to the full study is here.