It's Slovakia, Not Slovenia!

It's Slovakia, Not Slovenia! 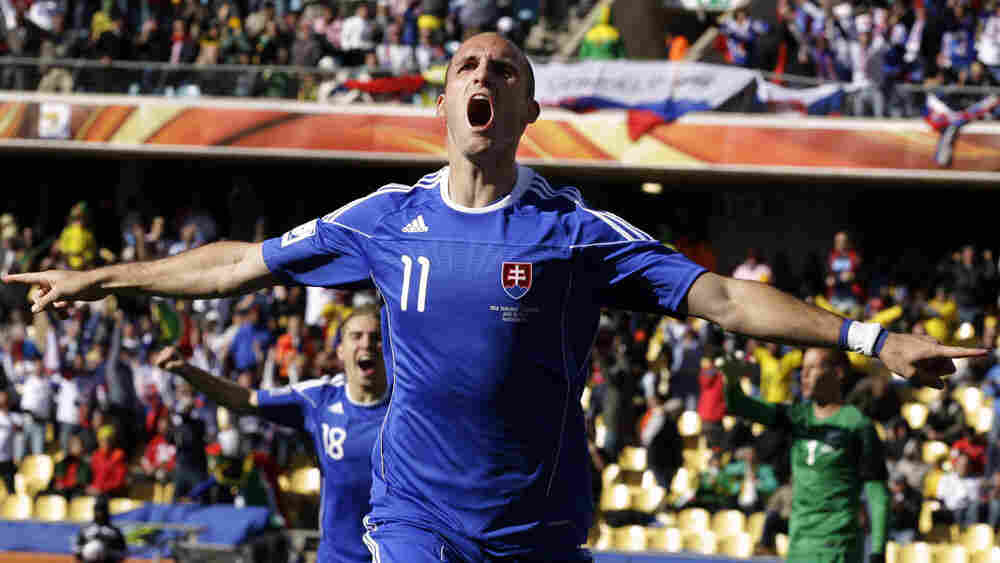 Slovakia's Robert Vittek celebrates after his goal against New Zealand.  The match ended in a tie: 1-1 ASSOCIATED PRESS hide caption

I took a break from my usual World Cup headquarters this morning to catch some Slovakia vs. New Zealand action down at Korzo, a restaurant in my neighborhood owned by a Slovakian couple, Otto and Maria. I found a small, but jubilant, crowd when I arrived right after the start of the second half; Slovakia's Robert Vittek had just scored.

With everyone relaxed and happy, I took the opportunity to ask the crucial question on everyone’s mind, "Does it bother you that people mix up Slovakia and Slovenia all the time?"

Otto and Maria nodded. "It is really annoying," Maria said. "Sometimes they even send mail to us in Slovakia and it winds up in Slovenia. We get it two months later."

Of course things were different before the Velvet Revolution -- followed a few years later by the dissolution of Czechoslovakia into the Czech Republic and Slovakia -- both for soccer in that part of the world, and, presumably, for postal service to Slovakians.

Otto grew up supporting the Czechoslovakian team, which obviously had a much larger pool of players from which to draw its squad than either of the smaller, separate countries have individually. And, back in the day, Czechoslovakia was a real contender -- finishing as runner-up in the World Cup twice, in Italy in 1934 and Chile in 1962.

Although Slovakia failed to deliver another goal in the second half, the mood stayed elevated and confident at Korzo -- up until the 93rd minute, that is, when Winston Reid equalized for the All Whites with a nifty injury time goal.

"I’m alright," sighed Otto, as he slinked out of the restaurant and into the sunny glare of Brooklyn’s Fifth Avenue. But Andy, another Slovakia fan in the house admitted he was pretty bummed. "It’s possible to draw against Paraguay," he said, then added, with a flourish of fine Eastern European fatalism, "Destiny is out of our hands.