Accessibility links
World Cup Doesn't Need Replay; It Needs Fairplay : Show Me Your Cleats! - World Cup 2010 Blog Blown calls have led people to clamor for instant replay. But that won't help -- instead, it's time to fix a system that’s paternalistic, exclusionary and destined to fail -- in short, it's not unlike several economies in Europe. 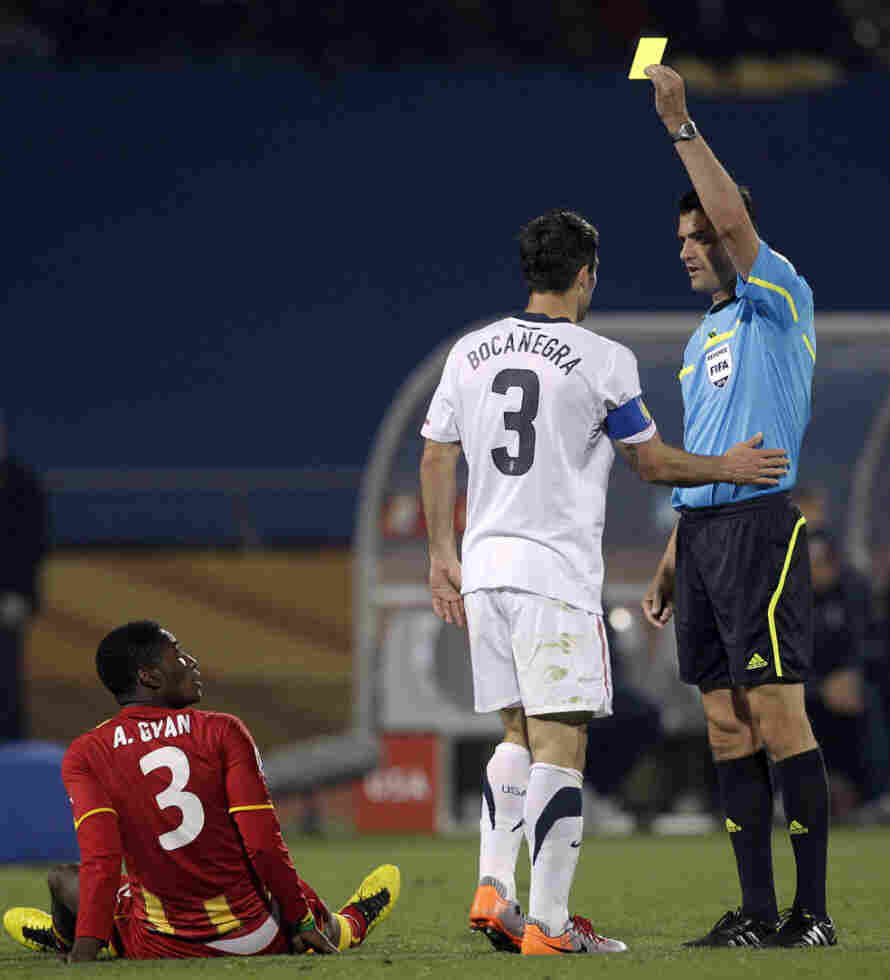 With the World Cup's Round of 16 under way, a rash of bungled calls -- and the near-disastrous effect they had on the U.S. team -- has Americans fuming. Disallowed goals and "mystery fouls" are now the norm. And referees have come to resemble Sphinxes -- quiet, powerful and full of riddles.

Another example came in Sunday's Germany-England match, when officials missed noticing that Frank Lampard's shot had entered Germany's goal for a potential equalizer in the first half.

That's led many people to call for instant replay. But that's a silly idea, one that would drain the sport of the beautiful momentum that can make a 0-0 game fascinating. Still, I don't agree with FIFA president Sepp Blatter, who justifies the status quo by saying, "Society is not perfect, football is not perfect."

Aside from giving me something cool to say when I'm having a "discussion" with my girlfriend (just insert "Bill" for "football"), that statement is useless; it borders on the perverse. And it ignores a basic truth: It's time for the soccer-powers-that-be (or, the football-powers-that-etre) to change how they officiate games.

The problems go beyond Koman Coulibaly of Mali, who threw out American Maurice Edu's goal against Slovenia. Even before the final stage of the Cup, a referee missed handballs and other transgressions by France, in a match that gave them a spot and kept Ireland out. And in Brazil's first-round win over Ivory Coast, referee Stephane Lannoy was seen laughing with Luis Fabiano after missing his handball on a scoring play.

Are all these guys on the take -- or maybe just evil? No -- it's just that their flaws are magnified by a system that’s both broken and slanted. Here are some of the problems I see in World Cup soccer:

And only one official -- the referee -- roams the field. Combine that with the perpetual motion mentioned above -- or, to put it another way, 90 minutes of near-continuous chaos -- and you realize that only a superhero could keep these games fair and under control.

Having one man follow the ball all over the pitch is like baseball's homeplate umpire chasing baserunners around the diamond, calling balls and strikes along the way. Because don't forget, the main responsibility of half of soccer's officiating crew is just to jog along the sideline and raise a checkered flag once in a while.

And that leads to the next point: Since soccer officials rarely collaborate on calls, the "wisdom of crowds" approach is out the window. Until recently, the "fourth official," who manages time and substitution issues, wasn't even expected to speak to the match referee.

My last point is related more to confidence and inclusion. Consider this: the U.S. doesn’t have a single referee in the Cup, but tiny Seychelles does – and they’re not even in the tournament. And Uruguay, for whatever reason, has six; Mexico has five.

I'm sure most of those guys are qualified -- but the idea that America doesn't have a single official capable of refereeing -- or, for the love of Pele, able to raise a checkered flag once in a while -- is ludicrous. Being left out of the referee mix just feeds the paranoia of fans who think games are rigged.

Take all those points together, and you get a picture of a system that’s paternalistic, exclusionary and destined to fail -- in short, it's not unlike several economies in Europe.

Maybe that's why U.S. coach Bob Bradley and his team took the setbacks in stride. They actually seemed surprised by the uproar over the bad calls, and the lack of explanation for them.

"FIFA operates differently. Soccer is a different game," Bradley said. "From our end, we get used to that. We all have friends and family who ask us the same questions that most of you ask us, and you end up saying, 'That's just how it is sometimes', and you move on and get ready for the next game."

When an organization embraces opportunities for unfairness and ineptitude with the zest FIFA has shown, you really can't be shocked by the result.

The World Cup would be better off if FIFA bagged the talk about humanity and imperfection and took a few pages from the folks running Wimbledon -- a tournament that openly pursues perfection. When a tennis match starts on Centre Court, there are 11 officials watching the field of play -- the chair umpire and 10 line judges.

If you're hoping to see that many referees in soccer, don't hold your breath. But before we see video replay and other technology being used in the World Cup, it'd be nice to see how well the officials could do if they're put in a position to succeed.