Accessibility links
What Kind Of Soccer Fan Are You? : Show Me Your Cleats! - World Cup 2010 Blog Soccer fan and Cleats contributor Rosie Schaap writes about the seven types of soccer enthusiasts. Are you a "citizen" or an "ogler," or are you the "windbag" we all love to shush?

What Kind Of Soccer Fan Are You?

What Kind Of Soccer Fan Are You? 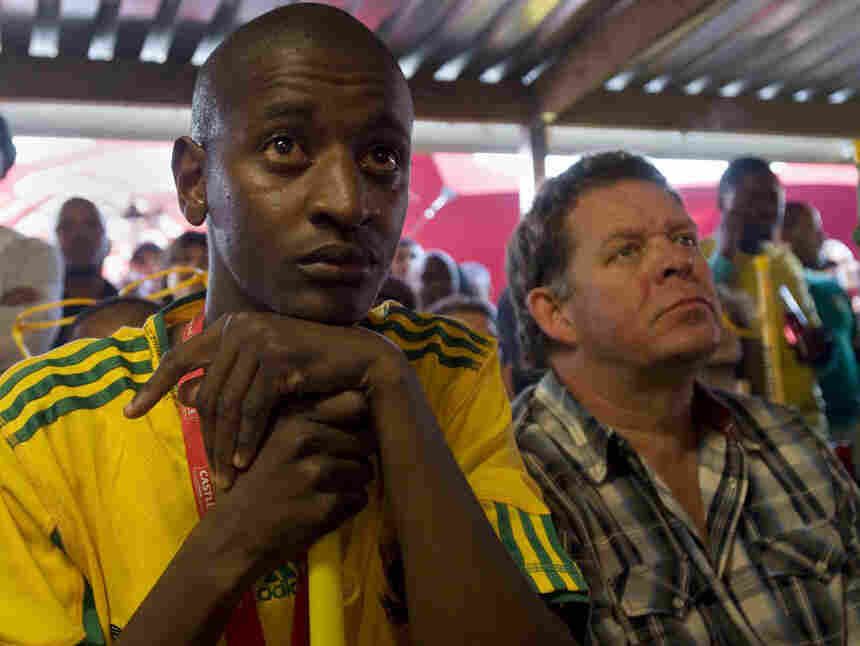 A professor shattered the illusion of individuality in one brutally efficient pronouncement. He’d been talking about literary critic William Empson’s book Seven Types of Ambiguity, and at the end of class he said, “There are only seven types of people, too,” before gathering up his papers and books and heading out the door.

His remark had a ring of truth; I shuddered to think which type I was. Now, having spent a good part of the last two weeks in the company of my fellow World Cup watchers at the Black Horse Pub, I’ve ID’d seven types of us, too:

Best to steer clear of these loud, wild-eyed nationalists, unless you’re a compatriot—and even then, you might think twice about shaming your nation by association. At best, the Citizen can amuse you with elaborate ensembles in his or her country’s colors, and a repertoire of lively chants. Still, does he really need to get his beery mug all up in your face while shouting (fill in name of motherland here) at intimately close range? At worst, the Citizen cheers when members of opposing teams get injured—and that’s ugly in any language.

No, I’ve never actually seen one— because the Hermit cannot bear to watch soccer in public. Yet I persist in my belief that the Hermit exists; like the unicorn, its legend is known far and wide. The Hermit cannot abide the din of other fans—and cannot bear feeling exposed for all his or her raw emotions, which are, paradoxically, both overwhelmingly powerful and heartbreakingly tender where soccer is concerned. The Hermit, as my friend Geoff explains, must “stay home in front of the telly with a can of beer and a packet of crisps,” suffering, or celebrating, in solitude. I respect you, Hermit. I even think I understand you. I believe in you! But I hope you’ll come out and watch a game with me some day—if only so everyone (except Geoff) doesn’t think I made you up.

Some hoverers not only have zero interest in soccer—they also can’t wait to tell you why. They love to announce how boring it is, how insufferably low-scoring it is, and how much they hate it, all while blocking your view and otherwise disrupting your World Cup enjoyment. Most hoverers, however, are benign: along for the ride, they want to hang out with their chums, drink some beer, maybe glance at the game every ten minutes or so. And that’s fine, gentle hoverer, as long as you promise to stand and not take up valuable barstool space. (Noteworthy subspecies: The Spouse).

You know the one whose commentary exclusively runs along the lines of: “Check out that midfielder’s butt”?  Yeah, her. And sometimes him, too.

The Windbag opines brazenly and shamelessly—whether he knows what he’s talking about or not. He cannot be stopped. Worst of all Windbags is he who constantly peeks at his Blackberry during a game, the better to dazzle you with World Cup trivia HE ONLY LEARNED THREE SECONDS AGO. You might want to roll your eyes. You might want to tell him to relax and just watch the game. Won’t make a lick of difference. And please don’t bother arguing with the Windbag; it will destroy your soul. Just back away, slowly, until he moves on to another victim.

The Chronic, Enthusiastic, and Frequently Mistaken Caller of “Offside!”

Any fan who takes sheer pleasure in watching the game—regardless of nationality, expertise, emotional stability, fondness for toned posteriors, any of that—is the Real Deal. And I think that accounts for most of us.

But once in a while you encounter a special subspecies of the Real Deal: the Soccer Savant. Take Greg, for example. Born in Kharkov, Eastern Ukraine, a supporter of Metallist Kharkov and FC Spartak Moscow, he says he’d be rooting for Ukraine or Russia—if either team had qualified. Among the many I’ve heard say, oh, I’m not rooting for a team, I’m rooting for the game—he’s one I believe, one whose objectivity can’t be doubted. Not only does he deeply love soccer, he knows a lot about it—and imparts his knowledge in a calm, cool-headed manner that never feels didactic. I’ve learned a lot just by sitting next to him during a few matches down at the pub.

Maybe there’s a little bit of each type in all of us. Even Greg admits to a Citizen-like moment during qualifying matches, when Russia was knocked out of the competition by Slovenia. “I had a public meltdown,” he told me. That’s understandable: If one’s emotions are stirred by the game, one cannot be expected to be cool and collected all the time.

Have you encountered other types of World Cup watchers?  Let us know in the comments, below.