Accessibility links
Yeah, I Said It: The World Cup Trophy Is Hideous : Show Me Your Cleats! - World Cup 2010 Blog Trophies are cool, but with the lone and prominent exception of the Stanley Cup, 'Cleats' contributor Laura Lorson thinks the *idea* of the trophy is cooler than they actually are.  And she thinks the World Cup trophy is creepy.

Yeah, I Said It: The World Cup Trophy Is Hideous

Yeah, I Said It: The World Cup Trophy Is Hideous 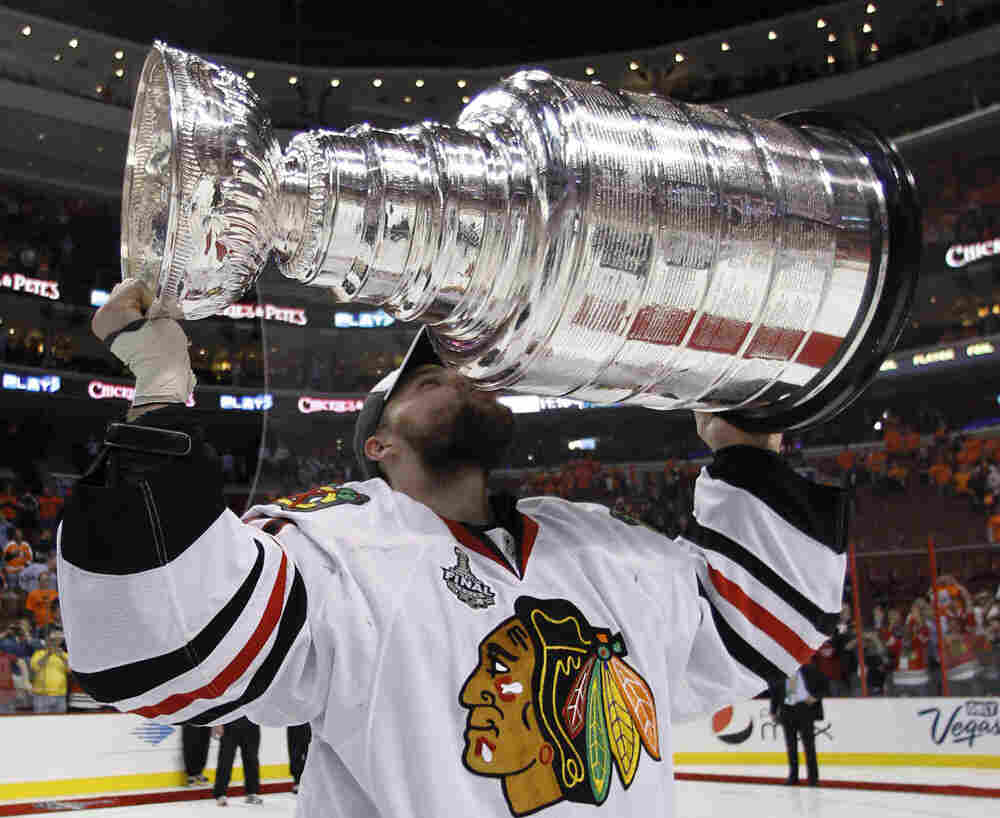 Trophies are cool, but with the lone and prominent major exception of the Stanley Cup, I think the idea of the trophy is cooler than they actually are in real life.

When I was little, I really wanted to win a trophy -- when I did, some years later at an academic competition, it was somehow less grand than I thought it would be.  From afar, it looked triumphant and substantial, weighty and grand.  Up close, it was obviously cheap plastic and electroplate.  And, it was disappointingly lightweight.  Also, in an ironic twist, they spelled my name wrong. 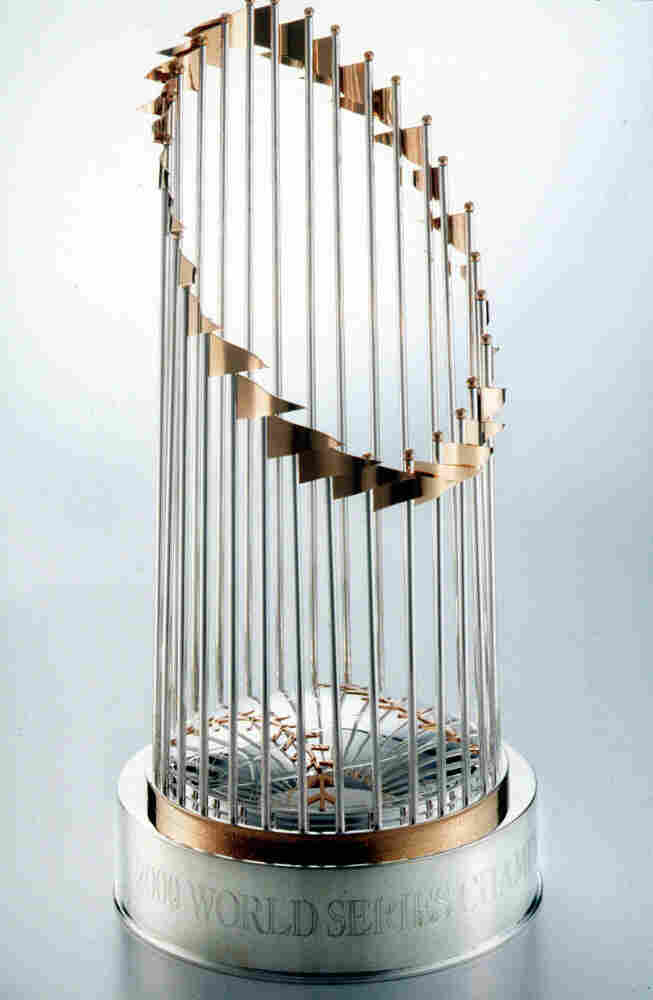 I think the Commissioner's Trophy in Major League Baseball seems stately and dignified and generally nice. I like all the pennants. I also have no real problem with the Vince Lombardi Trophy, though I would have re-thought the whole fingerprints issue and the football on top looks strangely sinister and menacing -- I think it's the angle at which it's mounted.  Makes me think of the Hindenburg.

The NCAA trophy has the same panache and style of a "Good Citizenship" plaque awarded to every upstanding, rule-obeying, perfect-attending junior high school student since the dawn of time. It's not bad -- I just don't think it's especially good.

So now we come to the trophies that I think are really ripe for a remake.  The Larry O'Brien Championship Trophy looks very random and slapdash to me -  like someone tossing a Nerf ball into a gold-plated wastebasket. I'm certain this is not the case, but it kind of looks like someone had to come up with an idea really fast and this is what they went with because it's what they could get from the sculptor and engraver on short notice.

The BCS Trophy seems incongruous, though it catches the light nicely...but it seems like the kind of thing my mother would have come up with: "You know what you could do? Make the football look quilted. Make it seem soft, fit in with my country cottage day-cor. You can't go wrong with quilts and geese." 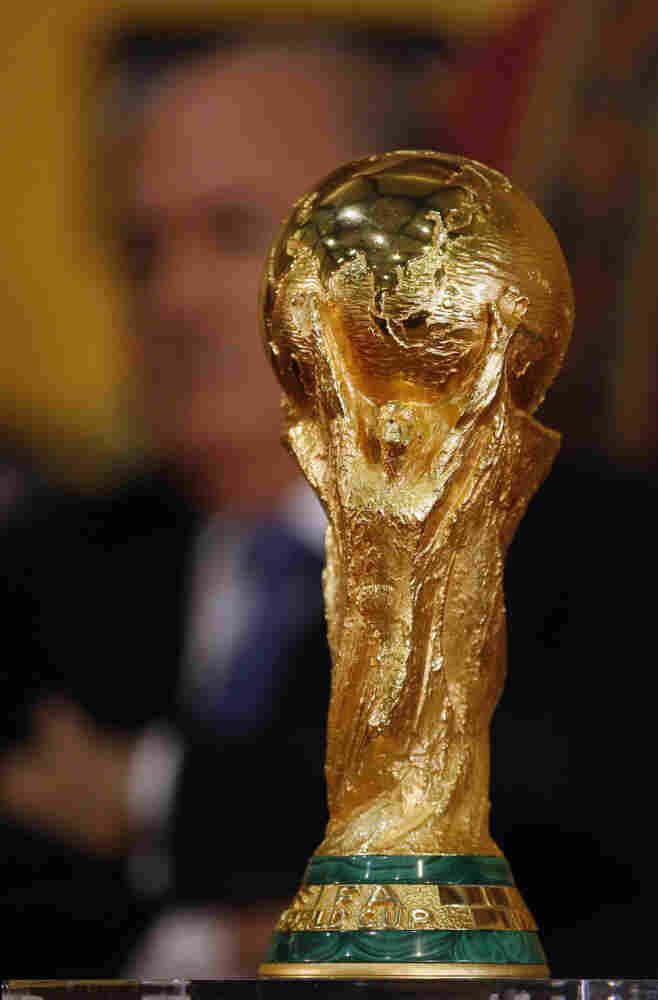 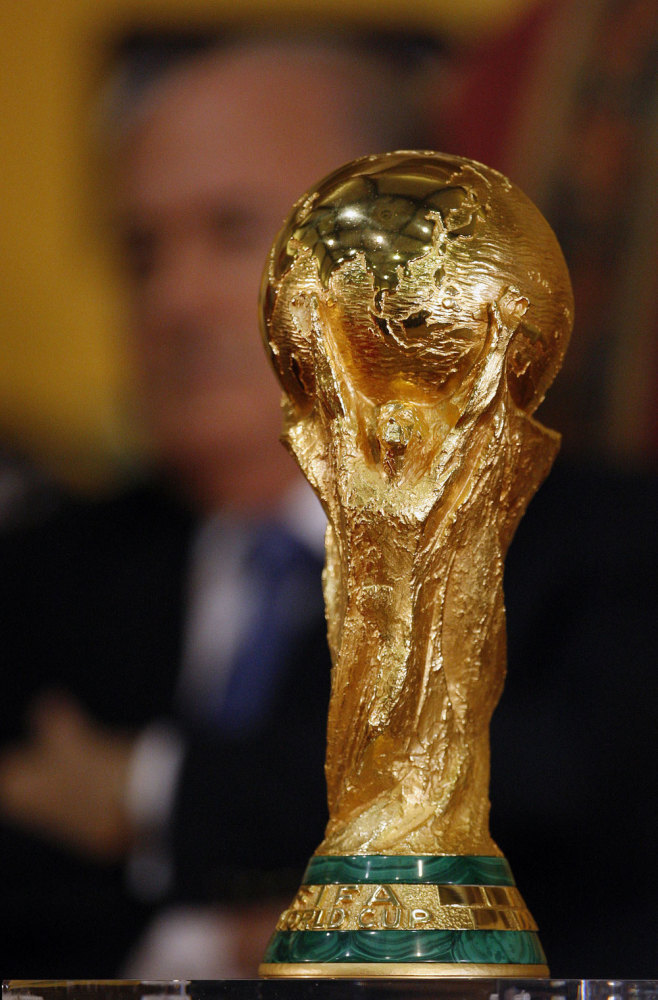 Not really the image you want to conjure up with a real macho sport like football, I guess.

But of all the trophies, I would have to say that the FIFA World Cup Trophy  is the one that really freaks me out.

I'm sure it's different if you actually win one of these, because I am aware that this is a very big deal indeed.  But it looks like HR Giger designed it:  the "Alien" of trophy design.  I've never seen it up close, but in the pictures I have seen, it seems to be all webbing and arms and people supporting the world in such a way that they look like a giant talon-y claw.

Frankly, it's just kind of creepy.  Again, this is from a distance, so what do I know, but when I see it on TV, my initial thought is always "Gah! What IS that thing?"

The original trophy for the tournament was called the Jules Rimet Trophy, and it was this winged, vaguely Art Deco, kinda Soviet Realism, reminds-you-of-the-art-of-the-WPA Nike-looking woman holding a bowl on her head...which was apparently not weird enough. They got the current trophy in 1974 after holding (of course) a contest that was (of course) won by an Italian, so it has that this it's-really-expensive-and-classy-and-you-are-too-vulgar-and-provincial-to-appreciate-its-Avant-garde-excellence look to it.

Not like the Stanley Cup at all, which is completely awesome and super-obvious what it is...a cup. With a bunch of rings underneath that they've kept adding on. With a gazillion names on it.  And it is substantial and historic and remarkable and not the least bit creepy at all.

I'm willing to be wrong about this, but I don't think I am.

What do you think is the best (or worst) trophy?

Laura Lorson is a native of Louisville, Kentucky. It was there that she learned how to read, write, and make the occasional decent piece of fried chicken. She is a frequent commentator on All Things Considered.